The Blair Witch franchise is a weird one with its roots stemming in a VERY low budget late 90’s film that turned into a massive success, spawning sequels and video-game tie-ins over the following decades that have ranged in quality with more than a few falling on the lamer side of things.  Blair Witch VR is a port of the 2019 release which has you in the role of Ellis, a former local police officer with a troubled past who has decided to join in the search for a child who went missing in the Black Hills Forest. 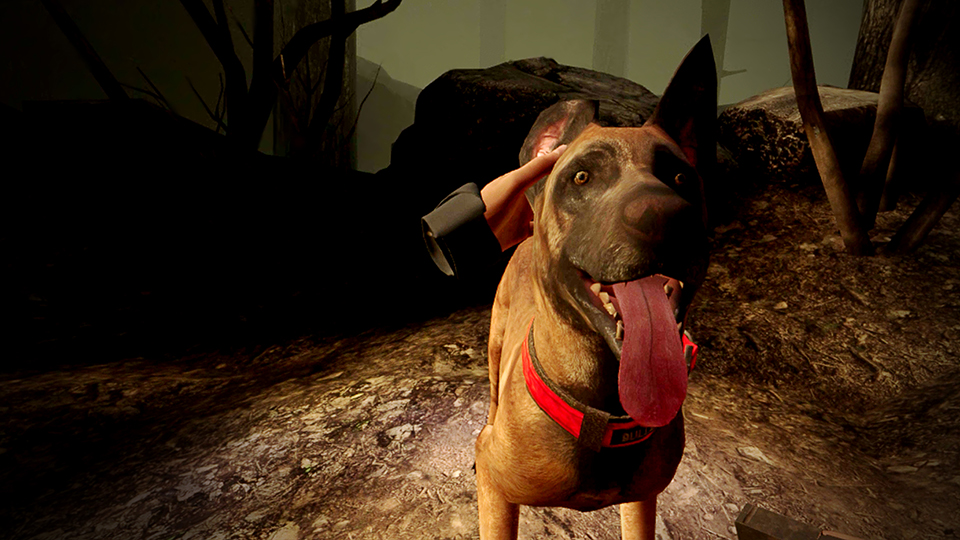 Say high to bullet, He’s about to be your best friend!

Wandering through this supposedly haunted forest, you’ll need 2 tracked controllers with locomotion being handled largely by your left hand while turning is done with the right.  It’s a full locomotion affair though their options for teleport and click-turning should you need them with any items needed strapped to your chest including a flashlight, cell phone, camcorder, and dog whistle, all of which will be needed throughout the story.  Unlike almost all other horror titles, you are not alone as by your side is your trusty dog, Bullet, who not just helps guide you through the forest, but also just aids in keeping you company and stemming off madness and has a few commands that can have him stay close, seek out items and scents for you to follow or just give a him snack.  Ellis, you see, suffers from PTSD and is prone to bouts of paranoia and delusion but Bullet, always seems to centre him which matters more and more the further you venture into the forest and Ellis begins to lose it…or is he?  The Blair Witch franchise has always been about paranoia and the unknown and that combo has been gamified quite nicely with some light puzzle elements thrown in that make this feel like you are playing through a Blair Witch Movie.  The camcorder is arguably the coolest feature as not only do found tapes shed light on what is happening but playing those tapes in certain ways can affect the world around you causing items to appear where they weren’t before and even moving objects blocking your path. Throughout the game you’ll be in contact with the Sheriff via radio and your ex using your cell phone, which can be a fun distraction as it’s loaded with messages and games if you are looking to take a break from the horror.  When things get dark, and when you might find yourself alone, your light is your only ally and won’t just be needed to see what’s ahead but is used to defend yourself from the ghouls that stalk you during some sections.   The puzzle elements and more dramatic moments in the game keep this from feeling like just another VR walking simulator as the game throws enough mechanics in your path to keep things feeling fresh as you never know what the game is going to throw at you next. 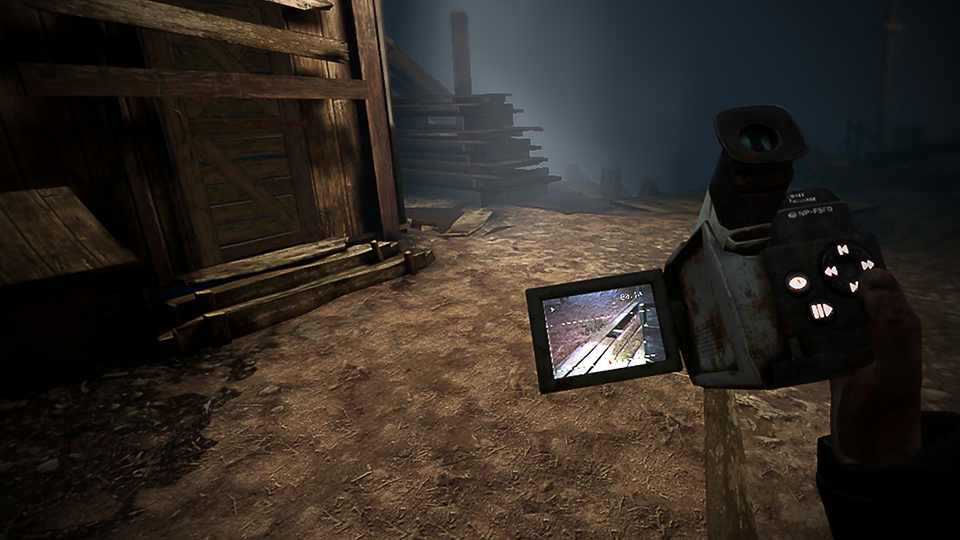 The camcorder is a great gameplay element!

I’m not going to say Blair Witch VR is the prettiest game I’ve ever seen, far from it in fact, but it looks substantially better than Bloober Teams previous effort in Layers of Fear VR by often changing up your surroundings.  The game plays in a relatively linear fashion as you can only stay on the beaten paths in the forest with some sections only offering you the option to move forward along a singular cave path or in a vision marked with clear barriers.  You’ll start your search in the twilight hours with the sun offering a nice respite from what lies ahead with the game only getting darker and more solitary the longer you play.  When in the dead of night, the moonlit shadows of the treetops can just be seen while your finicky flashlight offers a narrow glimpse of what lies ahead, adding a great sense of trepidation, especially when you start to see weird things just out of sight.  You are just a pair of hands with your items floating on your invisible chest with Bullet being the star of the show as he guides you through the game, barking when he wants your attention and running off, always returning if you take too long to follow.  Environmental lighting is static with some trickery being used when it comes to your flashlight, lighting up whatever it’s pointed at, but never casting shadows, hampering immersion somewhat, but it still looks fairly good.  Most of the game is safe from pop-in thanks to the claustrophobic environmental design, but in some of the larger sections, and a mid-game rail car ride, distant trees and objects will magically appear once again hampering immersion.  As this is also a port of a flat game, the cinematics are not 360 but flat so you’ll just have to sit back and watch the 2D mini-movies and as they are still shown in 1st person view, they can feel a little awkward.  Delusions suffered later on can really mess with you as the environment may change before your eyes, your vision may shudder or darken and in combination with the dark and disturbing forest and the bizarre situation you find yourself in, it makes for a solid horror experience.

A VR horror game needs proper 3D audio and Blair Witch delivers an on-point experience that gives the game a great cinematic quality.  Ellis often talks to himself or bullet creating a bulk of the narrations outside of the brief radio and cell phone calls you’ll be making and answering throughout the story.  The music is typically ambient, falling into the background with a subtle, unnerving hum when the situation demands a little more tension or may be a little apparent during some of the more dramatic sessions.  When you are just exploring though, it’s typically the sounds of the leaves crunching under yours and bullets feet in combination with the noises of the forest around you making up for the lacking visuals with some great audio design. 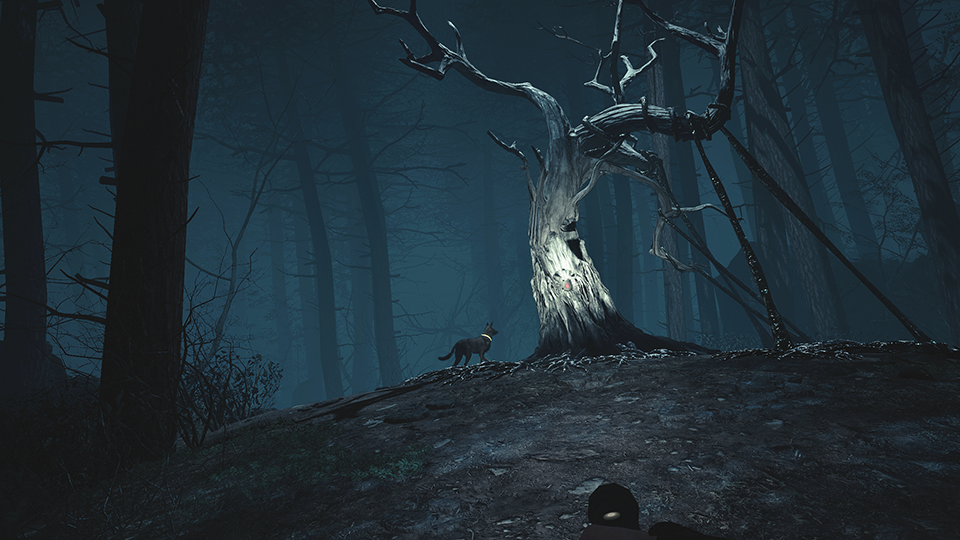 The creep factor runs rampant throughout the game.

AS much as I really enjoy this game, it’s not without fault though many of them are more tropes of the genre than actual faults.  Despite the extra amounts of interaction in the game, including some puzzles in the latter half that require some extra little bits of interaction, this is largely a walking simulator in the vein of Paranormal Activity or Here They Lie so if you haven’t cared for the genre in its previous iterations, I doubt Blair Witch will change you mind.  The game will take somewhere in the 6-hour mark to beat depending on how much you explore and search for hidden items which are rampant throughout the game.   Multiple endings are available but unless you use a guide, you’ll almost assuredly get the “Bad” ending which is by design though and does promote replaying the game as situations that seemed to only have 1 solution in the game, actually have 2 making the second playthrough quite different, especially during the flashlight monster encounters.  Despite Bullet being awesome, he can be a little annoying at times as he can incessantly bark while you are busy doing something else though ultimately, I can’t complain too much as his presence really was soothing and added a nice relief from the horror elements at play.  Lastly would be an issue with the Moves, which work near flawlessly, save when you need to mess with padlocks which requires two hands working very close together and caused a fair bit of frustration though there only a few of these in the game.   All of that said, if you are into walking sims, it might not look amazing, but the mechanics at play really make this one of the better ones I have ever played. 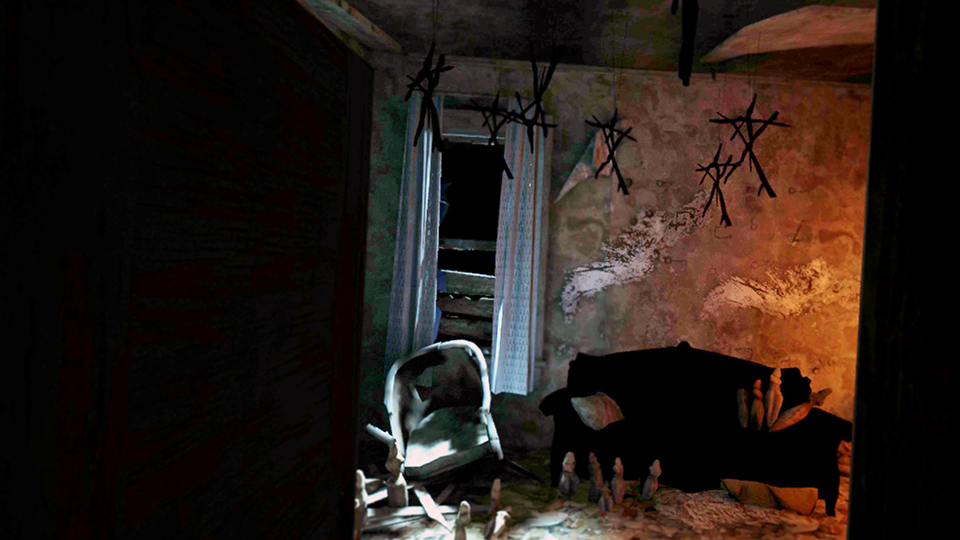 Its not Blair Witch without a creepy house or 2.

Suspense/Horror fans should rejoice, especially PSVR ones, as we haven’t seen too many entries in this genre in the last few years and few deliver an experience as in-depth as Blair Witch.  It builds upon the mythos of the franchise and while I am admittedly unfamiliar with the world outside of the 1st 2 films, I enjoyed the story in here as it felt like an interactive movie where I was the main character.  Throw in the multiple endings, solid performances, a high creep factor and an endearing dog and couldn’t help but be immersed in this game and enjoyed my time getting lost in the woods!

What would I pay? the $30 US price on this is alright as the game delivers on the suspense, scares and story and offers some decent replay value thanks to the alternate endings.  If you have been clamouring for a little more scares in your VR diet, Blair Witch VR delivers the goods!

Bloober Team provided  The VR Grid with a press code for this title and, regardless of this review, we thank them for that!