Crisis VRigade is an intense arcade S.W.A.T sim where you are tasked with responding to insane situations across 3 very different scenarios.  If you remember the bank heist scenes in the movies Heat or Point Break, I will say this the VR equivalent of those intense scenes only cranked up to 11! 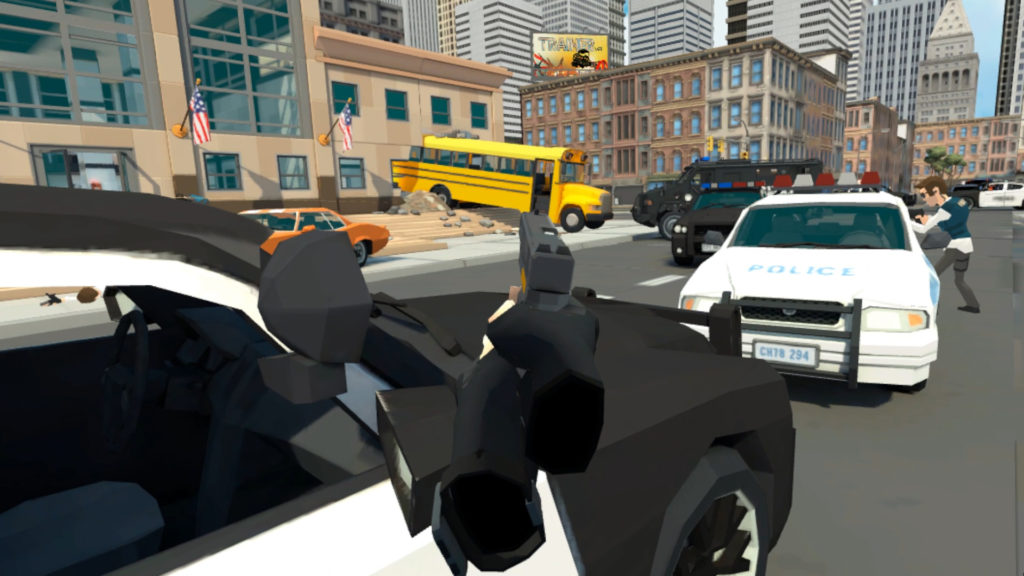 You are gonna see this stage a lot…and that’s not even a bad thing!

Crisis VRigade supports 2 Move controllers, a DS4 or the Aim controller with each offering up unique ways to play the game.  With the Moves, you are initially armed with a pistol with ammo clips at your belt.  To reload you need to eject the clip, grab and place the new one in your gun and cock the slide(?) getting you ready to unleash your next barrage and any larger weapons you pick up can be handled with both hands allowing for much more stability.   The DS4 is similar the Moves with you still being armed with a pistol, but with reloads relegated to button pressing.  With the Aim, you now have a semi-automatic and reloading is also relegated to a button press, though you still need to wait for the animation to play through, so you’d better take cover.  There is no locomotion to speak of as you are placed at the next waypoint with a broken cut scene playing in between the action sections showcasing your course through the level.  Like the light gun cover shooters of old, you need to take cover lest you be killed by an errant shot.  There are tons of bad guys to take out and you need to do it quickly as you have only 7 minutes to get through each mission.  There are 2 difficulties available: Rookie and Hell with the latter being unforgiving allowing no room for error ie. If you die, you must start over, if a hostage dies, you have to start over, if the time runs out, guess what? You have to start over.  Rookie offers up substantially easier play though by no means would I call it easy as you can take an extra hit  or 2, health pickups can be found in each mission, killing a hostage won’t end the game and additional weapons seem a tad more plentiful.

A very recent addition added co-op multiplayer to the game where up to 3 players can tackle any of the missions on either difficulty.  It’s a welcome addition that changes up the gameplay nicely as you now have some squad mates that can cover you much better then the AI officers ever could.  It makes for an easier experience though still offers a ton of challenge as the same rules apply from the single player mode meaning if you die, you stay dead though you can switch to a spectator mode and continue to watch your allies as they move on without you. Currently, this mode does not offer in-game chat so for those who really want to make the most of this game, it might be best to make some friends and party up so you co-ordinate a little better. 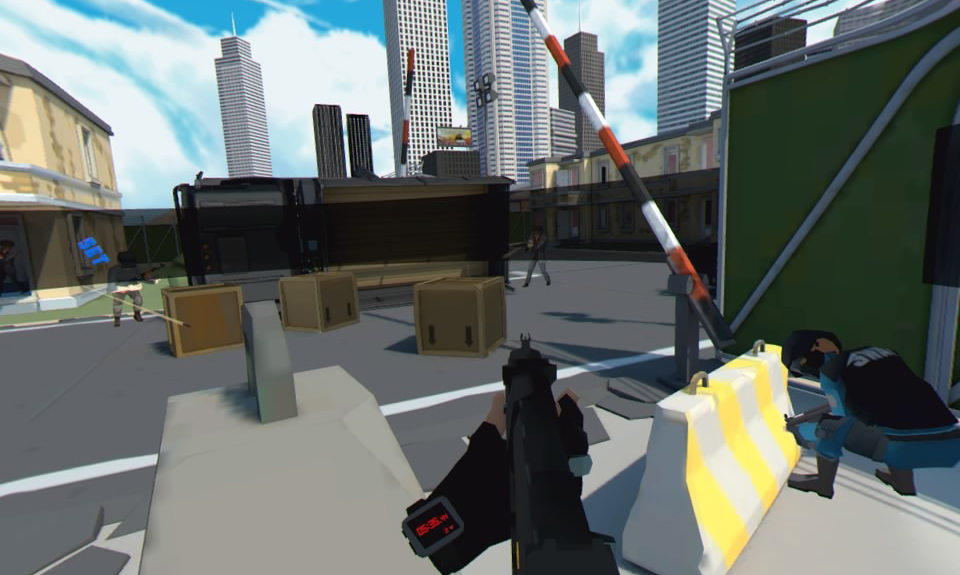 It’s always better with a friend!

Bright, vibrant colors are used as is a rather cartoonish and blocky world, similar to what we saw in The Perfect Sniper or the Morrigan.  Don’t let the visuals fool you though as the action is intense with you taking cover as enemies unleash all hell in your direction and narrowly miss you as you duck in and out of protection.  The 3 stages take you through a bank heist, an industrial area by the docks and a tower with an opening lobby scene identical to the one in ‘The Matrix’.  The bad guys look different in each scenario though sport the proper attire for that mission be it bank robbers in halloween masks, armed soldiers or just average looking guys and girls armed to the teeth.  It’s not the best-looking game I’ve ever seen, but the gameplay makes up for whatever is lacking in the aesthetic and every time I started, I was immediately too focused on survival to worry about anything else, plus the simplistic art style makes it very easy to identify your targets.

The sound is just as intense with an actiony score playing over constant gun fire and radio chatter from your fellow officers. The guns sound great and the impact and audio effects are solid, immersing you in the chaotic battle and making you feel like you are playing through an over-the-top cinematic experience.  Your commanding officer is an absolute dick as he constantly derides your efforts while quoting movies though I did enjoy his presence in my ear and found him more amusing then offensive, but he is a dick! 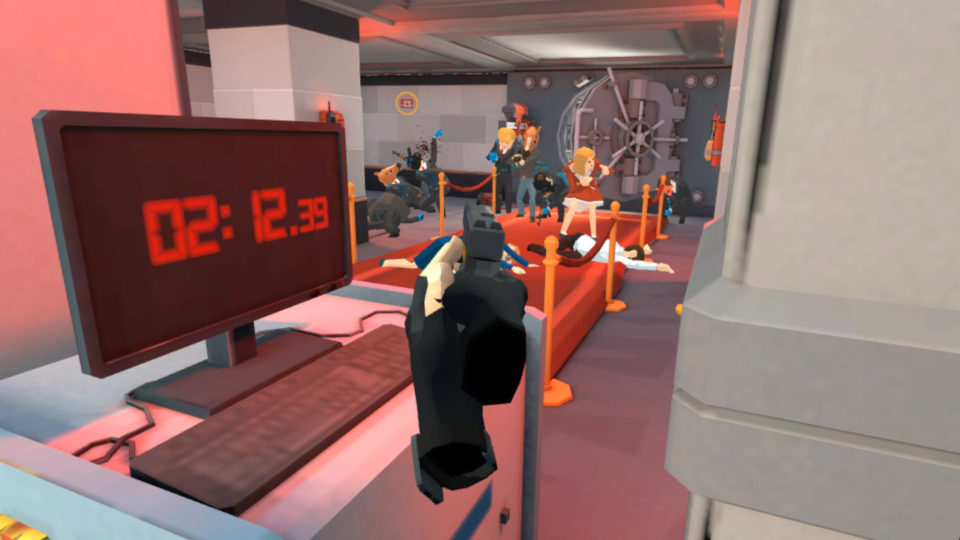 The clock is a constant reminder that you are running out of time!

For everything Crisis VRigade does right, it does have some issues that need to be mentioned.  Cover can be tricky, and I was killed more then a few times from bullets travelling through the protective barrier in front of me which was frustrating.  At certain points in the game you can choose from one of 2 paths and I soon learnt that one choice may just be a little easier to survive in then an another, so I ended up avoiding those areas that just didn’t properly provide enough cover.  My second issue would be the brief moments in between cover sections as you are shown areas in between the action bits which highlight you moving through the stage and I would have much preferred a full on cut scene in place on these 2 second jumpy clips.  The last issue is one I take way less offense too, but I think is worth mentioning that this is really, REALLY hard.  Each stage is designed to be beaten in less then 7 minutes though I suspect many like myself will invest way more then that as death is almost a sure thing, even on the easier difficulty. In truth, I gave up on this game before the multiplayer patch as it became to punishing and I just couldn’t invest the time needed to get good.  Thankfully, the MP patch has reinvigorated my interest in the game and playing with others really makes the game a lot more fun. 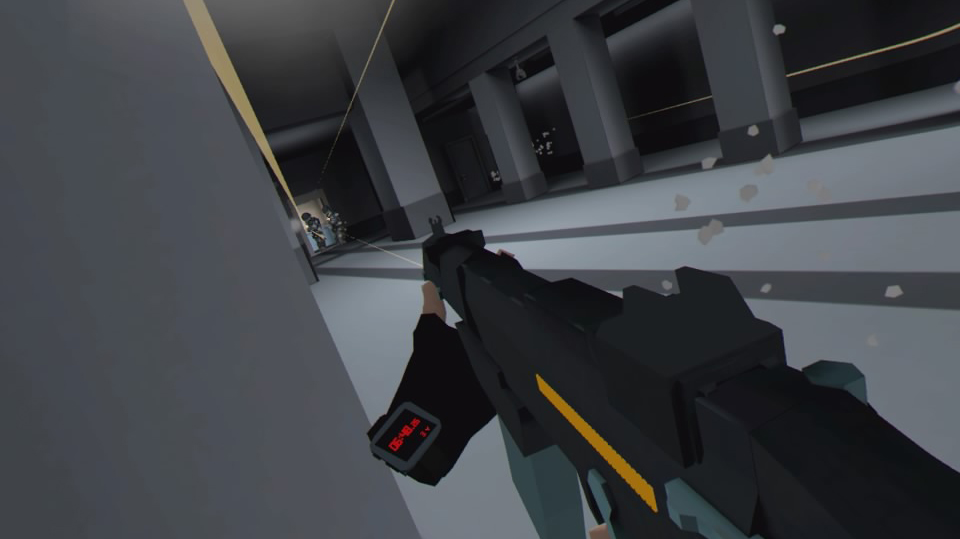 When those elevator doors open, all hell breaks loose!

Crisis VRigade is a taste of the classic light-gun action we have been clamouring for and while it is insanely challenging, it’s also equally rewarding when you get further then your previous attempts.  Add in that you can now play any of the 3 scenarios you want alone or with some friends and there is a lot to like about this.  It’s seen many updates since launch and as it stands today, this is the best version of the game we have ever had, and I highly recommend it to those who love action and challenge.

What would I pay?  Since launch, Crisis Vrigade has actually seen a price increase from $5 to $9 US and with all the content added in that time, including multiplayer, it is easily worth that newer price.  It’s an intense VR shooter that will call you back again and again.

Sumalab provided The VR Grid with a press code for this title and, regardless of this review, we thank them for that!