Top quality cinematic experiences are a rarity when it comes to VR thanks in large part to just how new the medium actually is.  Awake is 20-minute VR film about the emotional journey of a man who can’t escape his lucid dreams and because the story has a few surprises, I’m going to avoid any major plot spoilers. 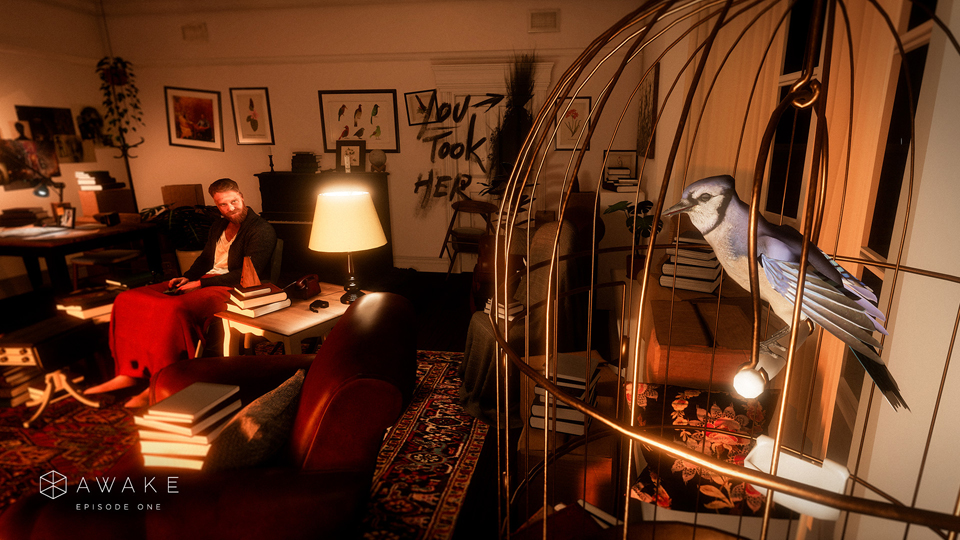 Harry is going through a rough time.

You need 2 tracked motion controllers here, though the interaction is pretty light with their use being limited to on the spot turning or pushing the story along by touching an item.  Otherwise, as this is a movie, you are placed in a spot to watch the story unfold as the story goes from scene to scene.  The opening moments introduce us to the Harry who is clearly having a rough time coping with whatever has happened to him.   Confined to a wheel chair, Harry is on the brink of a with the bulk of the story told through flash backs to a happier time leading up to his current plight.

The presentation is stunning and needs to be experienced.  The acting is top notch and what is very cool is that the actor’s performances have all been mapped to VR models and look amazing.  It reminded me of the facial mapping done in L.A Noire allowing for all the emotions from the actors to come through with great clarity.  Even on my GTX 1060, I was completely engrossed into the settings and performances as it felt like I was placed inside a true Hollywood film.  Lighting effects are some of the best I have seen in recent memory and as the story unfold, some new, and surprising visuals are thrown your way. 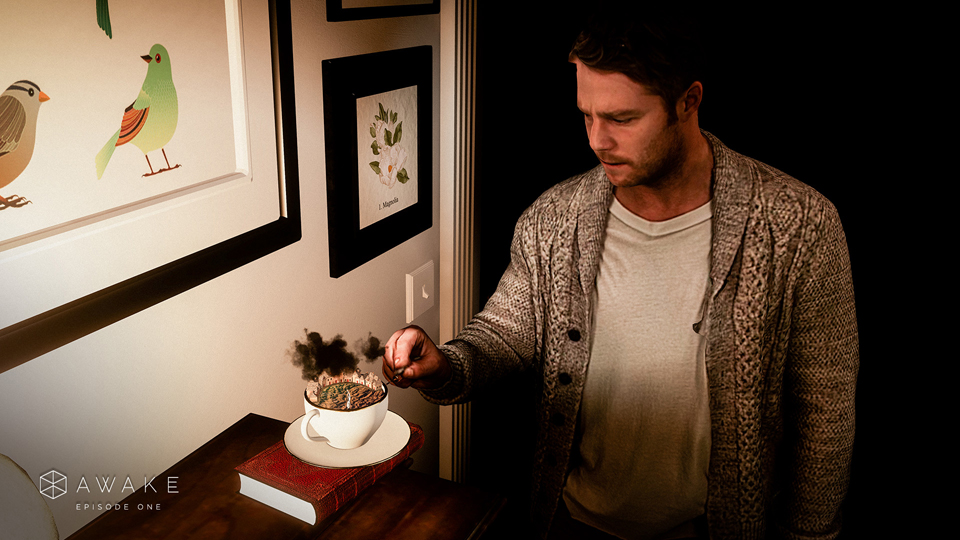 Yes…that’s a storm in a teacup.

What was done so well that many VR films struggle with is keeping you focused on the story and events unfolding.   Because you are in a fully realized 3D-space, it’s all to tempting to walk around or check out the scenery while 2 people are talking but in Awake, I found myself very focused on the story from beginning all the way to its conclusion.  While the visuals are incredibly realistic, they do suffer from archiving and some random pop-ins most notably in cloth and other less stable materials. which does detract a little from the experience.   I also found that leaning really close into the models revealed the stitching and edge lines where the mapping took place.  Those minor issues aside, everything else happening around you easily makes those issue moot.

Like I said, I’m not spoiling anything here and if you enjoy VR films, well told stories and top-quality performances then please don’t watch any trailers or even look at press pictures, just get it.  This is easily in my top 3 VR experiences and shows you just how well a ‘live-action’ film can work in VR.

What would I pay?  The $8 price tag may seem high for a 20-minute experience, but it’s one heck of an experience and I can’t wait to see how the next 7 chapters of this story expand on the mysteries touched on in this film.

Start VR provided The VR Grid with a press code for this title and, regardless of this review, we thank them for that!