Last Labyrinth is a game that, for myself, came out of nowhere and surprised the hell out of me with its darker tones and complicated puzzles.  Waking up, you find yourself strapped to a wheelchair, unable to move anything save for your hands and the ability to look around.  In front of you is a lamp and a small hand reaches out from the shadows to turn it on revealing the room you are in and that the hand belongs to a young girl who speaks a language you can’t understand.  You don’t know where you are or why you are there, but it’s up to you with the help of the girl to get out of the mad house of horrific puzzles you find yourself in. 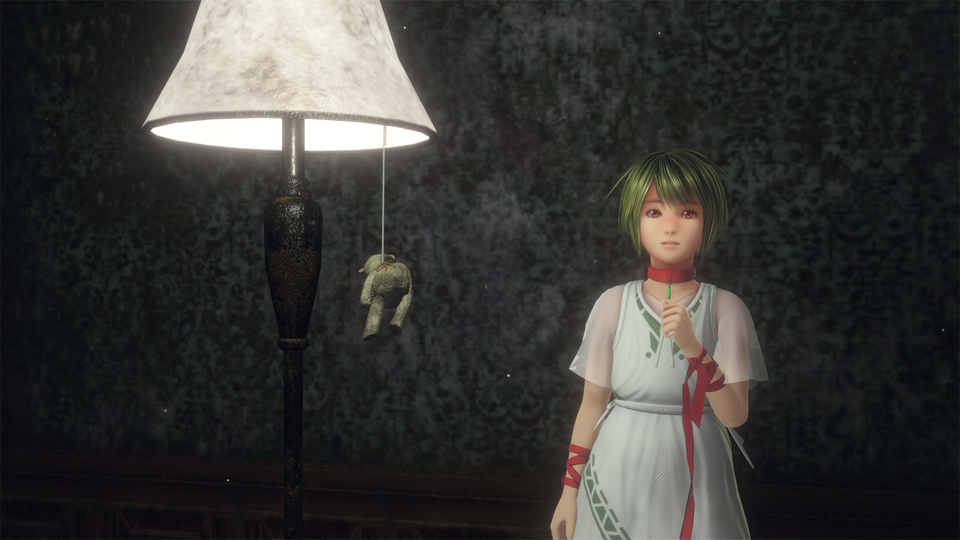 Meet Katia, you 2 are about to go on one heck of a journey.

As I said, you are motionless and must tell Katia, the girl, to interact with anything that you can, to get out of each room you find yourself in.  In your right hand is some kind of device which I would assume would be the laser pointer you use to select the items Katia should touch, but that isn’t the case as that laser seems to emit from your forehead which makes no sense, though works as it should.  Before Katia acts, she will look at you and confirm that you want her to do whatever she is about to do with whatever she’s about to touch with a nod or shake of the head.  Initially it’s a fun and intuitive mechanic and as long as you don’t get stuck on a puzzle or fail, the game moves at a steady pace.  The minute you hit a troublesome puzzle though, the shortcomings of this mechanic become very apparent as you nod your head at every single interaction, possibly even more then you should if Katia doesn’t register your nod the first time around.  Puzzle difficulty ranges from the simple to the brain busting and I’m not going to knock the harder puzzles as each one is unique, well designed and a treat to watch when it’s triggered.  Those slower mechanics though soon become a chore as the pace of the game comes to a grinding halt when you reach the more difficult puzzles.  With multiple paths and endings to get through, the developers suggest there is over 10-hours of content in here and full disclosure on this one, I haven’t beaten the game once yet. 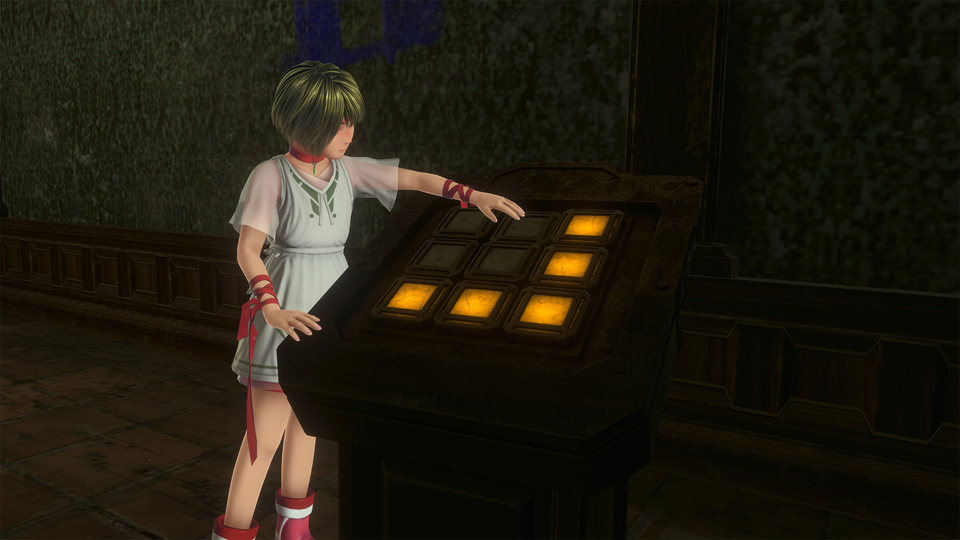 The puzzles come in a wide variety.

Some of the developers of the games Ico and The Last Guardian are behind this project as well and that comes through largely in the girl you meet and the overall quality of every setting you find yourself in.  Rooms are elaborate masterpieces containing anything from child’s toys, raised platforms, lasers, an organ, projectors and so many more giving each room its own feel.  Whatever this building is that you are trapped in, many rooms are gray or brown, dark and stark eliciting a wonderful sense are foreboding.  Katia looks amazing and the attention to detail on her and the stages is a definite highlight.  Where the horror elements come in are the traps, which are so over the top, there is almost no way they could exist in the real world, but within the context of the game, are brilliant, mind bending barriers that reward failure with one thing only, death.  The first time Katia died for me, she was surrounded by spinning spike cylinders trying frantically to run away until they closed in, eviscerating her before coming for you.  I was in shock and instantly felt protective of Katia and was honestly scared to fail again and cause this sweet girl such unrelenting horror.  The deaths always occur out of sight leaving the more gruesome bits up to your twisted imagination.  In each room you act as a stationary camera as Katia wheels you from one puzzle to the next though this only occurs during mini cut scenes on a series of monitors indicating that someone is watching you.

Silence pervades this game save for anything in a room that should make noise, typically after Katia interacts with it.  She speaks to you in a made-up language, though she’s never really that hard to understand as most of your interactions with her devolve into the yes or no mechanic.  Some freaky sounds and music pop up throughout the game with the standout being the traps which depending upon what they are may be as subtle as the whispering of a poisonous gas to the grating of steel as room closes in around you. 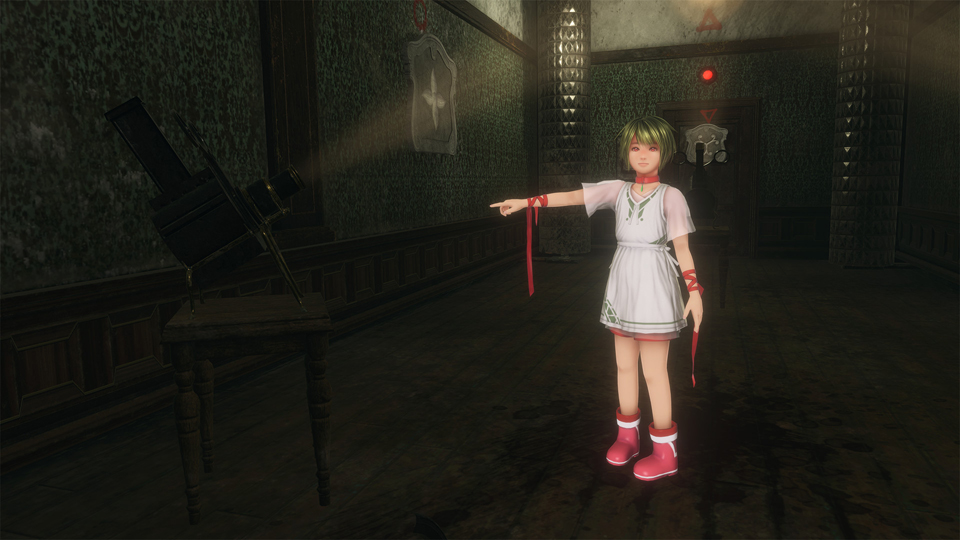 You’ll be nodding your head yes to this gesture A LOT!

My first hour in this game was fun, intense and challenging and while I did fail a few times, I never failed twice so the game went very smoothly.  There is a story in here, though it’s not entirely clear at the onset what it is though as you get through the game and unlock each ending, clues to the larger narrative will be revealed.  The first ending shouldn’t take more then and hour and half to get through with subsequent endings taking a little longer thanks to the difficulty spikes in the puzzles.  Unfortunately, at the time of this review, I’m not smart enough or patient enough to get there.  The initial run of puzzles offers indicators that light up when you are on the right path, but you lose those and are left to your own devices and that’s where my troubles began.  Some puzzles are broken up into more difficult sections and failing at any point forces you to restart that puzzle from scratch, which wouldn’t be so bad save for just how slow Katia moves.  Almost every action has her move to an object then, ask permission to interact with it, then proceed to push, pull, pickup or do whatever with it.  When the puzzles require multiple actions, it can be frustrating to have to repeat anything more then once, but on many occasions, death is only way to tell if you are right or not.  The puzzles also get very clever and very challenging and are honestly a puzzle solvers’ delight as the satisfaction in successfully leaving a room is massive.  With that said, frustration at failing may chase many away as it can be a daunting task to have to retry the puzzles multiple times. 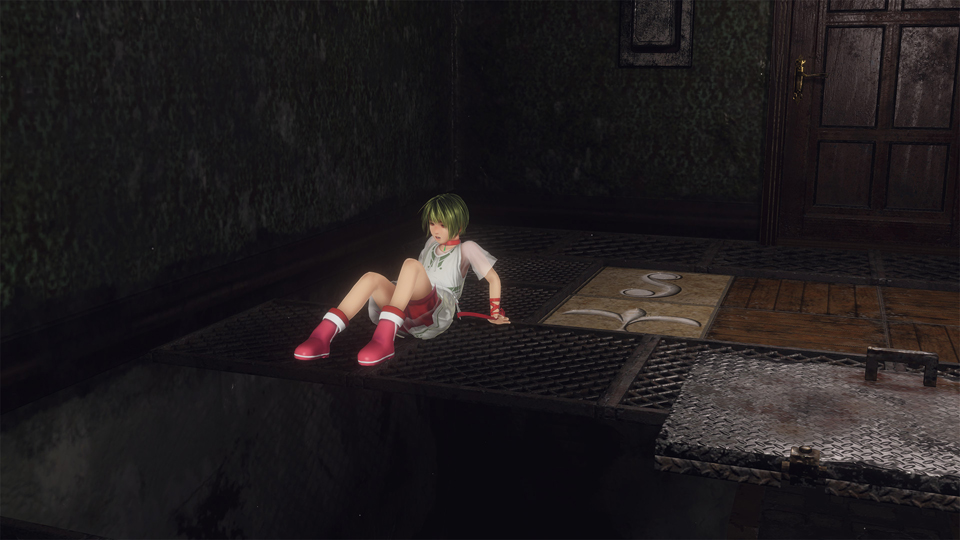 The danger is half the fun.

Last Labyrinth should be an impressive puzzler, but relies a little to heavy on minimizing sim sickness and sluggish gameplay.  It looks great and the puzzles are fun save for the mechanics implemented to solve them which, for myself, turn this game into one giant frustrating chore.  I don’t plan on giving up on taking this game on, but I can only handle smaller bouts before I need to take a break for fear of crushing one of my controllers.  If you are in the market for a VR puzzler, don’t look past this one, but be very aware of the issues this game has.

What would I pay? This is $40 US and you’ll definitely get your money’s worth, but the further you progress, the more restrictive the controls and game mechanics feel.  Due to those choices, I can’t recommend this at that price to anyone but the heartiest and most patient of puzzler solvers.  For those who are curious, if this ever goes on sale for half that price, I say pull the trigger as the puzzles really are a treat.

AMATA KK provided The VR Grid with a press code for this title and, regardless of this title, we thank them for that!