Megalith is something I have never quite played before in or out of VR.  You play as Titans, giants who must defend from, and attack, enemy forces.  This is a mix of first-person action combining Co-op MOBA elements with tower offense and defense action, an emphasis on teamwork and learning the intricacies of each Titan. 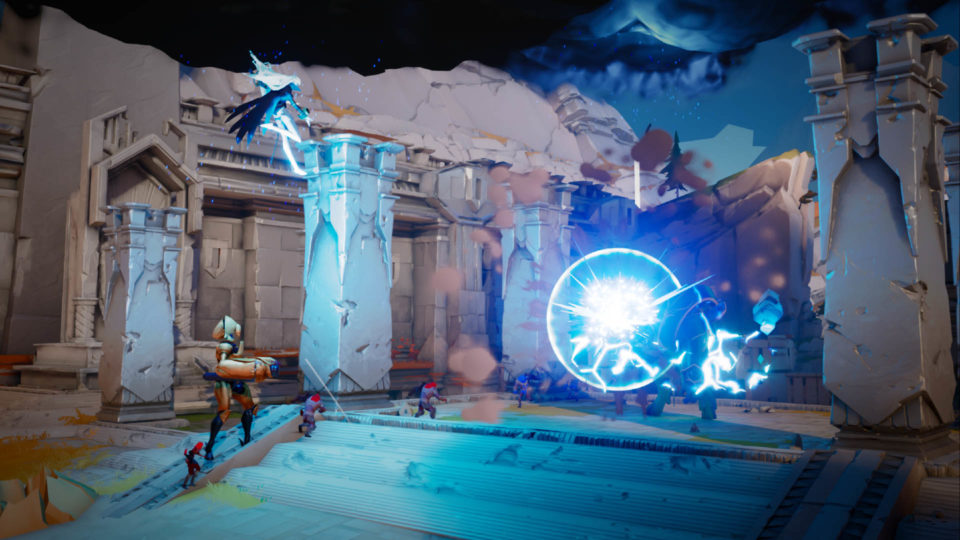 The action gets frenetic at times!

You can use the Moves or DS4 here and either method works great and will boil down to your preference of having thumb sticks to move around or having a little more immersion thanks to the tracking from the Moves.  Each of your 6 Titans has an array of unique attacks and powers so it’s also best to play around and see which one you find to be comfortable.  Some are weaker, but have significant range while others are meant for close combat dealing massive damage but can be picked apart from those ranged Titans.  The variety between all the Titans is great as each one really does feel unique so try them all out a few times before you land on your Titan(s) of choice.  You can also summon powerful minions once you have killed a certain number of troops and these little dudes will take on and distract the defensive towers you need to get past to take on the core of the enemy’s base.  Those towers will lay you out quickly so advancing forward becomes a chess game as you assist your own defenses while trying to push past the enemy ones. Coordination is key and certain level specific elements may also help or hinder your efforts.  Should you or an ally fall in battle you can revive each other within a set window which is the way to go as the respawn time is incredibly lengthy and punishing, especially if the opposition is making a hard push and your stuck watching them from a stationary camera as the respawn timer slowly counts down.  There are a lot of elements at play here, so patience will be key in truly understanding all the games nuances, but that same depth lends itself great to the dynamic nature of the game and the replayability. 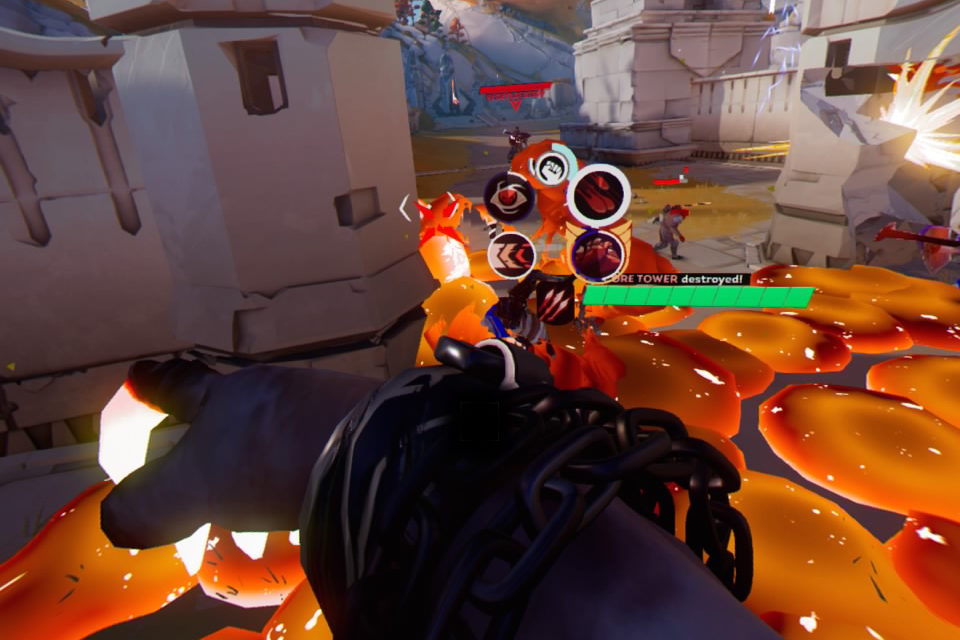 Choose your special attack and unleash!

On the looks side, you play as giant Titans, though it took my brain a little while to grasp the scale of the game. Towering walls and other structures litter the lone map, though a 2nd map is apparently coming soon, and it’s not until I focused on the smaller details like barrels and trees where I started to realize just how big I am, then I noticed the hills and the surrounding scenery and a slowly eased into feeling like a giant.  As far as the actual details go, the Titans carry a fair bit of character and care, though the scenery seem to lack that same quality.  That’s not to say the game looks bad, and once you scrutinize any particular object, the details seem to pop, but when you are navigating through the level, that detail just seems to get washed away with the game looking kind of drab.  I can’t even pinpoint why the visuals look the way they do, and I want to say again that it doesn’t look bad at all, but just carries with it an almost cell shaded look when it comes to coloring that makes the entire palette used just seem kind of limited.  The unique powers of each character have their own flare and whether your summoning massive stone walls, stabbing a healing spear into the ground or summoning an ice shield to defend from incoming attacks, the variations between all these abilities makes for a spectacle when it comes to the Titan on Titan action.

Sound wise everything here works with a clear focus being on the sound effects and ensuring the battles sound epic.  When your buildings are under attack a deep voice plays over the game letting you know your defenses are taking damage.  Any successes during a match are highlighted by an audio notification and full mic support ensures you and your pal can coordinate a proper strategy. 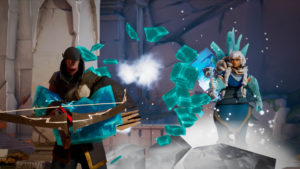 Where Megalith suffers the most is the lack of content. If you aren’t’ familiar with the MOBA formula, it can be tricky to figure out what exactly is going on and what you need to do.  Luckily, thanks to the Beta version that was released last year for free, a bulk of people know what’s going on and can aid you in your efforts.  Still, a tutorial mode feels missed, especially considering that there is a single player skirmish mode that let’s you play around without worrying about dragging down your real-world partner or facing a deadly duo who already knows the game inside and out.  Secondly is the lack of stages and while there is a 2nd one coming, that still means there are only 2 maps available which is way to light for a game like this.  The game is still a lot of fun, don’t get me wrong, but after only a handful of matches, I feel like I’ve done everything I can in the game besides unlocking all the available skins for each Titan which is done by earning and spending in-game currency through playing.  You can party up with apparently up to 4 others and play together though this is explained nowhere in the game and it wasn’t until I met someone online who explained to me their hidden matchmaking system thanks to his knowledge learned from the developer’s discord.

If you hadn’t pre-orderd the game, a 7th fighter is available who once again feels like none of other Titans, which is great, but I do take a little offence to this as it does feel a little ‘pay-to-win’ish.  I don’t mind paid DLC, but when it’s for game changing content, it feels like a cheap cash grab on a game already sitting in premium VR price range. 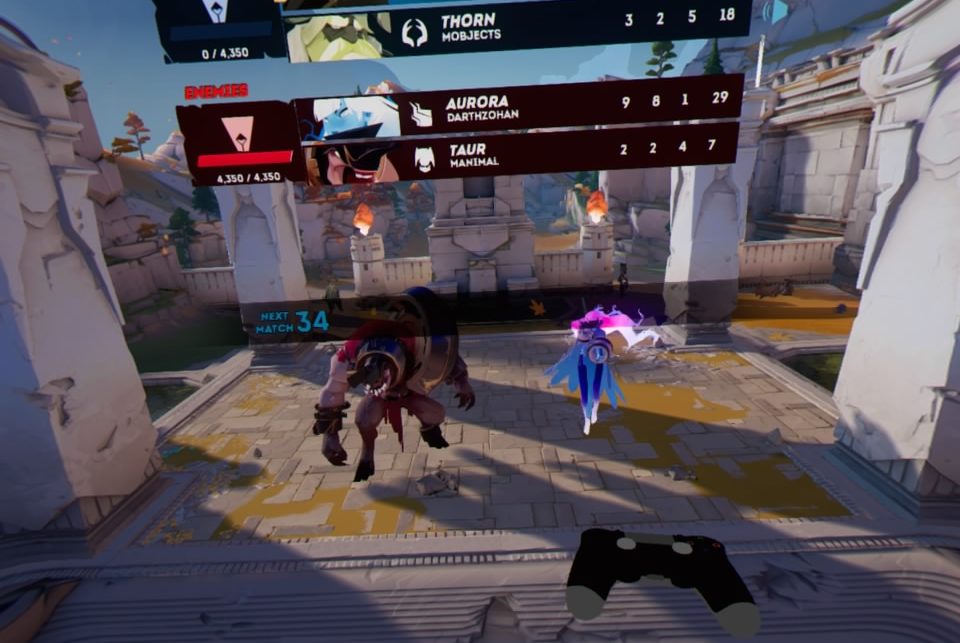 Megalith has a solid foundation that is held back by a lack of variety.  The Titans do great job of keeping the action fresh, but the singular mode and stage aren’t enough to keep the game from feeling repetitious way sooner then later.  A 2nd stage will help this problem greatly, but I doubt 2 will be enough to sustain lasting interest in the game.  Just like last years multiplayer battler Code 51: Mecha Arena, Megalith is solidly built multiplayer battler held back by lack of content and just like that game, every time I go on, I have a great time, but the motivation to venture back into this world lessens with each play.

What would I pay?  If there were at least 6 stages here then maybe the $30 asking price could be justified but for what’s currently available at launch, $15 seems more appropriate.  Adding that second level definitely sweetens the pot, but even when that comes out, I would be hard pressed to spend more then $20 on this let alone the full price plus an additional $5 for one more character.

Disruptive Games provided The VR Grid with a code for this title and, regardless of this review, we thank them for that!