Acron is an odd-ball little game designed for local competitive play with the VR user playing as a tree, out to defend his golden acorns from diabolical squirrels who are out to take the back to their nest.  The squirrels do not play on the social screen but must rather download the companion app and play on a smartphone making this one the more unique games have played in recent memory. 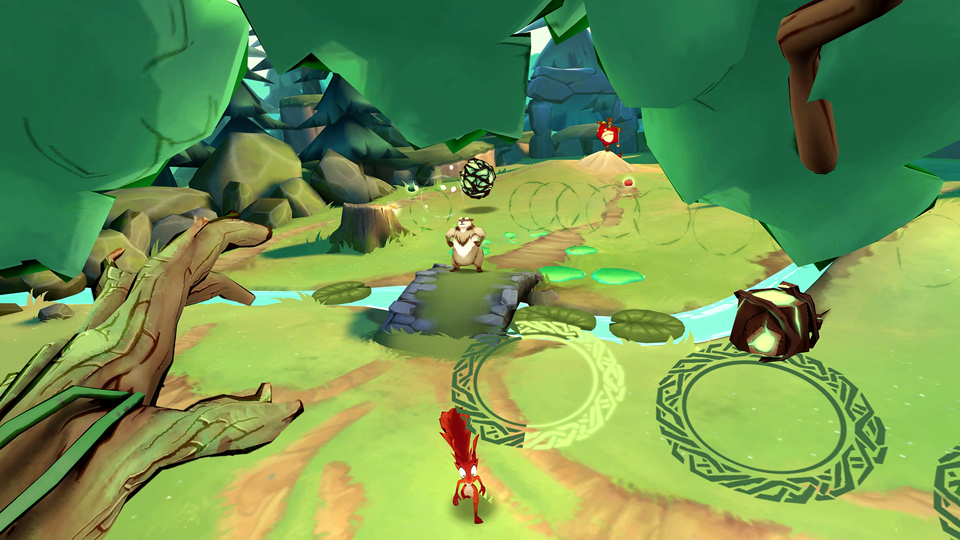 Stop them at all costs!

As the tree, you have 2 branchy hands which you can use to hurl wood chunks, boulders and tree sap at the incoming squirrels, thwarting or slowing down their effort to get the acorns at the trees base.  Each type of ammo respawns indefinitely though each is on a different timer so while your wood chunks spawn almost instantly, the other 2 take their sweet time meaning it’s best to use those a little more wisely.  Hitting the squirrels with either wood or rock sends them back to their spawn point, but if they are carrying an acorn, the impact just knocks it out of their hands, allowing them to possibly grab the acorn, but leaving them susceptible to attacks.  Sap can slow squirrels down, making it a little easier to hit them, but the squirrels aren’t without their own advantages. Playing on a mobile device turns this into a mini 3rd person platformer of sort with a virtual thumbstick letting you control where you want the squirrel to go and on the right side of your screen is  the squirrels special ability which is different for each of the 4 different types of squirrels.  One burrows, one carries a shield, one is super fast and the last one can build stackable ramps around the stage offering new routes to get to the tree. 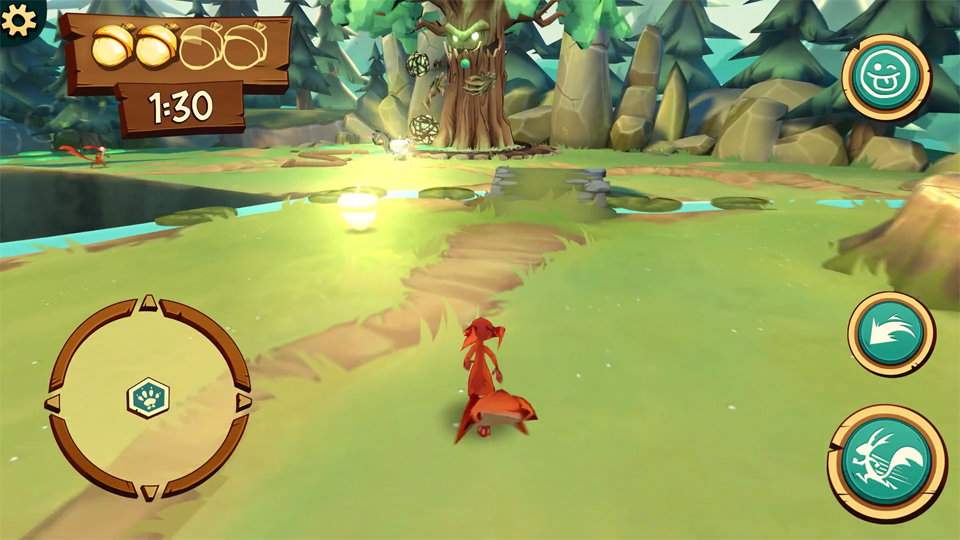 Playing on the phone is a completely different experience.

There is a brief opening tutorial stage offers up “13” stages to practice your VR skill against AI squirrels through a variety of scenarios that teach you all the games finer mechanics, like how to take down barriers, use boulder more effectively and practice against those different types of rodents who can also use mushrooms scattered around each stage to jump high and clear large sections of each stage.  Unfortunately, that’s where the single player content ends as to play the actual game, you need at least 2 other players on phones.  Up to 8 non-VR players are supported and the VR player can choose how many players he would like to face with any unfilled spots being replaced by AI bots.

Acron looks very cartoonish, reminiscent of many animal-based platformers with everything carrying exaggerated animations and colored in a bright, almost pastel looking fashion.  Your treetop bobs with every movement and the squirrels run around the map in silly fashion.  There are a variety of stages to choose from, each with a different layout making each match feel slightly separate from the last, though the core gameplay never changes up.  Every action, from throwing, impacts, squirrels jumping, and nabbing nuts is all accompanied by little mini explosions of animation from swirls, flashing lights and puffs of smoke.  You’ll visit caverns, forests, nighttime groves and a few others with the overall aesthetic in here being very friendly, inviting and carrying a nice level of polish.  Some light, very ambient music plays in the background though the sound effects from all the chaos on the battlefield will be what you notice above anything else. 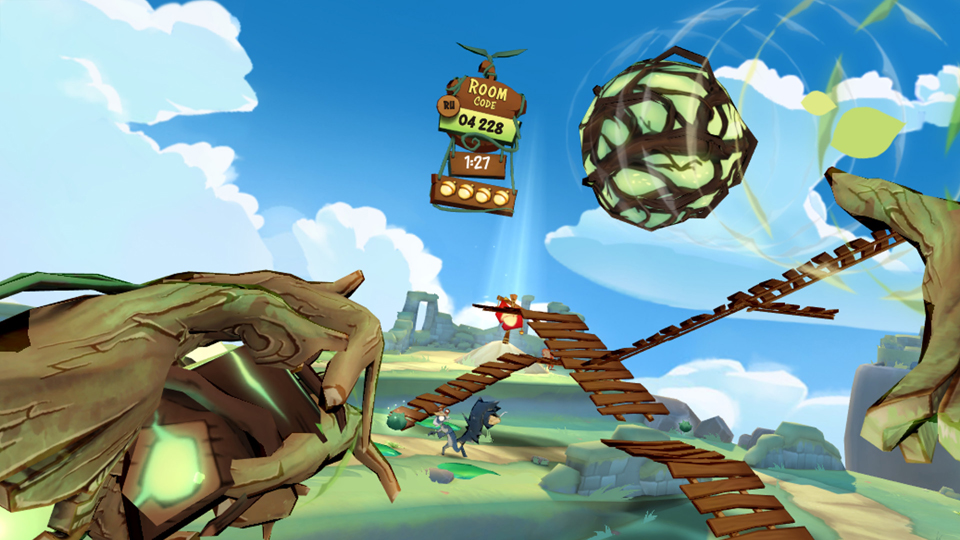 Keep an eye high and low!

Acron was designed for local co-op with your friends playing and strategizing in the same room with you.  There is no way for squirrels to communicate online and strategy is key to getting those golden acorns.  The AI isn’t nearly as dangerous as human opponents and they will wander the map in silly fashion making them easy targets.  With that said, the inability to play this without a minimum of 2 human player to even start a match makes this a very niche title.  As stupid as the AI is, not being able to just mess around with 8 computer-controlled opponents seems like a very silly choice and very limiting as you really can’t enjoy the game unless you are playing with friends.  Every game started has a set code that mobile player must enter to join in, so even if you just wanted to attempt a public match with strangers, you can’t.  Don’t get me wrong, when I got a game going, I had a lot more fun then I expected too and enjoyed my time in the game.  Playing as the tree is an exercise in frenetic insanity when you are facing 8 opponents and it’s so easy to lose track of them as they come at you from high and low.  Even playing as a squirrel is fun and its easy to forget that you are playing on a phone with a VR player and just focus on the action. 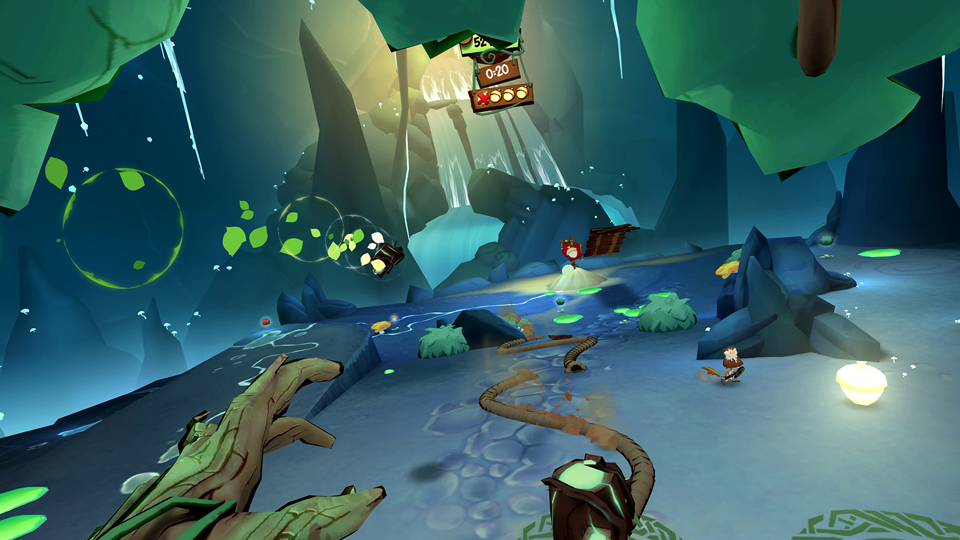 Acron is good at what it does, but unless you plan on having local VR parties where you share the VR experience with others, while downloading companion apps to your phones so everyone can play, this isn’t for you.  The restrictive nature of this game hurts the overall package here and even though I did enjoy my time in this, the fact that I have to wait until my next big get together to really experience it’s full potential makes this a hard game to recommend except to those I mentioned earlier.

What would I pay?  This is $20 and for that price, that’s a tough sell.  It’s a lot of fun when you get a game together, but I think for many of us, that’s just not going to happen making the value here reliant on just how many social gatherings you are a part of.

Resolution Games provided The VR Grid with a press code for this title and, regardless of this review, we thank them for that!