It’s funny, you would think with first person nature of VR, we would have seen a ton of shooter experiences for our headsets. Don’t get me wrong, we have more then enough smaller FPS games, but the amount of quality, full campaign shooters is actually very low. Evasion hopes to be the next big FPS in VR delivering not just a full campaign, but some coop action as well as some relatively unique mechanics. 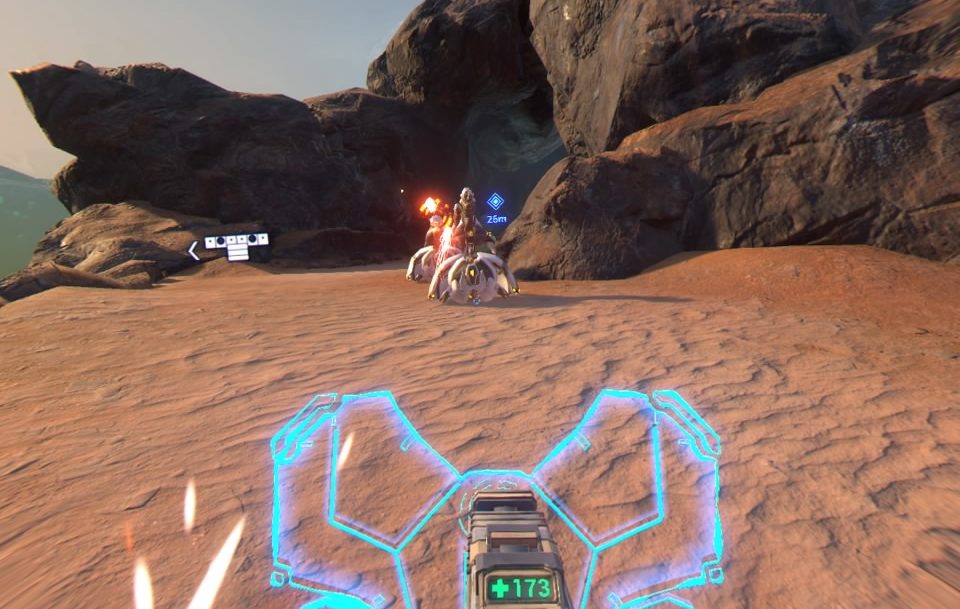 Shoot, shoot and shoot some more!

Like other shooters that support the aim controller, you can use the DS4 as well but unlike every game that uses the aim, the DS4 might be the better option. Either method controls the same with full locomotion and the right trigger used to fire. You can choose from one of 4 character classes, each with their own abilities, though they all perform the same when it comes to the base mechanics. Besides just shooting bad guys, there is also a tether mechanic in place that allows you to grab enemies and fling them about when their health is low enough or suck in valuable energy capsules. These capsules will either fill up your power bar, allowing for increased power attacks or a few seconds of class specific super attacks that unleash massive amounts of damage, though drain your stores rapidly. The other capsule type creates a healing circle that replenished your health while you are inside it. Using the tether deactivates the shield on your gun so picking your moments to lasso in those much-needed boosts is an extra level of challenge. To shoot regular blasts, all that’s needed is a press of the trigger, power shots require you to hold the trigger for a quick second while the larger attacks needing you to hit multiple buttons to activate. This is why DS4 may be the way to go as you need to press the trigger for each shot and given the hectic nature of the combat, an auto fire mode feels desperately lacking.

There are 2 modes in Evasion; campaign and survival and both can be played alone, or with a friend…or friends if you are playing the pc versions of this game as 4 player co-op is supported for those headsets. Either mode plays the same with you being pitted against wave after wave of enemy robots bent on your destruction. Survival pits you against 10 waves of enemies in a contained area, each harder then the last with a boss battle or 2 sprinkled in for good measure. The campaign tasks you with saving some colonists from said robots through 9 stages of non-stop action. Each stage has you traversing a linear path, fending off robots to get to that level’s objective. The objectives range from hacking a computer, destroying defences blocking your way, or just surviving. Some missions include some additional modes like staying in a small circular area for a certain amount of time or having to step on specific plates to lower the shields on a nearby target, all while always being assaulted by all manor of robot. 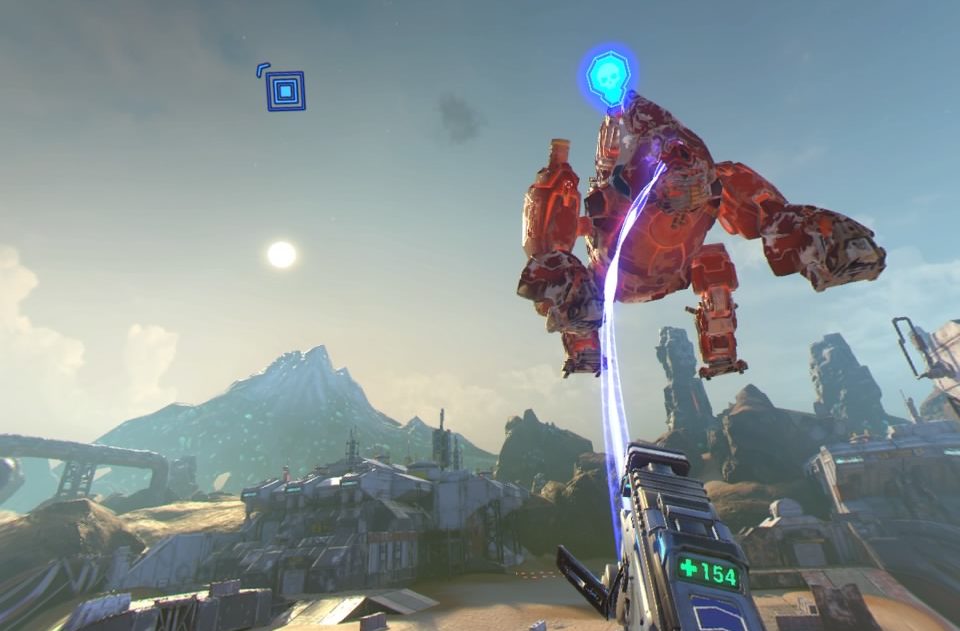 The tether mechanic can save you butt…and make for some comedic moments!

Evasion at first glance is a visually impressive game. The character models look great and looking down reveals a fully animated body which I’m always fan of in 1st person experiences. The stages have a massive scale and the detail in the backgrounds and environments is top notch. The robots you face come in a wide variety of forms and come at you from up in the sky or right in front of you ensuring you always stay on your toes. Evasion states it is a bullet hell type game and in a hectic fight, it absolutely is with all manor projectile being launched in your direction, some you can shoot out of the sky, or block and deflect with your shields. Like I said, at first glance it looks great, but it doesn’t take too long until the stages all start to look the same. Other then palette change halfway through, the entirety of the game looks the same. Besides a few destructible cover locations, each level is static and feels quite barren and the stages are not only very linear, but often double back on themselves for repeat viewings of area you had left behind.

Your weapons have a satisfying punch as do the enemies attacks as well.  They spout out mechanical noises, more so to indicate that they are in the area then anything else, but as some enemies do try and sneak up on you, their noises are welcome.  While you are alone during the game, you do have an AI of your own that spouts out some very dry humor, mostly in regard to your lack of skills and continued surprise at your survival.  It doesn’t take too long before you are in contact with some colonists on the planet who need your help, but they are only heard and never seen, with the lead colonist guy also bemoaning your earlier efforts.  The quality of the acting is good enough but does come off as a tad cheesy, but they do their job given the limited narrative.  A very generic rock track (or tracks…I honestly couldn’t tell) plays throughout the game, which reminded me of playing through more intense shooters from the 90’s but just annoyed me more then anything else as it is a very typical guitar heavy tune. 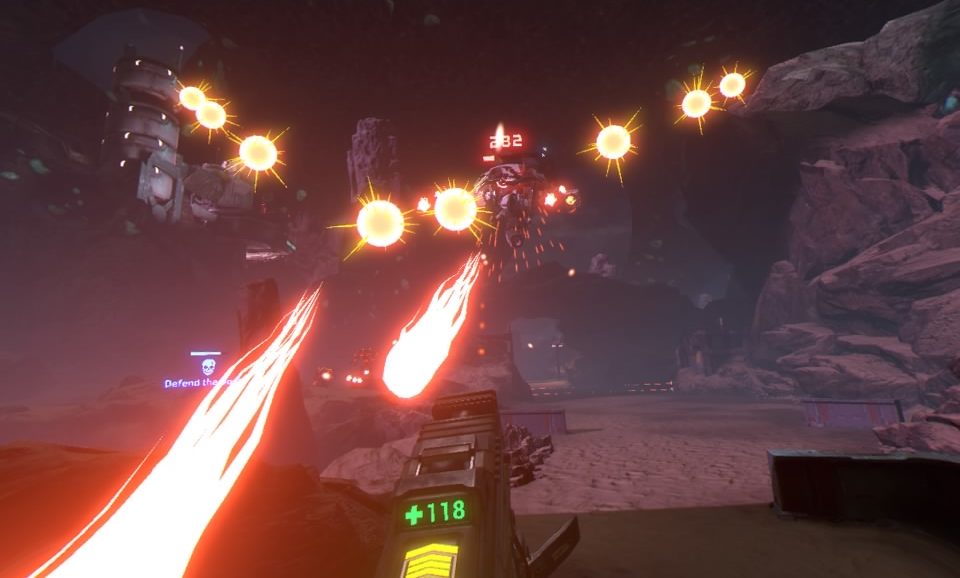 The boss fights are the most hectic part of this game!

Evasion’s core mechanics all work as they should but a bunch of issues plague the entire experience.  Evasion seems to be built with multiplayer being the way to play, as the single player campaign, though never really hard, feels very cheap at times as enemies, mainly the bosses, overwhelm you.  With a friend you have the ability to heal and/or boost each others’ abilities which comes in very handy when you are on deaths door.  The enemies you face are also incredibly stupid containing minimal AI, instead falling into movement patterns, taking cover or just running at you without a care in the world.  Soldier-types may take cover, or not and won’t move if that cover is destroyed.  Some enemies fly in ridiculous patterns, bumping into each other or the environment.  As soon as enemies are spawned, they know where you are automatically and will fire, regardless of whether obstacles are between you and overall, they are quite mindless with the challenge coming from the shear number of projectiles fired your way.  After the 5th stage you will have seen every enemy the game has, minus the main boss, and each stage becomes almost identical to the last.  While you do walk around the level, enemies greet you in waves that you need to take out to proceed and as the enemy types are the same from the 1st stage to the last, encounters become very repetitive, very fast.  Constantly having to press the trigger for each shot becomes fatiguing, especially with the aim controller. 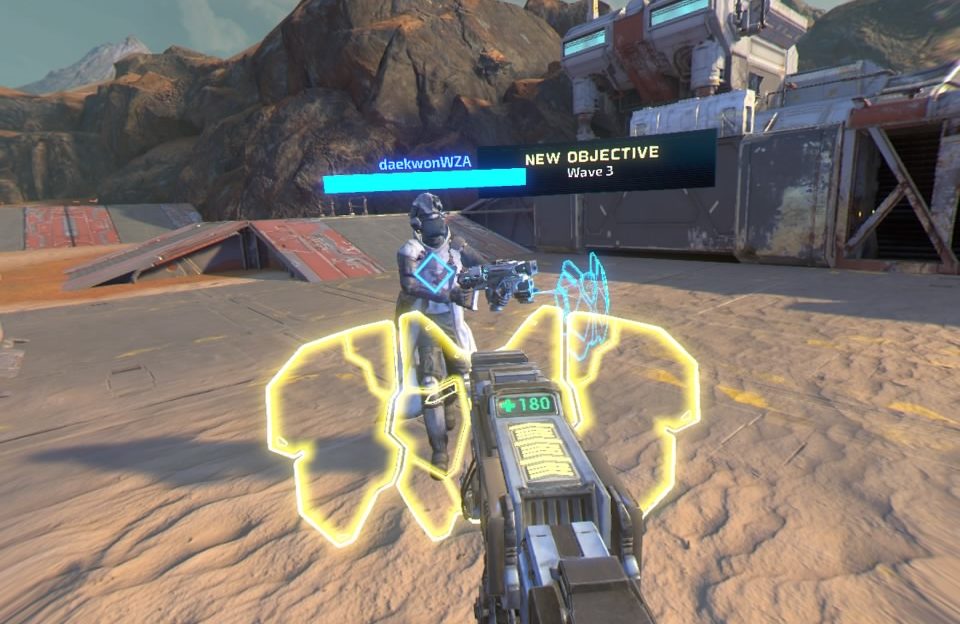 Best played with others!

The largest issue I mentioned is the monotony and no matter whether you play the campaign, or survival, the game feels the same.  There are no upgrades or temporary power-ups and the stages all look the same.  Enemy encounters are the only interaction in the game and as each one feels the exact same as the last, playing more then one stage at a time just gets boring.  Playing with a friend alleviates none of the game’s issues, though working together in a tough situation is much more satisfying then going it alone.  Like I said, the core mechanics here work but the total package just feels like yet another shooter that has a lot of style, but much less substance.

What would I pay?  The co-op gameplay is the saving grace in Evasion, but the full price still seems like huge stretch.  Evasion’s campaign repeats the same goals over and over and while game does take around 3 or 4 hours to beat, after the first 40 minutes, you have seen everything Evasion has to offer.  This is a $20 game that just wears out it’s welcome way sooner then later.

Archiact provided The VR Grid with a code for this title and, regardless of this review, we thank them for that!