The sequel no one was expecting has arrived! Unearthing Mars released last year to underwhelming reviews and less then stellar reception. That game featured a rather complex story told through some explorative missions on Mars. You got to teleport-walk around some smaller areas, awkwardly drive a vehicle across the red landscape, find and feed some Martian Koala’s and in the final stage, defend yourself in a mini-wave shooter against the some very large flying foes. The Ancient War continues that narrative with you once again playing as ‘co-pilot’ with you and your team trying to discover the secrets in the Ark, a relic from Mars which contains more clues to its histories. 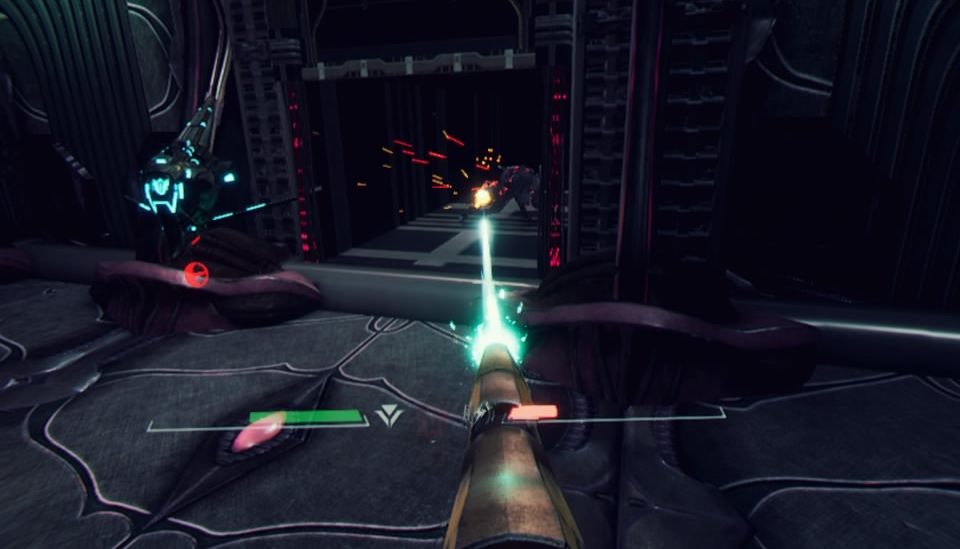 When the enemy shows up, start shooting!

Gone are the driving and exploration missions, leaving us with an on-the-rails nav point based wave shooter taking place during the final days of life on Mars…I think. In UM2, you use the Ark device to travel back into the memories of a soldier on Mars names ‘White Gun’. It takes mere moments before you are assaulted, though thankfully you are armed with a laser gun, and thus begins the dispatching of wave after wave of enemies as you traverse through the campaign. I used the Aim controller for the bulk of my play with the DS4 handling like it would in Farpoint or Firewall, it’s serviceable, but not the way this is meant to be played. Besides shooting stuff, the combat has some additional depth in the form of a slow-down mechanic, which allows you to attack critical spots only highlighted in this mode, making short work of your foes. This ability only lasts a few seconds and takes time to recharge so saving it for more dire situations is probably your best course of action. Some enemies fire shots which hang in the air for second, allowing you to either shoot those blasts out of the air or dodge them, which I thought added some nice depth. Lastly, would be the bosses, who have specific points on them you need to hit to cause damage adding just a tiny bit of strategy as you try and avoid their assaults while targeting those weak spots.. 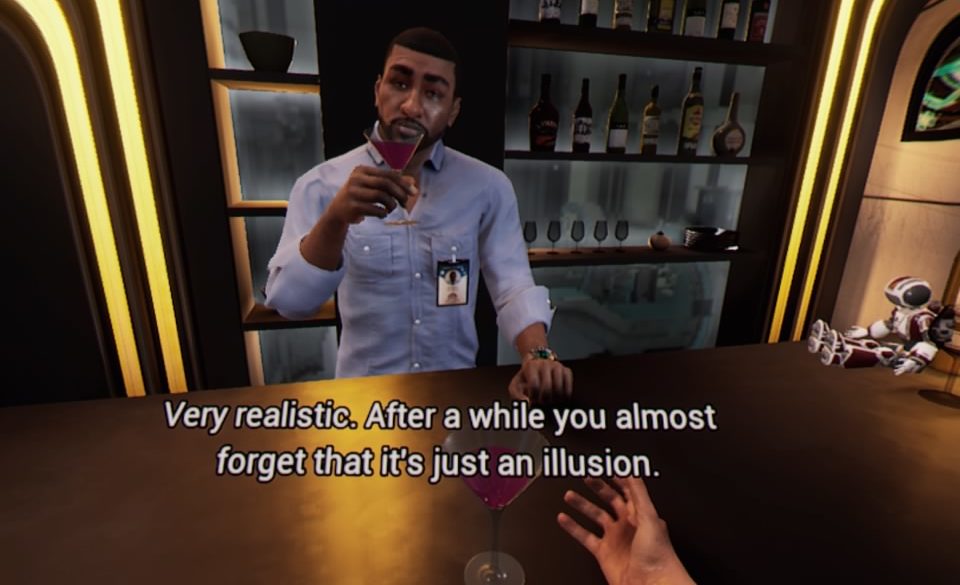 The character models are pretty good!

Like it’s predecessor, UM2 has some highlight visual moments that put other games to shame while at the same time carrying some larger vistas with some very washed out visuals. The opening moments repeat the first game with you at the helm of ship while an NPC talks to you. The level of detail in the characters is top notch and even the enemies don’t look to bad either, especially the bosses. The initial levels suffer from feelings of repetition with a bulk of the game taking place in a facility, so you’ll see hallways and rooms you swear you’ll have already seen, and probably have. The latter half of the game changes the setting a bit with some more grand scale, outdoors environments. No matter which stage you are in, you will see the same enemy types throughout the entirety of the game, minus the boss battles, making everything feel like you have already been here and seen that already.

Unearthing Mars 2 is peppered with actiony music and some decent sound effects, especially with the guns packing a fair bit of power. Also back from the original is the less then stellar voice acting which is ‘B’ movie bad at times and while I do dig cheesy dialogue, this game takes itself a little to seriously making the script more laughable then anything else. Some cinematic moments take place which were fun to take in and overall the presentation is solid. 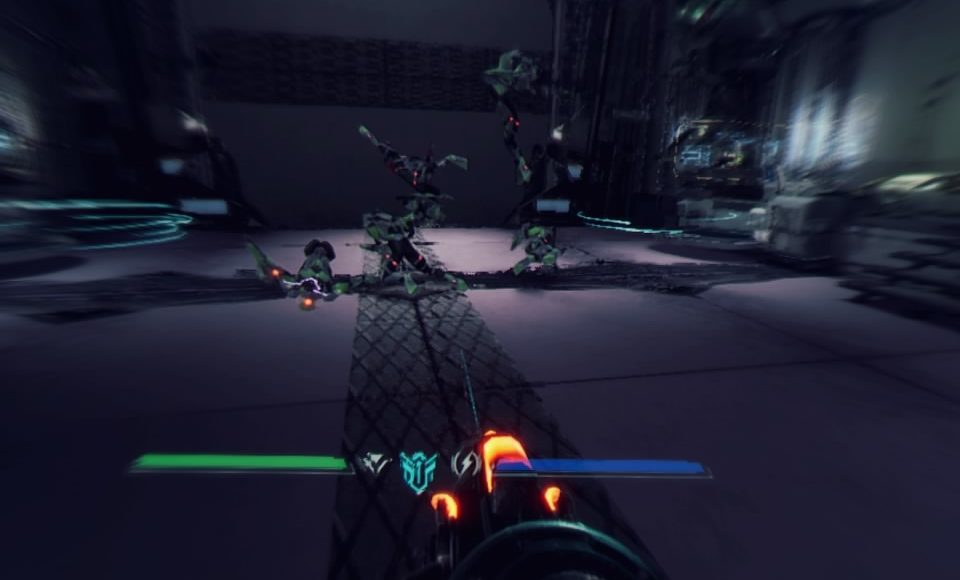 Slo-mo mode allows you to kick a lot of ass!

Throughout the game, you will find a few weapons, though you can only select 2 for any given stage, 1 main weapon and 1 stronger one, both with unlimited ammo, though you still need to reload, and each weapon has its own unique stats typical of the guns you find in any shooter. As this is a nav point based shooter, it plays like the light gun shooters of old with you teleporting from point to point which makes sense given that you are reliving another’s memories and I always appreciate when games explain away their specific mechanics with story devices. As you move from point to point, enemies will come out of doors, tunnels, or really from anywhere, move to their pre-determined position before unleashing their attacks. They rarely take cover, and this goes for you as well as you are more often then not just standing in the open taking on all comers without a barrier between any of you. The slo-mo mechanic is fun, but ends up feeling cheap as, while in this mode, many enemies can be killed in one shot because their vulnerable spots are highlighted. My issue with this is that those vulnerable spots aren’t shootable outside of slo-mo turning enemies into bullet sponges and that mechanic becomes more of a crutch because of that.

There are some highlights in here with the boss battles being a few of them. Each one has nav points places around a central area with you moving from point to point (in slow motion), avoiding attacks while hitting the boss’s weak spots as they come at you in unrelenting force. The story is epic, but so hard to follow that I really had no idea why or what I was doing throughout the game except shooting bad guys. A few of the stages are just cut scenes that push the story along, but I’m telling you, it’s really hard to follow, especially when combined with the voice acting and translated narrative. By the time the game concluded (I think around 4 hours) I figured out most of what was going on, but it was so confusing up until that point that it’s more of a disservice to the game than positive point. 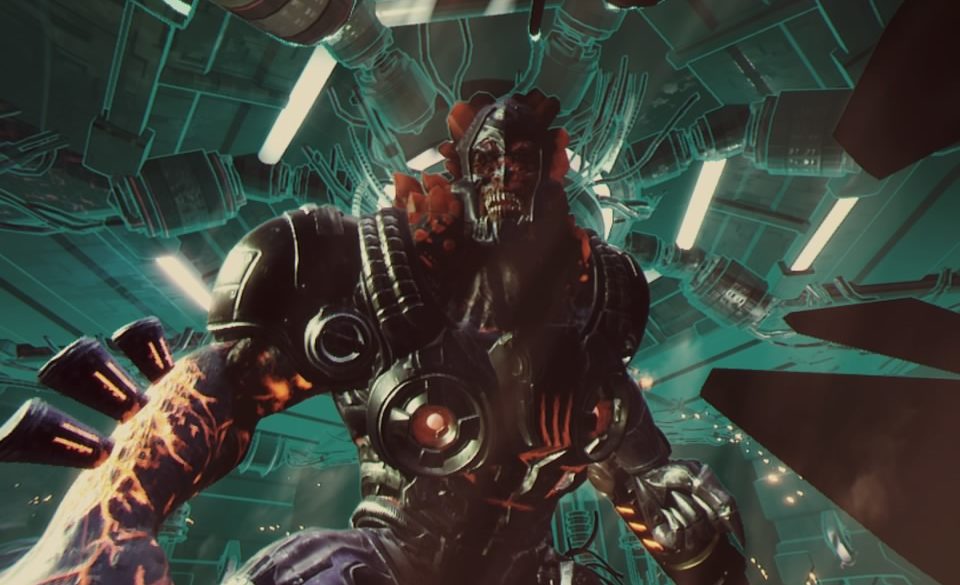 This guy is UGLY!

Unearthing Mars 2 is a competent light-gun shooter with some fun mechanics that just keeps doubling down on its shortcomings. The first half of the game is just shooting peon after peon which is fun, but with only a handful of enemy types, it starts to feel repetitious. The latter half still includes shooting lemmings but has a few more boss battles to mix it up and a heavier emphasis on the story. If you are in the mood for some mindless light-gun action, then this does accomplish that, and the few highlight moments are pretty slick so go in with your expectations lowered and you’ll have some fun with this.

What would I pay? $20 for this is perfectly fine, the story is overly complicated and confusing, but it is a full campaign shooter that for the most part works. Aim controller support is always a win and the presentation is solid enough to make you feel like you are in some epic battles.

Winking Entertainment provided The VR Grid with a code for this title and, regardless of this review, we thank them for that!