***Full disclosure: Not only am I a die-hard fan of the Killing Floor series, but I bought this version which was designed for Oculus Rift, and I play it using the ReVive software. Timed exclusives are a pity, and I don’t see anything wrong with using ReVive- however, there were some control and UI glitches I experienced which could very well be attributed to ReVive and not the game itself. For that reason, I will be reiterating this later on when discussing these glitches, as many simply might not be the game’s fault.

Killing Floor: Incursion is a terrifying and visceral first-person shooter, created as a VR-focused, single player expansion for the franchise. Sadly, it often sells itself short and doesn’t come close to stroking its true potential. Still, it’s one of the highest quality, most brutally immersive VR shooters I’ve played in a long time.

The general Killing Floor franchise follows a broad story: a lead scientist for “Horzine Biotech,” in underground London, went mad and brought about the apocalypse by creating an outbreak of “Zeds” (genetic mutant freaks), which wreak constant death and destruction across Europe. A small group of vigilantes realized that they can’t rely on the government to fix the mess, so they go out guns-blazing to clean up the infestation themselves. 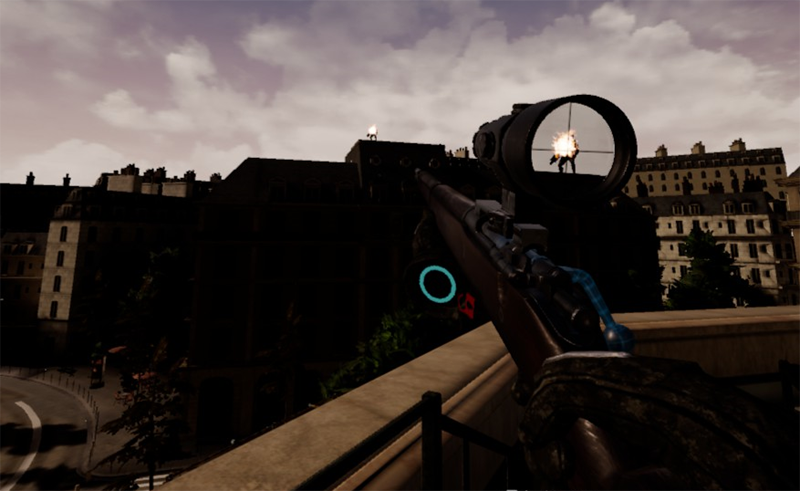 Even the sniping mechanics feel incredible

You are placed  in the shoes of a badly injured Horzine employee, who (during surgery) is put into a zed-killing training simulation. Things take a turn for the disturbing when your supervisor (communicating via drone) tells you that, apparently, if you die in the simulation, you die for real. You must fight to survive, using an array of firearms that are limited in number, but cover most of the bases in weapon variety: there are knives, pistols, an axe, a shotgun, an assault rifle, and a sniper rifle. That’s it, though. Compared to the vast arsenal available in previous Killing Floor games, it’s a little disappointing. Still, the VR-utilized weapon mechanics are stellar. Knives can be thrown as well as swung, and most weapons can be held with two hands- even the axe, which feels excellent. The shotgun must be pumped, and the sniper rifle must have its bolt physically pulled back. All these mechanics feel refined, tested, and polished to a near-perfect VR shooting experience. Sound and animation designs are also top-tier, allowing for smooth and satisfying shooting that feels as visceral as it gets. One of my favorite gameplay elements they added for VR is the ability to not only punch zeds, but smack them with your gun in a way that feels like a realistic gun-butt.

Complementing the excellent gunplay and weapons are the gore mechanics. Like previous Killing Floor installments, your shots accurately register as hitting specific areas on zeds’ bodies. Not only can you shoot off any part of their limbs or head, but you can witness bits of skull and brain fly off before their head explodes, blood and gizzards totally painting the area. Zed time (slow-motion) makes a comeback in Incursion, and feels as satisfying as ever. Watching enemies’ heads explode in slow-mo is an effect so cool, and so well-done, that it results in me saying “oh wow! DAMN!” aloud, to myself, almost every time that zed time is triggered.

There are a wide variety of different zed types that all attack you in unique and terrifying ways. Unfortunately, some infamous zed types, such as the bloat and siren, have been completely omitted. The spawn pacing was also clearly designed to reflect VR, which I’m impartial about. For example, scrakes and fleshpounds (tank-like enemies, with a chainsaw or hand-blenders, respectively) each only spawn once throughout the whole game, as boss battles for their respective levels.  Incursion’s zed hordes have a depressing habit of being much, much smaller than those of its predecessor. This makes sense in VR, but it still feels like a missed opportunity. 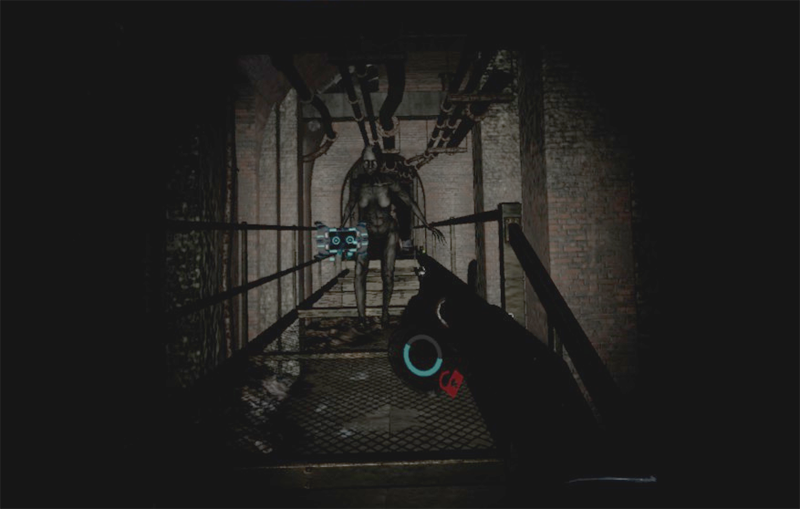 Is it just me, or do 99% of high-quality single-player games include a sewer level?

The original version of Killing Floor is a wave-shooting co-op survival game, while Incursion is more like a single player campaign (although it includes co-op). It’s driven by a rich story, puzzles, and a sense of linear progression. Incursion’s well-written story goes deeper than the original, and treats the narrative as if it were more than just action-bait. This game is a prequel, and addresses how the vigilantes (who you play as in previous games) came across each other and united to fight the zeds as a team. This is a crucial, and awesome, story arch to follow, especially for a super-fan such as myself.

The only problem with the story is that it could’ve been better fleshed out. There are some objective milestones that I felt I hadn’t yet deserved by the time I reached them, and I feel like (based on the story, which I won’t spoil) the personal character development could’ve been way better. There’s a reasonable amount of content, but still nowhere near as much as there could or should be. Contained are four levels, and each took me around an hour to complete. Although this is enough content to feel like a satisfyingly complete game, it’s certainly not a long one. I didn’t feel cheated by the content, but I was a bit disappointed: all four maps are redesigned versions of classic Killing Floor maps, but that leaves me begging the question: Why not more? Killing Floor 2 has more than a dozen maps, and the four included in Incursion are by no means the only ones relevant to the story. Yes, I understand that each level was redesigned from the ground up for VR and single-player, but it doesn’t feel quite like there are enough levels to warrant a full campaign. . Another problem is that it ends on a shockingly abrupt cliffhanger- although, technically, it leads directly into the events of Killing Floor 2 (where the characters group up to fight zeds), so the canon of the story still fits together without leaving unanswered questions. Still, the abruptness to the ending left me hungry for more content. 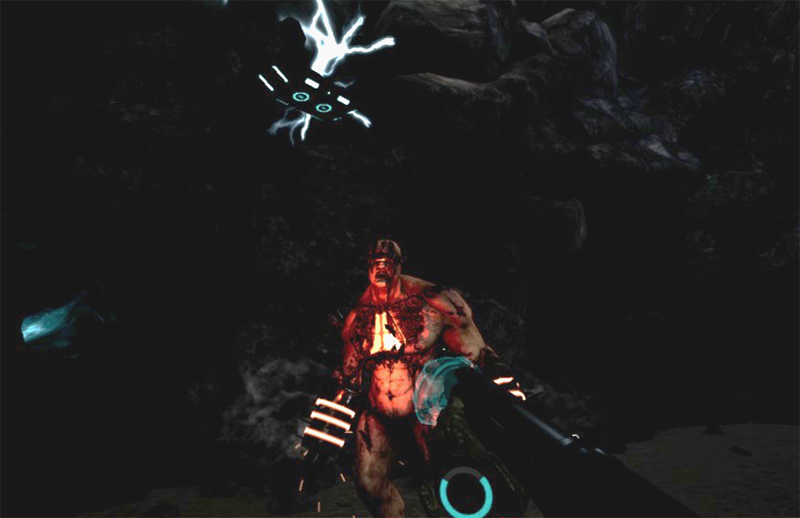 The original Killing Floor games were marked by many unique game mechanics, such as its survival mode, perk levelling system, and shop keeping. These, as well as other key features of Killing Floor 1 and 2, were completely taken out of Killing Floor: Incursion. Make no mistake; these mechanics and more, if included in Incursion, would improve the game exponentially. It’s worth noting, though, that this isn’t simply a VR version of the original: it’s a fully re-done, re-designed game that is unique from the original franchise in the best way possible.  Built from the ground up, it feels like a fully independent game, with its own merits that stand separately from those of the original.  The pacing of Incursion’s campaign is something that I’m impressed by. Breaking up violent segments are puzzles, which can occasionally be frustrating but are usually not half bad. Although the lack of bigger hordes can sometimes be too easy, the enemies’ spawning rates nonetheless always feel fair and reasonable. The game’s fundamental level design is a degree of quality that I have rarely see outside of single-player classics such as Half Life or Bioshock. Although it’s an overall linear campaign, you never feel trapped on rails, and you’re able to explore whatever open rooms and areas that you see in a level.

This is improved further by Incursion’s stunning graphical and environmental design. Lighting, shadows, and anti-aliasing make this easily one of the best-looking games I’ve ever played in VR. The environments were delicately crafted to create the most intricate and believable world imaginable. Despite being a post-apocalyptic world, the  design breathes a ton of life into the world. Between its graphics and its level design, this is among the most immersive VR shooters I’ve ever played. 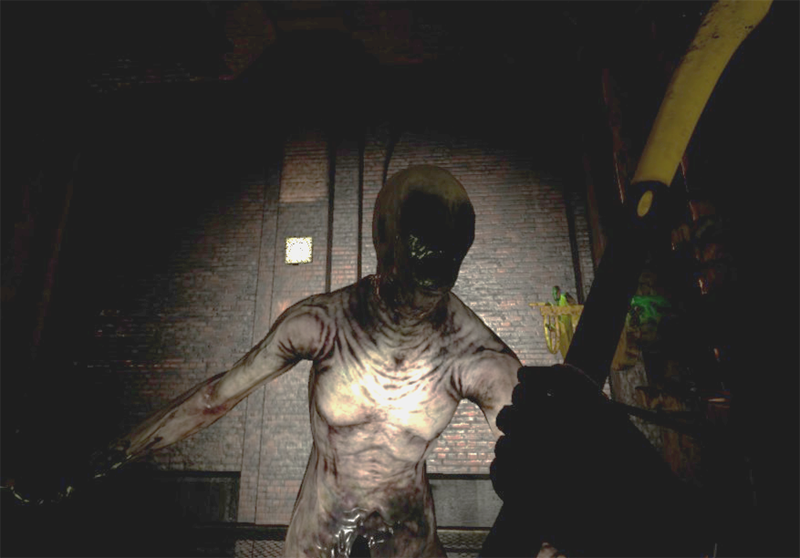 Although it’s crafted as a uniquely single-player experience, Incursion includes a solid cooperative mode which allows friends to join your campaign, working just as you’d expect. It’s pretty much identical to playing single player, just with other people. There are some problems with this, as co-op is nice- but adds little-to-nothing to the overall experience. First, as of this review, very few people play it. The only servers I could connect to were in distant countries, resulting in chronically bad lag (in my experience).  Besides the ability to revive teammates (which you can technically do on yourself in single player), nothing sets aside the co-op as being notably unique. The only thing that makes it a worthwhile addition to the game is the simple fact that you’re capable of playing with other people.

Lastly, Incursion’s user interface has some problems, but overall works acceptably. Its cardinal sin is the forced ability to hold a button on your controller which makes your hand point, like a hand-gun: It took me half an hour of periodically yelling at the menu, and giving up on navigating it, before I realized that you actually have to hold the aforementioned button in order to “click” anything in the menu. This menu is projected holographically on your wrist, a mechanic which would work perfectly: if it wasn’t for the required usage of your pointer finger to actually navigate it. The options in this menu are diverse, however, and cover everything you’d want from such a menu. Additionally, the game can sometimes suffer from seemingly-random lag spikes, though it usually smooths out and runs normally. 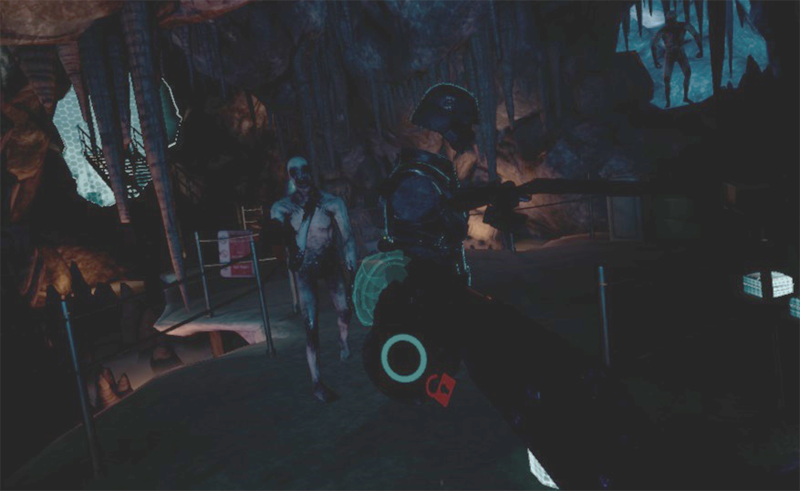 I’ve gotta admit, it feels cool to save your co-op partner from a zed behind him (above)

The one major UI design flaw that had a negative effect on my game experience is the locomotion: You can choose between free locomotion and teleporting, but neither of these works well. Free locomotion uses radial mapping on your movement key (and, on the Vive, requires a swiping motion on the trackpad), feeling cumbersome and oftentimes ceasing your movement at random. Teleportation suffers from the extra-step problem, arbitrarily forcing you to press one button, aim your movement arc, and press a separate button to confirm the teleport. Although this movement feels terrible, I must mention, however, that these issues likely have more to do with ReVive than the actual game, since porting joystick controls to a trackpad without extra configuration could naturally result in the aforementioned issues. The same potential issue applies to the lag and menu issues, and if you’re playing on Oculus, there’s a chance that these UI flaws will not affect your experience as much as they affected mine. My issues here should be taken into your consideration, but I can’t use them as a fair hit against the game.

What would I pay?  Although I’m freakishly obsessed with the Killing Floor series, I wouldn’t pay more than $30.  While this includes a nice amount of (awesome!) content that’s better than I’d expect from most VR shooters, it’s much less than I’d expect from a game listed at $40.