I am not ashamed to admit that I have had my share of detentions in school back in the day. During that time, I may or may not have come up with a few ways to kill the monotony using the school supplies at my disposal. However, the folks over at Cool Beans Studio take this to a whole new level in Project Shield. So stop tossing pencils at the ceiling and get ready to block and chop your way to the high score slot! 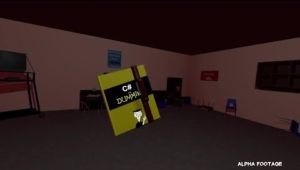 Your trusty shield is a programming book for dummies.

Your goal is to rack up as many points as you can by blocking oversized pencils that are launched at you from all directions. While this is a simple task at first, over time the pencils will start coming at you progressively faster. Each time your hit, you lose one of your four hit points. The only way to revive lost hit points is to catch apples that are randomly tossed at you in the same fashion. Unfortunately, if you hit them with your shield instead of catching them with your free hand, they become useless.  Yes, as useless as your pencil riddled corpse on the classroom floor.

The game consists of only one room and you will find yourself standing in the middle surrounded by six pencil sharpeners that launch the oversized number 2’s at you in random succession. Each time you think you have found your groove, things speed up and it can be difficult to turn and protect yourself even though your shield, a copy of C# for Dummies, is a decent size and the audio cues let you know what direction the onslaught is headed from. I found myself blocking one projectile while turning my head as I looked for the next projectile but even this wasn’t enough to keep me alive in the end.

The tools at your disposal include your shield and a ruler that can sometimes randomly be shot at you. Like the apples mentioned above, you must catch the ruler with your free hand or it is wasted. Once you have it, it will provide you with a means to slice the pencils in half for a limited amount of time. The points for doing this over simply blocking the pencils are doubled and more importantly, this allows you to cover two of your sides instead of one.

The controls are straightforward and intuitive. You simply move your shield hand to block and your free hand to catch. If you’re armed with a ruler, you can hold it up and let pencils destroy themselves or slash it like a sword. The apples you catch do need to be eaten, to do this you will need to raise it to your mouth. The controls felt very responsive and I didn’t experience anything that would have negatively impacted my gameplay. This made Project Shield a great introductory party game for first time VR players.

Graphically this game was pretty basic with no real atmosphere unfortunately. Basically, it’s just like any grade school room ever. Part of me would have liked to have seen some background distractions going on even if it made the game more difficult. During the course of the game, nothing really changed in the visual department and that felt a little unfortunate. The audio was good and the cues provided by the pencil sharpeners proved to be absolutely necessary. That also means that having good surround sound is also pretty handy. No sounds distinguish the pencils from the rulers or apples and having a different sound would have definitely made a difference. In my opinion, this would make the gameplay a little more enjoyable overall. 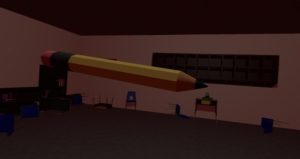 While Project Shield is a limited experience, it does make for a fun party game and supports up to six players locally. The names and scores are displayed at the end of the game and with rounds that only last a few minutes on average, no one is left out of the action for very long. Unfortunately, the limited gameplay means very little motivation to play more than one or two rounds. Project Shield is currently listed as an early access game and I really hope that some variations of gameplay are in its future.

What would I pay?   With a little more variation on gameplay and some sound tweaks this party game would probably have me buying a copy for $1.99. Currently the asking price is $0.99 and I am okay with that seeing as how this is an early access title and the game, limited as it may be, is actually pretty fun.

Cool Beans Studios provided theVRgrid with a review copy for this game and, regardless of our score, we thank them for that!