I was never really into escape rooms before VR, but that all changed with I Expect You to Die and since that games launch, I eat these up like candy.  I love the challenge offered and testing my wits in variety of scenarios usually to save my own butt or solve a mystery.  With that said, they aren’t always winners and keeping these puzzles fresh across multiple games is a huge task and I don’t envy any developer when they decide to make a puzzle-centric game.  The DOOR is just that with you playing as the Father of a young sick girl, willing to do anything to save her life in what turns out to be a series of twisted and bizarre events. 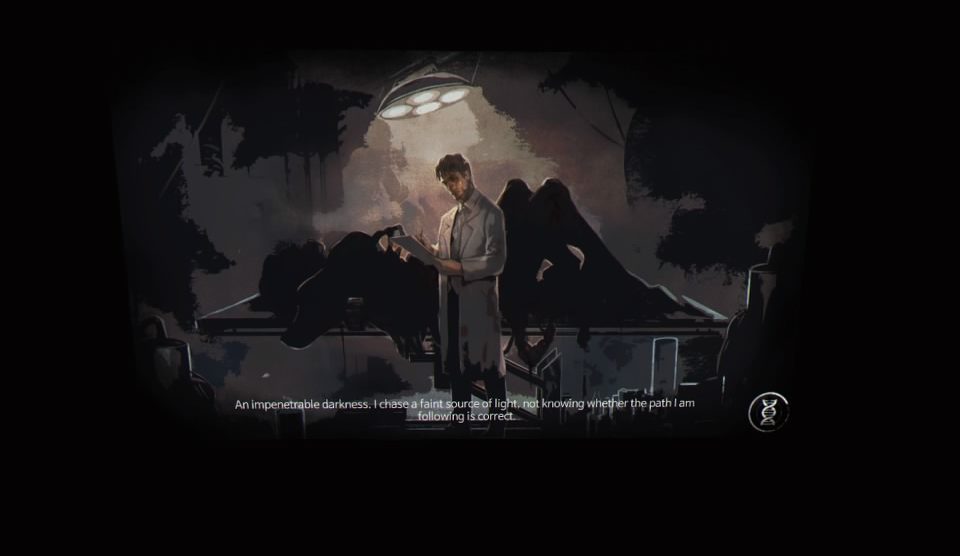 Things get dark, quick in this game.

The DOOR is a mostly stationary affair with the DS4 as the only control option, which does take a little time to get used to.   The triggers are used to turn, not the thumb sticks, and you must look around each room you are in and highlight objects by looking at them.  In this regard, The DOOR plays like a very simple mobile game, underutilizing the immersion factor of VR.  With that said, each area or spot you are in is very contained so should you need to get a closer look at something, or just change your angle, The DOOR is designed around using room scale, should you wish to use it.  Later rooms offer a few spots to move around too, though only nav-point teleportation is used putting you in front of whatever that area wants to show you.  If you want to play this seated, there is no issue with that either, though I found standing and having that little extra freedom of movement helped me solve some puzzles and highlight items that were harder to grab while sitting due to the default positioning.  Many items can be picked up and rotated in front of you to look for much needed clues and while the controls are very simple, some of the puzzles are not, making for a somewhat challenging game.

The 1st room you find yourself in sets the stage for what is a trippy, jump-scare filled puzzler with varying degrees of challenge in each room.  Any items you need can be highlighted and either picked up put in your inventory or activated (like opening a drawer or reading a note).  You can combine items in your inventory to solve specific puzzles and once you have used an item, they disappear from your inventory or can no longer be interacted with.  In this regard, it can very easy to deduce what goes where and what may be needed to solve most puzzles involving specific items to perform specific tasks.  Where the challenge ramps up is when you need to use written clues to unlock combination locks that pepper the game.   A solution to a combo may just be the date marked on a nearby note, but later ones require much more thought and will put you to the test.  On more then a few occasions I got stuck on a puzzle and could not think of the solution for a long while, but like all the best puzzle games, when you do figure it out, it’s just so damned rewarding! 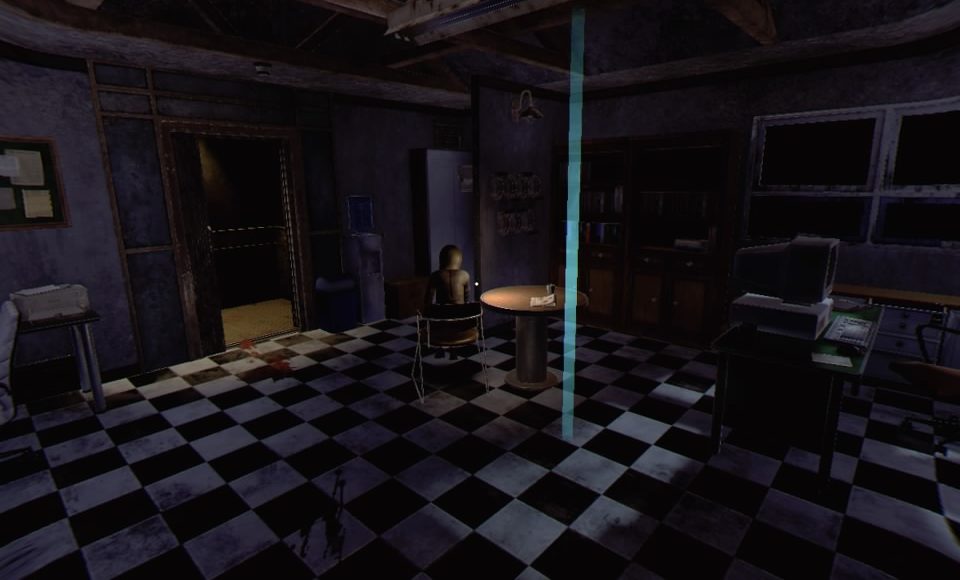 The stages/rooms look good with each carrying a fair bit of detail.  Shadow effects are in full effect though the levels are relatively static save for when puzzles change up your surroundings.  The story opens up with some still images narrated by the protagonist and it seems like a by the numbers story about a father doing anything to save his daughter, but the opening moments and the 1st stage set up that their is much more going on then what is initially apparent.  The games past events leading up to your amnesiac situation are told through the items scattered around, flashback sequences or some eerie visions.  The character models suffer a little bit with some stiff and limited animations, but they more then do the job of telling this twisted tale.  All the interactions with the environment are animated so whether you are pulling a box off a high shelf or just opening a cabinet you will see these actions performed before your eyes.

The music that accompanies the game is a slightly unnerving melodic series of tunes that always keep you on the edge of your seat though fade away into the background just enough to not really notice them as you focus on the tasks at hand.  Every action performed elicits the proper effects so whether you are turning on a rusty tap, opening an elevator door or turning on a generator, everything sounds like it should.  The voice-acting on the other hand leaves a little be to be desired as the language gap the devs had does shows up both in the narrative and the delivery.  It is by no means the worst I have ever heard, and story is never hard to follow, but the delivery makes for some unintentionally funny moments that breaks the tension the story tries to build.  Still, all in all, I thought the overall presentation was alright. 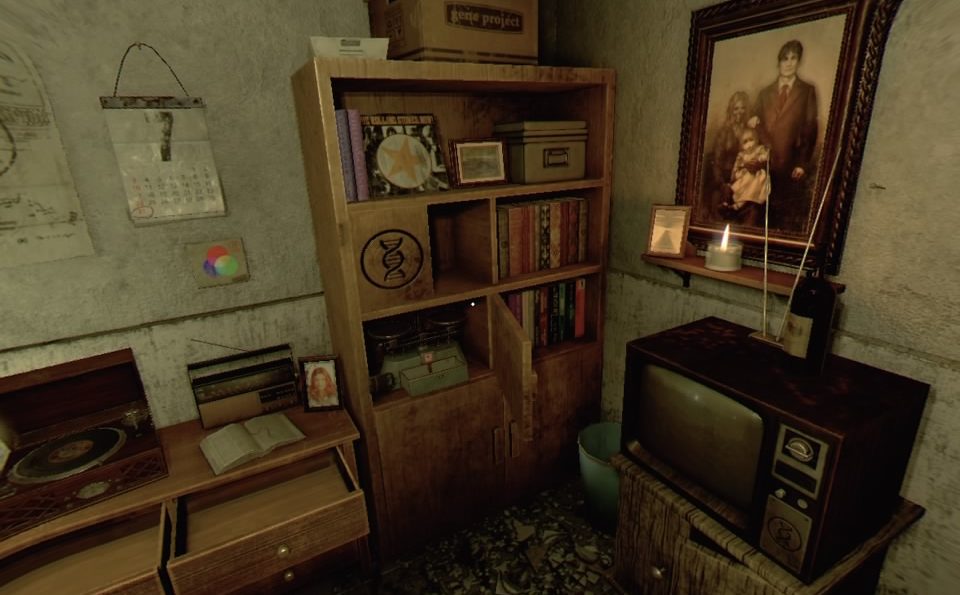 There is a lot explore, work through and find so pay attention.

As I said, the puzzle difficulty is all over the map with some being grade school easy while other may stop you in your tracks.  As you unlock more rooms, you may have to travel back to earlier stages to find items that weren’t needed before.  I have a little issue with this as when you are initially in those rooms, there is no indication of needing those items at anytime until you do, making it feel like an unnecessary and lazy way to extend the gameplay.  Even just a message like ‘I don’t need this now’ when highlighting said objects would let the player know they may need to come back, but when items appear to be just part of the background, only to be suddenly needed later, it’s a little confusing. 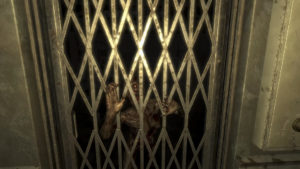 I like The DOOR and last puzzle in the 1st room sets the stage for what lies ahead in the game.  Some puzzles are easy and some are very hard and when you do find yourself on your way to the next room, it’s a very satisfying feeling.  The story is nuts, though disjointed, but I still dug its surreal narrative and by the time I finished the game, I had invested around 5 hours in figuring out these mysteries and was satisfied with the conclusion.

What would I pay? While I did enjoy my time in the game, the price does seem inflated.  For $35 I would expect a higher quality experience, especially when looking at other VR escape-room games.  I’d be much happier with a $20, maybe $25 price point.  With that said though, if you crave some brain tickling puzzles, the ones in The DOOR aren’t to shabby!

Skonec Entertainent provided a code for this title and, regardless of this review, we thank them for that!