Have you ever played an arcade game as a kid, fumbling for quarters in order to avoid losing, and fantasizing about jumping into the machine and blasting enemies head-on? Your fantasy can now be a [virtual] reality! Operation Warcade is a VR first-person shooter that takes some of the most unique mechanics I’ve ever seen, and uses them to convert a hyper-generic rails shooter into one of the most exciting virtual reality shooters I’ve played to date. Paying homage to classic arcade shooters such as “Operation Wolf,” it’s centered in a pseudo-realistic VR arcade, spiced up with interesting sci-fi mechanics. While sometimes tiresome, it’s extremely fun, and one of the most innovative VR shooters in recent memory. 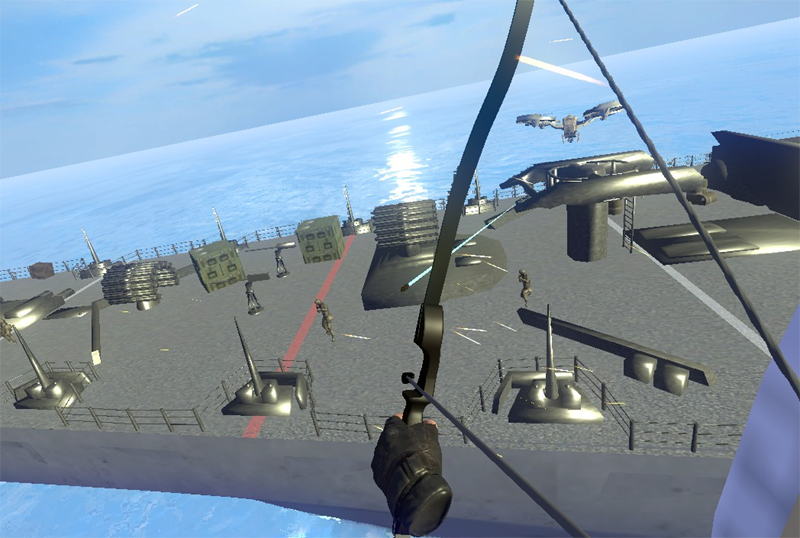 Riding a helicopter, in first-person, wielding an explosive bow…am I still in the arcade? This is awesome!

Operation Warcade’s core gameplay is little more than a standard rail shooter, an environment panning by, containing hundreds of enemies who mindlessly run into your line of fire. You’re given an uzi in one hand, and grenades in the other. There are several other weapons and grenade types, which can be temporarily equipped after shooting specific floating cubes. Offering bows, a Half-Life-style gravity gun, bullet time, and much more, your arsenal is robust- although not initially evident. Operation Warcade makes this more interesting by adding three “immersion points” per level. Shooting these power-ups causes you to warp through the game’s matrix, playing as if you were physically within the environment.  These moments are exciting, varied, and well-executed. Sometimes you’re given a new weapon, contingent with the first-person environment (IE: warping to the top of a building with a sniper rifle). You often ride in the back of many different vehicles, which are excellent turret sequences. Taking this a step further, some immersion points even put you in the driver’s seat. Steering a jeep in one hand and firing an uzi through the windshield with the other is thrilling, but soaring through the air in a jet while spraying missiles at an aircraft carrier is as fun and visceral as it gets.

Operation Warcade starts out in a literal arcade, with people dancing and playing various games. In its center are two machines, running the same game in different modes. “Immersion mode” stations you in an isolated booth, panning through the action as if gazing out a moving window. “Classic mode” keeps you in the arcade, aiming at the game’s two-dimensional monitor as if it were a real arcade game. Classic mode also has an optional “3D” mode, making it appear as if you’re playing with red-blue 3D-glasses. Although an extremely cool option, 3D in classic mode was frequently nauseating for me, and only made it harder to hit enemies. Still, it’s a nice option and doesn’t detract anything from the game. Regardless of how you play, the baseline rail shooter is satisfying enough on its own. 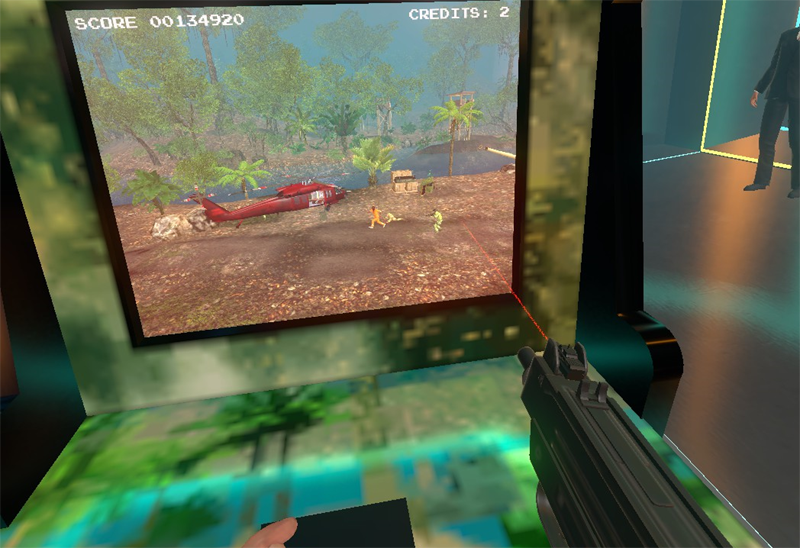 While the gameplay itself is largely the same as in the campaign, 2D classic mode offers a fresh take on it

Operation Warcade never gets old, which is great due to its length. There are six environments in the “immersion mode,” each of which contain six levels. It took me around seven hours to complete the campaign’s 36 missions, which is impressive for any VR title- but there’s more. Whereas immersion mode is the baseline campaign, with segmented levels and unlimited retries, the classic mode is “hardcore” with each environment being condensed into a single level, and you have a limited number of retries. Both modes have the same overarching environment, but feel like totally different games. Classic mode added a few extra fun-filled hours to my time played, giving me about ten hours of gameplay before I’d truly experienced all that Operation Warcade has to offer.

This would be impressive on its own, but it’s also extremely addictive. Even before completing the game, I’d spent hours replaying each level: fighting for the highest possible score, disgruntled over having missed a few enemies, or being shot out of an immersion point before completing it. Even having already beaten the game, I’m aching to keep playing as I type. It essentially motivates you to be as flawless an action-hero as you can, and rewards you for succeeding. Each level has a high score counter, varying based on many factors such as killstreaks. Each level also has three unique challenges, awarding you stars upon completion that can be used to both unlock weapon upgrades as well as new missions. Many challenges are fun and difficult, and earning stars is very rewarding.

Although an addictive way of motivating you to replay levels, this unlock system is also Operation Warcade’s biggest flaw. While some challenges (such as killing a certain number of enemies in an immersion point) are fair and enjoyable, some (such as freeing every hostage without harming them or dying once) aren’t just tedious- they’re almost impossible. These should be difficult, but not so much that they hinder the game. When the mission-selection screen is full of empty stars, it can be disheartening- but this “challenge” mechanic has worse problems. 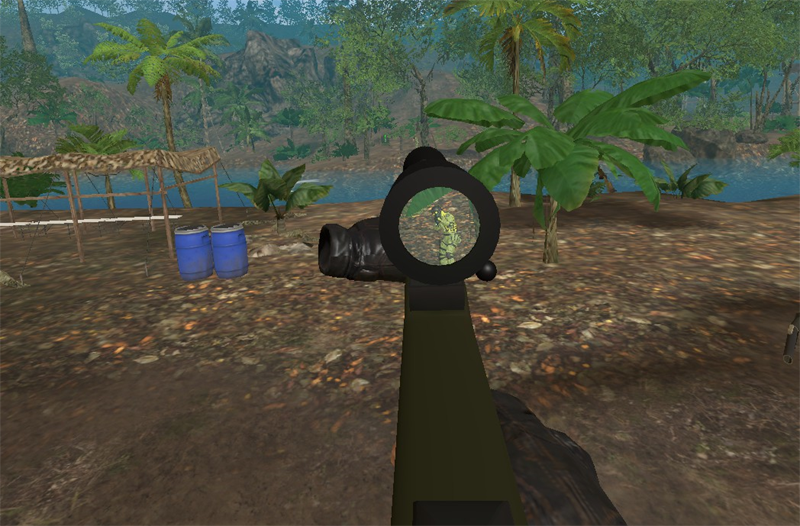 While weapon upgrades feel like nice bonuses, the requirement of stars for unlocking missions is problematic. You can’t unlock all the levels unless you’ve completed a majority of challenges. Since some of them feel nearly unbeatable, you’re required to replay levels several times to earn more stars- even if you haven’t unlocked some of the actual game yet. While the desire to replay levels on your own accord is a great sign that a game is both addictive and replayable, Operation Warcade doesn’t even give you the choice. Either become a pro and complete every grueling challenge, or risk missing out on everything the game has to offer. This led me to frequently feeling “stuck,” quitting out of sheer frustration many times.

Operation Warcade suffers from one other major issue, and that’s the arcade itself. It feels lifeless, devoid of any immersion. Besides playing the main game, there’s essentially nothing that can be done in the arcade. It would have been a perfect opportunity to add mini-games, playing other arcade machines, which NPCs can be found using. Although a great game, it feels like a missed opportunity that Operation Warcade is the only option you have. NPCs often cheer you on while you play, which is a nice touch. You can knock them around in wonky physics, a slight punch causing them to curl up and fly backwards. At first, this was hilarious: but after a while, it felt bitterly ironic that this is the only thing that can be done in the arcade outside the base game. 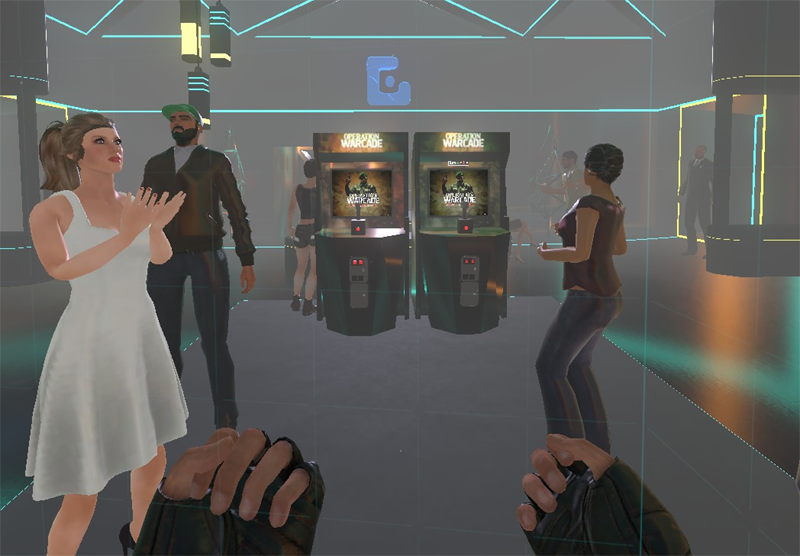 Is this seriously the best arcade the player lives nearby? They’ve got Operation Warcade, but none of the other consoles even work, and these people…they’re creeping me out…

While the whole game’s gimmick is that you play it from within an arcade, there’s essentially nothing about the arcade’s design that promotes this philosophy. The main menu can even be found within the machine, rendering the arcade environment totally pointless for anything other than reminding you what the game is about. It also suffers from general design flaws: wall textures are broken, NPCs have an unrealistic variety in height, and their monotone facial expressions resemble something out of George Orwell’s worst nightmare.

At the time of this review, the game’s user interface and optimization have some clear flaws, but work well overall. It’s easy to pick up and play, shooting your gun being the only controls needed. The one major UI hiccup is a lack of height calibration: when you start the game, your height is rendered wherever the headset is located. If this results in you being too tall to reach your gun, you must restart the game while wearing the headset so it auto-calibrates.

Despite the random somersaults which NPCs show off in the arcade, the actual game’s physics are phenomenal. Bits of debris fly exactly where explosions sent them, pummeling enemies in their wake, and there are even limited destructible environments. However, this may explain why, despite performance updates, the game still suffers from periodic frame rate drops. This is confusing, as its graphics are mediocre. They aren’t a show-stopper, and were likely designed to reflect on the retro-nature of many arcade shooters. Still, textures are outright hideous at times, and often made me question why a steady frame rate remained an issue. 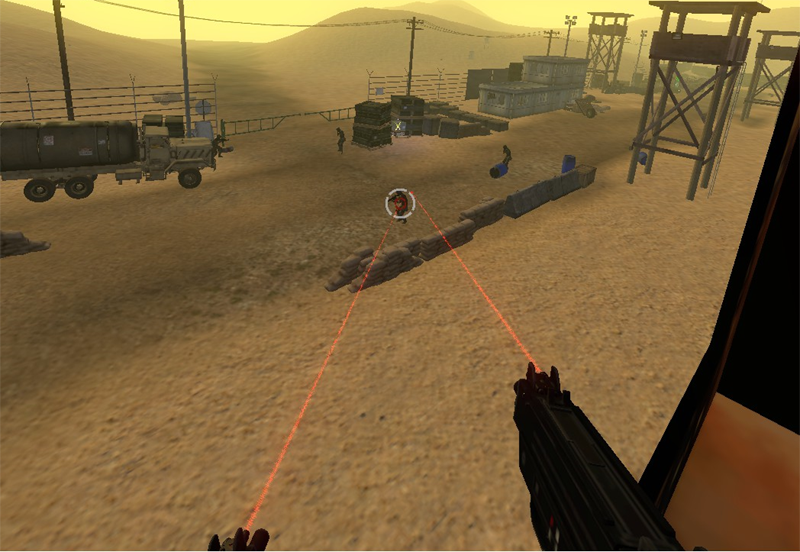 Gameplay is always satisfying and tense, and looks beyond the generic nature of this environment

The developer, Ivanovich Games, is competent, productive, and pays close attention to feedback. Until recently, Operation Warcade was unplayably laggy. After emailing the developer, I was reassured that performance updates would be released over the following three weeks. It was endearing to see such updates not only being promptly released, but also addressing the issue and completely eliminating lag (besides the aforementioned frame rate inconsistency). I am confident that by the time it leaves early access, Operation Warcade will approach perfection and fix many of the issues it currently has.

What would I pay? An addictive, adrenaline-filled shooter with some unique mechanics and a large amount of content, Operation Warcade is worth around $25 to me. Its asking price of $20 is unsurprising, but very reasonable. Despite its flaws, I had plenty of fun playing it. This is a must-buy for any fans of classic arcade shooters.

Ivanovich Games provided  theVRgrid.com with a review code for this title and, regardless of this review, we thank them for that!