Since its release last year, SUPERHOT VR has been making waves in the Virtual reality community with a new twist on the FPS genre.  SUPERHOT is a first-person shooter based on the concept of motion based time management, transforming you into a bullet dodging badass; shooting, throwing, and punching your way to victory.  This is a ‘go to’ VR experience using a simple yet masterful way to highlight everything the Oculus Rift can offer. 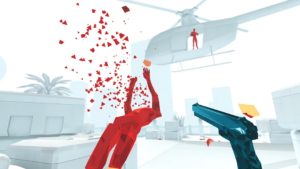 Headshots have never been sooooooo satisfying!

SUPERHOT is a level clearing game requiring you to play through several stages of intense action.  Each time you get hit or “die” you restart at the beginning of the level forcing you to do it perfectly until you complete every stage.  Currently comprising of 19 different level with multiple challenge modes such as ‘headshot only’, which can be activated to suit your challenge and playstyle.  Each level will have a set number of enemies starting in a set place and their actions will be determined by yours after that point.

Time in the game advances with the movement of the headset and motion controllers, allowing the user very immersive, elegant and smooth gameplay.  This feels like you have entered ‘The Matrix’ series of movies allowing you to dodge, deflect, and use the environment to or against your favor.  You will be transported from your living room to an action filled arena, turning you into a bullet evading action hero, bound and determined to complete your mission.

SUPERHOT VR is one of the smoothest and most polished games I have yet to experience in VR.  This put all of my gaming skills to the test, infuriating me at when it exposed my shortcomings, yet giving so much satisfaction when I surpassed them.  This game has engrossed me more than any other game before it, never once failing at immersing me in its virtual world…just be careful of your surrounding valuables and don’t break your hands on nearby walls, you’ll be flailing around like a madman.

Both visual and audio aspects are kept to a minimum which suits the games’ needs very well.  The look of the game is limited to a white environment with red pixelated enemies and black weapons.  This is in no way a bad thing and only adds to heighten the experience of fighting your way through the red menace.  The audio is limited to firing of bullets, shattering of enemies, and the ever so satisfying verbal ‘SUPER HOT’ when you are on a kick ass tear. 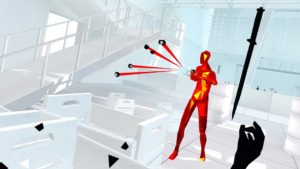 Look who brought a knife to a gun fight!

SUPERHOT VR will take you on a bullet dodging dance of death.  Turning your enemies’ own guns against them has never been so satisfying especially with the added challenge of completing every level without dying.  This aspect will frustrate you for your failures yet allow you to bask in the glory of victory.  SUPERHOT VR is my go to game to expose people to the wonders of virtual reality.  I have yet to have someone leave without a battle scar from punching something in in-real-life due to level of immersion and sheer excitement.  This game is a must have for any owner of an Oculus Rift and takes full advantage of the motion support available.

What would I pay?  $30:  I have never played a game with a higher replay value.  I was hesitant to buy it at first but after beating the game and exposing as many people as I can would happily pay this price.