Pistol Whip has been a VR staple for the last 2 years offering some intense rhythm-based combat that is unlike any other game on the market.  Since its original 2019 release, the game has nearly tripled in size offering more stages, more guns and more ways to play the game.  For those that aren’t aware, Pistol Whip is a merging of the rhythm and shooter genres that has you navigating through ‘on the rails’ stages while you shoot or smash the baddies in your way with bonus points being rewarded for taking them out to the beat. 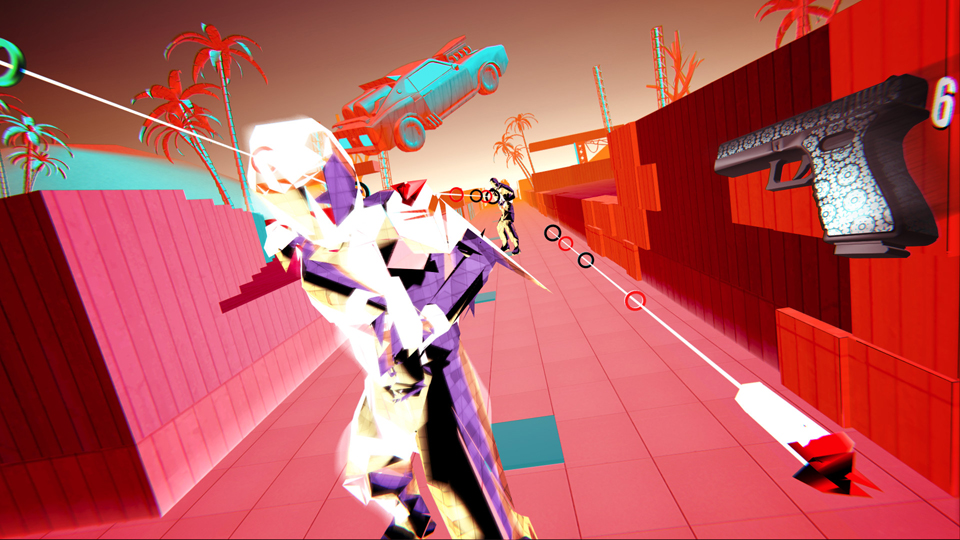 You gotta be quick or your dead!

Armed with a pistol, or pistols if you decide you want to dual-wield, it’s up to you to shoot everything in your path as you navigate through 1 of 28 musical tracks.  You’ll need 2 tracked motion controllers with the default mode in here only arming you with one pistol, though should you be feeling spicy, you can visit the gameplay modifiers to make things easier or harder for yourself with one of the many options being to dual wield.  Other modifiers turn off the auto-aim which dramatically ups the difficulty or reduce the amount of hits you can take to one or cause bullets to deflect back at you with those detrimental effects increasing your score modifier while the ones that make the game easier lower it.   Each of the tracks can be played on 3 difficulty settings with easy, for myself, being exactly that and medium offering some decent challenge but if you want to test the limits of your skills, Hard is where this game shines.  Most of the songs are available right away with the exception of the 2 included campaigns; 2089 and Smoke & Thunder, each has 5 stages that need to be unlocked by beating the stage before it. Regardless of the skill level you play on, not only will you be shooting the bad guys that appear all around in front of you, but you’ll have to dodge their incoming bullets and occasionally Pistol Whip any fools that get too close.  There are also obstacles to avoid by dodging left, right or by crouching that make this one of the more physical games I have ever played in VR.  Seriously, on hard mode I was moving around my play space like a character from the Matrix while bullets whizzed all around me, taking out seemingly endless amounts of enemies all while trying to do so to the beat and it was exhausting and exhilarating. 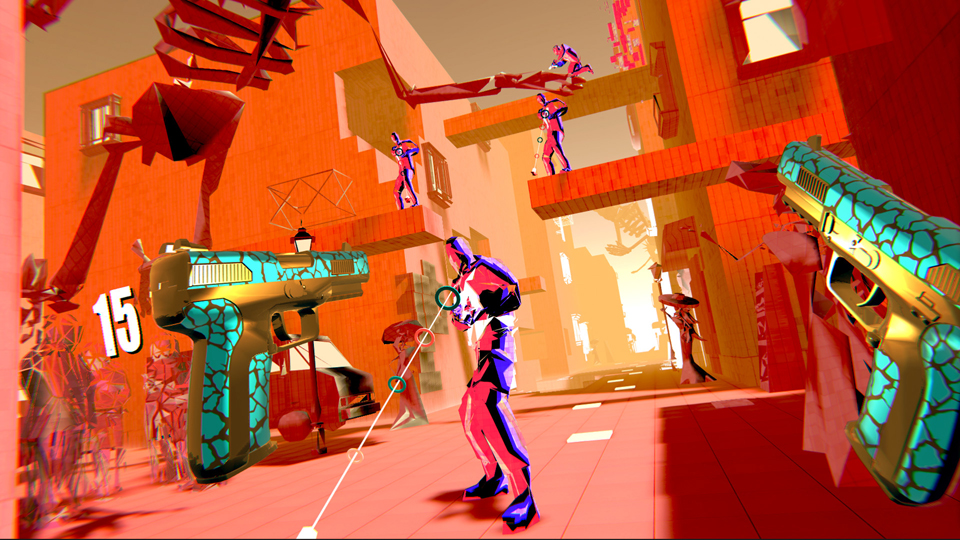 Each song is its own themed stage as identified by the movie poster selection screen which highlights the song and artist as well as stage specific details like beats per minute, enemy count and length of song.  The 2 campaigns each tell their own separate story, building upon the core gameplay by introducing new themes, comic-book cut-scenes and boss battles.  The enemies you face are little more then broken glass, connected to form humanoid shapes and upon seeing them, I was instantly reminded of SUPERHOT though the variety in which the enemies come in keeps each stage feeling fresh.  The campaign enemies go beyond the human as you’ll be facing turrets, ships, horse riding cowboys and a few baddies that mix up the presentation nicely.   The stages are all on the rails and take you through some very abstract and crazy settings that pulse to the beat of music.  You may start off in the city streets during a ‘day of the dead’ celebrations, in a church type area, an airship or just play in something completely bizarre and no matter which stage you play, the visuals are striking.  Bullets fly past you in slow motion, enemies will often appear far away or right in front you, demanding your immediate attention. Some run around giving you a chance to take them out before they fire, and others will spawn and shoot almost instantly.  Level design is key as enemies always spawn in the same places during a track so they may appear in odd formations all around you but this is by design as every single villain in this game is designed to be killed to the beat.

It’s a rhythm game, so the soundtrack is the most important aspect to making this a success and it’s solid but those looking for an expansive genre list may be disappointed.  The soundtrack is heavy EDM beats and dubstep which fits the action nicely and even though I didn’t care for all the songs, I can’t deny how well they fit the action…mostly.  With 28 tracks to choose from, there is a lot to like and I really dug the campaign offerings as they did venture a little outside of the base game’s soundtrack. Musical preferences aside, everything here is on point with guns sounding fantastic (you can actually select from a variety of gun sounds) and when I got into the groove, killing fools to the beat while dodging their shots was nothing short of a great time! 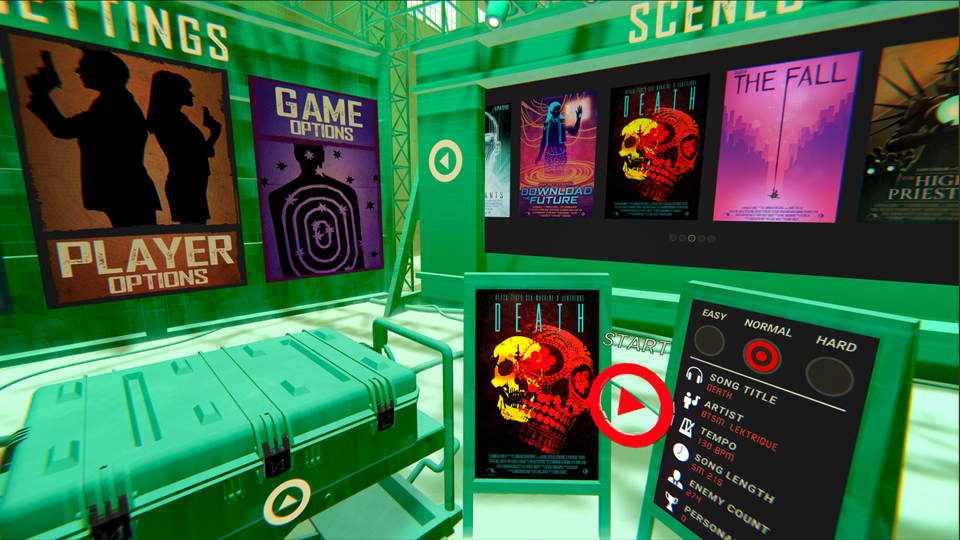 Plenty of options to choose from.

There really isn’t much to complain about in Pistol Whip as the game really offers some of the most intense fun you can have in a headset.   Playing on the PSVR, I have to mention The Move controllers, which can be troublesome at times.  I have my camera in a fairly decent setup and for the most part, my tracking was flawless but on a few rare occasions, my gun would go wonky as I pushed the limits of the tracking area.  On a similar note, would be to ensure your play space can accommodate your movements as I found myself near flailing to dodge incoming fire while dishing it out, moving way more than I thought I would. Beyond the various tracks and modifiers are the online leaderboards as well as challenge modes, which task the player with specific maps and mods once again mixing up the action.  It is a game that relies quite heavily on replayability but the number of ways you can customize the game as well as the campaign content, really keeps the replay factor at an all time high. 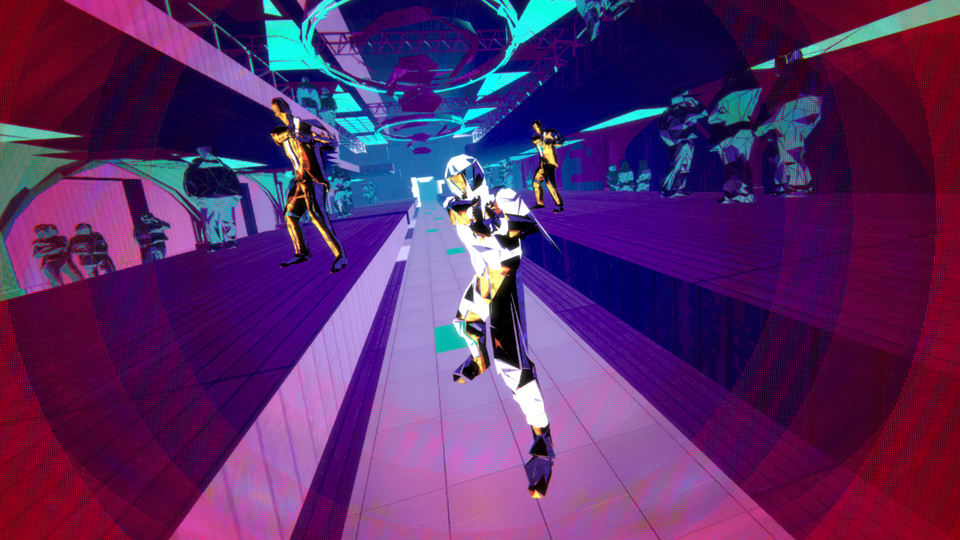 Pistol Whip is one of those VR titles that just could not work outside of the headset.  Its reliance on reflexes while wielding a gun (or guns) just couldn’t translate to the flat screen.  That alone doesn’t make it a great VR title, but the addictive and intense combat along with the plethora of songs & modifiers plus the motivation to shoot bad guys to the beat has me hooked.  It’s a rhythm game like no other, a shooter like no other, a VR gem like no other and I think just about any player who enjoys a little action, and a little sweat, will enjoy this immensely.

What would I pay? With all the content added since launch, Cloudhead Games has decided to up the price to $30 US and it is still easily worth that price thanks to the amount & quality of that content.  Pistol Whip is a must own title for anyone looking for some intense VR fun.

Cloudhead Games provided The VR Grid with codes for this review and, regardless of this review, we thank them for that!