As team-based shooters become more prevalent in VR, it can be hard to tell which one to choose as they can blend together.  Solaris offers refined simplicity with it’s E-Sports design, Hyperdash looks to be a little more freeform thanks to its unique movement mechanics with Population One capitalizing on some great Battle Royale gameplay, and those don’t account for the military sims like Onward, Pavlov & Contractors which are all solid titles as well.  Larcenauts is the latest in these game types taking a very science fiction approach, and clear inspiration from games like Overwatch, delivering a 6 v 6 Shooter that includes a few different game modes and a lot of style. 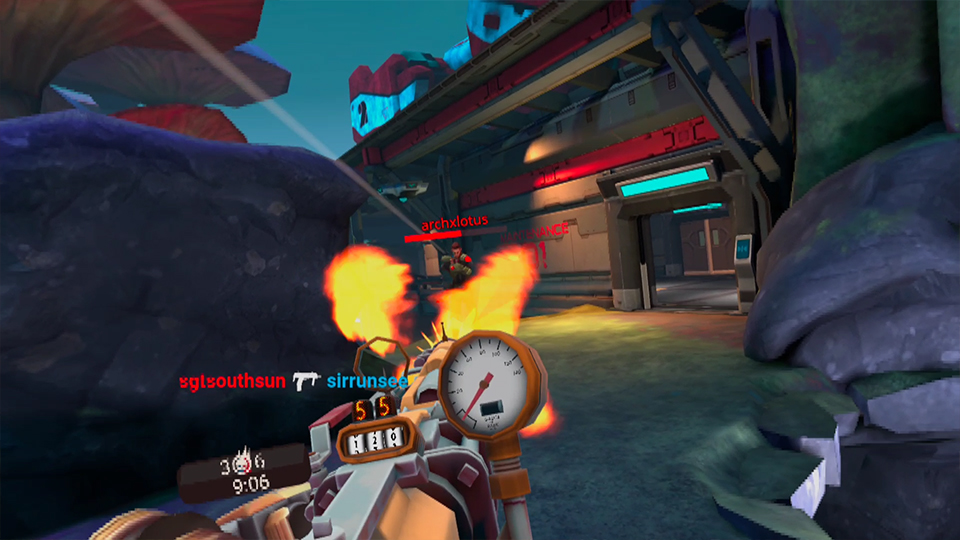 I’ll take a machine gun or a Rifle ANYDAY!

If you have ever played any 1st person titles in VR, than you already know the basic controls in here though there are a few specific mechanics that add a fair bit of unique flare to this one.  Scattered around the map are tether points you can magnetically grapple to allowing you to quickly move to higher areas almost instantly by flicking a thumbstick up while you are looking at it.  Smaller heights can be scaled by that same action allowing you to climb on top of boxes and other smaller objects giving each player a fair bit of freedom when navigating the environment or you can duck as well though I never really found a need for that too much other than just to make yourself a smaller target. Each player’s weapons have 2 fire modes, a standard shot and a 2-handed power shot that is activated by holding down the trigger on your off-hand and needs time to recharge once used with ammo being scattered around and reloads controller by the press of a button.  Initially you’ll only start off with only one character to choose from with all the others being unlocked by playing the game and earning the variety of in-game currencies including Solars (money), infamy & experience.  You can unlock or purchase new specialists, with experience unlocking newer levels for them, slightly increasing their stats with each new level while infamy gets you new player skins and loadouts and on top of all those are loot boxes that can give you any of those upgrades and are earned by completing in-game achievements and just playing.  There are thankfully no micro-transactions in here so it’s all about getting good and playing lots.  Once you unlock more specialists, the differences between them become apparent with each of the 8 characters each having their own pros and cons. Some characters move at different speeds, are armed with various weapons (or none at all) and each comes with special abilities with additional ones unlocked through progression.  Calima, the starter character, can dash around the map, Evander can go invisible and Thal, a large robot can drop shields with each one having more abilities to choose from, once you unlock them.  What this all breaks down to is the most in-depth multiplayer VR game I have ever played when it comes to unlockables and progression as almost every match will reward you loot or new unlock be it a character, load out, power or character skin or just good old fashioned experience points.  Lastly would be the 3 modes of play which include Team Deathmatch, Uplink aka Capture the Flag and Refuel aka territories, which will be chosen randomly when you start or join an online match. 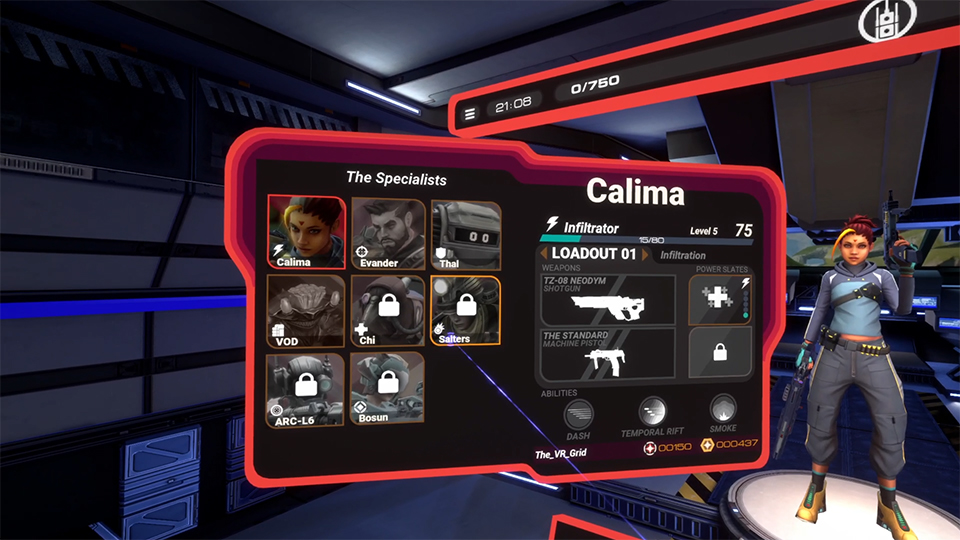 Choose your specialist and modifiers!

Larcenauts looks sharp on the Quest 2 headset and that same fidelity is carried forward on the PC side of things but on the PC just about EVERYTHING looks better thanks to improved textures and static lighting effects that make the overall presentation much stronger when playing tethered.  There are currently only 4 stages though they are substantial in size and carry with them a fair bit of subtleties that will take some time to master like specific paths, grapple points as well where the flag and capture points will be.  The characters all animate quite nicely and look very sharp, reminding me of the models we saw in Starblood Arena (RIP) and come in a few human forms in various sizes as well as larger guys like VOD and Thal who can take a few more hits, but are much larger targets on the battlefield.  The art style here is on a the slightly more cartoonish side with a nice pastel color palette used to give everyone and everything a very polished look and hides the lacking finer details on the Quest side quite nicely.  You’ll play in a cave system, fungal forest and a couple facility type arenas and depending on the where the action may be happening, you may have to walk for a few seconds to catch up to the fight but considering just how many paths are in any given stage as well as the verticality that comes with that tether system, the stages feel much larger than they actually are.  Some may have doors that will need you to manually open with a free hand or pumps, computer screens, plants and other detritus that just add to the presentation in each stage.  Your HUB area is a hangar of sorts with various stations for all the games elements including a store where you can purchase additional cosmetics (once again using earned in-game currency only), your player customization selection (complete with 3 loadouts each) as well as areas for opening loot boxes, checking out achievements and your infamy.  All in all, both versions of the game look great, but I can’t deny just how much more the games visuals popped when playing through my PC. 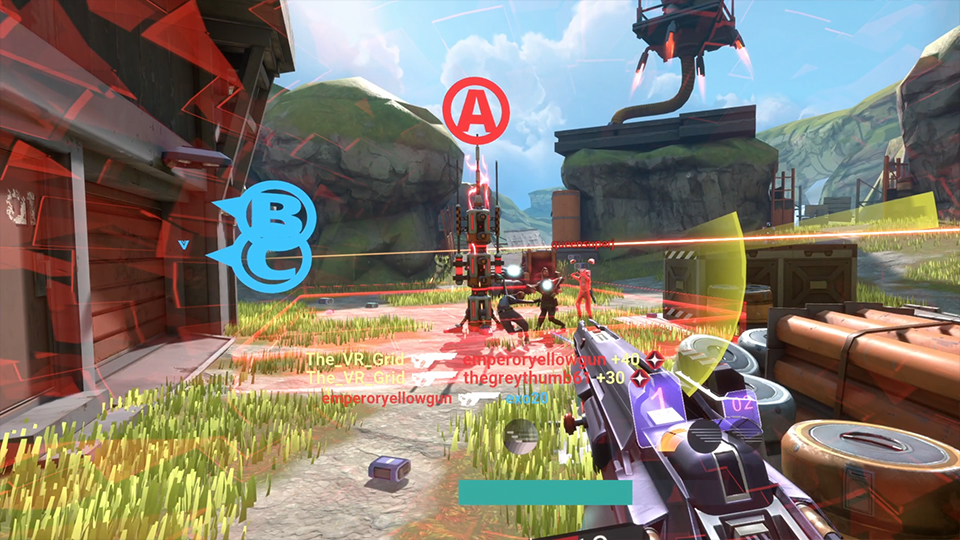 On the audio side of things there isn’t too much to get excited over, but everything works and compliments the action wonderfully.  The character you choose will drop exclamations and one-liners infrequently depending upon your situation and an electronic soundtrack plays before, during and after matches and had me bouncing my head to the beat on more thana one occasion.  3D audio is present, but given the gameplay, it’s easier to find your foes by where your pals are or if you are getting shot and of course, full voice chat is in effect so you can talk with your team and if you want to win, you need to chat with your team! 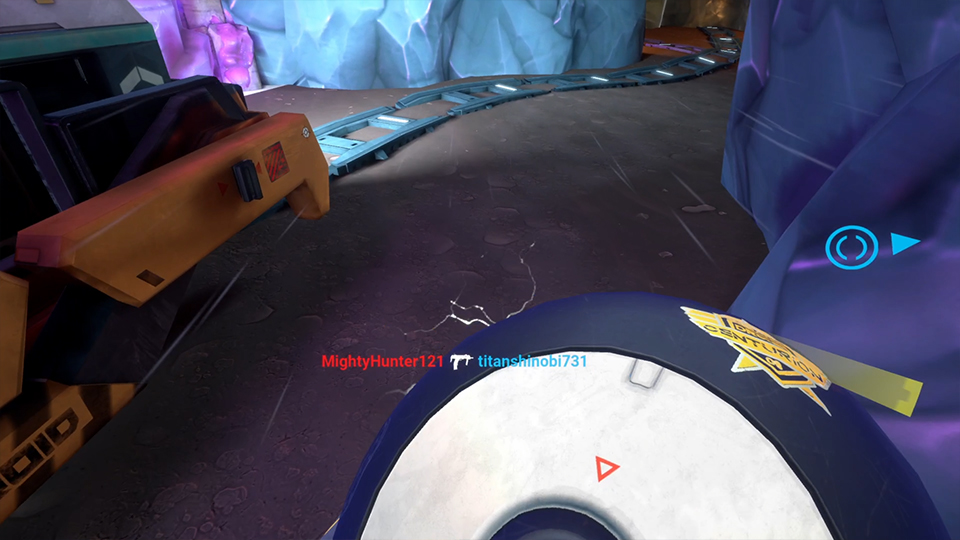 So, I can’t help but compare this to other recent multiplayer entries, especially Solaris & Hyperdash as this shares more with those than the military shooters and compared to those 2 games I think this reigns supreme.  I’m not saying this is without issue however as there are some problems that need fixing.  For starters, your off hand doesn’t help with aiming your weapons and while grabbing your larger weapons with that second hand provides more stability, all the aiming is handled by your dominant hand, though the devs have said this will be addressed in a future update.  Also, reloading is handled by a button press and subsequent animations outside of our control cannot be interrupted until completed. When running using the default your arms will move on their own accord and you can’t fire while the “immersive sprint” option allows you to lower your gun yourself to run meaning those looking to run & gun will be disappointed, though I honestly didn’t think this was that bad and future updates are also expected to address these issues.  You can play this solo should servers be empty and still accrue experience and loot from those matches, but the AI is…lacking and when I played alone, I typically dominated thanks to the poor competition.  The 4 maps also get a little stale after awhile and despite how big they may be, after seeing the same maps again and again I longed for a little more variety.   Those problems aside, Larcenauts delivers a solid multiplayer package and if you can find a full-sized match, offers some frenetic gameplay that is heavily reliant on teamwork.  Each character has their own role and coordinating strengths and weakness is a guaranteed recipe for victory.  Combine that addicting gameplay with how you can improve each specialist and it makes for a very engaging game as I constantly felt like I was unlocking something or approaching a new goal. 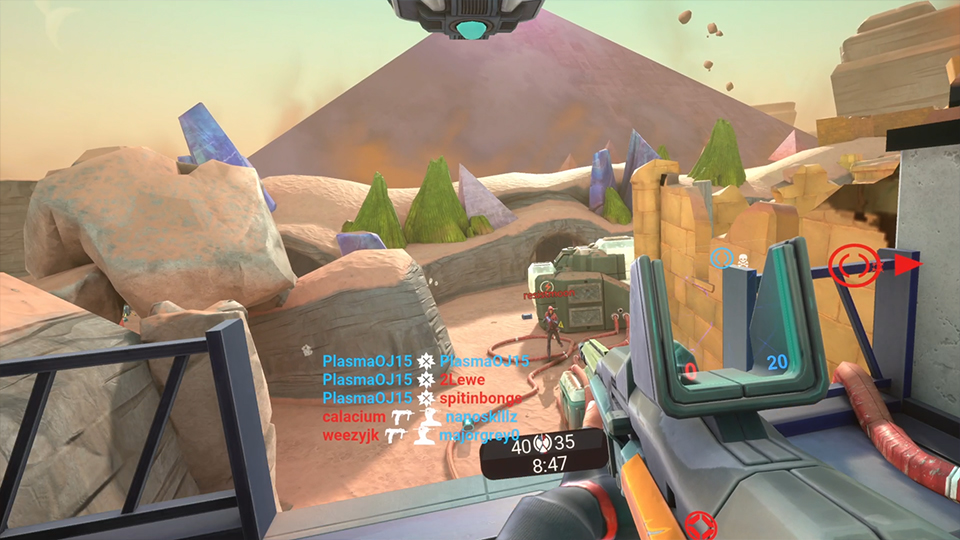 There is some great verticality in here

I was honestly a little worried about Larcenauts as I was unsure if the game would deliver anything more than we have already seen from similar titles and while it does echo past team-based shooters in many ways, it feels like its own beast, especially when you factor in the upgrade and unlock system.  The 6 v 6 action felt great with each game mode mixing up the gameplay thanks to the randomization in choosing the next stage and mode.  If you have been disappointed by the lacking depth in previous multiplayer efforts than Larcenauts may just be for you as it is a game packed with upgrades and options…it just needs a few more stages and  fixes to make this truly amazing!

What would I pay?  The launch price is $30 and while some may say that is pricey for what could easily be considered to be an early access title, I think the bones in here are strong and I ave faith that Impulse Gear will continually improve this game.  Because of that, I think the launch price is alright but I totally get waiting for a sale or seeing if the devs deliver on their post launch promises.

Impulse Gear provided The VR Grid with a press code for this title and, regardless of this review, we thank them for that!