For those that have played Skyworld, Kingdom Brawl will feel quite similar as it takes the battle elements from that title and strips away all the RTS components leaving us with a game all about action and combat as you face off against AI or human opponents. 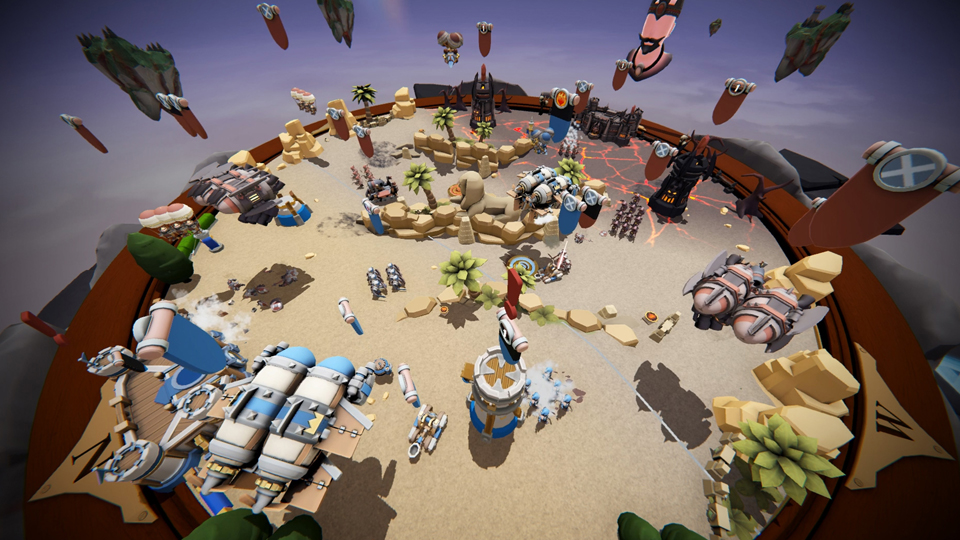 Like any card battler, which this ultimately is, you sit across from your opponent around a circular table which displays the randomly chosen battlefield.  Before a battle starts you select 8 troop types or spells you want to bring to battle with a host of them being locked until you have accrued enough gold to purchase them.  You can also select 3 boosts to be placed upon specific troop types that add specific buffs and boons making them a little risky but potentially rewarding.  For example, you can make a troop do extra damage but at the cost of half their health or increase speed sacrificing the amount of damage they can dole out.  Those extras potentially make your troops stronger but that is largely dependant upon the enemies chosen troops as each has there own strengths and weaknesses.  Certain troops may only be short or long range, slow or fast, cause small amounts of damage but have lots of health and vice versa.  Once you place a troop on the battle field they proceed along the path you chose when you spawned them, meaning once you place a unit, you can’t control anything after that except to spawn more troops and cast spells.  Spells allow you to personally affect a match by letting you choose said spell and attack the enemy troops by tossing a fireball onto the battlefield or a ball of ice to hold troops in place.  Yours and the enemy base have 2 surrounding towers which can defend against encroaching units with your main base being of the upmost importance to defend because if it’s destroyed, you lose.  To aid or hinder your efforts are 3 central points which will assist whichever teams troops cross over them last, creating small dirigibles that assault the opposing base.  What all of that boils down too is plenty of dynamics to change the flow of battle creating many opportunities  to keep things fair and change up the course of a battle should you have a proper strategy lined up. 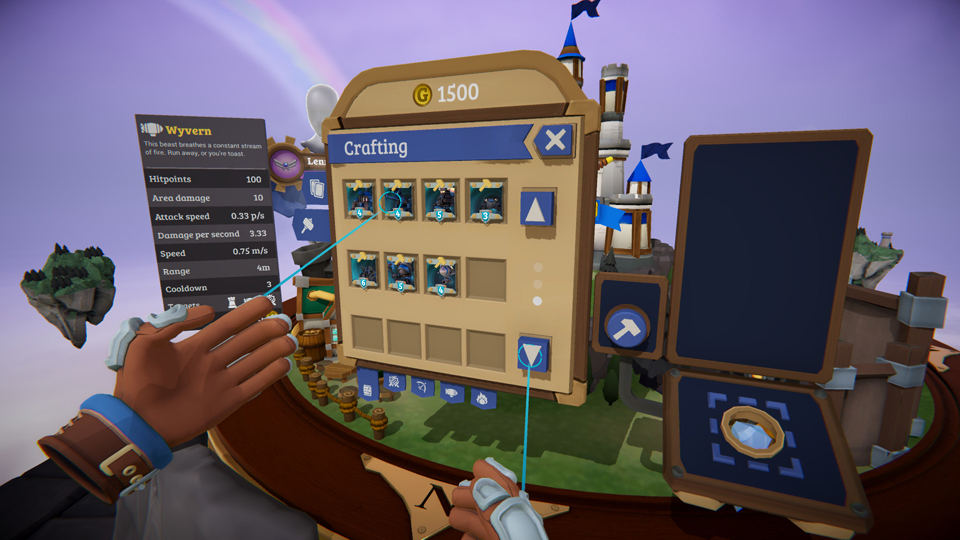 Visually, things in here a quite simple, with your troop models lacking much in the way of finer detail, but that’s not necessarily a bad thing as the bright color palette used along with the amount of forces that may be on the battlefield at any given time make for a rather pretty experience.  There are over 20 distinct arenas to play on and while they are all laid out in similar fashion, subtle changes to the environment create paths that differ from other maps ensuring that each one changes up the strategy slightly.  The fields of battle may be forested, or desert like with plenty of other settings adding a nice dynamic to the game.  You can also customize your avatar from a few predetermined options though those costs a currency you only receive through multiplayer play.  The maps definitely feel more like a diorama then a representation of a true battlefield but everything in here looks very clear and crisp in the headset making for a pleasing game to look at.  Music is on point with it fitting the fantasy theme wonderfully and all the sound effects at play fit the game perfectly ensuring a near seamless experience when it comes to presentation. 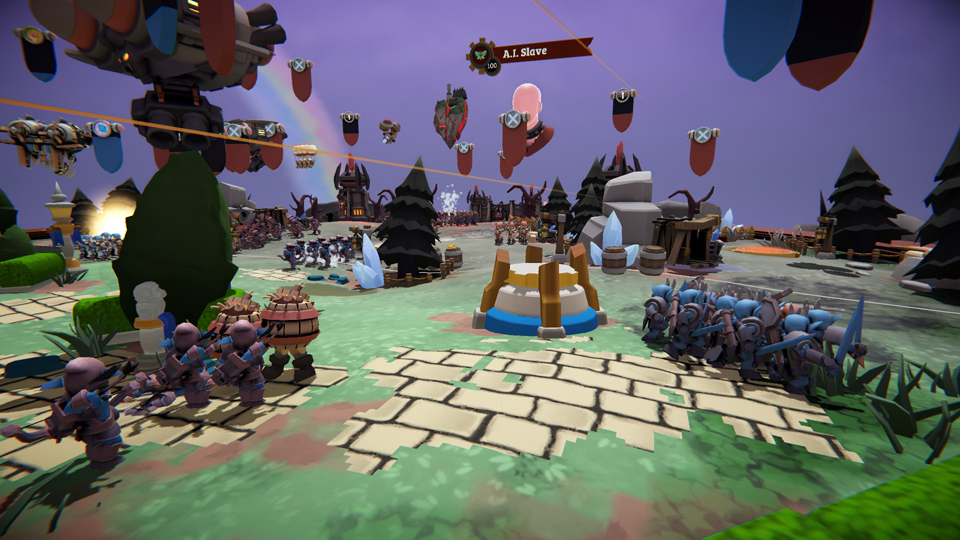 Human or AI, the game can be very challenging.

Kingdom Brawl is a solid 1 v 1 battler that is plagued by a few issues, some of which are more my own while others are staples of the genre.  To unlock more troops, you need to acquire gold from battles with much more rewards coming to you from multiplayer battles then from facing the computer.  This can be an issue as I often couldn’t find a match and was forced to play against the AI which by my math yielded about 1/4 of the loot compared to human competitors on medium and easy difficulties.  In any battle, losing yields much less rewards though still gets you loot ensuring that should you play for even just 1 round, you are a little closer to your next troop unlock.  Unlocks are also rather expensive requiring a lot of play to save up the funds, especially if you are relegated to playing against the computer.  It creates a grind that feels just a little to grindy to make playing this worthwhile as matches start to feel familiar.  Also, having played Skyworld, this just feels like a stripped-down version of that game removing elements that I very much appreciated.  So much so in fact, that I would rather play that game with its larger single player campaign then these short 3-minute battles.  That’s more my own issue but it does feel like a shell of that larger game, highlighting a fun aspect of that title but removing all the reasons I need to play this for extended periods.  I don’t mean to take away from the game as battles are fun and even more fun against human opponents but given that there is a larger, more complex game in this gaming universe, I just prefer to play that. 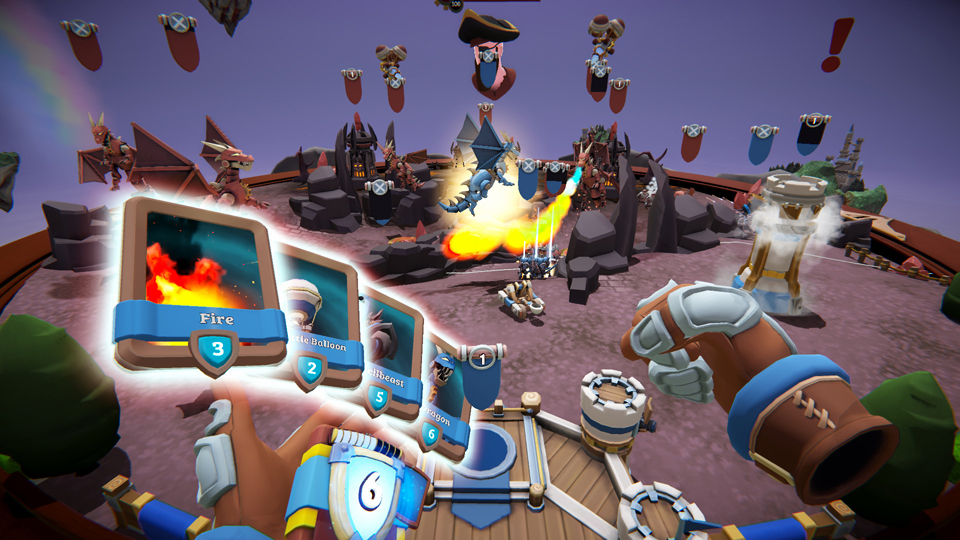 When it’s all said and done, Skyworld: Kingdom Brawl is a great multiplayer battler in the vein of many smaller mobile titles like Clash of Clans.   Every aspect of the game has a wonderful balance, but it is that smaller experience that may chase away many players.  If you are into facing off against human and AI opponents in quick battles involving strategy and a bit of luck, don’t mind a fair bit of grind and like to climb leaderboards then this is for you.

What would I pay?  At regular price this is $10 US and I thinks that’s a solid value assuming you are into this type of game.  If you are interested in a larger experience though, I’d recommend the parent title Skyworld as it is this game, and a whole lot more.

Vertigo Games provided The VR Grid  with a press code for this title and, regardless of this review, we thank them for that!