VR and the rhythm genre seem to be a match made in heaven and while not every game is a winner, the ones that do rise to the top make for some of the best VR experiences you can get across almost any headset.  With games like Beat Saber, Audio Shield & BoxVR all highlighting the strengths of the genre by mixing up just how we interact with music.  With Audica, you are armed with 2 pistols and must shoot the beats in time with the music and if that’s sounds simple, it is…and then it gets a whole lot more challenging. 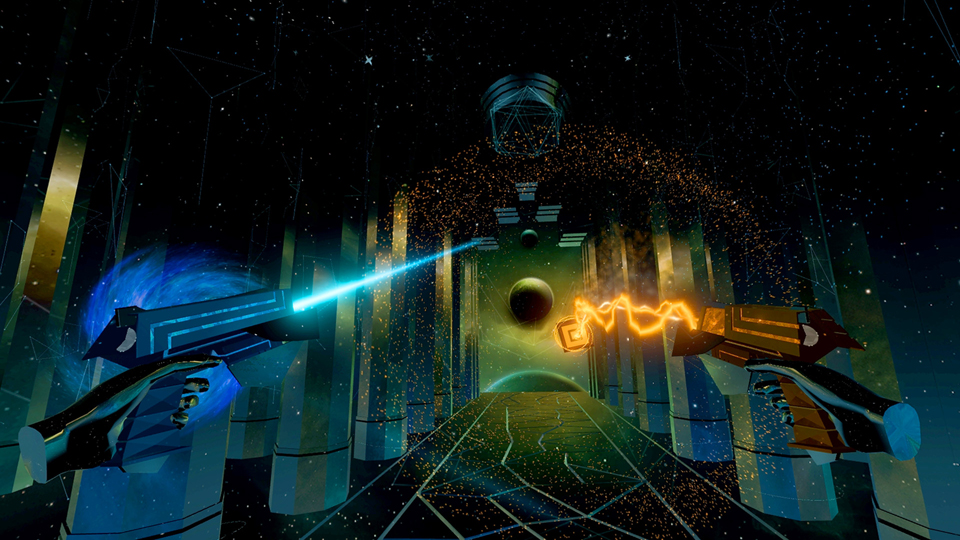 Let the music move you.

Obviously, with said pistols you will need 2 tracked controllers, or Moves for PSVR users, as you shoot at the incoming beats.  The game features a campaign carrying you through all 4 difficulties from medium to expert with each adding a new layer of depth to just how this game is played.  Initially, you just shoot the colored notes with the corresponding gun, either blue or green, but soon enough you’ll have to shoot and hold the trigger for certain notes, as indicated by diamond shapes, followed by shooting and holding your guns while aiming along a designated path.  Throw in some incoming beats that you need to physically swipe away and shots that must hit with your guns sideways and you get a game with a lot more depth and challenge then what it initially appears to have.  Toss in additional campaign challenges like moving your arms a certain distance, a seemingly default VR rhythm game challenge that I loathe, as well as shooting targets without looking at them along with faster and faster speeds and you get a rhythm/shooter that starts off easy to play but becomes difficult to master, which as it turns out is also a genre staple.  There is around 30 tracks included with the base version of the game featuring some of today’s more popular electronic artists but should you want more, there is a host of DLC tracks that contain pop acts like Billie Eilish, Maroon 5, Imagine Dragons and many more that can be purchased individually, bought in packs or through season passes all with varying prices and when you count all the tracks available, Audica has one of the most impressive modern day libraries out of any rhythm game to date. 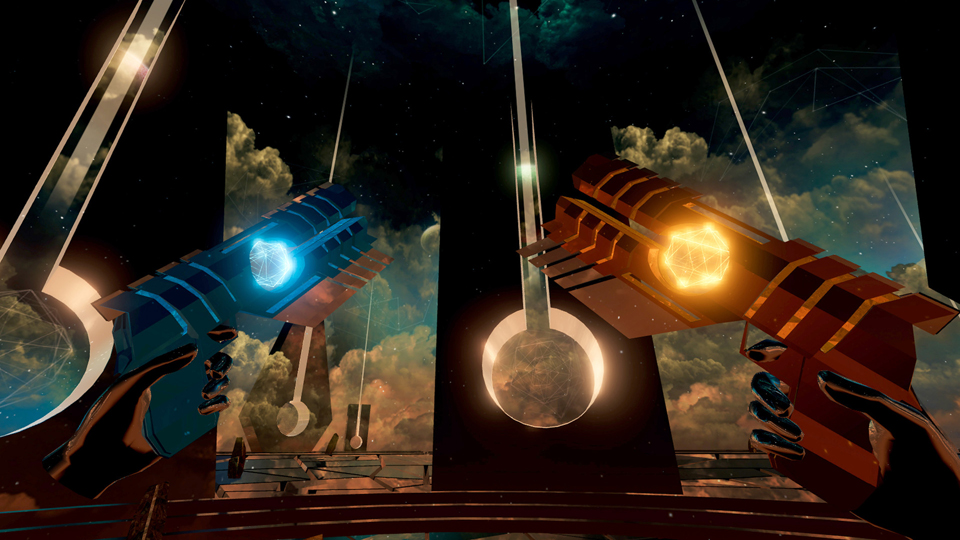 You can choose from a variety of guns and backgrounds.

Audica looks impressive with you being placed in relatively static environments that react to each track, thrumming to the beat and lighting up in proper fashion.  Each beat-type hit reacts in unique fashion whether it just an explosion of particles, held shapes that spin faster and faster while lightning from your guns hold them in place or swirls from other hits creating tiny black holes that disappear almost instantly.  It’s hard to describe the orgy of lights and effects that are before your eyes but trust me when I say it’s beautiful and striking and almost addicting as missing just a single note dulls all the pretty and even makes the song sound hollow until you hit the next few notes and get back in the groove.  Every individual queue has its own shape and identifier ensuring that when you miss, it’s entirely upon your lack of skills.  As you proceed though the campaign, new backgrounds are unlocked and can be chosen from at anytime when you decide to play individual tracks outside of the story, which is little more then some text bubbles that appear as you unlock those new settings.

The songs are the star of the show and while almost all the songs in here are electronic pop, that genre fits really well with the gameplay.  Much of, if not all, of the songs are licensed from popular artists and even if I’m not overly familiar with all the artists in the game, they sound very modern and the DLC packs fall right in line with the base tracks giving this game more relevance then other rhythm titles that use lesser known artists. 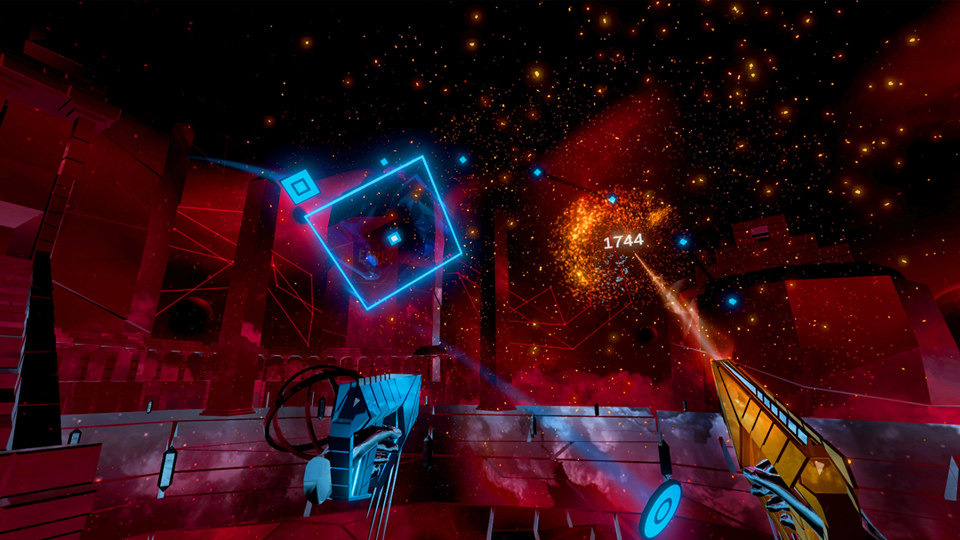 Be on your toes for the variety of beats.

The formula here is simple and for those just starting the game on the easy difficulty, Audica will be fun, but underwhelming as all the game mechanics aren’t present making the game feel rather shallow.  Standard difficulty quickens the pace and demands more from you but the game doesn’t really shine until you get to the harder difficulties and the game pushes you to your limits with beats coming at you from all sides and at a pace that can seem impossible at times.  That is ultimately this game’s largest issue as you really can’t practice against all the beat types unless you are on the harder difficulties but that leap in challenge will result in failure until you memorize each song’s different patterns.  Trial and error will get you through that leap in difficulty, but it would have been nice to get used to ALL the different beat types on the easier modes.  My only other issue really would be some of the challenges in the campaign which I touched on earlier as they tend to remove much of the fun in place of silly challenges.  Neither of those issues is too big and practice will get you past them, but you might be forced to play through songs a few more times then you want to unlock those next campaign songs. 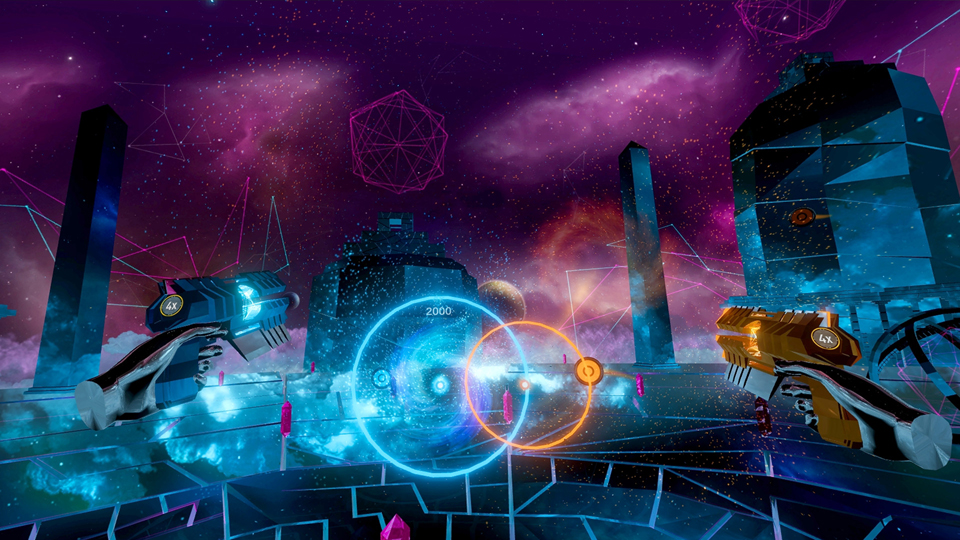 Lots of pretty stuff flashes before your eyes.

Despite those few issues, Audica is still as addicting as these types of games come and as your skills improve, you can’t help but feel like a badass as you shoot all the targets flying your way.  The already impressive, and ever expanding, track list ensure there is plenty of relevant music to play and while the hurdle to conquer those harder difficulties is a large one, once you get your skills honed, Audica offers up an intense, fun and challenging rhythm/shooter.  Fans of the VR rhythm genre have plenty to get through here and I don’t doubt this will suck up hours of your time as you chew through all the content available.

What would I pay? $30 for the base game is a pretty solid detail as it comes with a ton of tracks to get through.  Even the DLC prices aren’t too crazy and while the overall price for all the current tracks available might increase the price a fair bit, with the average price being less then $2 a song, you’ll get a fair bit of bang for your buck.

Harmonix Music Systems provided The VR Grid with a press code for this title and, regardless of this review, we thank them for that!