I’ve honestly been avoiding stationary wave shooters as we have seen a lot of them release since 2016 with many of them feeling like nothing more than reskinned versions of the same game, only instead of fighting dinosaurs, it could be zombies, soldiers, cyborgs or whatever!   That’s not to say there aren’t gems within the genre with games like Blasters of the Universe & Space Pirate Trainer reigning supreme when it comes to these game types.  Mothergunship: Forge is the follow-up title to Mothergunship which was a fast-paced, FPS full of custom weapon options and an army or robots that try to run you down in Serious Sam style and I can’t help but feel like I wished I played that game instead of this one. 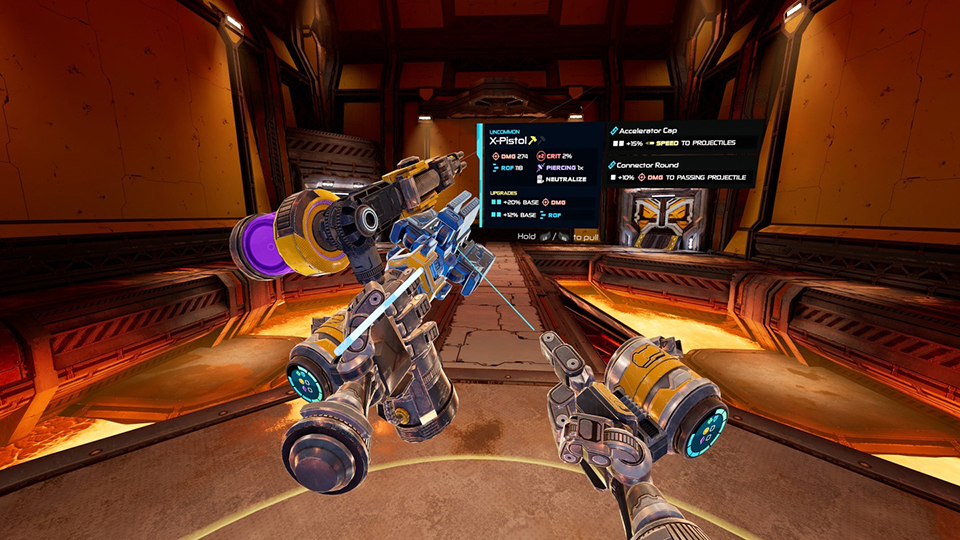 The deeper you go, the more crazy gun options you find!

As you won’t be moving save for within your play area, the only thing you really need to focus on is your weapons and making sure you take out the enemy drones and turrets that stand before you.  This is a rogue-lite shooter so every time you play, the game will be different with pick-ups, enemies and the rooms you visit all randomizing during each play. After a brief tutorial that explains how to punch, shoot, customize and upgrade your weapons, you’ll have to enter the gunship and try to get to the boss at the end.  At each games onset you’ll choose one weapon and one mount and you’re off.  You’ll spawn in a room, take out the baddies and choose your reward.  Each room is marked with a symbol indicating that rooms reward so you can choose from a few options to make that run a little easier, or maybe unlock more items for future runs.  Money can be spent only during that run when you reach a store, which will contain a random selection of 6 items from health, shields, upgrades, expansion slots and many more surprises while gems collected unlock more weapon options for your following attempts.  Forge upgrades let you increase any particular piece of your gun making them more effective with the gun customization being THE reason to play this game.  As you find more gun parts, you’ll also need more expansion slots that let you continuously add more weapons, ammo types and modifiers to that arm.  As an example, I started off with a simple laser type gun, added a buzz saw too it, picked up an expansion slot that let me add some special ammo and a rail gun making that one gun ready for just about any situation.  After that, it’s all about getting to the final boss and should you find yourself struggling, an easy mode is available as well multiple harder difficulties and online co-op which lets you and friend tackle the game in tandem. 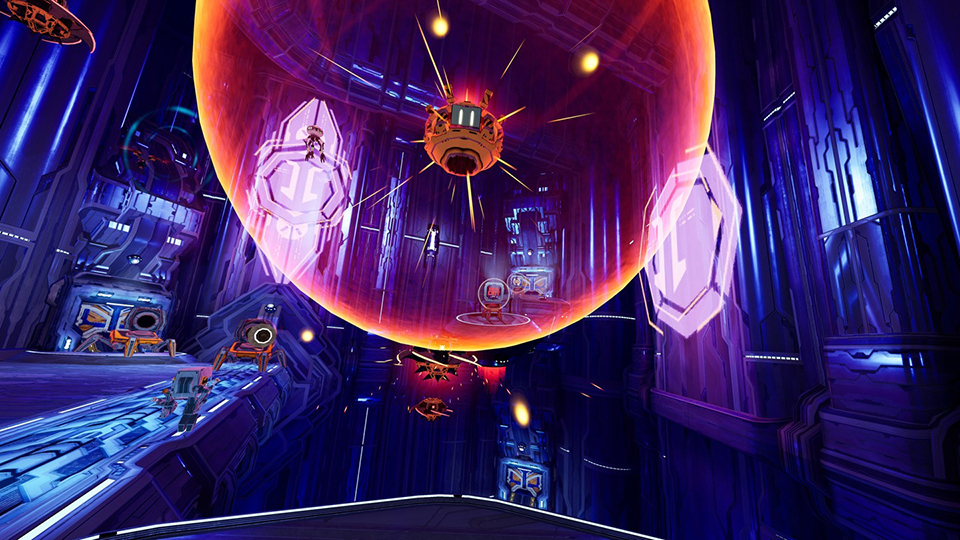 Never let these drones get too close!

MGF looks perfectly fine with each room varying in size across 3 different themes.  Many of the rooms have moving parts, machines and other elements adding a nice dynamic with some being relatively small while others are much larger in scale, allowing the drones to come at you from all sides.  It can get crazy hectic as ‘mouser’ type drones run at you, turrets launch rockets from a distance while other flying drones also fire shots your way and others ram with buzz saws or explosives.  It’s in those bullet hell like moments where the game truly shines as I was forced to duck and weave all manor of incoming fire while doing my best to avoid the enemies targeting me.  As I built up my weapons, they began to look more and more insane with multiple guns, ammo modifiers as well shields and other weapon types that can lead to some very bulky, awkward builds, but that never really bothered me as customizing all those options to maximize their effectiveness is probably the best aspect of the game.  As you make your way through a stage, you’ll eventually run into a boss battle with all of them being substantially large and deadly.  The gunfire and projectiles come in many forms with temporary power ups appearing randomly and in combination with the variety of the enemies of you face, there’s a fair bit to like in the visual department.  Audio wise there isn’t too much to talk about with some light voice work happening in between each stage and some generic, upbeat sci-fi action type music accompanying all the combat.  Weapons all sound as they should as do the enemies you face and while nothing really blew me away here, it all worked as it should, and I have no complaints. 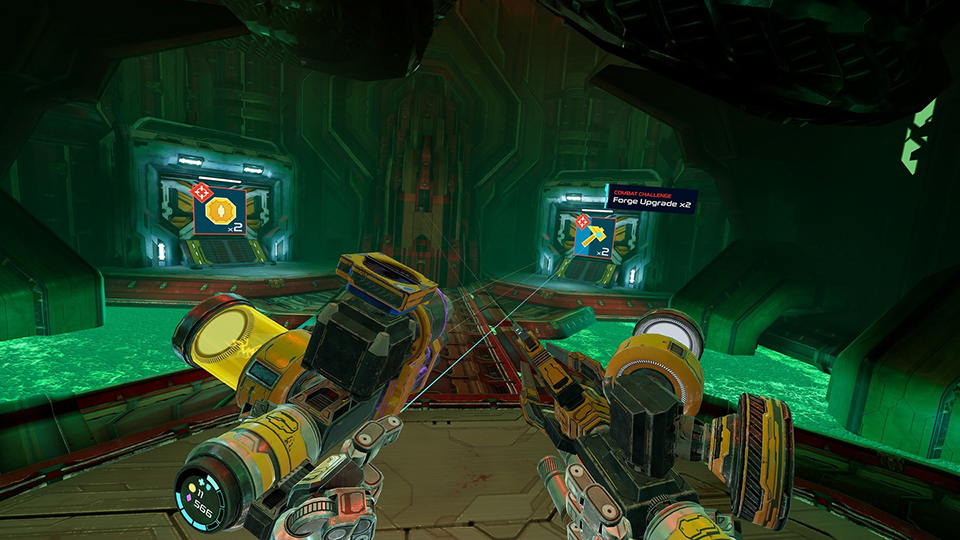 Every run offers you temporary and permanent upgrades.

As far as wave shooters go, MGF is a competent one that excels in a few areas to make it stand out from the rest.  With that said, the core game loop here is playing the game again and again to unlock the stronger, crazier weapons and that just won’t be for everyone…it’s definitely not for me.  As this is a rogue-lite some runs will just be better than others thanks to the starting loadout and subsequent unlocks which can feel a tad unfair though it’s just as easy to quit and restart should you not be happy with the early game offerings.  All your progress is tracked and available to check out in the main menu including just how successful your last runs were, your total gem count, unlocked weapons, missions, and achievements so there is plenty of game to take in here, it’s just a matter of how you feel about the wave shooter genre. 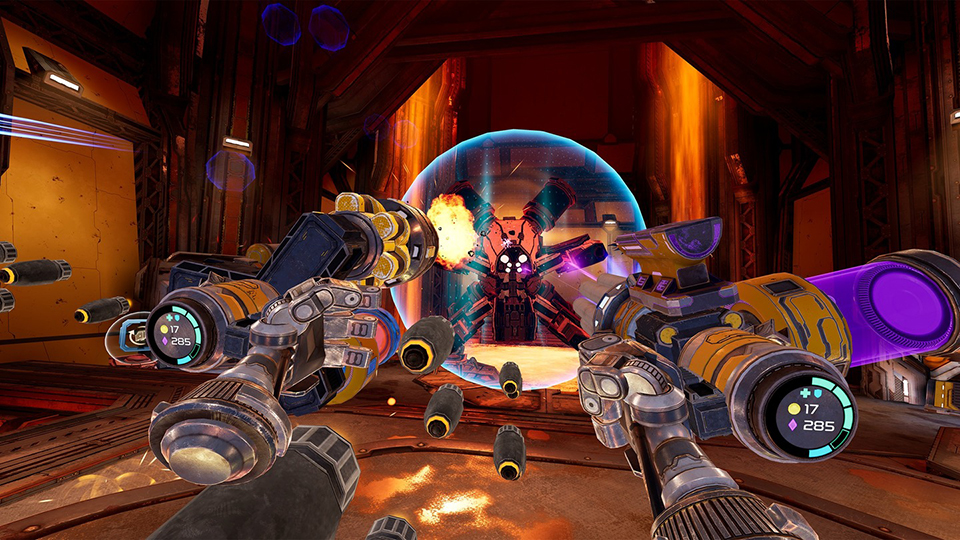 The bosses DO NOT mess around!

MGF is an exciting wave shooter but like most wave shooters, it wears out it’s welcome sooner than later.  The multiple difficulties, co-op and customization options do make it feel fresher longer, but even with all those options at my disposal, I was still bored after a handful of runs with very little desire to return, though admittedly, I am still fatigued when it comes to this game type so my apathy lies more with my over playing the genre then the game itself.  If you do like wave shooters and rogue-lites, this is a no brainer and I bet you’ll have a great time with this.  If you need a little more substance from your shooter than you should probably skip this as it ultimately feels like more of the same when it comes to the stationary shooter genre.

What would I pay?  $20 isn’t a crazy ask for this, but that’s assuming you have an interest in wave shooters.  If you don’t, then stay away or wait for a big sale as I think many of us are still tired of this genre.

Terrible Posture Games provided The VR Grid with a press code for this title and, regardless of this review, we thank them for that!