Physical games and VR would seem to go hand in hand and we have had titles that promote movement and physical activity with games like Creed, Beat Saber, SUPERHOT VR, Knockout League and few others.  Out of nowhere (for myself anyways) come BoxVR, a title based around boxing movements that focuses more on working out then gameplay, but rest assured, there is still plenty of game here to play. 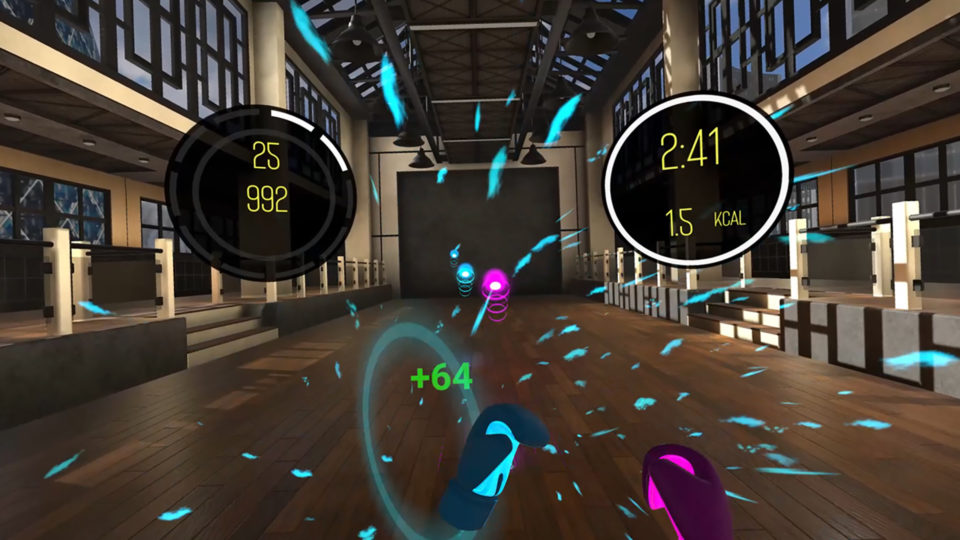 It’s tougher then it looks!

You need 2 motion controllers, as it’s a workout sim that tracks your movements.  A quick tutorial explains the motions you will be required to perform which are jabs, uppercuts, crosses, blocking and dodging.  What are you punching exactly?  Orbs identifying which punch will be required to score points.  How do these orbs appear?  They come at you from a distance, making their way toward you with more appearing behind them with occasional obstacles to dodge as well.  Sound familiar?  BoxVR is very similar to Beat Saber, but instead of swords, you use your fists and before you go shouting ‘it’s a Beat Saber knockoff!’, BoxVR has been available on the PC side of things since mid 2017, well before the release of VR’s most popular rhythm game.  BoxVR is broken down into workout regimes so you can freely pick any one and go, ranging from 2 minutes to an hour or so with options to make your own workouts out of the songs available.  Each time you connect with a punch rewards you with points and combo modifiers with well timed punches scoring even more points.  You can set daily goals as far as how long you would like to play for and every song keeps track of calories burned and your overall progress giving a great sense of reward.

Multiplayer is also available though isn’t much more then 2 people playing at the same time to see who can get the better score.  That’s actually awesome in theory but in practice you don’t get to see the other person, just a score board comparing both scores in real-time.  Even in-game chat isn’t available forcing you to a party up with those you may want to work out in tandem with leaving the multiplayer component feeling almost no different then the single player content.

BoxVR is fairly simplistic as far as visuals go with the main menu placing you in a gym and the songs/routines being in any one of 3 stages you choose.  The 3 stages are a gym, large hall and a futuristic landscape with a Tron like vibe.  They all do the job and being able to choose which ever one you want is nice, but these stages are nothing more than static settings to play the game in and don’t really accentuate the gameplay in any way, just a different locale to punch notes in.  The shapes come at you anywhere from tummy to head height and are easily identified as left and right hands as well as what kind of punch is needed making the game very easy to just jump into, at least on the easier songs. 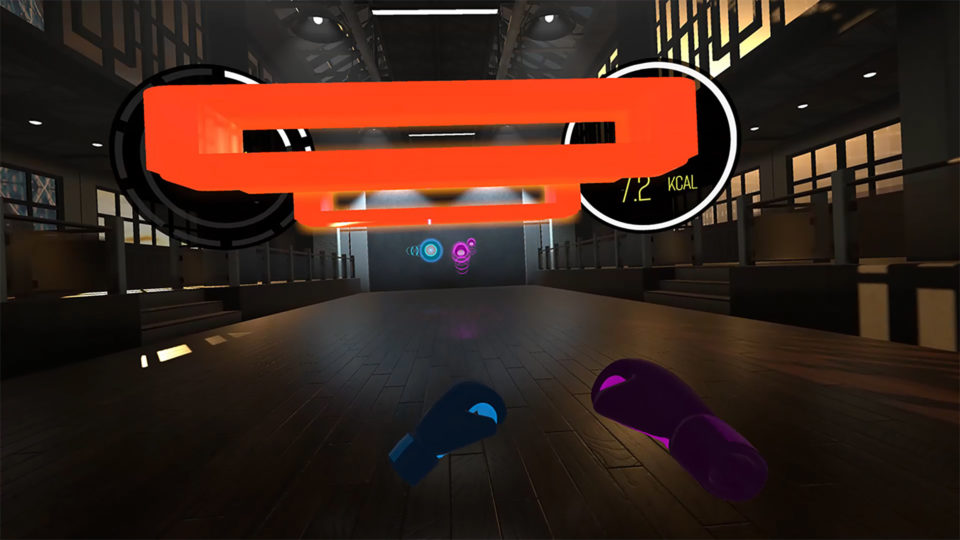 One of the biggest factors in any rhythm game is the song selection as having too few songs makes things feel repetitive or focusing on a single genre could alienate those who like something a little different.  BOXVR has what I believe is the largest library of tracks with 110 songs from a few genres; pop, rock, hip-hop and electronic and while I didn’t recognize any of the songs I played too, no matter which genre, none annoyed me.  The punches are mapped to the songs nicely allowing you to fall into a rhythm during some the repeating portions of a song.  Every icon hit delivers a nice little ‘thwack’ which matches the music perfectly with an audible beep when you reach the next combo tier increasing your score or when you miss.

BOXVR, as I said, is much more focused on working out then being a full-fledged game and is missing some key features for a rhythm game, specifically online leaderboards.  It feels almost criminal to not have those leaderboards in here just see where I stand when compared to everyone else.  The physical nature of this games adds a lot to that competitive factor, and I would have loved to have them in here, if not just have another motivator to play longer and get better.  My second issue would be that each song has predetermined notes, so it always plays the same when you pick it.   As some of these songs are more challenging, it would have been nice to see different difficulty levels with less or more notes to hit but given the huge amount of songs, this is by no means a game breaker.  There is no option for custom songs but seeing as how each song was designed by a ‘fitness expert’ it makes sense and like I said, with over 100 songs to choose from, I can’t be too offended by this.  Those issues I mentioned are minor at best and BoxVR provides a workout experience that is really fun.  Throwing punches is exhausting (in a good way) and I put this game on the same level as Beat Saber only with more focus on being physical. 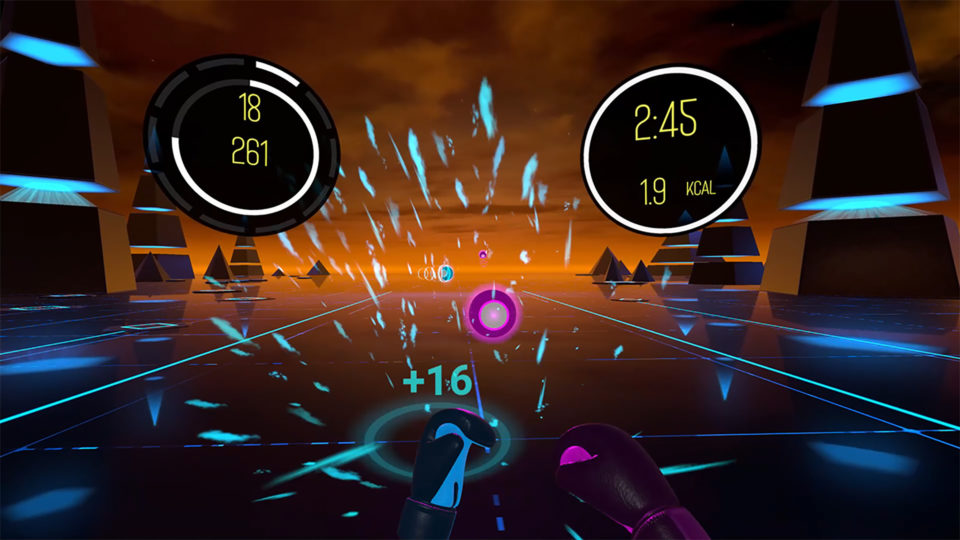 It’s time to burn some calories!!!

I was very pleasantly surprised by BoxVR as it has given me another reason to get in the headset and that is to get fit.  If your one of those guys that doesn’t think you can work out properly in a headset, BoxVR proves you are wrong as I ache all over the place as I put this review together and I still plan on playing a ton more.  BoxVR is now on my regular workout schedule thanks in large part to the fun factor.  I have never liked running on a treadmill or lifting weights as those activities just bored me.  BoxVR is the exact opposite, pushing me to get better while I exert myself in a game that is fun to play, has tons of replayability and is one of the better VR rhythm games available

What would I pay? The $30 asking price for this is on point.  There is a ton of songs and routines to play through as well the ability to customize your own workouts.  That said, if you are more into the gaming side of things, $30 may seem a tad high, but if you are looking to get a little physical and enjoy rhythm games then I say pull the trigger on this, I doubt you’ll regret it.

FitXR provided The VR Grid with a press code for this title and, regardless of this review, we thank them for that!