If you don’t follow my PSVR exploits, I don’t blame you!  If you do though, you may be aware that I typically avoid any type of spoilers or anything that may give me too much information prior to a game being released.  With Bravo Team, I knew very little going in and I think my experience was better for that fact.  With that said, those expecting a fully immersive VR shooter may be disappointed as Bravo Team does a lot of things right, but gets just as much wrong as well. 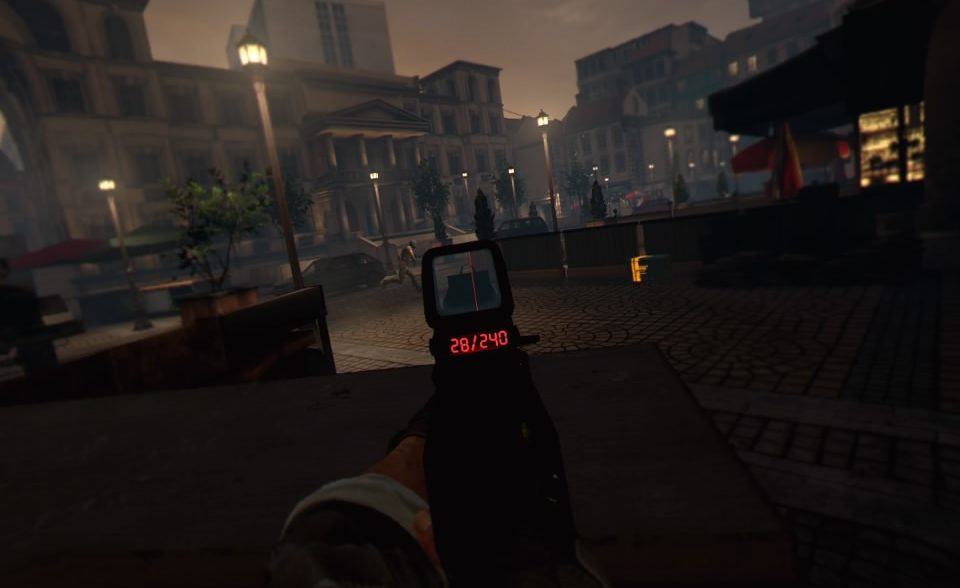 A shooter in VR shouldn’t feel this monotonous

For those unaware, Bravo Team is a tactical FPS that has you and a friend taking on hordes of enemies in some very Call of Duty-esque action sequences.  Supporting Move, DS4 and Aim controllers allows for maximum comfort and tailors the game to your preferred control method.  That said, as is typical of Aim supported games, the Aim controller is hands down the best way to play Bravo Team.  No matter which control method you use, the game plays the same.  Your weapons are tracked so you need to physically line up your targets and fire.  You can reload when necessary and when  behind cover, you are automatically in a duck position and need to press ‘L2’ to stand up and take aim.  Navigation is done by way-point style with level design always providing some form of cover just up ahead.  Looking at the area you want to move to and pressing ‘X’ will trigger a mini-cut scene of you traveling to that spot.  Some of these spot have much needed ammo crates which fill you to the max and can be returned to at any time or, depending on the stage, a stealth kill option may be available where moving to that spot triggers a mini-cut scene of you quietly taking out an enemy.  Additionally you can send your partner hand signals which in Multiplayer mode are next to useless unless you are playing with a hardcore friend, but when playing with the AI, sends basic instructions his way and lets you control the pace of the action a little better.  Should you feel overwhelmed or accidentally move to far forward, a press of the ‘O’ button will retreat back to your previous hiding spot

Bravo Team looks good enough, though I wasn’t blown away by this one.  Models do carry a lot of detail and would fit in wonderfully in any other shooter and even the environments, though relatively contained, look good enough, though the brown and grey color palette did having me longing for some more colorful scenery.  The base story involves a botched escort mission in a fictional Eastern European country and you and your partner have been left stranded with an army between you and safety.  The city-scapes look good and feel authentic enough, though are only populated with enemy soldiers, and as you traverse through the game you’ll see a variety of set pieces that do a decent job of putting you in this fictional city.  It definitely feels like a stock military FPS, but that’s not a bad thing as we PSVR users have been clamoring for a game of this type since launch. 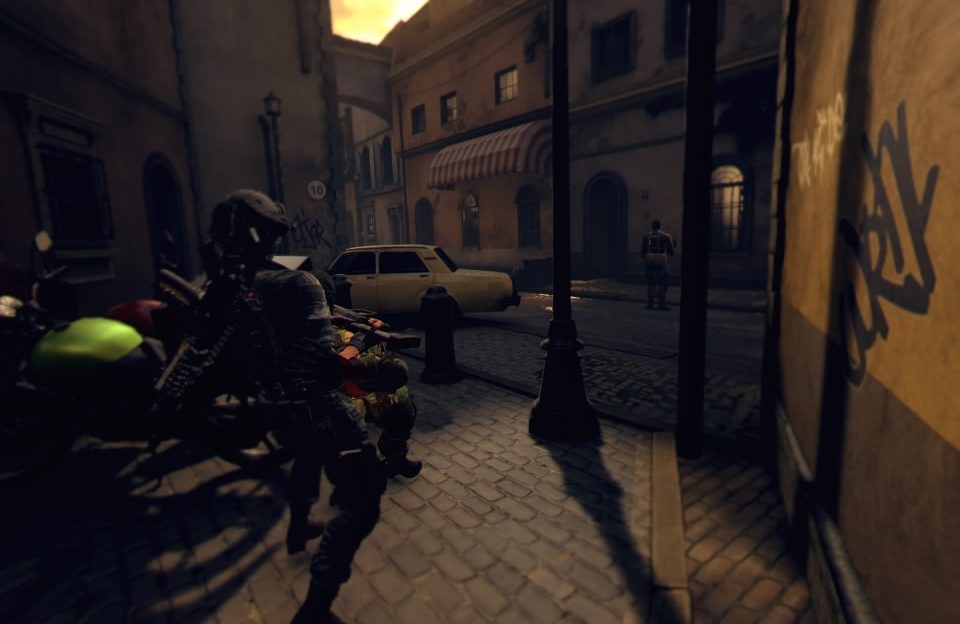 Stealth Kills have never been easier to perform

I did appreciate the audio here with competent voice actors hammering home just how dire your situation.  When playing with the AI ally he will yell at that ‘we can’t stay here’ or ‘we gotta move forward’ that seemed to come at perfect times as I may have been staying to long in one spot.  The entirety of Bravo Team is very cinematic and thanks to the alright visuals and solid audio, most of the flaws in the visual department don’t detract from the game.   It’s  worth mentioning that the campaign contains no music, adding to realism of the situation when the bullets stop firing and you are left to gather your wits.

Sadly, the gameplay does not meet the same level as the audio and visuals.  The shooting is great and feels absolutely wonderful with the aim controller and that little extra rumble as you pull the trigger makes the fire fights sweet, minus one issue I’ll mention below. It’s the level navigation and design that’s the issue.  Every time you move from cover spot to cover spot, the game goes from 1st person to a 3rd person cut scene as you watch yourself move to the next location.  The mechanic works, but I think making the 3rd person view optional would have gone a long ways to keeping me immersed in the action.  Every time you move it takes a second to get your bearings and as you now have a different vantage point, an unseen enemy from the previously unseen position may now have you lined up without you even knowing they are there. If you decide to stay stationary, the game seems to continuously throw enemies at you until you advance which means the pace of the game is 100% reliant on you and could make many sections of the game last longer than they should.  The solution would seem to be rushing through the stages, but enemies, though dumb, can still overwhelm with numbers and bullet sponginess. 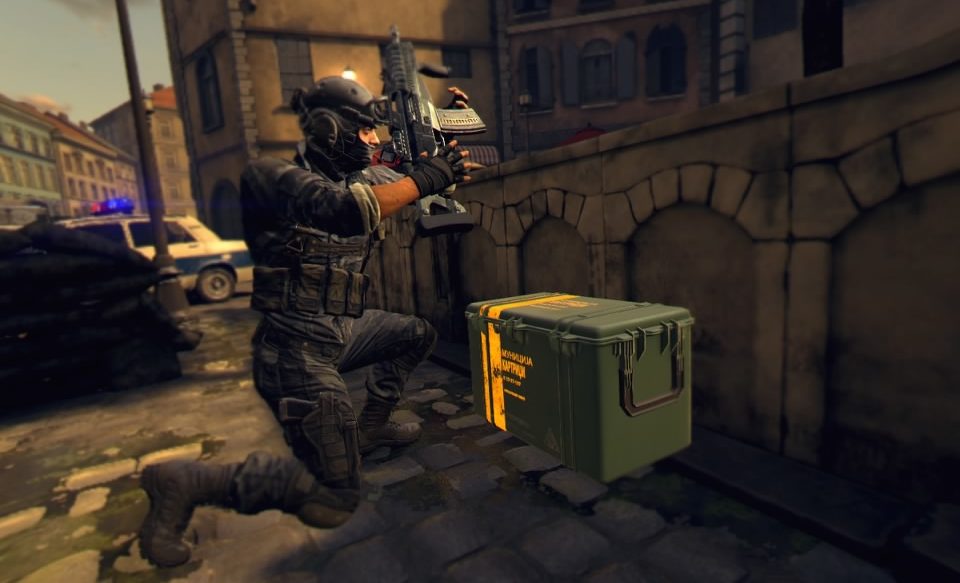 The amount of ammo crates scattered around the game is just irresponsible!

The action is up broken with some stealth missions which had me feeling like I was playing through a terrible section in Splinter Cell.  There is no skill behind stealth kills.  Enemies will just stand in vulnerable position and wait for their impending doom.  Once you navigate to the kill spot, the game takes over and you get to watch as you take out idiot after idiot without any sense of danger until you get to the next firefight. A sniper mission later on is fun and adds a cool little break from the machine gun wielding action, but suffers from tracking issues with Aim controller as holding it up to your face to aim, confuses the PS camera which has hard time distinguishing the glowing ball on the controller with the headset lights. That same issue occurs with any of the 3 sighted guns and I often found myself shooting from odd angles just to line the sites up.  Shooting from the hip and adjusting my line of fire seemed to be what I defaulted as aiming down the sites just felt awkward.  Bravo Team on occasion supplies you with a shotgun, which is great close up, but the missions where you get the shotgun have enemies picking you off from a great distance, even sniping you, giving no choice but to switch to the pistol for some accurate shots. 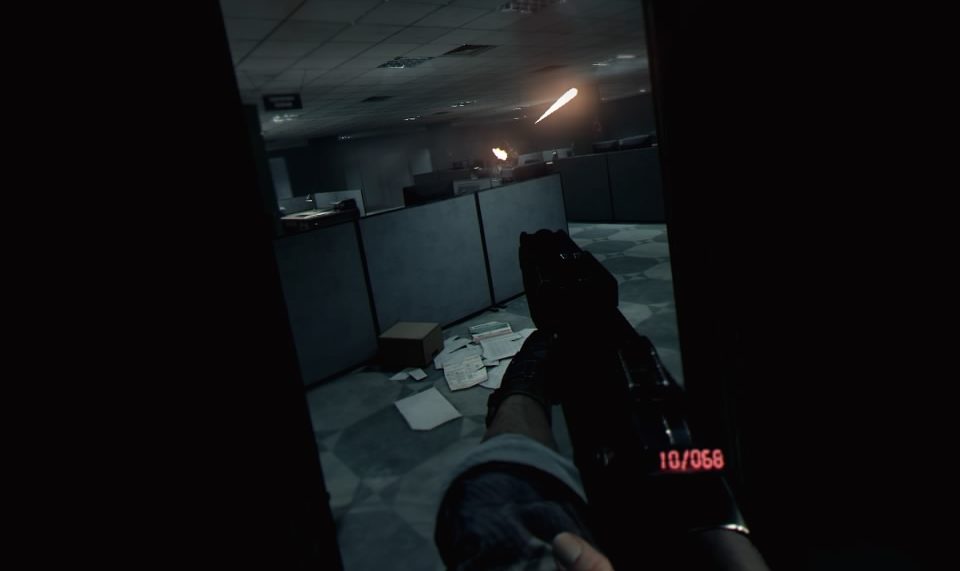 The shotgun leads to more frustration then fun

The online co-op fixes a few issues and does make the game more fun, but nothing really changes up other than that you have a friend to talk to.  Enemies mostly appear ahead of you and the only way they really surprised me was when I moved to the wrong cover point and was now flanked by baddies. At a few select points, enemies begin to come from all directions making deaths in these sequences feel really cheap given that even when moving from cover to cover, you take damage with no way of preventing it. There are a few paths you can take that separate you from you buddy, but these quickly come back together at the next big battle.  It’s better to have a friend than not, but doesn’t really change the way the game plays in any significant way, other than making it easier.

There are still a host of issues to bring up like visual glitches with your buddy just walking through walls and obstacles, Heck every time you 2 are side-by-side and move positions more often than not you will get a nice 3rd person view of one you running through the other.  I encountered the same glitch twice in my play that locked my partner in place, removing him from the mission until I died.  When you take too much damage, your screen goes grey and you need to wait for your pal to run over and throw a defibrillator on you, which is a hilarious cure for too many bullets to the chest.  You can do the same with your buddy and revive him, though that seems to be only needed on co-op mode.  Enemy AI, as I said, is dumb and may not shoot at you while you stand right in front of them or pour out of some imaginary spawn location and take up the same points of cover where you have killed countless enemies before. 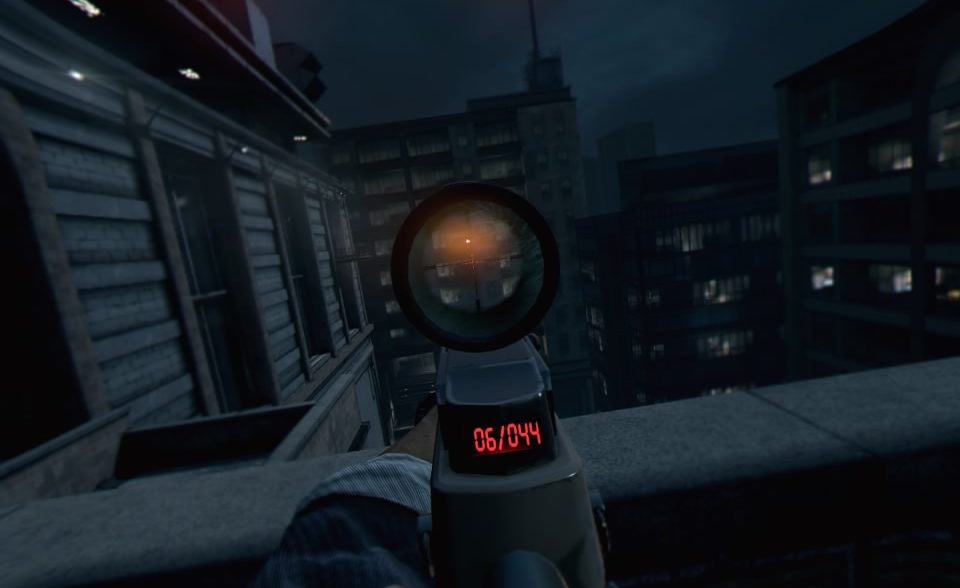 The sniping is sweet but hampered by PSVR’s limited tracking

I didn’t hate my time of Bravo Team, but the monotony of every single battle wore on me quick and I found myself often taking breaks just to cure the boredom.  Co-op alleviates some friendly AI issues and there is a score attack mode, which does nothing other than add a score counter and a timer to the game.  While some of the initial battles are intense, the longer you play Bravo Team, the more flaws you’ll see and they just keep chipping away at the game until it becomes just another wave shooter with not a lot depth.

What would I pay?  This isn’t broken, but when you consider the asking price of $40, the faults become unforgivable.  If this were half the price I could ignore some of the issues I mentioned but in its current state, $20 is as high as I would go with this, and only if you have an Aim controller.