For those unaware, Gauntlet is the 2nd title released in the Scraper universe with the first being a First-person shooter where you piloted a mini-mech as you made your way through a tower in an effort to stop the Humechs (evil robots) from using those facilities to kill a whole bunch of people.  This is not a sequel to that game, but another story set in the same universe where you again play as an elite HRF operative in search of blueprints for a new weapon you can use to fight the robot horde. 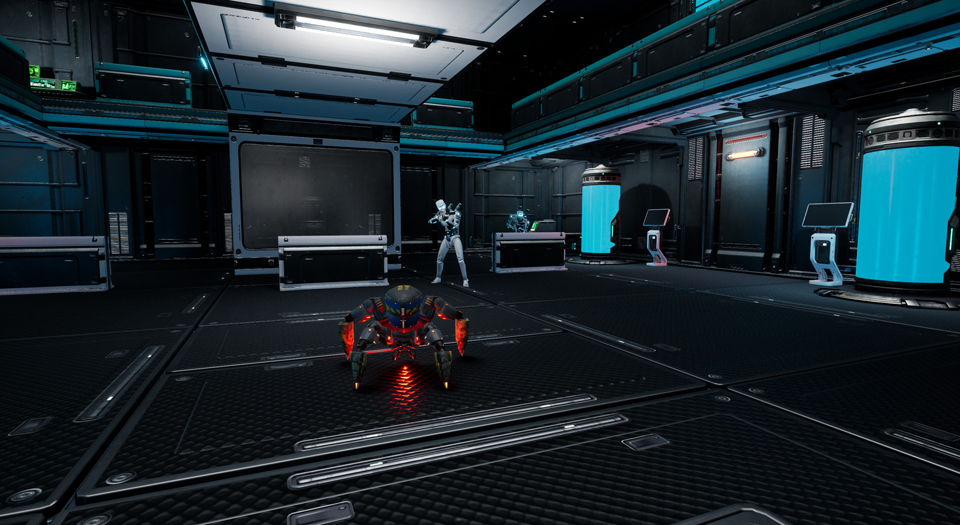 They’re coming right for us!!!

As this is a (mostly) stationary wave shooter, you of course have 2 hands to attack and defend against your enemies.  Each of your hands is equipped with very powerful gauntlets that can produce small shields or fire 1 of 3 weapon types; a standard gun, an energy launcher and a power shot that can be used to disable robot shields.  You can grab a knife from your chest and toss it at enemies with deadly accuracy, thanks to some aim-assist, that stuns the enemies for a few seconds with your last ability being a sort of ‘force-grab’ that lets you nab a robot, holding it in the air in front of you and any damage it takes while in the air replenishes your health.  This ability also allows you to grab projectiles and some items in the environment.  Between each mission you are placed back in a hub area where you can teleport round a room though most of your time will be spent at a central console where you can upgrade your stats and weapons and select the next mission.  As you progress through the campaign you may be rewarded with new weapon modifications or points you can assign to your abilities be it more health or shield recharge time and many other options.  The amount of customization is actually impressive though it’ll take at least a few hours of play before you start to unlock enough options to really make the game feel like your own.  The campaign gives you multiple level choices to pick from with each contributing towards your goal of getting to a boss fight via a meter that fills up.  At some point you’ll have to pick certain stages to progress any further with each stage setting you up in a series of randomly selected rooms facing off against bots with pre-determined modifiers though the game may or may not list those mods until you have chosen the next stage. 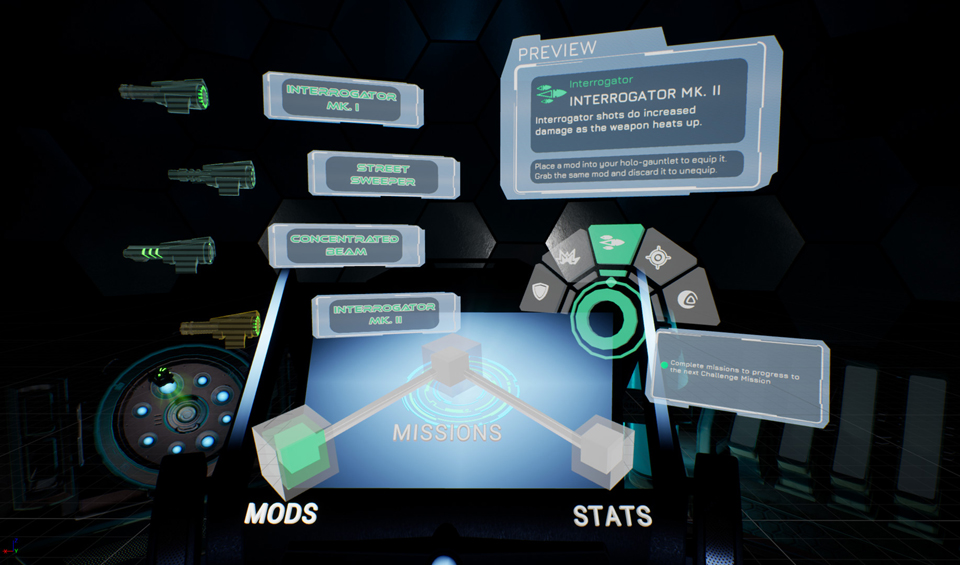 There are plenty of options to customize your loadouts.

Gauntlet looks quite striking in the headset with some very crisp visuals.  You’ll visit a series of random chosen rooms that all look quite different from each other be it hallways, stairwells and other rooms containing a wide array of cover for the enemy bots.   You’ll see the same rooms again and again as you play through each group of stages though the enemies found in said rooms will be different.  Battles are fun and get intense with enemy shots flying around you, which you can physically dodge, while snipers line you up in laser sights and larger bots fire rockets in your direction.  Lighting effects look solid be it explosions from grenades or just watching your shots fly nearby enemies and the environment with the presentation being some of the better I’ve seen when compared to similar titles.  Enemies move very fluidly and react relatively proper to impacts with your hand cannons looking quite impressive as they switch modes or change appearance with a new modification.  Bosses are typically impressive in scale and are much larger and thus come in much larger environments launching an arrray of attacks your way and overall, I was impressed by the look of the game.

Sound design is on point with a kick-ass upbeat 80’s sci-fi soundtrack that had me moving to the beat.  3D audio is here though with almost all the action happening in front of you it may not be easy to notice but pay attention and you’ll here enemies out of sight teleport into the level indicating which door they may be coming out of.  The robots themselves spout out one-liners about killing humanity and telling you to give up with each robot model making distinct noises that help indicate what may coming at you. 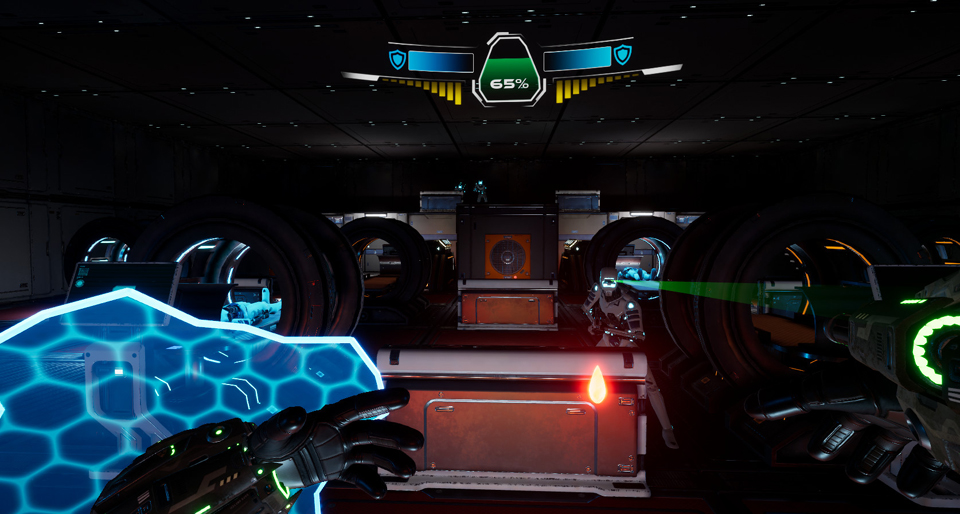 The stages change things up nicely, but you’ll see the same ones over and over again.

Scraper Gauntlet is a wave shooter like few others offering a lot of depth to customization and choices when it comes to what you want to face next.  In fact I’d go as far as to say there is too much content in here as Gauntlet overstays it’s welcome which is largely due to the genre this is.  We have seen so many wave-shooters that at this point, it’s a genre that has reached a saturation point like no other when it comes to VR.  The 8-hour campaign becomes a slog as you face the same enemies in the same rooms again and again and again.  You’ll consistently unlock new upgrade points, weapon modifications and upgrades and the amount of these is impressive but that alone can’t stave off the repetitive nature of the game.  Fighting slightly more challenging robots in a room you have seen 10 times before just gets old and I think the game would have benefited from a more streamlined campaign with other modes to extend gameplay.  When I was only 1/3 through the game, I was just exhausted by all of it and while everything works as it should, it all just starts to feel the same. 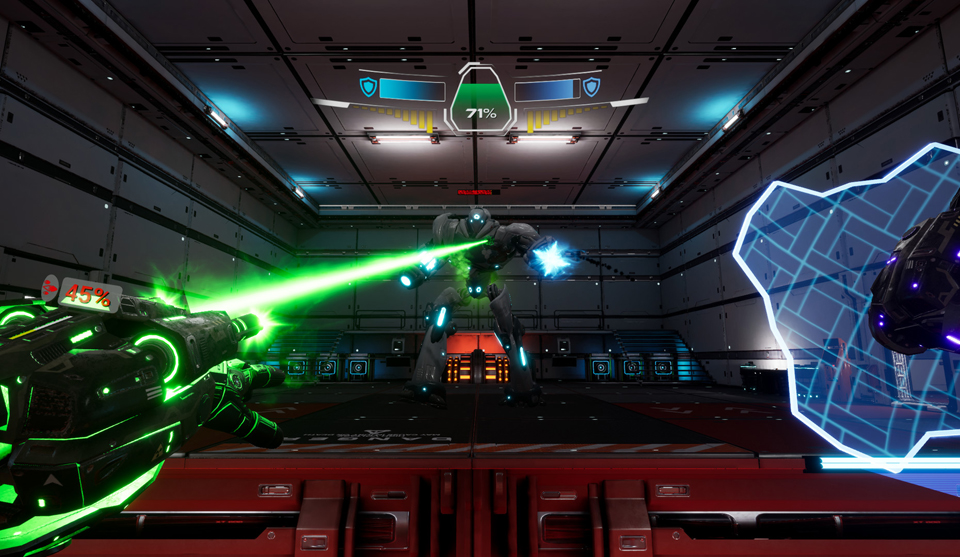 The bosses are much harder to take down.

Gauntlet is one of the more refined wave shooters I have played in recent memory and the developers really did their homework when it comes to how to make this one of the better titles in the genre.  It’s technically sound in almost every way that matters but it still feels like just another wave shooter, albeit a very polished one.  This made worse by the fact that the 1st Scraper title was a full locomotion campaign based shooter making it feel like a step backwards for the franchise and I would have much rather seen a true sequel or DLC for that 1st game as opposed to this dalliance in a genre that’s just so crowded it’s almost impossible to stand out.  That said, if aren’t sick of stationary wave shooters, Gauntlet delivers where it needs to, making it a title I’d recommend to fans of games like Blasters of the Universe or Space Pirate Trainer.

What would I pay? This is priced right at $15 and delivers a top-quality wave shooter with an extensive campaign.  It expands slightly upon the Scraper mythos and while I’m definitely over this genre currently, I can’t deny how much quality is in here and fans of the genre should be pleasantly surprised by this one.

Labrodex Inc. provided The VR Grid with a press code for this title and, regardless of this review, we thank them for that!