Simulation brawlers have become a welcome treat in VR thanks to that visceral feeling of smashing, stabbing or beating up foes right in front you.  Some of the most renowned VR titles fall into this genre and for good reason as they offer endless hours of fun that appeal to our more primal urges.  For every Gorn or Blade and Sorcery though, we get less then stellar entries into the genre like Rage Room or Drunk’n Bar and while those aren’t inherently awful games…well one them is, they highlight our desire to 1) beat people up and 2) that we have a very high bar when it comes to this genre and if you’re not in the elite, then you really aren’t worth talking about.  Enter Swordsman VR, a single player sword fighting game that has you facing off against AI opponents in simulated close combat in a variety of arenas and scenarios. 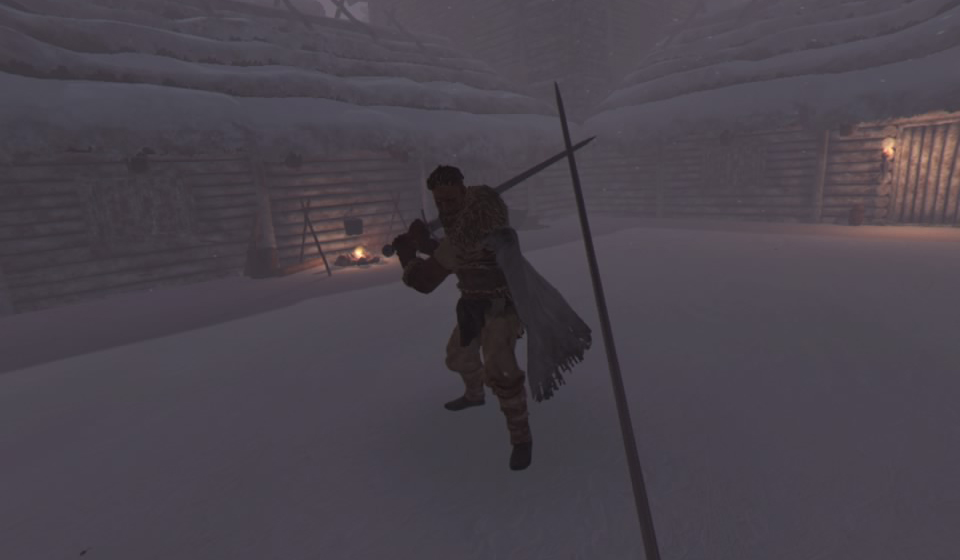 Square up and face your foe!

Swordsman VR is nothing short of simple when it comes to gameplay and controls.  You’ll of course need 2 Move controllers and can choose from 1 of 2 control schemes.  The first has you navigating the arenas using only button presses to move forward, backward, strafe and turn with the 2nd mapping your movement to 1 hand similar to Skyrim.  Neither one of these truly felt natural with the button only option making me feel more like I was driving a tank thank controlling a warrior with the 2nd method allowing for much smoother motion but at the cost of losing that hand to deflect blows with a shield or carry a second weapon while moving.  You can of course still hold items in that off hand, but as you’ll be steering your controller in the direction you want to move, it’s never in proper combat position until you square up and stay still.   Regardless, neither method is busted, and I really can’t blame anyone but Sony for this issue, but it’s there and it took me a bit to get used either method.  There are 2 options of play; story and arena mode with the former placing you in 4 different stages with 10 levels of difficulty in each one, culminating in boss battles and a final epic boss battle after you have beaten every stage.   The second allows you to customize many of the games options from the environment you fight in, difficulty of the opponents, how many waves and so on and just let’s you enjoy the carnage with both modes rewarding you with  you upgrade points and gold, unless you play on endless mode.  I think the story mode is where many of us will spend a bulk of our time and while their  isn’t much in the way of story, winning in each series of battles and upgrading my stuff provided plenty of motivation to keep myself  going back for more. 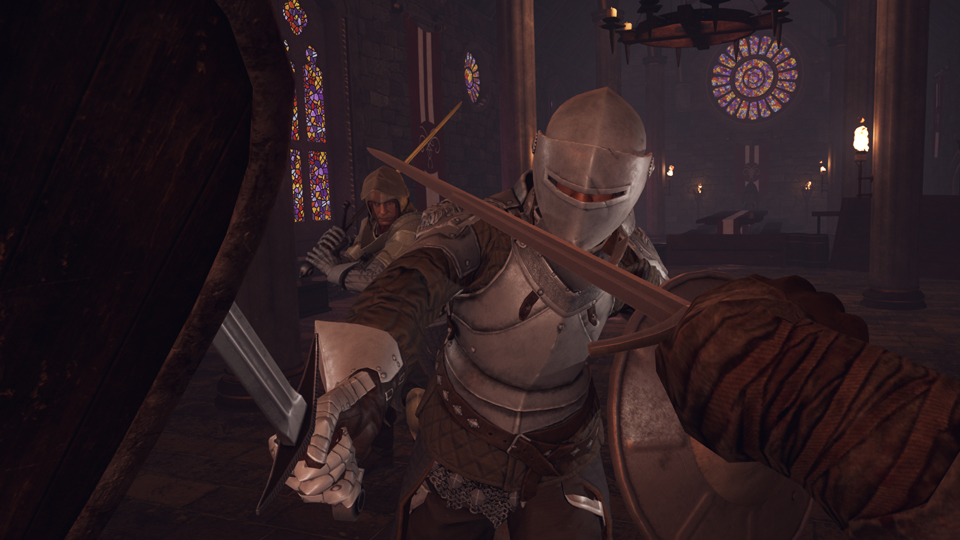 Be very careful when the enemy gets to close

During each stage you’ll face off against seemingly random series of enemies with varying stats, weapons and armor so trying a stage the 1st time may have you facing off against 1 well armored foe, but playing a second time may have you facing 2 or 3 less challenging opponents, but at the same time making them possibly even more deadly.  Weapons all impact with each other quite nicely, which is awesome as you’ll be blocking and parrying a lot to avoid taking damage and activating slow motion mode.  Enemies will follow and even try to surround you, so you need to be on constant guard when facing more than 1 foe and must pay attention to their attacks carefully.  Each warrior has a select move set so easier enemies will only use the same tactics again and again making it easy to predict and counter their attacks.  Harder enemies are more armored, have larger move sets and better stats including larger health bars and stronger attacks.  Head strikes are the key to an early victory as they seem to be the most effective attack, regardless of whether your opponents are wearing helmets or not. 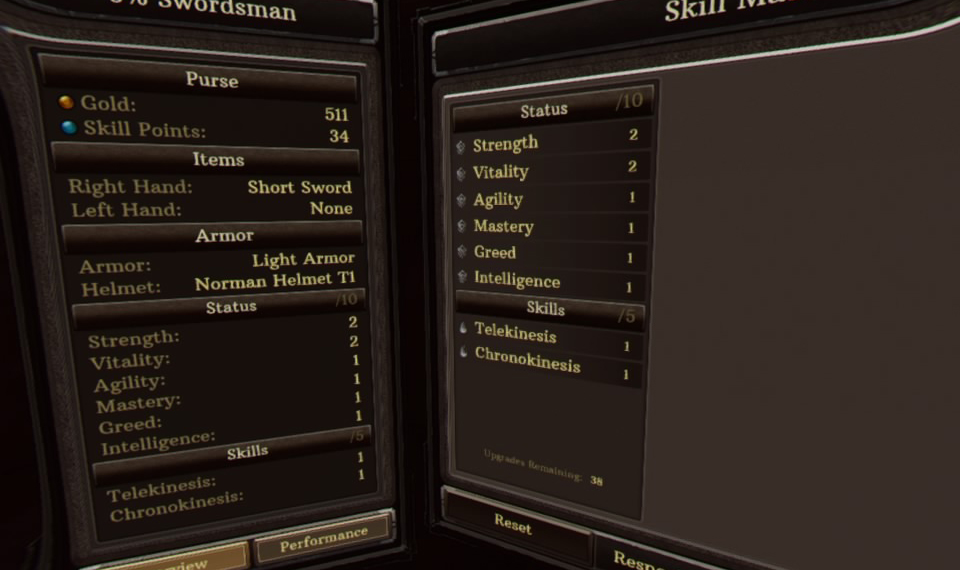 Their are plenty of weapons and upgrades to choose from

Swordsman is a decent looking game with some high presentation values in some regards, but on a really small scale.  Enemies move and animate quite nicely, save for when they get hung up on geometry or even caught up on themselves, with everything in here going for a more realistic look.   They don’t show much in the way of damage other then some blood spots and there is no way to hack off limbs though they do ragdoll quite nicely. Aliasing can be toggled in the options menu and I recommend turning it off as it does make the game much more crisp looking though that blurriness never fully goes away.  You’ll face soldiers from previous centuries, so you’ll face Knights in an old Church, Vikings in a small village, samurai in a dojo type area and Mongols on a sandy stone bridge.  Each stage is small and save for the church, which has some pillars, each level is effectively just a small empty arena.  Still, the environments look good and even the hub area, which is a small medieval building with a few NPC’s, has the look and feel of being ripped right from Shadow Legend with some nice attention to the details.

Sound is a mixed big with weapons sounding authentic and awesome when they collide with each other, but the enemies are largely silent save for the occasional grunt when they swing and when they kill you, whereupon the cheer in mocking fashion.   Music accompanies the action but seems to be very short looping tracks as they end quite suddenly after a minute or so before kicking in again and I ended up turning down the music audio as the short length of the tracks actually annoyed me a little and didn’t always fit the action, though it isn’t awful by any stretch. 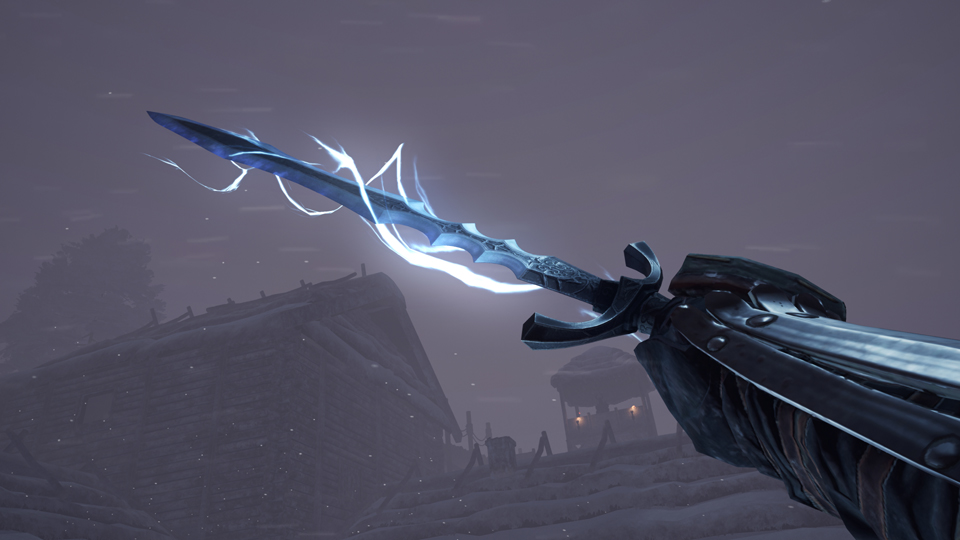 I think your enjoyment of this will depend largely upon your experience with other brawlers and your willingness to forgive the many issues in here.  When the combat works, it is satisfying, fun and you feel like a badass.  When it doesn’t, enemies will be clipping through themselves, or you, resulting on some cheap and frustrating deaths that force you to restart that stage from the beginning.  The enemies you face are supposed to get more challenging, but even with expanded move sets, encounters started to feel samey excluding the boss battles.   It’s also easy enough to exploit the game with head stabs insta-killing enemies regardless of their difficulty, excluding the very hard bosses, though that can be disabled in the option giving you a boost to loot and experience.   Their are a host of upgrades available and even the smallest ones do seem to help and while I didn’t necessarily notice myself getting better, it was obvious that I was hitting harder, taking an extra hit or 2, and just seem to be a little more successful until regular soldiers no longer worried me.  The 4 stages can be played at any time so if you get sick of of one setting or are just getting worked, you can face easier enemies in another stage and pick up some more loot and experience and upgrade your stats.  You can change a fair bit of options in here too like toggling standard comfort settings, health bars, invisible enemies, telekinesis and chronokenesis abilities, the former of which lets you grab weapons off the floor without kneeling and the latter slows down time upon a successful parry letting you unleash all hell for a few seconds, with a host more modifiers available as well.  Arena extends those options even further by letting you face any number of waves on any difficulty, giving you plenty of reason to keep playing. 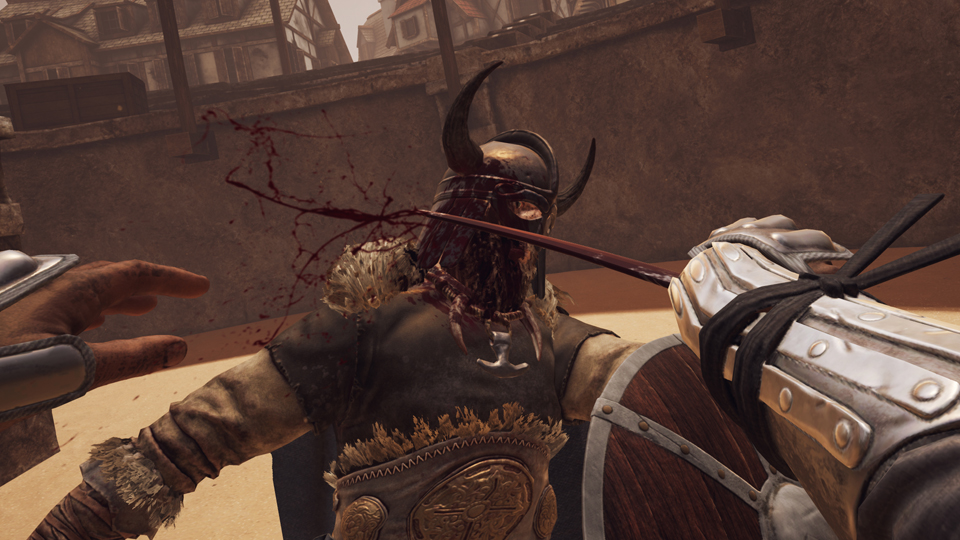 It’s not the bloodiest game, but the violence is satisfying!

I spent a lot of time playing this and had fun doing it.  By no means is it perfect and it does have issues that need to be remedied but even looking at the modifiers reveals the developers are also aware of some of these issues.  As it stands at launch, I’m pleasantly surprised by how well this works, especially given the developers previous titles.  I think those of us who enjoy games like Gorn or Drunk’n Bar Fight will have a lot of fun with this too.  It may not be perfect, or close too it, but it offers satisfying combat, an extensive upgrade system, challenging boss battles, an arena mode for endless play and the opportunity to feel like a sword wielding hero.

What would I pay?  This is $20 US and I think it’s worth it.  There is room for improvement for sure, but as it stands at launch, it’s a satisfying VR brawler and a bloody good time!

Sinn Studios provided The VR Grid with a press code for this title and, regardless of this review, we thank them for that!