FINALLY!!!! Finally, we have a boxing a game for the PlayStation VR.  I am still in utter disbelief that it took this long to put on some virtual gloves and enter the ring.  Knockout League isn’t quite the pugilist sim many have been looking for, but rather a cartoonish boxing game that is undeniably inspired by the Punchout! series of games.  I’m not going to mince words here people, if you have ever played Punchout! and liked it, then just stop reading this now and buy Knockout League, because this may just be a near perfect VR emulation of that tried and true boxing series. 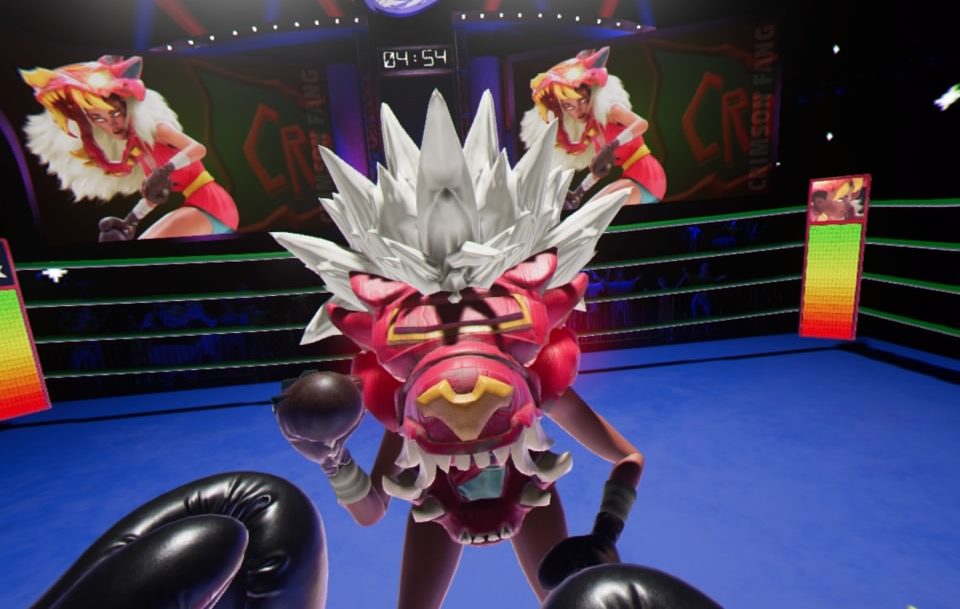 Square up against your foes, no matter what shape they come in!

Obviously, your hands are mapped to the Move controllers and are represented by some 14oz gloves in game.  From here it’s all about timing.  I really suggest playing through the tutorials as there are a few little pointers in there that will aid in your quest for the belt.  Suffice to say, there are a few punching options available, but it boils down to head shots and body shots, real-life punch power and oh so careful timing.  You can also block attacks by bringing up your hands and timing the trigger presses with the incoming attack.  I am truthfully awful at blocking and just stuck to juking and jiving like nobody’s business, which worked more often than not.  Should you need some additional practice, there are 3 training modes available which are fun and challenging and push your abilities to the limit whether it be striking, dodging or blocking.

The game is comprised of 9 fights divided into 3 classes, each one being 1 round and 6 minutes long.  If you don’t defeat your opponent in that time, you lose by default, so you best be on your ‘A’ game lest you lose in the untimeliest of fashion.  Otherwise, each fighter has their own unique strategies and tells and it’s up to you to learn them and react accordingly.  As I said, this plays identically to Punchout! and that includes the difficulty curve.  Even the 1st few fighters put me through my paces, and every fighter offers more challenge than the last, so it won’t take too long until you reach that guy (or girl) that you can’t beat easily.   Every fight ranks you after you complete it so deliver those powerful blows and don’t get hit to get the best possible score. 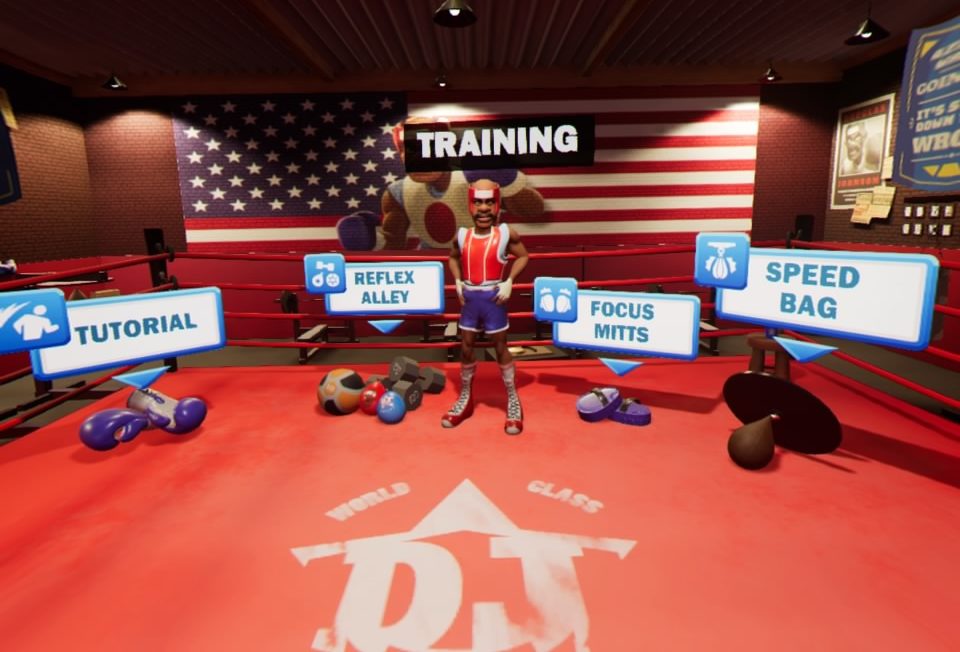 Train with coach Doug to improve those skills!

The look and style is wonderful here with characters carrying some nice, highly detailed cartoonish charm.  Fighters get crazy whacky with one wielding lighting and having robotic legs, another is a rather polite octopus and a gladiator type girl in stone armour (I don’t even know what she’s supposed to be).  The audience is a little lacking with some low resolution models that don’t carry much in the way of animation and are bathed in darkness.  Counter to that is the ring and the action inside it with some great lighting effects, stellar fighter models and some smooth animation.  Crowd aside, Knockout League looks really good and is honestly a joy to watch.

The audio is just as good, with your coach, who sounds a lot like MR. T, carrying you through the game and each character taunting you while they try and bash your head in.  My only complaint with the audio is that the taunts seemed very limited with each fighter and it only took mere seconds before I was hearing the same lines over and over.  This is expected in any game like this, but I would have liked a little more variety in the insults being flung my way. 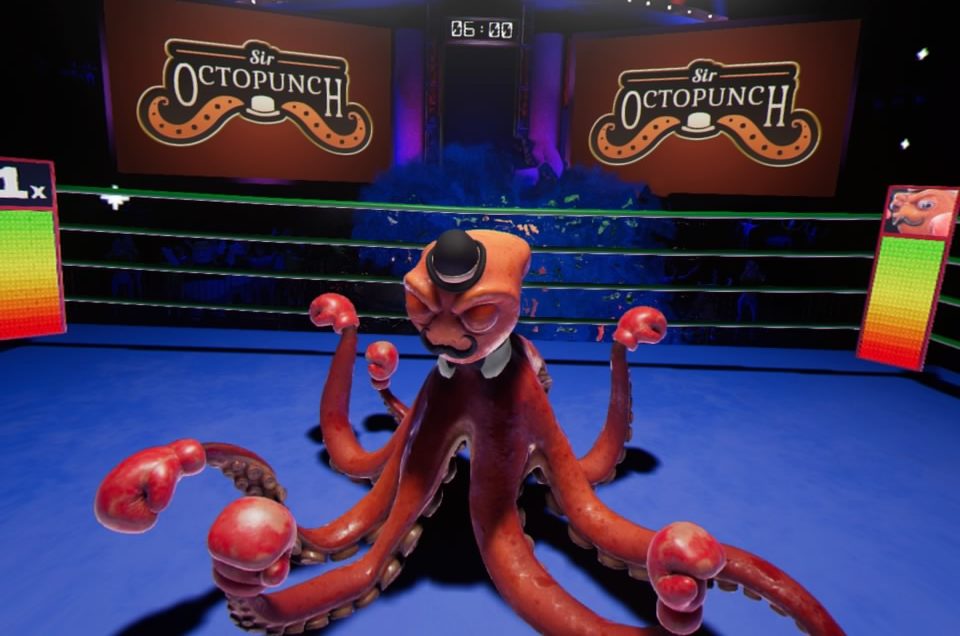 I hate this guy!

As I said, it doesn’t take too long for the difficulty to ramp up.  Truth be told, as I write this, I’m stuck on the damned cheating Octopus as he continues to pummel me into the ground.  This is to be expected from the genre, but I’m not the biggest fan of blocking content for those that just might not be physically up to the challenge.  Don’t get me wrong, I love the difficulty presented here and coming back for another round against an opponent that bested me is a motivating factor, but I think a few people may be disheartened by loss after loss.  I guess I’m asking for multiple difficulty options, if not just so people can experience the entire game.  As is mentioned, there are training modes to help develop your boxing skills and even hints are given to you during loading screens that reveal the enemy’s weaknesses and like any sport, practice will pay off.

The only other issue I’d remiss not mentioning is just how physically active Knockout League requires you to be.  Dodging punches gets intense during longer combo’s and having to sneak in punches at the right time, as well as maxing the power behind those punches in real life, makes for an exhausting game.  I personally like this aspect of the game and I am sore in places I forgot existed and it feels great.  I just think people should be aware that Knockout League is going to make you sweat, but I swear you will have fun doing it! 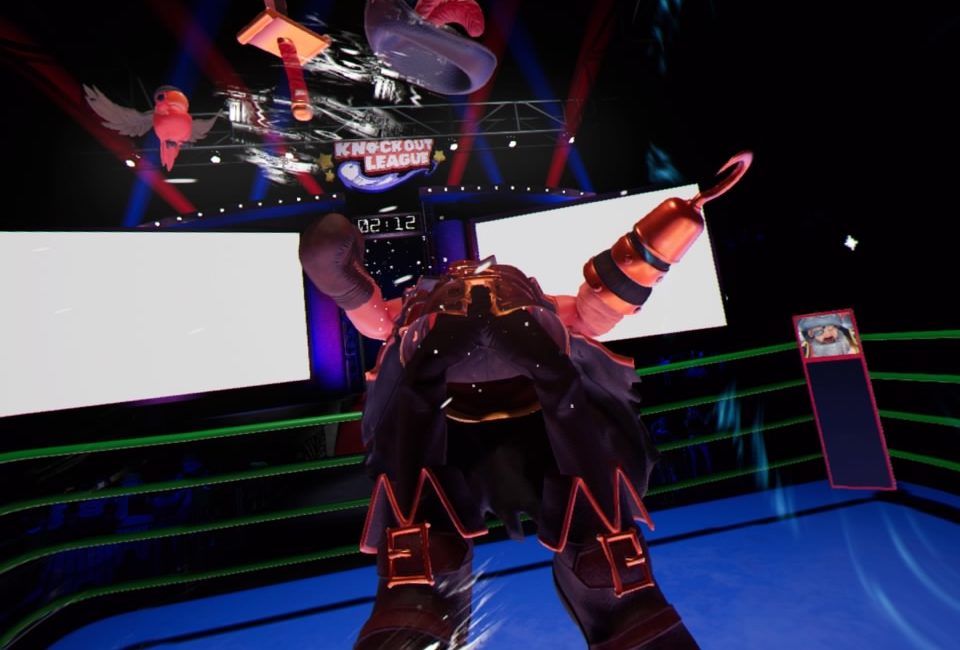 Hes about to hit the canvas…hard!

I love what Grab Games has done here by bringing a classic genre type to VR and totally paying homage to it’s predecessors.  This may not quite be the sim-boxing experience many have been waiting for, but it’s so fun and so satisfying!  Besides the regular campaign, there is also a grudge match mode with same fighters, only harder and with new moves and the promise of the leaderboards already available on PC versions of the game, coming soon to the PSVR version of the game. Oh, and there’s also a calorie counter for those who want to track such things.  For all intents and purposes, this may as well be the next title in the Punchout! series and I mean that in every positive and negative way I can.  What starts out as good clean fun quickly spirals into a physically demanding title that will test your reflexes, punching power and patience and I can’t get enough!

What would I pay? Before playing this, I thought the price seemed a little high given that there are only 9 fighters but considering the polish and charm here as well the additional grudge match mode and I think this is priced solidly at $30, provided you like games that push you to your limits.  For those who may have a more passing interest, if this even drops to $20, snag it up quick! You won’t be disappointed.