TO THE TOP aims to bring racing, super hero parkour and fantasy together into this odd sport platformer designed to get you moving.  TO THE TOP is actually a training simulation for futuristic super hero robots which is just an excuse to make things a little more nuts, and this game does get nuts.  Each race has you bouncing off walls, flying and grabbing objects all in your efforts to get to the top. 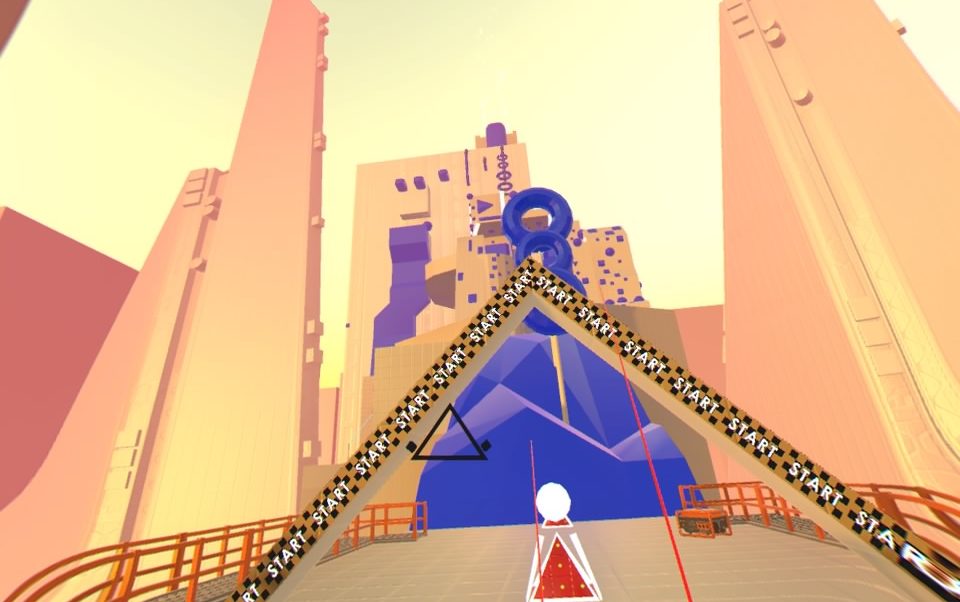 If you think this looks tall, it’s not even close to the larger stages in the game

DS4 and Move controllers are available to use but if you have the Moves, use em’!  With them you are free to make more intricate motions and pull off some crazy out of view saves, which you will appreciate once you get the later stages.  With DS4 your hands are locked into place and trigger buttons are mapped to each hand and are used to place them on the grabbable surfaces.  Dual Shock works but is cumbersome and I expect even if you do complete the campaign stages, once you start dabbling in the multiplayer, you’ll soon be put in your place.  Either way, your hands are your main mode of transportation as you use them to grab any surfaces that are blue.  You can’t walk or run but must instead propel your self forward using momentum and chaining multiple jumps together increases the distance you fling yourself.  Jumping is handled by releasing the triggers and looking where you want to jump, which will propel you forward, and on bigger falls you can guide yourself down to hopefully snag an object seemingly out of reach.  Initial stages are very simple and easy, but it doesn’t take too long before you are working your butt off trying to grab whatever you can in an attempt to get to the top of whatever stage you are on.

TO THE TOP looks…alright.  I wasn’t blown away by the visuals at play, but their simplicity allows for some absolutely massive levels with incredible draw distance.  The beginning stages are pretty stark and lack a lot of detail, with basic shapes making up a lot of the objects around you.  Later stages keep the same visual style but start to implement real world objects and even some surreal world objects like giant bodies covered in honey or a robot that you must climb.  Larger stages include a cave system, cityscapes, a child’s bedroom and so much more. While I may not have been impressed by the smaller items around you, the larger levels can be awe inspiring.  Blue will soon be your favorite color and the as the stages increase in difficulty, ramps and jumps are added to the mix as well rotors, conveyor belts, zip lines, grind rails and a tonne more ‘things’ to jump off of and ride. 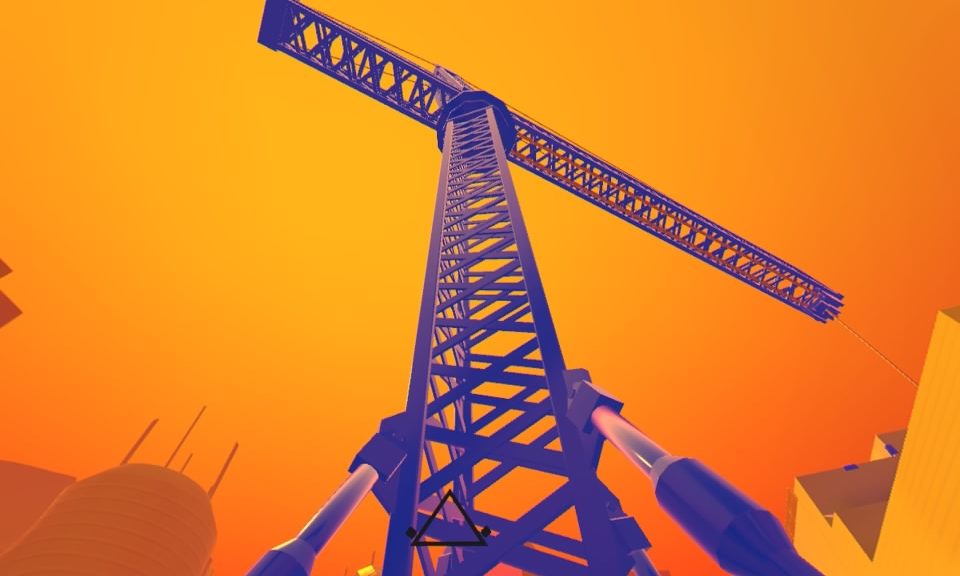 It’s easier to climb then it looks

The soundtrack contains licensed music, a rarity in VR, and is of the funkier variety, but does compliment the action quite well.  The few effects in here when you jump or land make the experience a little more visceral but perhaps my favorite bit of ear candy is the sound of the air whipping around you as you plummet from an incredible height.

TO THE TOP is thick with layers of gameplay.  Early stages introduce the base mechanics, but every successive level seems to throw something new your way and with 35+ levels, there is a lot to take in.  You can create your own blue orbs, which you can use to grab and propel yourself forward.  Stages can be really open at times providing not just multiple paths, but very well-hidden shortcuts and items that are almost always next to impossible to get.  Each campaign race requires you to place in the top 3 set race times to get a trophy and points.  Points unlock the more challenging races so should you move to slow in these races, the game will not let you proceed until you go back and place better.  Gems are hidden around the stage for some bonus objectives should you wish to seek them out and as you accrue those points, modifiers become unlocked which can be used to customize your avatar. 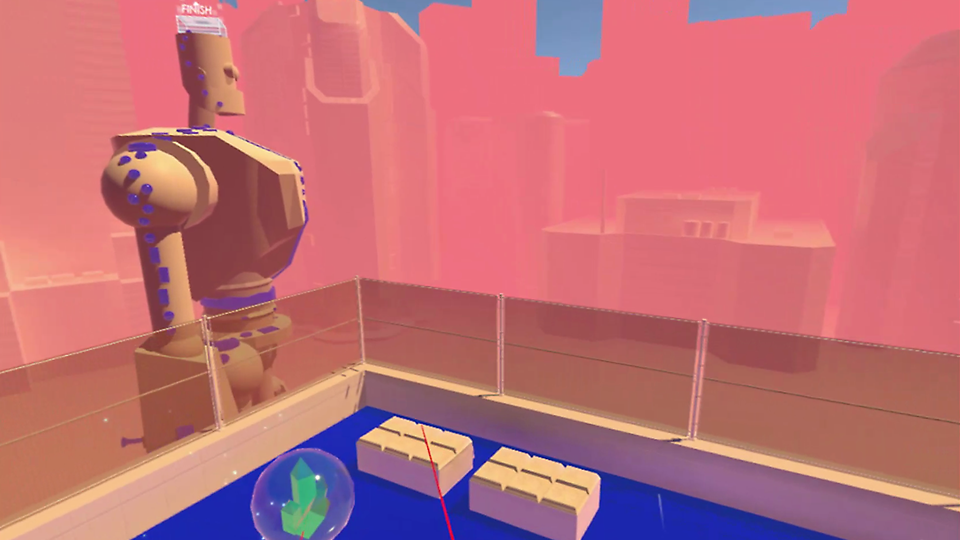 I love the use of scale in VR!

The single player is fun, but the multiplayer is where the true entertainment lies here.  No matter what stage you pick, the goal is to get to the end as fast as possible but online doesn’t really feel like a competition.  I mean, it is… but working together to get to the end as fast as you can is a large component of online play.  Each of you can create a blue ball, creating a floating point you can grab.  Chain a few of those together and you could bypass whole sections of a level with a well-timed series of jumps.  You and up to 7 other players (I’ve only seen 5 at the most) can hop in and just start racing and thanks to the in-game voice chat, talking about strategies, or trash talking, is a readily available option.  Each stage has a countdown timer, so you can complete the race as many times as you want in that time, improving upon your score in the process or, if you think your time is good enough to win, you can explore and collect some of those gems lying around the level.

It appears that all the stages are unlocked in the multiplayer mode but are locked in single player until you accrue enough trophies from the previous stages.  Considering the difficulty in some of the stages, just getting to the end is a feat on its own but doing so before a specific time can be maddening, especially if you just miss that time by mere seconds.  I get that this is a great way to train, get better and memorize the levels, but considering the maps are all playable online, it seems like an unnecessary way to extend the content.  On that note, there is a pretty steep learning curve here and what may seem easy early on soon won’t be enough to traverse the harder stages as you need to master the controls to make those near impossible leaps, so frustration will totally rear its ugly head a lot here. 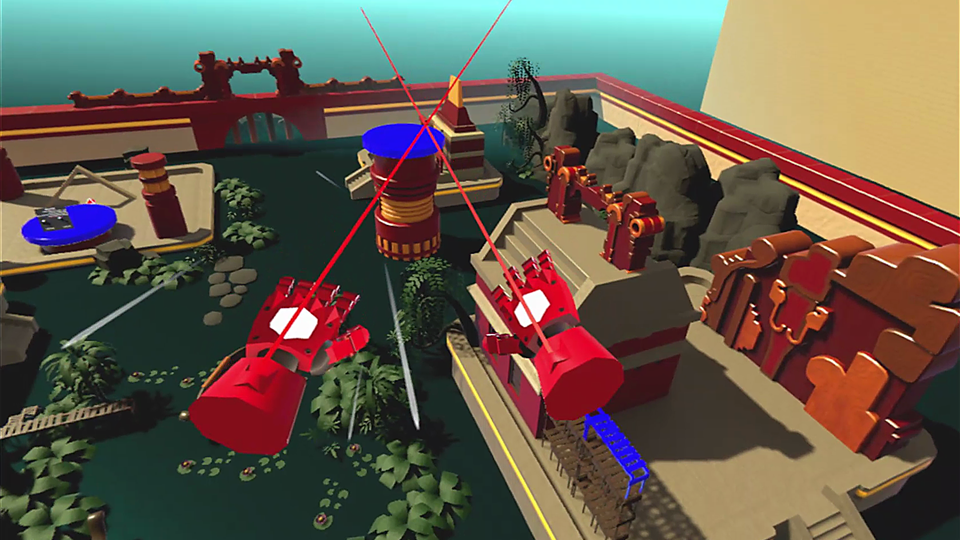 You can eventually unlock the ability to fly!

TO THE TOP boasts a tonne of gameplay, not only to challenge the single player scores and beat fellow racers, but to also unlock additional customization options.  Your avatar is a head, torso and hands, each of which can be customized to your liking.  Later levels introduce skating elements like staying on a track through a loop or grinding down long rails, which I have a ton of difficulty doing, and even more elements then that.  You can unlock gloves which allow you to fly around the stages, hammering home that this is a super hero training simulation, and the host of hidden items scattered around the stage offers a lot of replay to the game.  Each stage contains checkpoints that you must activate to use and what’s awesome about those is they also reset your time back to your last checkpoint so multiple deaths at one frustrating point in any race become a little less maddening. 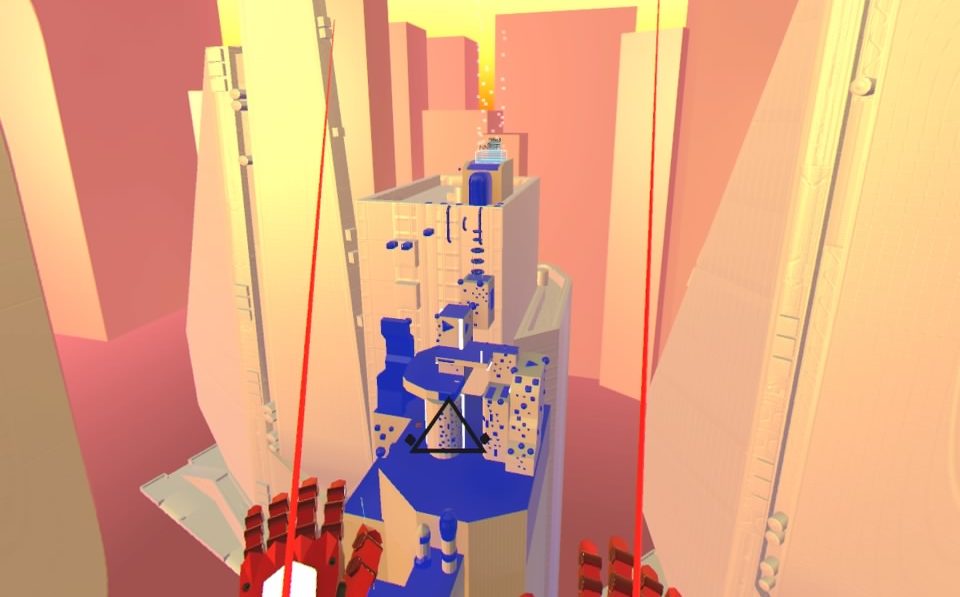 Frustrations aside, TO THE TOP is a blast and while it may not look the prettiest, you can’t help but get lost in these massive stages.  I fully admit to not completing the campaign stages yet but I’m honestly not the great at the game, but I am getting better, and I want to get better.  TO THE TOP keeps calling me back again and again and is as much fun to race against others as it is to just explore the stages.  It’s a little physically demanding, but thanks some solid game design, it never gets to intense, other than maybe some sore wrists after some extended game time.  TO THE TOP is a must buy for those looking for an insane platformer, even if you don’t care about the competitive side of things.

What would I pay?  $20 for this is an absolute steal and I would have been happy with $30 or maybe even more.  It’s loaded with content, rewarding gameplay and a great multiplayer component that is both competitive and cooperative.  Buy it now before the devs realize they are under charging for this gem!

Electric Hat Games provided The VR Grid with a review for this title and, regardless of this review, we thank the for that!