I have been waiting for a proper VR Kart Racer since my first taste of that genre in VR in the less then stellar VR Karts waaaay back in 2016.  Teases of Mario Kart VR at Theme Parks only added to my annoyance that we couldn’t get a comparable experience for our headsets.   Now we have our 2nd Kart racer in Touring Karts which takes that classic Kart racing formula and adapts it to VR. 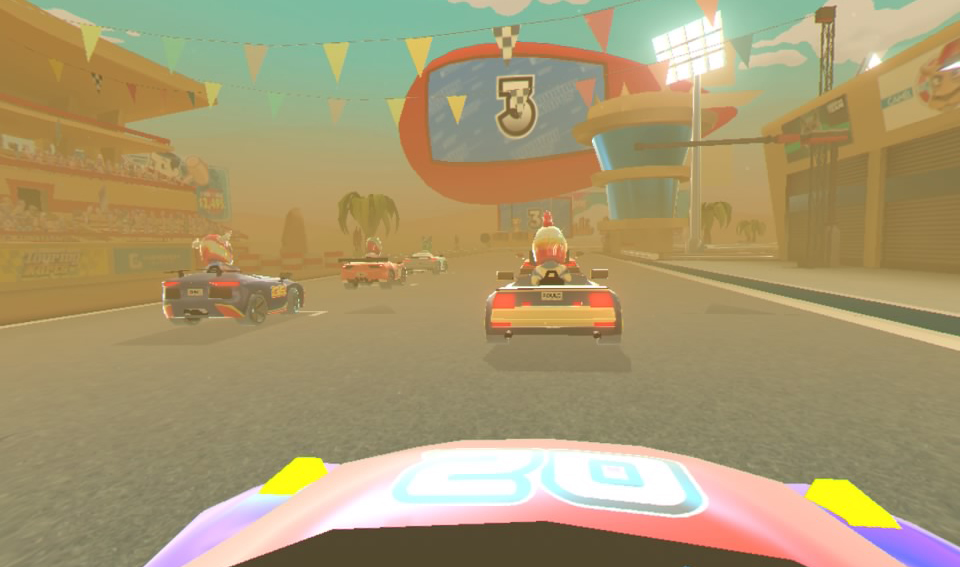 The control options in here are nuts with multiple choices for each controller. You can play with the DS4 without any tracking, DS4 with tracking, 2 Moves, A supported Wheel and a Move, or the 3dRudder and a Move and each method feels substantially different from one another with the Moves being my least favorite and the Wheel/Move combo delivering the best experience by far.  That said, all the control methods do work as intended, even the 3dRudder which has you pushing forward to accelerate and twisting to turn, which sounds more awkward then it actually is and might be the preferred way to play for those that own the peripheral.  However you decide to play, if you have every played this genre before, then you know what’s expected of you here.  You and 7 other racers compete in singles or tournament races with 3 different difficulties of AI available on tracks inspired by countries from around the world.  Question blocks on each course contain items you can use to help you like speed shakes or invulnerability or items like a rocket launcher, giant chicken, mallet and many more to be used against your foes or combined with each other for more nutty effects.  Each course completed give you loot you can use to purchase new tracks, vehicle upgrades and modifications to yours or your vehicles appearance.  Online single and tournament modes are available as are daily challenges which give out bonus loot.  Objectives are also sprinkled throughout the game and need to be completed for more bonus loot so while there is a lot that needs to be purchased and unlocked, the amount of loot given lets you access the new content at a steady pace. 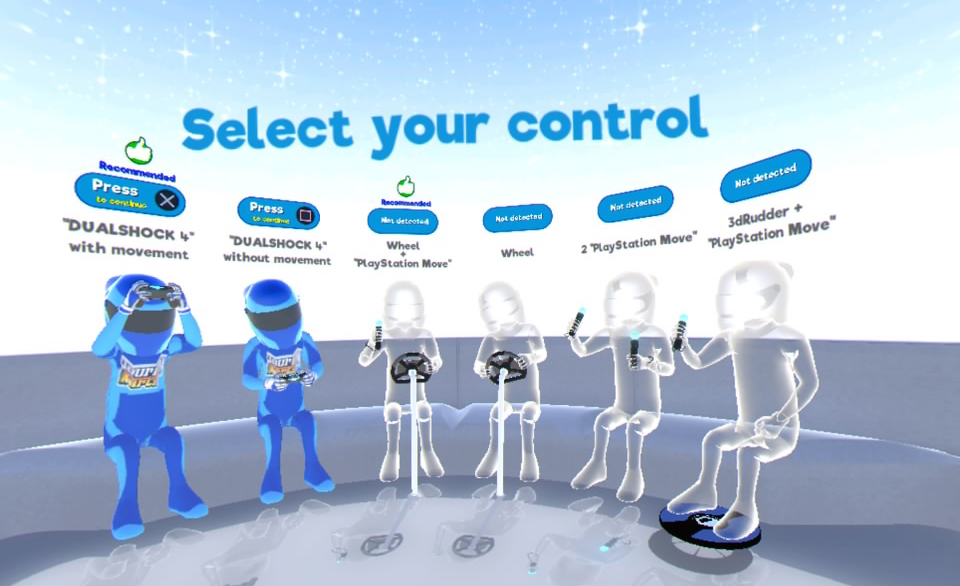 Touring Karts opts for a simplistic design and quite honestly looks like a cleaned up N64 game. Texture quality is lacking but given how cartoonish the presentation is, I really didn’t take to much offence to it, especially when you see just how much madness can occur in a race.  A giant monkey might be tossing Giant bananas or barrels on to the course or be riding a giant dog VERY reminiscent of Walkers in Star Wars.  Once you start unlocking custom masks and cars the nostalgia factor kicks in with masks that looks like Master Chief, Boba Fett and many more with the DeLorean, Kitt and a bunch more pop-culture classics that immediately won me over.  The courses come in a wide variety thanks to the various locales you’ll visit.  Each course feels wholly unique and each has their own tricks with shortcuts and boosts scattered throughout along with areas of the course that suddenly rise and fall causing additional chaos on the courses.  Some weather effects show up so you may be racing in the rain or have the sun setting in the background which does add some nice flare to the stages that have that.  It’s more a quantity vs quality  when it comes to fidelity of this game, but it looks clear in the headset and the shear amount of stuff that pops up in any course is a treat to see and by no means does it look bad.  You can also switch from a few different views besides being in first-person behind the wheel, but I felt like all the other options ruined immersion.

The Karts all sound great and the blatant homage to Mario Kart, especially the song the plays during the menu, reminded me of that Nintendo franchise while I played this wasn’t a bad thing.  The karts and effects all sound spot on but the star of the show is the color commentator who’s dry delivery was initially off-putting and I questioned the direction the developers went with that, but soon enough he grew on me as he gave some generic play-by-play of my actions.  He’ll spout out some cheesy pop-culture quotes and references which, like I said, are eye roll worthy but once I got used to him, I appreciated the vocal presence save for the fact that he will repeat the same few lines a little too often, but that isn’t exactly unexpected from a title like this. 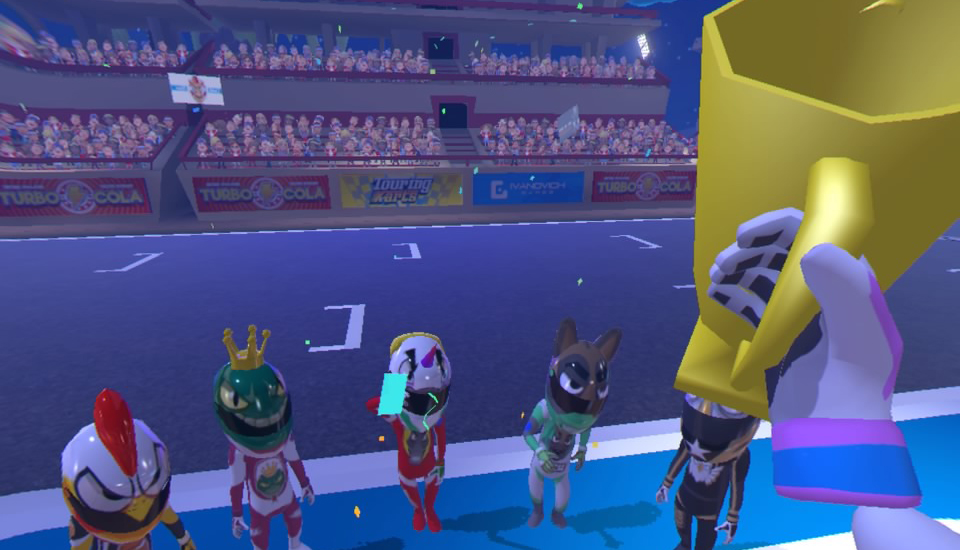 looking down at the losers is always a treat!

I really enjoy Touring Karts either on or off-line as the AI is just as challenging as human opponents.  As much as I do like Touring Karts, it’s not without issue as there is a fair bit of jank, finickiness and glitches that do hamper the experience.  Collision detection is at best a gamble and at worse insanity and you never know what’s going to happen when you collide with anything expect for the walls, which causes an instant respawn back on the track.  Ramming other cars could cause you to climb up them or you to under them, which could also result in a complete loss of control as you careen toward the walls.  That makes the opening moments of each race a hectic scramble to get ahead as fast as possible without touching anyone lest a massive pileup occur.  Once the racers spread out a bit, this becomes way less of an issue but still occurs as you run into whatever happens to be on the road.  A few ramps, when hit wrong cause your vehicle to land on its side where you sit there for at least 5 seconds waiting for a respawn and some of the traps in the game do feel a little cheap, but as everyone is playing on an even playing field, nothing in here is game breaking.  It should be mentioned that this game is playable out of VR as well. 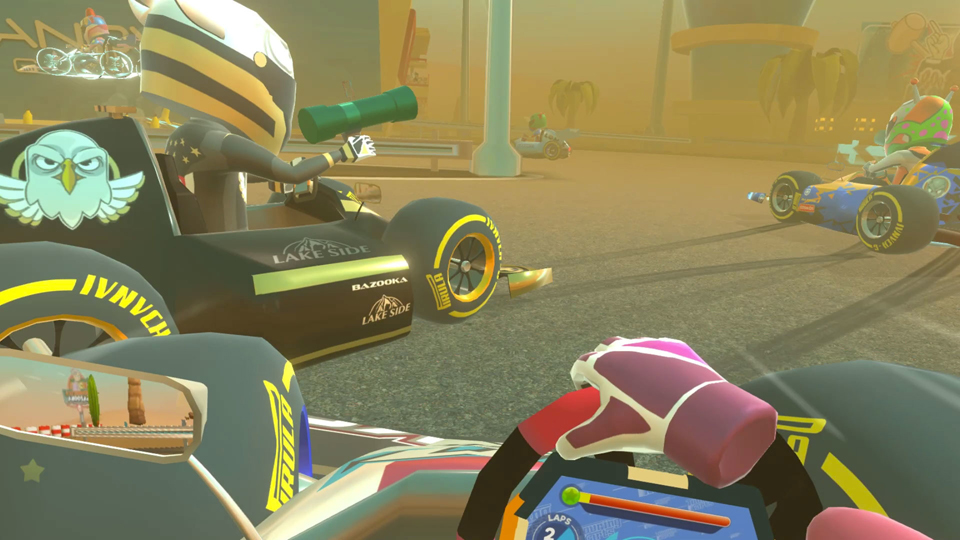 Some races get pretty intense!

Touring Karts is huge step in the right direction for what we should be expecting out of Kart racers going forward as it hit all the necessary bullet points to make this fun and repayable title remission of the more popular brands available out of VR.  Physically being in the kart as you drive one-handed while tossing an item with the other is a gamer’s dream come true and when you add in the shear amount of tracks and customizations, it’s not to hard to return to this game to unlock more stuff, beat your previous best and maybe attempt to school some people online. It has issues for sure, but I can’t deny just how much fun I’m having with this!

What would I pay?  This is easily worth the $20 as it stands today, and I expect a bulk of my issues to be addressed after launch.  If you have been waiting for a Mario Kart clone to come to VR, Touring Karts does a commendable job at kart racing and has extra additions that make it feel unique and ramp up the fun factor.

Ivanovich Games provided The VR Grid with a press code for this title and, regardless of this review we thank them for that!