2020 might be called many things, but for PlayStation VR it seems to be the year of melee combat as we have gotten more than a few entries into this VR sub-genre that has you facing foes while armed with a variety of handheld weapons.  Gorn, Until You Fall, Swordsman VR & Ninja Legends were earlier entries utilizing melee combat with Swords of Gargantua bringing something entirely new to our headsets that few other games have done before.  That specific thing is multiplayer co-op, which allows you and up to 3 other allies to take on the hordes of giant soldiers that stand in your way in this rogue-like arena battler. 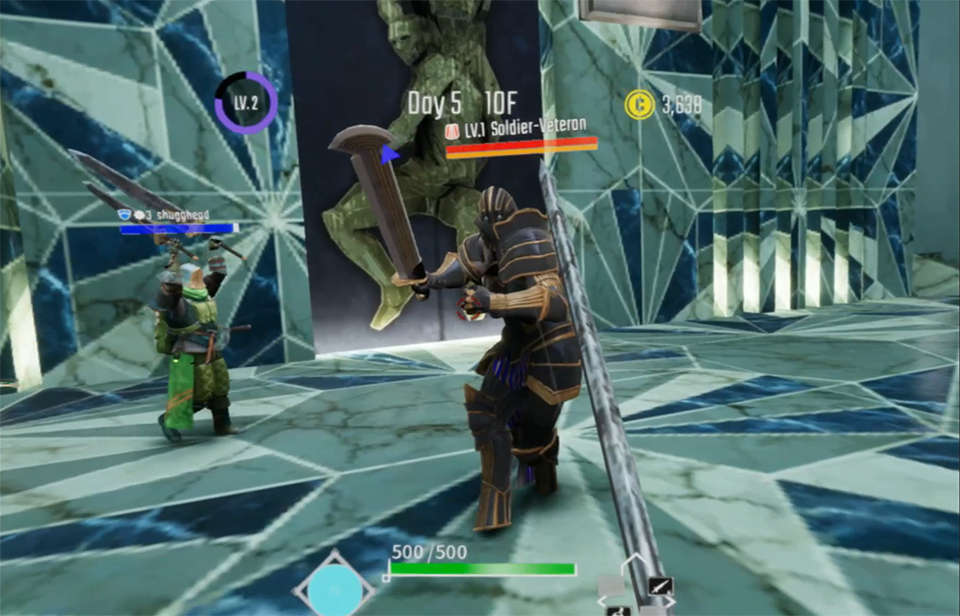 I think he’s compensating for something.

While the PC and Quest headsets have thumb sticks as the typical movement option, PlayStation VR users will be relegated to using buttons to move around the map which is nothing short of cumbersome though within an hour or so I was mostly comfortable navigating the arenas.  On you are 4 item and weapon slots which you can customize before you start your next attempt at fighting your way through the 101 different stages to get to the big bad boss.  Melee combat falls somewhere in the middle of Until You Fall and Swordsman VR with you being able to swing wildly at the enemies coming at you, but you can trigger combo attacks that require you to hit specific points on the enemy’s bodies for extra damage.  Your weapons will degrade with use and will become near useless until you holster them on your body and let them repair.   Continued use of theses worn weapons will cause them to break, making them completely useless and must be thrown away.  As this is a rogue-like each stage will give you randomized opponents as well as having various weapons scattered around each arena.   Throughout the course of the “campaign” you’ll be offered different boosts that affect your health and abilities during that run with loot and weapons accrued being brought back to the hub area where you can spend them on weapon and personal, permanent upgrades.  Upgrading your stats is easy with you simply needing to spend the money required on said boost and being high enough level to use them as each new experience level reached allows for 1 additional permanent buff, which can be re-ordered at anytime should not be happy with your choices.  Weapons upgrades are much more convoluted as you can’t actually upgrade them, but rather strengthen them by merging multiple versions of the same level item together for more durability and given that each run will often give you higher level weapons, it’s probably best to spend your money on yourself 1st, then your weapons. 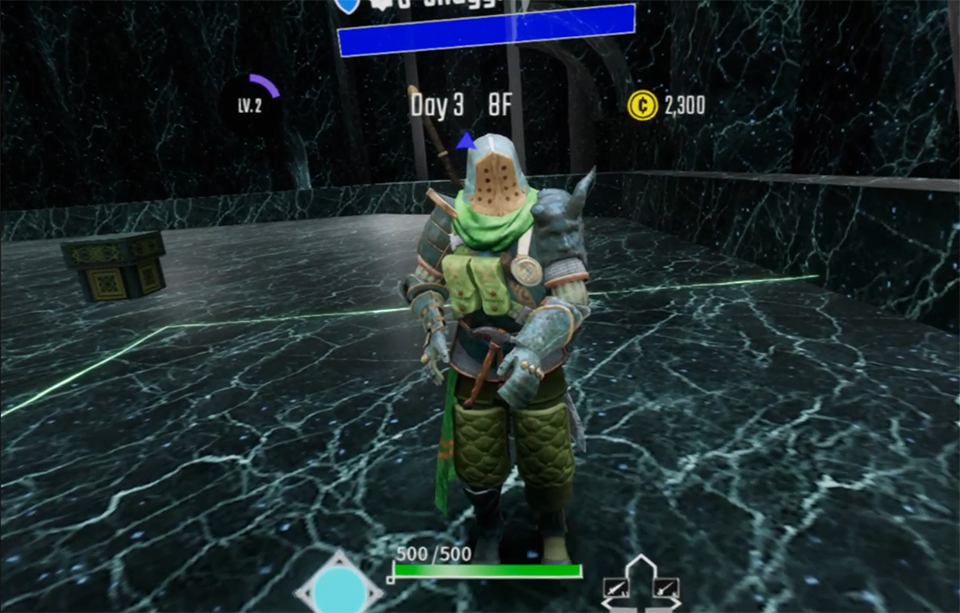 Say hello to your little friend!

In a game based almost entirely around melee combat, the one thing that needs to feel authentic is the physicality in battles and for the most part, I think Gargantua gets it right, but it can still devolve into a waggle fest.  Outside of a combo, precision strikes offer no real reward so those looking to head stab their way through a stage will be met with a quick death.  Instead, each of your enemies has a set amount of hit points and you must whittle down their health while dodging, blocking, parrying, and attacking them.  Parrying works very similar to Golem with the baddies telegraphing their strikes so you can get into position and when that works, you can start that combo and deliver extra damage.  The problem is that it doesn’t always work, especially when your foes get to close too you.  Often times they will kick you back to make space, but just as often they stay too close, delivering strikes you just can’t block.  Thankfully, there is a dash mechanic that is activated by pressing the left move button and leaning in the direction you wish to move which will have you lunge a small distance.  It’s an ability you need to master as after wave 20 or so, foes become increasingly challenging and you’ll need to utilize every advantage you can to stay in the fight.  Your final advantage is the ability to supercharge your weapon, which requires you to have a kill meter full and sliding an empty hand across the blade in your other hand, giving you some precious seconds to unleash massive damage. 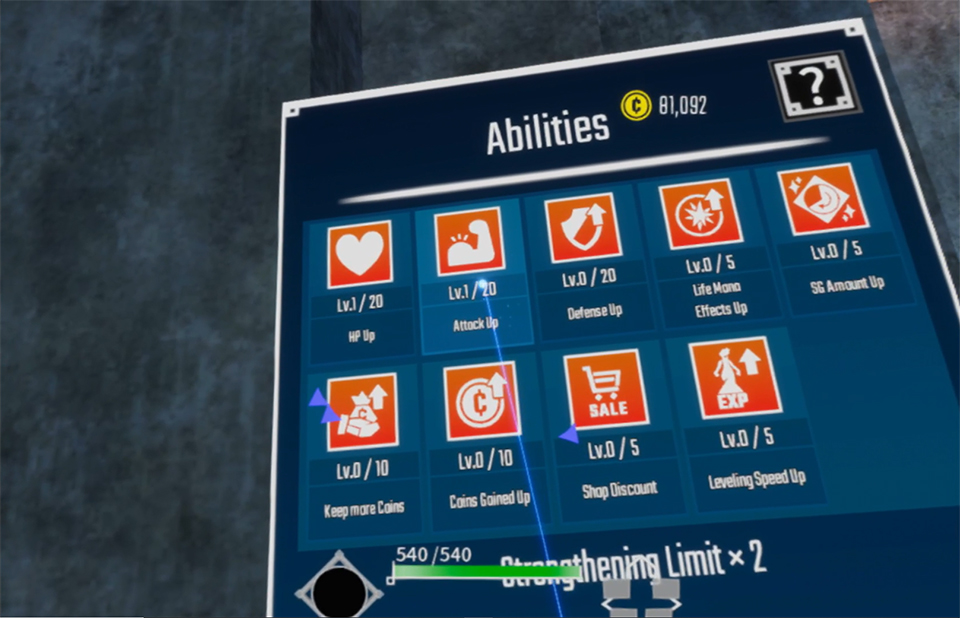 Maxing out character is going to take a bit!

Swords of Gargantua looks alright though beyond the scale of some of the enemies and the final boss, there’s not a lot here to boast about.  While there are a few arena designs in here, most are just re-skins of flat geometric shapes that make them look very stark and drab.  You have a full body avatar, which I always appreciate in VR, as do any companions you play with though even with everyone swinging wildly, animations can still come off looking stiff.  Enemies however move much more fluidly once they teleport in via a sort of spawned square box, they immediately seek out their foes.  Peons are almost the same size as you, with larger armour-clad knights also appearing quite often as well as a few ranged foes that will try and pick you off from afar with a variety of magical attacks.  Beyond those common foes are some Ninja type guys who spin and flip a ton and massive bulbous juggernauts armed with huge hammers that can deal some hefty damage.  With some semi-realistic physics at play, there can be some issues involved with colliding weapons and bodies but for the most part, everything looks and works as it should with weapons impacting satisfyingly against whatever you are hitting.

On the sound side, effects sound as they should though you will not hear much beyond the clanging of steel as your foes make little noise besides their attacks.  The soundtrack gave me some Final Fantasy vibes as it goes for a melodic fantasy orchestral sound that works but becomes somewhat underwhelming after a little while and I wouldn’t have minded a few intense tracks to get the blood flowing, especially in the later rounds when any errant hit against you could spell your doom.  In-game chat is available and works flawlessly, even during loading screens which I greatly appreciated, and once again everything in the sound department works, just don’t expect to be blown away. 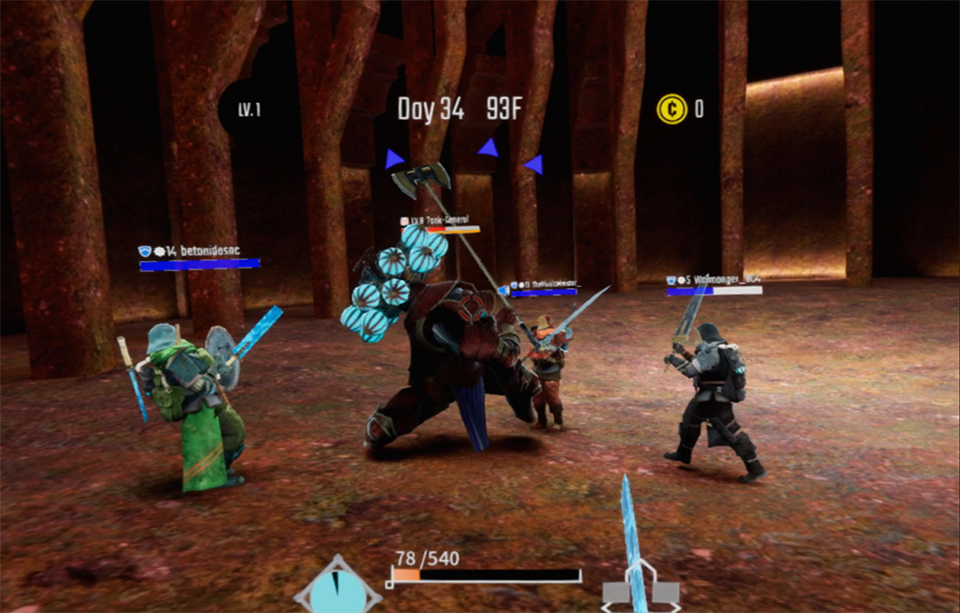 The more players, the merrier!

Sword of Gargantua’s largest fault is its sluggish control scheme combined with the fact that enemies will often surround you, which is awesome if you have 360 tracking but sadly, that’s not the case for PSVR users.  The turn buttons work but with no way to adjust their sensitivity, turning on the spot can feel painfully slow when you are surrounded.  Because all of your movement options are mapped to buttons, you are forced to move one direction at a time as your thumbs can only hit so many buttons at once.  The initial stages will be a breeze to get through but once you hit those harder stages, death is almost a guarantee if playing alone as the game just wasn’t properly ported with PSVR’s limited tracking in mind and makes for a frustrating experience.  That said, playing with others remedies much of these issues as it’s a much fairer playing field allowing you and your pals to gang up on the bad guys or lure them around the map.  Should any one of you fall in battle, one of you needs to stand near your fallen comrade for a few seconds to bring him or her back.  Magical potions are available that create bubble effects for you and your allies that can heal or boost your attacks and defences.  In truth I really disliked playing alone as it really felt unfair, way to grindy and frankly lonely.  Jumping in with some friends and some randoms made the game infinitely more enjoyable as it just felt more balanced and allowed for advantages you just don’t get going at it alone including making it further and getting more loot and experience. 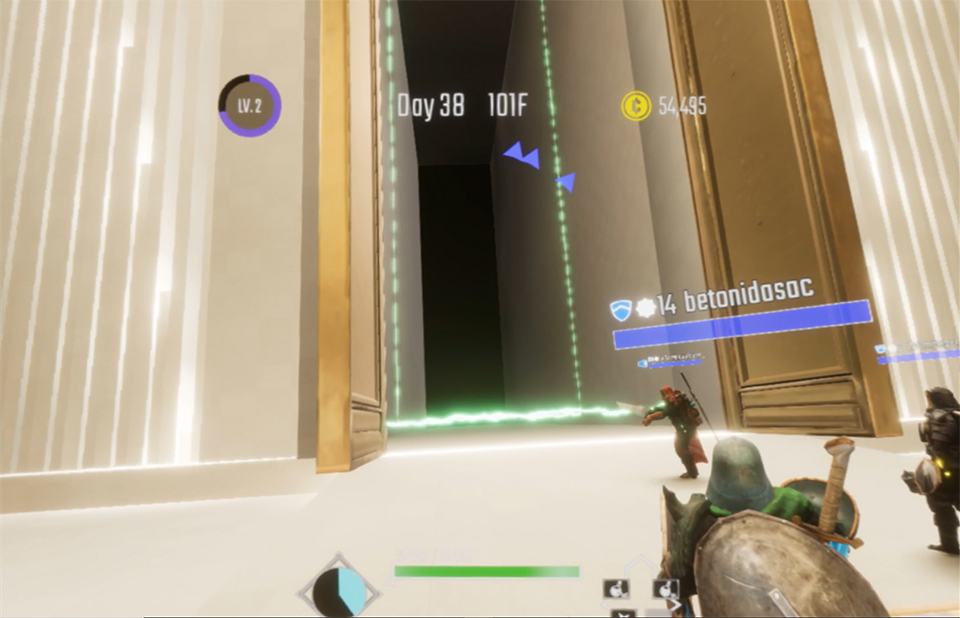 Through these gates lies only death.

Swords of Gargantua works best when played with others and in my time with the game, I never had troubles finding someone to play with and because of that, as long as you are willing to play online then I think you’ll have a blast.  It can be janky at times and the controls are cumbersome at best, but once I got used to the game’s mechanics and shortcomings, I had an absolute blast taking on all comers with some friends by my side.  That said, if you are looking for a satisfying single-player experience, you should probably look past this as playing this alone only offers frustration and annoyance.

What would I pay? This is $30 US which is just too steep for what devolves into fighting the same few enemy types over and over again, regardless of whether you play with friends or not.  That said, when I played with the right people, I can’t deny just how much fun I was having

Thirdverse provided The VR Grid with a press code for this title and, regardless of this review, we thank them for that!