Slum Ball, at its core is a Breakout style game.  With VR, we have seen a few of these with Proton Pulse and Cyber Pong being of notable mention.  Well now we have Slum Ball, which takes that classic formula and flips it on its head by adding realistic environments and items as well a bunch of other modes to spice up the gameplay. 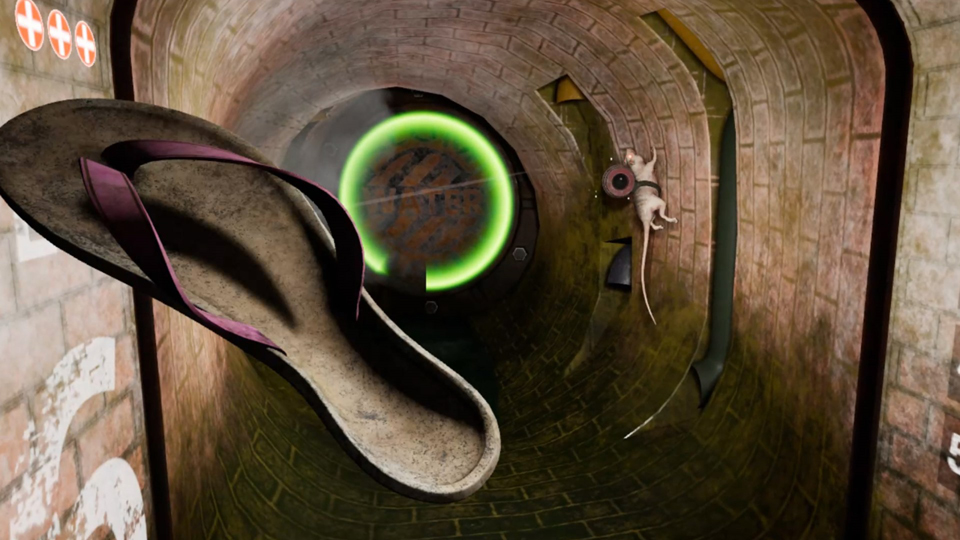 Get that sandle and get whacking! Note: Realistic lighting effects not included in PSVR version.

You can use 2 Move controllers for this, though you could get away with one if you are willing to move around a bit.  No matter which mode you find yourself in, you hold a paddle of some type in your hand and must smack a ball, or in this case a can, at the environment ahead of you, typically destroying items in that area; flowerpots, gas cans and so on.  As you progress through the campaign stages, you’ll find the action gets a little random as objects begin to move around the environment and game modes change up.  There are some rhythm sections where objects come at you to a beat, a target practice section that has hoops slowly move towards you, one that has you bouncing bombs into trash cans and a few more.  I had to try and hit a rat with a canon on his back that launched skulls in my direction and had to hit targets on a wall for max points.  The can is always drawn toward you so it never gets caught in the environment and thanks to the more realistic style level geometry, your can might bounce off errant corners or edges causing some last second frenetic movements to save you from losing health.  At any time with 2 Moves you can swap your paddle from left to right hand with a press of a button ensuring you have the best chance at deflecting those cans, or whatever the game throws your way.

Slum Ball brags about photo-realistic visuals which I suppose is true enough assuming those photos don’t look good in the 1st place.  The backgrounds change up from sewers to back alleys, roadways, rooms and a few others but none of them look particularly good and textures sometimes take a second or 2 to pop in, which doesn’t help anything.  That’s not to say they look bad, but in a game that hypes up how real the visuals look, the ball has been dropped in here hard.  The environments are all static with targets being added after the fact, at a different resolution then the backgrounds, making them stand out like a bad green-screen effect.  Besides the static shadows in the environment, there are no lighting effects to speak of making everything from pots to chickens and balloons just look flat.  The stuff you are hitting doesn’t look to impressive anyways and Slum Ball ends up looking more like a collection of assets smashed into a game, just with a common theme. 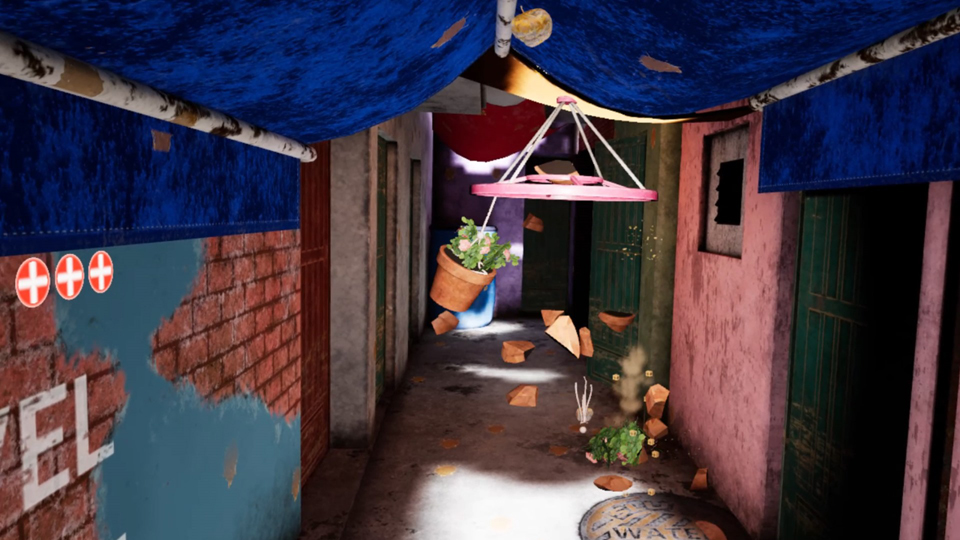 With how I just described the visuals, I’m sure you are expecting the audio to be on the same level and surprisingly enough, it’s miles ahead of the graphics.  Interspersed throughout the games is a variety of techno and easy listening tracks that don’t really fit the games aesthetic but are enjoyable enough to listen too no matter which track you get.  Surprisingly, those rhythm stages I mentioned feature licensed tracks from artists like the Red Hot Chili Peppers and Metallica!!  I should clarify that while those artists songs are in here, they are actually covers, not the actual artists singing them and do come off as sounding “off”, especially when you can hear a singers not American accent.  Still, the audio presentation impressed me and kept me in the game longer then I expected.

My largest issue with Slum Ball is the physics and the environment design.  As the environments are supposed to be more realistic, that includes the geometry meaning your tin can ball can hit an unseen corner and go flying in a weird direction which I’m sure is by design and supposed to be fun, but comes as more unfair and frustrating.  Accuracy is key to high scores and in some cases even passing the stages and I found it to be very, VERY tricky to aim my shots, often having my ball just bounce around the stage until I luckily hit what I needed or failed.  This isn’t always the case and some levels I did breeze through, but it just felt like luck more then skill.   You can adjust your height or move the whole level to ensure you can adequately cover the space you need to guard and levers to your right let you pick from a few seemingly random stages out of the 50 or so avaialabe.  Leaderboards are local only and while the game boasts a tournament mode in the store, I couldn’t find any game option besides the campaign. 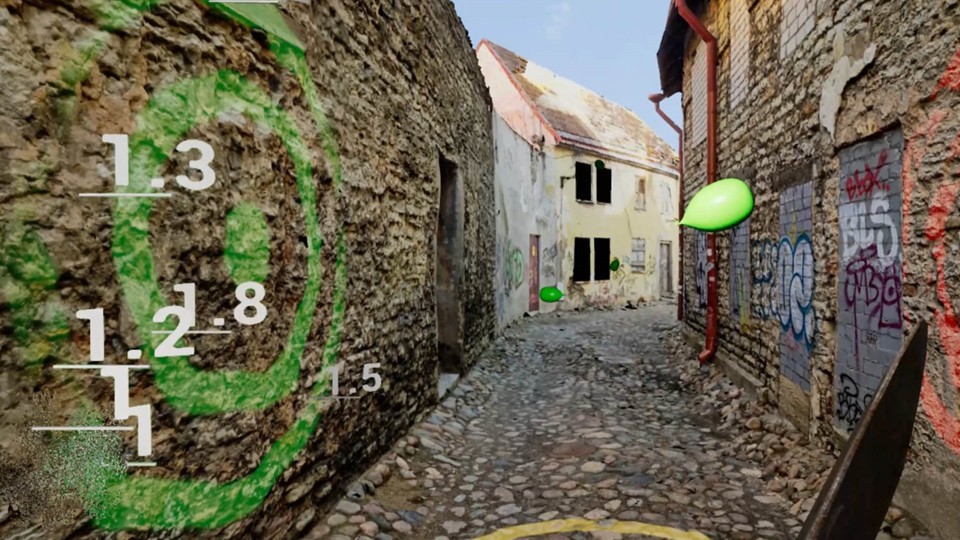 Yup, these are slums!

Slum Ball isn’t a bad game and doesn’t take itself too seriously.  I enjoyed the soundtrack and even the cover songs amused me.  When it works it’s satisfying and fun, but whenever the game requires pinpoint accurate shots, my enjoyment quickly went to the wayside and I was left feeling frustrated and a little annoyed.  This also boasts being a workout game but given just how little you need to move, at best it’s a warmup for something else and even still, I’d be hard pressed to put it anywhere near the workout category.  If you enjoy breakout style games, you’ll probably have some fun with this one, but be warned, it’s rough are around the edges and has a bunch of levels that aren’t Breakout.

What would I pay? This is $15 and I don’t think I’d go past $5.  If you are a fan of Breakout style games, then maybe push that to $10 but this really feels like a budget title that needs more TLC.  The content value is here, but it feels more like a collection of not-quite-right mini-games then anything else.

U24 Solutions provided The VR Grid with a press code for this title and, regardless of this review, we thank them for that!