Since the PSVR launched almost a year ago (CRAZY!), headset owners have been clamoring for all types of content.  Resident Evil scratched the survival horror itch while Farpoint showed the potential of an action based FPS and Eve:Valkyrie showed us what to expect in some space dog fights.  We have had racing, puzzle, exploration and a host of other genres all coming (and going) to the platform.  One genre we have yet see for the PSVR is competitive sport, and now we have Sparc.  While previous titles like Headball, Holoball and Proton Pulse have used similar mechanics displayed in Sparc, all of those were lacking one critical component; online multiplayer. 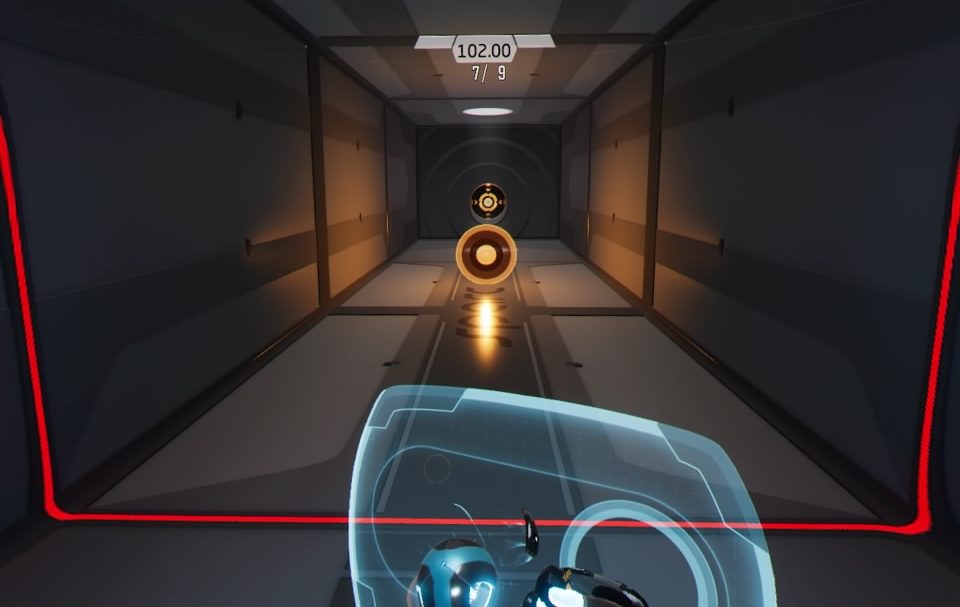 The single player content is fun and challenging, but it’s not why you play the game.

Unlike the predecessors mentioned above, which mostly boiled down to VR pong, Sparc attempts to add a whole lot of depth with a plethora of rules that go beyond simply stopping a ball from getting past you (though that is still included).  Utilizing 2 move controllers, each mapped to an in game “glove” of sorts that act as your main equipment in the game.  The titular ‘Sparc’ is your ball and your glove allow you to catch and deflect it.  Each player is assigned their own ball and the objective is to hit your opponent, or get the ball past them into a relatively small goal.  If your ball misses and bounces or deflects back, you need to catch it or deflect it in return or risk getting a point scored against you, all while keeping an eye on your opponent’s ball as he tries to score on you at the same time.  Like most sports, the rules sound more complicated than they are, so it’s best to just play through the tutorial and learn by trial and error in the multiplayer.

The tutorial explains the rules and controls and though lengthy, is necessary to hammer home everything you need to be aware of. The most challenging part of this game is the controls.  While the mapping seems spot on and the tracking is some of the best I have seen on VR, that doesn’t translate into perfectly tossed shots.  In fact, even after a few hours of gameplay I still have trouble throwing where I want to throw, though I have noticed steady improvement in my accuracy the more I play(thankfully, there is aim assist at play, which helps).  Besides tossing, you can dodge or  deflect incoming Sparcs with a hand-mounted shield, which is activated while holding on to your own sparc.  It may just be me, but I am terrible at this mechanic; it’s easy enough to deflect a sparc, but to accurately aim that deflection is an entirely different monster.  While my tossing has seen noticeable improvement, my deflection skills are borderline embarrassing.  Thankfully, outside of the single-player content, everyone is on the same playing field so while it may difficult, it’s not unfair. 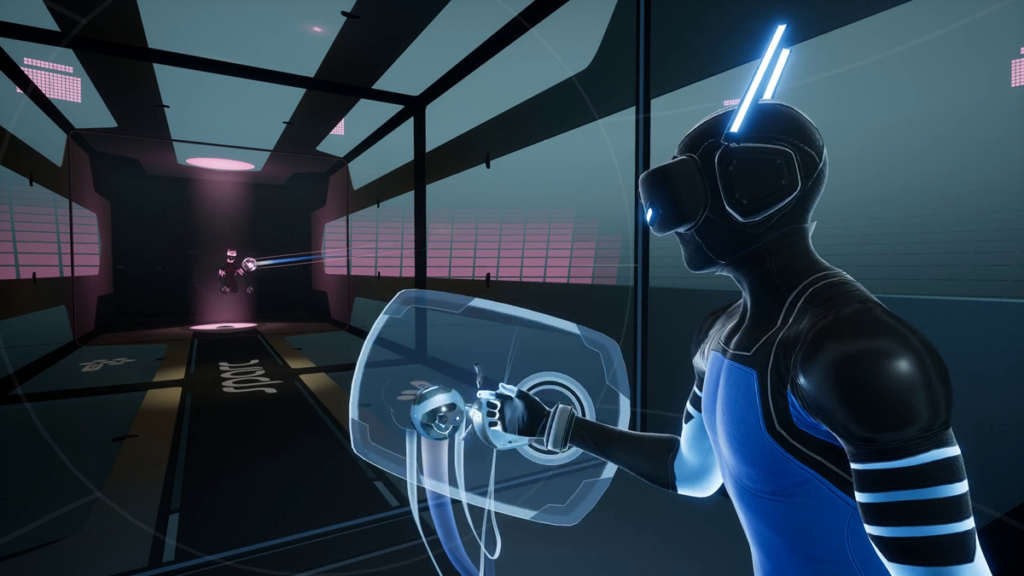 Like any sport, it’ll take time master all the nuances of the game

Besides the VERY RECOMMENDED tutorial, the only other single player content is a character customization mode and a few challenges that involve practicing all your skills in a variety of time based objectives.  Throw you sparc at specific targets around the arena, or deflect sparcs at other targets, or both.  These are a great help at honing your skills, though to truly master them, you’re going to need to spend hours playing the multiplayer and just learning how your real world throws translate to the virtual world.   The challenge modes do offer online and personal leaderboards, which add to the replayability, if not just to keep your #1 position in the ranks…if you care about such things.

Right off the bat all the character customization options are at your disposal so change your head shape, visor, mask, gloves and uniform as you see fit and, when combined with the color options, allows you to make and avatar that feels like your own.  The mapping and tracking on your avatar is some of the best I’ve seen in VR and makes for a very fluid, very realistic feeling game.  Avatars don’t have legs, but when I think about how many games have some really wonky leg animations, it’s actually a good thing as those kinds of visual distractions have just been eliminated from the game.

The arena is just a long hallway with your opponent at the other end.  It actually looks really akin to Holoball from PlayStation VR Worlds.  The room you are in does look a little drab, but not terrible and once the game starts, it’s actually a blessing in disguise that the levels don’t’ contain lots of details and distractions, so you can focus solely on the action at hand.   Navigating the menus is done by pointing your hands at whatever option is highlighted and hitting the trigger.  I think this is only the 2nd game for the PSVR to accurately display the limits of PSVR tracking.  Calibrating your position at the games onset includes setting your height and position from the camera, centering you to the games action.  Go too far or passed the edge of the camera’s detection range and transparent red lines begin to fill the screen.  EVERY VR GAME NEEDS TO DO SOMETHING LIKE THIS!!!!  It’s a great way to keep track of your position and re-center yourself if you get a little to mobile. This mechanic works flawlessly in my experience and keeps you focused on the action, without constantly losing track of yourself in the real world. 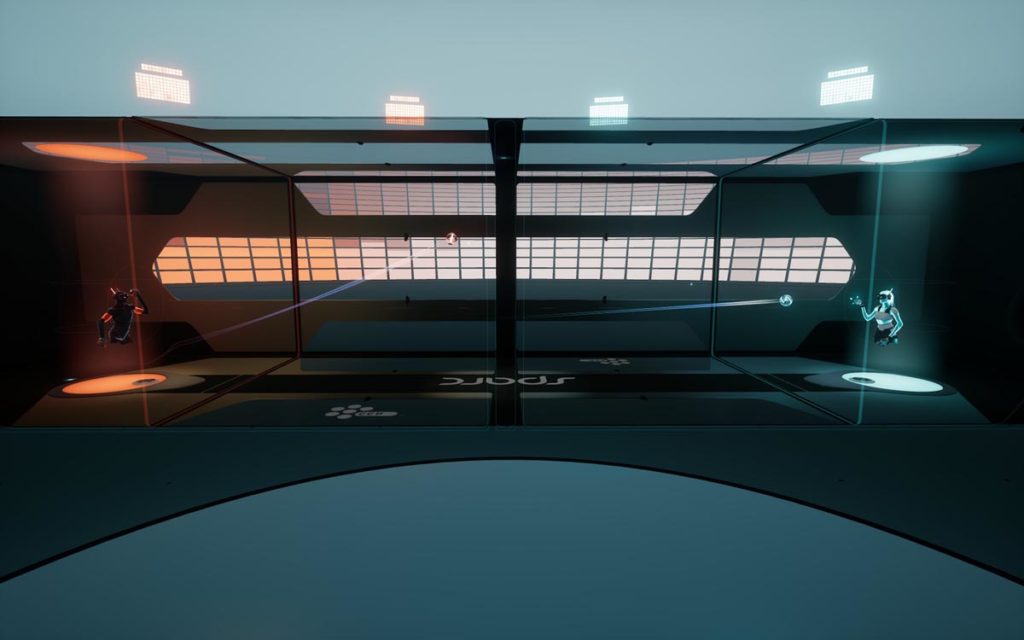 The arena, it may look simple, but the gameplay is anything but!

Currently, most people online are new and not that good (myself included), but I don’t think it will take too long for the elite to separate themselves from the pack.  As it stands now, this is a PSVR exclusive so, for those looking to play often, your best bet would be to join an online community and get in on some organized matches, instead of relying on random matchups, at least for now.  The online community for these types of games are devoted, but the population is light, so depending on what time of day you go on, you may be left in the lobby alone with your thoughts.  As this is a relatively early review, with luck the games population will explode and this will become a non-issue.  Thankfully, this is one of the few PSVR online games that offers chat so you can mouth off to your opponents all you want!

Online consists of 3 modes, the 1st being Brawl Basic, which uses the standard rules mentioned above with the winner being the person who scored the most points in a 3-minute match and an Aim Assist set to medium.  Secondly is Brawl Advanced which is a best of 3 rounds, with no time limits and a lower aim assist.  Lastly is Experimental which alters the court geometry by tilting the stage making for some way more dramatic gameplay.  The different modes are a nice change of pace.  The most annoying thing about the multiplayer is, after you pick your mode, you get put into a room where you can than join queue.  The problem with this is you are stuck waiting for the current match to finish, which can take 1 minute or much, much more depending on the game.  This wouldn’t be so bad if you could go back and pick and a new room, which you can’t.  I mean you can, but you have to quit out of multiplayer and go back into multiplayer to find a new room.  It’s frustrating when all you want to do is play and you are stuck waiting way more than necessary. 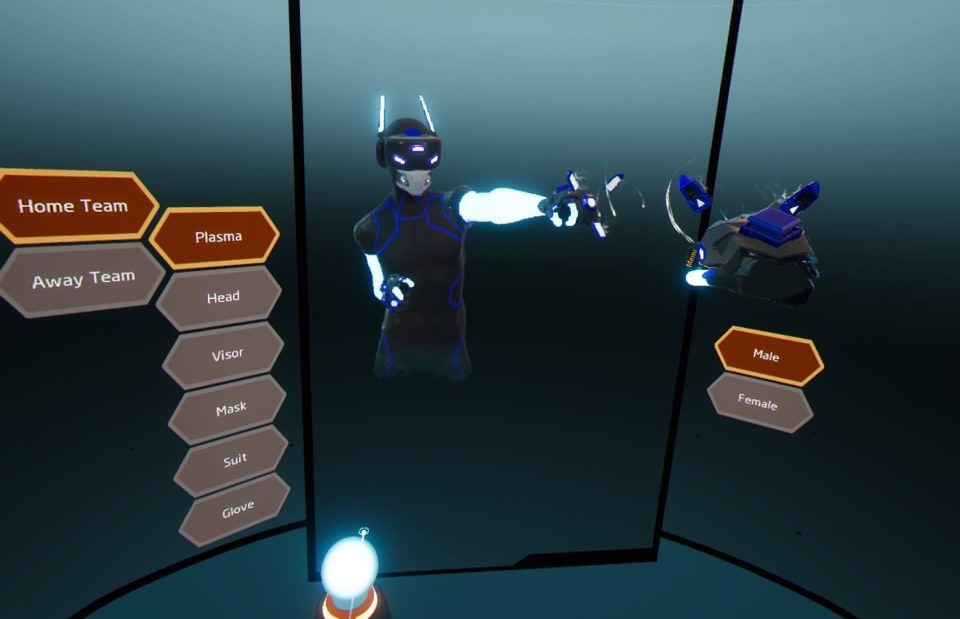 Customize your champion, than strike a pose in the mirror!

Only time will tell if this becomes a staple for online play, or just another forgotten VR title, and it shouldn’t be forgotten.  While I don’t think it’s a game you can play for hours at a time, it is game that is quite addicting and will have many people, myself included, coming back again and again for a round or 2(or 3 or 4), just see how they stack up.  The competitive, one-on-one nature of this game makes it feel very fair and even when I got schooled (and that happened more than once) I recognized that it was my own shortcomings that caused my downfall.  As they say, practice makes perfect and this is the type of game the exemplifies that form of logic.

What would I pay? $30 is perfect.  The only major caveat being that it’s almost a strictly multiplayer affair.  That said, it’s fun, challenging and rewarding with some great tracking and, most importantly, competitive gameplay!

CCP Games provided theVRgrid.com with a review copy for this game and, regardless of this review, we thank them for that!