This review has been updated on Nov 26, 2021 to reflect the release of the PlayStation VR version.

Windlands was released shortly after the launch of the Rift and Vive headsets all the way back in 2016 and arrived on the PlayStation VR as a launch title,  establishing itself as one of the go-to VR games thanks in large part to its unique grappling mechanics that had you cruising through the air at crazy speeds.  Windlands 2 is a direct follow-up to that game, though you don’t need to play the first to enjoy this sequel, which includes the same navigation mechanics and introduces a more in-depth campaign and some combat to spice things up. 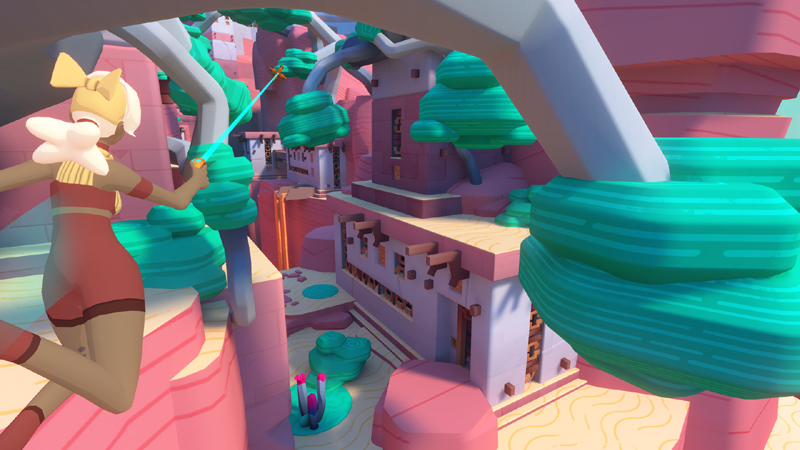 Motion/Move controllers are supported as well as the DS4 controllers for the PSVR with this as this playing  by-and-large like a mixture of Bionic Commando and Spiderman with both of your hands being armed with grapple guns.  You can only latch on to certain types of surfaces (typically green) and when those are in range of your guns, your reticles indicate where you will fire and turn blue.  Like its predecessor, the controls here are intentionally floaty and based largely around momentum and as you grapple onto a surface, you are immediately propelled toward it.  The key to quickly traversing the stages is to chain together grapples, constantly moving up or down always looking for that next piece of terrain you can grab or safe spot you can land on to reassess you next move.  You can also spawn an energy bow and arrow needed for the combat and occasional target practice sections.  This mechanic works great (on PC) and when you draw your arrow back a small dot appears indicating the path of the bolt.  PSVR users will struggle balancing this mechanic as forward and backward movement is handled by the Move and square buttons with turning handled by X & O on the off controller.  The direction of your movement is mapped to either a controller or direction you are facing making for a slightly less than ideal mix of movement and combat that can be tough to balance during the harder encounters.  Spawning the bow while aiming, swinging or moving and turning just becomes incredibly cumbersome on the PSVR and while I did get used to it, it never felt comfortable compared to the PC version, especially when you factor in the less than ideal tracking for the PSVR.  Encounters really are secondary to the exploration in here with later stages challenging you to find the right path to a goal, occasionally fighting a smaller bot with each stage ending in a massive boss battle. 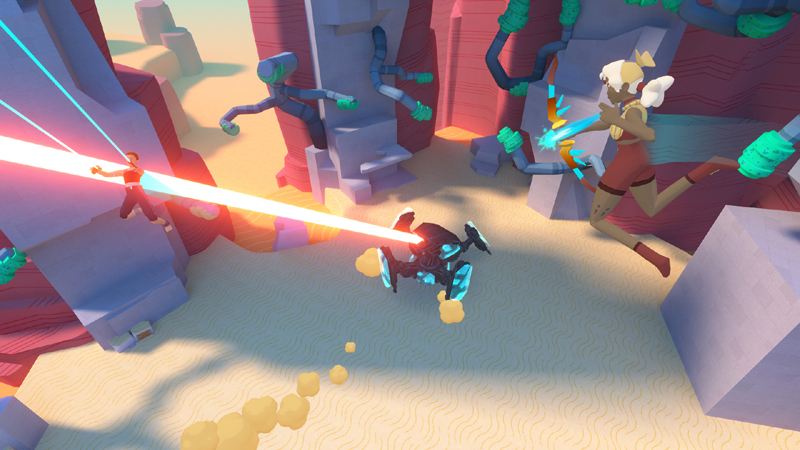 The campaign or any select level can be played in single player or multiplayer with the game getting substantially easier with others. If one of you bypasses a particularly difficult area, the rest of the players can spawn off of that person making it a little easier to get through the stages. Boss battles are much easier as the enemies have trouble focusing on multiple targets allowing for multiple players to quickly pick apart the bad guys. A few other modes are also available including speed run challenges and races with leaderboards along with a few others like ‘Hook Anything’ or ‘one life’ which offer a few different ways to play through the campaign.

Like its predecessor, Windlands 2 utilizes a very simple cell-shaded look that is striking. Everything and everyone have simplistic color tones and lacking textures, making it look very cartoonish but friendly. What this allows the game to showcase though is an amazing draw distance that lets you see to the horizon. The world and stages are quite large with some requiring you to constantly climb up and up while others have you skirting the ground below, forcing you to be very careful as touching sand results in instant death and a respawn at the last checkpoint. While the world is large, it feels very empty at times as much of the levels are static and don’t feel populated by anything but yourself. Even if the visual style doesn’t appeal to your eyeballs, when you are flying and scrambling to grapple to the next objective, it’s absolutely thrilling at top speeds as you narrowly escape death by catching a point you thought was just out of reach or mad-circling bosses as they unleash all manner of attacks. The robotic enemies you face carry more detail then just about everything else in the game, especially the bosses, but given the scope and overall polish I thoroughly enjoyed the presentation.

There is much more story then in the 1st one including fully narrated characters and a big bad you need to defeat. The voice work is a little over the top but fits the cartoonish look of the game with every character being overly exuberant and excited, but it works. The music in Windlands 2 is top quality offering both epic and emotional tunes when they fit as well as some great ambient and chill music when you are just whipping around. 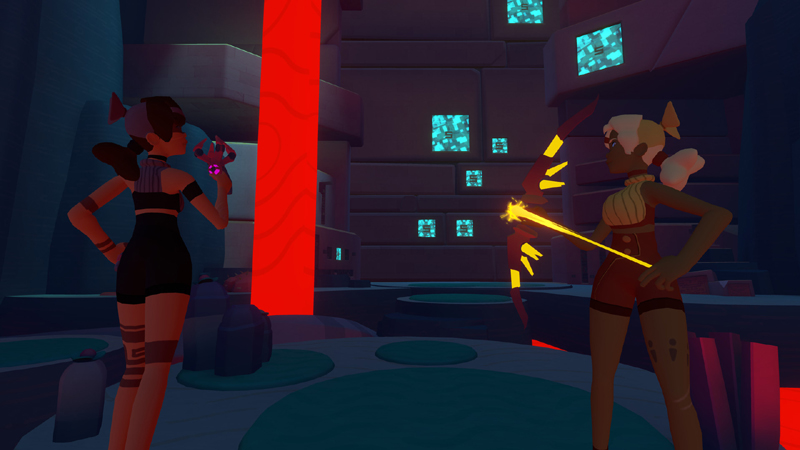 These sections are actually quite difficult.

There really isn’t too much to complain out here with my largest issue being the feeling of repetition that kicks in during longer plays  The campaign consists entirely of fetch or kill quests tasking you with navigating around smaller sections (when compared to the larger world), looking for a specific number of collectibles or getting to a waypoint a km away to defeat an enemy.  As you progress through the campaign the stages do get more difficult with grapple points being further apart or covered in spikes forcing quick reactions lest you fall or hit those spikes and die, causing a respawn back to the last checkpoint, which are scattered all throughout the world.  These later missions can be incredibly frustrating as, at certain points, I was falling to my death over and over to the point of madness until I had that one good run that got me to the next checkpoint.  Those frustrating moments are balanced out by the satisfaction of nailing those seemingly impossible flight paths.  The checkpoint system is one the most forgiving of any game as any progress you made, whether it’s finding items, destroying enemies or removing a bosses shields 1 by 1, is saved, allowing any mission to be beaten while dying again and again.  Given the nature of the game and how easy it can be to miss a grapple point or jump, I totally understand why this system is in place, but it does remove much of the danger in any encounter as you can just respawn and slowly whittle down your foes.  Multiple difficulties are available which affect how much damage you can take and dish out with medium offering a decent amount of challenge without being to intense.  While longer sessions did feel repetitious, every time I hopped in for a quick go it was exhilarating to swing around in this incredible world. 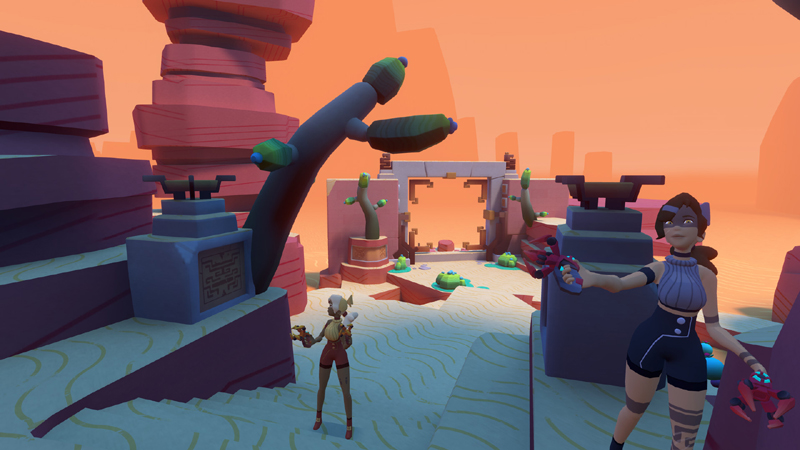 Despite my few misgivings, Windlands 2 is still a blast to play alone or with some friends.  Covering vast distances in such a short time as you whip past floating islands all while combating a variety of robots through a fully realized campaign is a ton of fun.  If you enjoyed the first Windlands title, this is all that game was and much more offering thrills you just couldn’t experience outside of VR.  If you are in the mood for an explorative adventure, this is great!

What would I pay? The full price of $30 is more then fair.  The campaign should take around 6 hours or so and with the multiplayer aspect and other modes available there is a fair bit of content to get through.  As I said, long plays do start to get old but tackle this in a stage by stage basis and that should help alleviate the feeling of sameiness and regardless of that feeling, soaring across the landscapes is both breathtaking and satisfying.

Psytec Games provided codes for this title and, regardless of this review, we thank them for that!