Feeling the urge to go to a sports bar, but hate walking, driving or getting proper representation of the many games you probably won’t find in a sports bar? Than this is the game for you!  As a PSVR launch title, it’s games like these that could easily put a sour taste in VR users mouths.  It’s not entirely broken but for how much content is here that works , it may as well be. 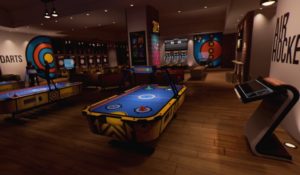 The bar itself looks pretty good!

The tutorial level puts you in a small room with a few recreational activities which I will cover individually below.  Once you enter the larger bar the games presentation ramps up with a very large room full of games and people.  The scenery looks fine and does a very good job of capturing that sports pub feel; with TV monitors playing some looping vids and patrons seemingly interacting with each other.  It all works, though the people lack a fair amount of detail and animations.  For the most part the visuals here do the job, as does the audio with typical bar sounds and an inoffensive soundtrack.

There are options to pick up and throw objects as well as magically create new ones you unlock through gameplay(like ping pong paddles and a pong gun) but the mechanics here will have you struggling to manipulate objects.  The other more “interactive” objects serve no real purpose are basically just fluff in case you want to just mess around.  This can drastically affect online play as users can generate multiple objects, taxing the game and causing lag or connection loss.

The games, oh the games.  I first tried Air Hockey and was pleasantly surprised at how well it worked.  They did an amazing job of capturing the feel of air hockey and I don’t think any game could do this better.  Every game here uses the Move controllers and the freedom of movement here is great.

Then there was pool.  I’m not sure if something like this can be translated to 2 separate move controllers, but they tried…and somewhat succeeded.  Choosing your position around the table is easy enough with a little red arrow showing up wherever you want to move, you will have to walk a bit IRL to get that exact angle.  You lock on to the white ball with 1 controller, while adjusting the angle of the cue with another than pulling back on the same controller to make the shot.  It works but it feels complicated and had me wishing I was playing the real thing.  The game also seemed to have trouble tracking the move controllers, often making me hit balls wrong.

Darts were next up and suffered the same issues.  Holding the darts in one hand, grabbing with the other is easy enough, but how you throw them is not natural.  You basically lock your dart into position (so its floating there) and then throw it like you would normally.   What this means that almost every shot can be placed dead center or near too as long as you take the time to line them up.

Other games included are skee ball, it works good but I found it to be a little too sensitive for my throws and more often than not I threw the ball when I tried to roll it.  Shuffle board is here as well but seems to suffer from the same over sensitivity.  Also available is a chess board (in a sports bar?) and a checkers game.  The latter 3 rely solely on the trust system for keeping track of points.   I should mention that the AI here seemed a little tough,even on the easiest setting, so be prepared to lose until you master each game.

Multiplayer is the driving force behind all this and should make all the games better just because you get share the fun (and struggles) with people around you.  However, on my playthroughs lag and glitches plagued my games with items getting stuck in scenery as well borderline unplayable lag on skee ball and air hockey.  Mic support as well seemed to not work more often than not forcing us to mime what we wanted to do with move controllers.  I played a game of checkers with a dude when a 3rd guy came along and reset the board.  Not the games fault, but unless you start a private game, douchery could and probably will be present.  Almost every game I was involved in devolved in us battling with game breaking lag or people just interfering in games any way they could.  It’s a case of more frustration than fun. 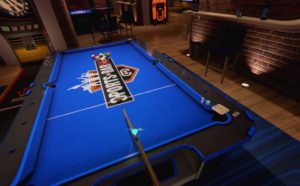 Pools plays alright, but I would rather play the real thing!

Overall most games just feel like poor VR realizations of the real thing and with the few that do work good, it’s a hard sell when you consider the price for the full package and the busted nature of multiplayer.  If server errors and mic glitches were fixed there would still be fun here, simply because it’s a fair playing field when it comes to the poor control schemes.  Suffice it to say this is a collection of mini-games that is probably best left alone.

What would I pay?  $5US. Really skee ball and Air hockey are the only long lasting attractions.  And with multiplayer plagued with lag and mic problems there is very little long term fun here.