I am not a football/soccer fan.  I mean, I played it when I was a kid, but it never really appealed to me as past time or sport to devote any time too.  When I became aware of VRFC I really couldn’t quite grasp how football could be translated adequately to this generation of VR headsets.  It’s called ‘FOOT’ ball for a reason and anyone with a PSVR knows that leg tracking isn’t possible with the limited tracking offered by the PSVR.  Thankfully, the team behind VRFC, Cherry Pop Games, has some experience developing VR games with Hustle Kings and Sports Bar and made what may just be the best way to implement a kicking sport into VR. 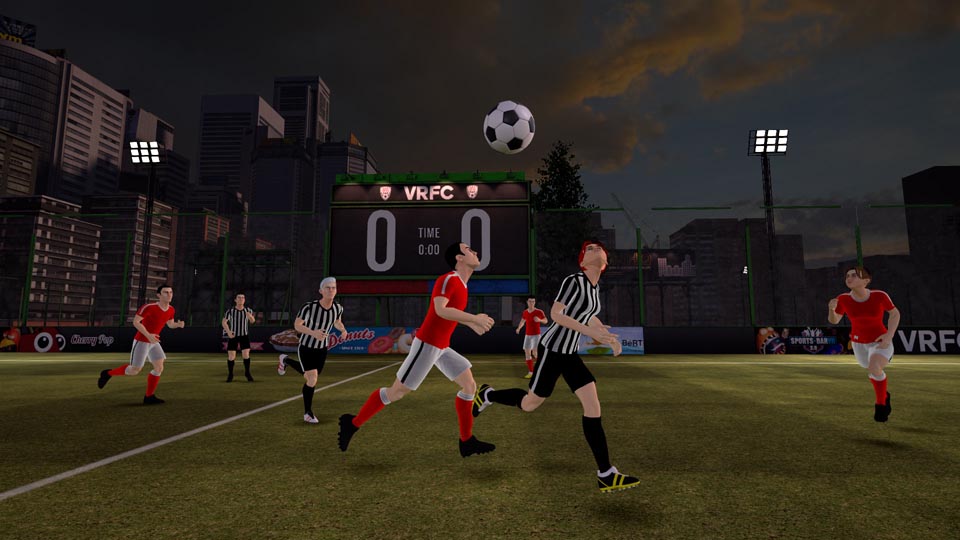 It’s soccer in VR…and it works!

So how does football work in VR?  You are going to need 2 Move controllers and for those familiar with Sprint Vector, VRFC uses a similar base mechanic; swinging your arms as if you were running to propel you forward.  Looking down reveals 2 feet, which are also mapped to the controllers.  From here you can choose a variety of comfort options to best suit the play and I recommend going through and fine tuning these to your liking.  Turning left and right has been assigned to 2 buttons, you can sprint faster by holding down both triggers, which drains your stamina, or move backwards by pressing both Move buttons as well strafing and centering options to keep you in the direction you want to go.  Holding the trigger on 1 controller will give that foot kicking power to help blast it past the AI goalie.  It’s as complicated as it sounds and in my initial time in the game, I played the tutorial TWICE, something I don’t think I’ve ever done in any game before this one.  But as I played, everything started to click.  I would still say I’m terrible a the game, but I noticed dramatic improvement in my ‘footwork’ after just a few games and found myself chasing and kicking the ball with surprising consistency. 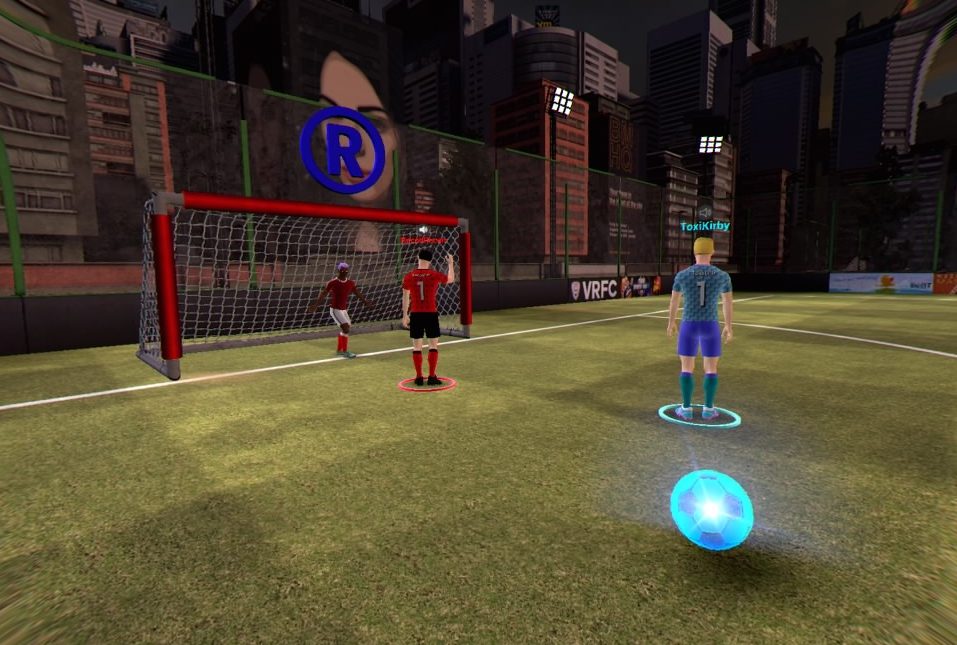 VRFC is a smaller title and it shows in the visuals.  They don’t look bad at all, just limited.  There is only 1 field to play on which seems to be a city park surrounded by tall buildings.  Players look pretty good and the devs opted for full body players which I thought would have resulted in some very janky animations, but actually look great and move naturally, albeit maybe a tad stiff.  The field does look good enough will billboards surrounding it and some decent looking grass at your feet.  Like I said, it’s not the most amazing looking VR game, but it delivers where it needs to in the visual department and compliments the gameplay nicely.  Not much to say on the audio side.  Matches are played in musical silence, except when a goal is scored and the menus are littered with some upbeat tracks to get you in the football playing mood. 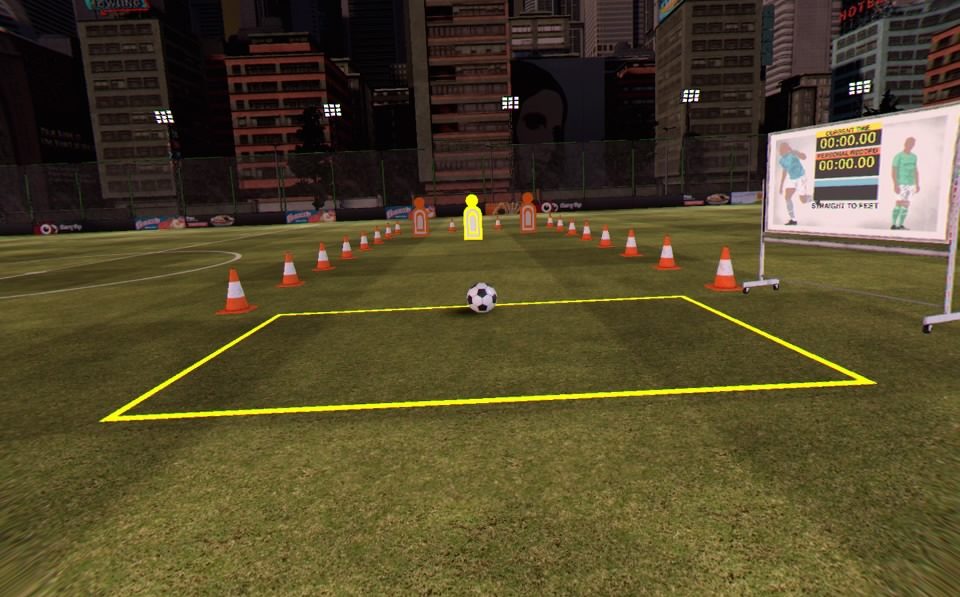 Make sure you go through ALL the tutorials!

The highlight in VRFC is the up to 6 on 6 matches you can have.  Playing online with real people is a blast and like other online physical titles, though you may struggle, it’s comforting to know that everyone else around you is dealing with that same physicality.  I’ve only played with up 5 other players at the time I write this, and it was an absolute blast.  I can’t stress enough to practice a fair bit before you take to the competitive field, but if you are struggling, thanks to full mic support, your teamates will more than likely supply you with some helpful advice.  There is no single player mode currently available other than the practice modes, though the devs have said they are working on bots to fill in empty spaces so playing by yourself may be a future option.  Also, whenever I searched the NA servers, I never found a game but, unsurprisingly, the EU servers seemed to be a little populated with fans of the sport.

For those looking for an exact football sim, you may be disappointed.  The field is surrounded by an invisible wall that keep the ball in bounds and in-play which means there are no throw-ins.  Additionally there aren’t any penalty kicks and though it would seem like an obvious inclusion, you can’t take control of the goal keeper.  I say it again that the control scheme is a little complex and will take a few hours to feel out and get used, but sticking with it is well worth the payoff. Also, as you play you gain experience and level up unlocking new customization options for your avatar, which can be either male or female.  You can change your face ,  skin color and uniform design, making your player feel a little more like your own. 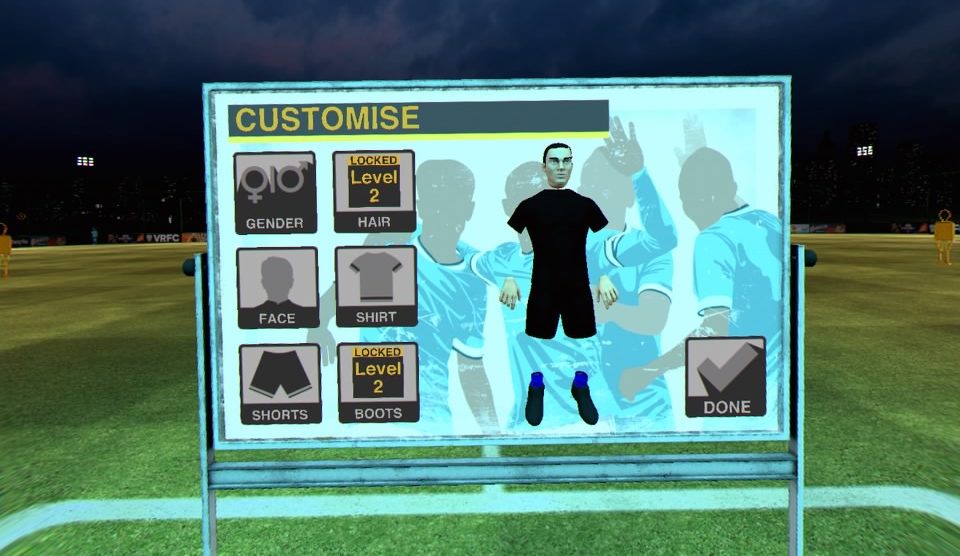 VRFC is a pretty sweet little game. I think fans of football will be pleasantly surprised by this and for those who may be a little more unfamilar the sport, it’s a still a lot of fun.  I didn’t think a  sport sim of this type would work in VR but VRFC shines as a decent representation of the sport while offering loads of replayability thanks to online multiplayer.  If you are looking to get a little sweaty and make some friends, pick this up!

What would I pay? This is easily worth the $20 asking price right now and with future updates coming including facial animations, bots and some content involving the world cup, it’s just more bang for your buck!

Cherry Pop Games provided The VR Grid with a review code for this title and, regardless of this review, we thank them for that!