When a VR sports game nails the physics and emulates that real world activity accurately, it can be an absolute dream to put on a headset and play against others in some physical competition.  I’ve boxed, golfed, snow boarded and played ping pong all in VR with some of the games I’ve played nailing their respective genre while others have left me wanting.  As far as VR goes, I have only played one other Tennis game in Dream Match Tennis for the PSVR, which I enjoyed.  First Person Tennis (terrible name) has been around for awhile now and with it’s official Quest release happening soon, it’s time to see just how close to the real sport it is. 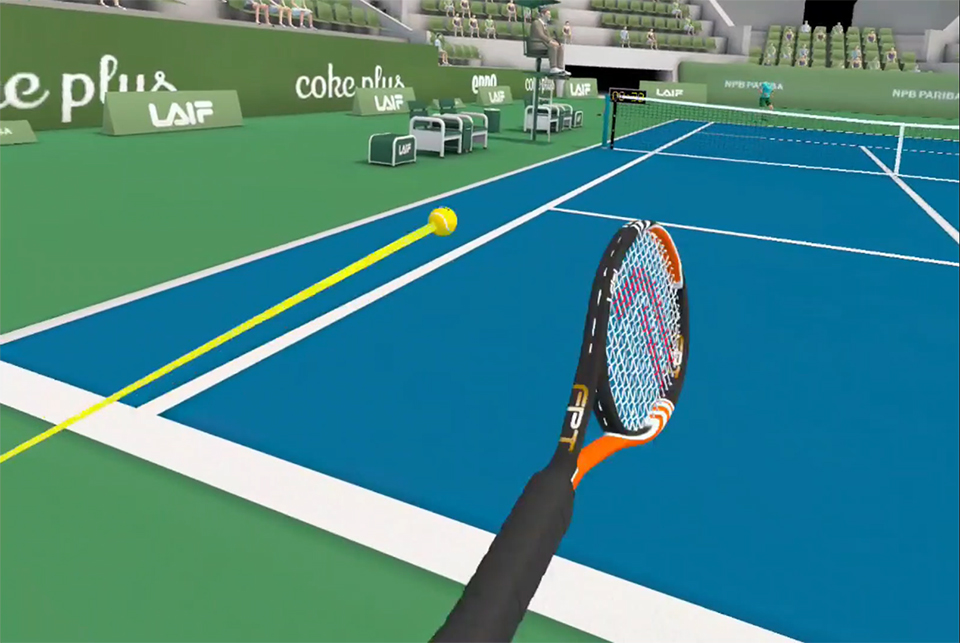 There are a few game options to choose from, including some practice modes as well as various locomotion selections from teleportation, auto run & run on the spot with a few modifiers as to how you might turn.  While each of the options works more or less like they should, I feel like the bulk of the players will use either teleportation or automatic run as they are the easiest and most fun ways to play.  The other play styles offer up unique ways to play but running on the spot to move just felt weird and using the thumbsticks to run around the court was very challenging and I very rarely got myself in the right position to smack the ball.  The 3 game modes offered up are Tour, which takes you through a series of tournaments against various opponents around the world, practice which lets you choose specific swing types you would like to work on & multiplayer which pits you against another human. In any mode you can play with arcade or simulation physics with the difference between them being subtle but noticeable.as the sim physics make the game a little more challenging while arcade offers up more of an aim-assist option that seems to adjust the impact of my swings just enough to keep the ball in play while still making me feel like I was making those shots which was awesome!  You can have 3 tournaments going simultaneously with whatever options you want or if you were looking for some online competition, the main menu shows how many players are online so you can join or send an invite for some intense P v P action. 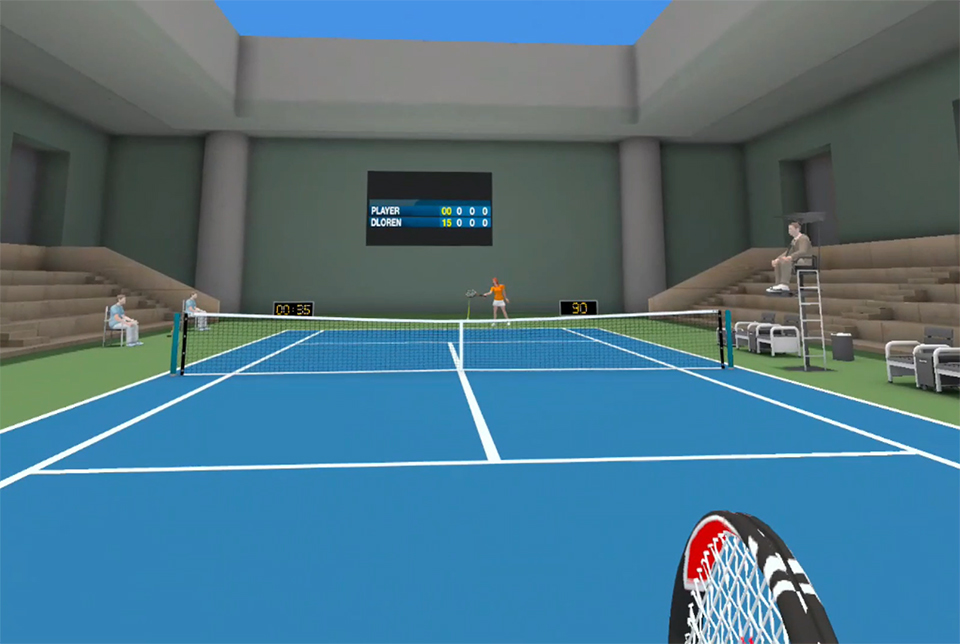 Playing against others is great fun!

The physics in this game are on point and make me feel like I’m playing tennis which awesome but makes the presentation all the more disappointing as this game is not pretty.  The tour takes you around the world though you’ll be confined to the court in small stadiums lightly populated with motionless, low-quality looking people.  Lighting effects are all but absent save for the glare of the sun and getting too close to anything outside of the ball or tennis racket will treat you to low poly textures and motionless everything besides you and your opponent.  The AI opponents move somewhat naturally some of the time but may jerk into a new position or repeat the same moves again and again.  The same can’t be said for your player avatars and while your body is not visible, your opponent’s is with the upper body motions looking alright while the lower body movements look hilarious as the legs drag around the court akin to games like Farpoint or Arizona Sunshine.  I don’t mean to slam the game like I am, I just need anyone interested in this to know that this game is not good looking in almost any sense of that term, but the gameplay and the Quest platform had me forgiving its visual shortcomings as it felt like I was playing tennis and the fact that it emulates real-world physics accurately is impressive.  As far as audio goes, some upbeat music plays during the menus with the matches playing to musical silence while the crowd cheers and the commentators say generic lines about your performance and thankfully, both of those can be turned off as they can get a little annoying.  There is only one type of grunt for male or female opponents in the game so every time your AI opponent takes a swing, it’s the same sound byte again and again though the impact of the ball on the racket and it bouncing on the court sounds fine enough so what’s here works, it just feels quite bare. 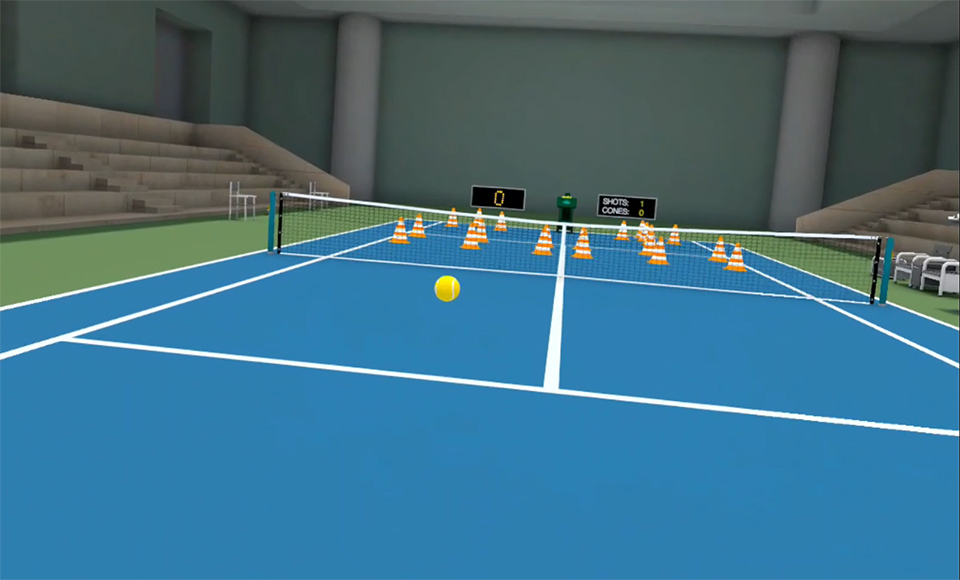 Training modes are available for you to hone your skills.

As lacking as the presentation is in here, I had a lot of fun playing against both the AI and other people.  Online VR games tend to have a hard time gathering a steady fan-base which can easily make the multiplayer dead on arrival and ignored though in playing with FPT, that was anything but the case as there was always a few bodies looking for some action thanks to the cross platform support which was (almost) always awesome.  Playing against the AI is fine and depending on the difficulty can be quite challenging but playing against people is where this shines and whether you want to hop on a for a few minutes or much more, you’ll more than likely find someone to have fun with as you smack the ball back and forth.  Unfortunately, the invite request system could use a little tweaking as, when it was enabled, I was bombarded with requests which pop up and stayed in the middle of my vision until I paused the game to say no but within a minute, the same requester tried again and again.  The training stuff is fun though I admittedly spent very little time practicing there and preferred to learn by playing in actual matches and you can customize your avatar to your liking with various outfits, faces and stats to manage which is something I appreciated. 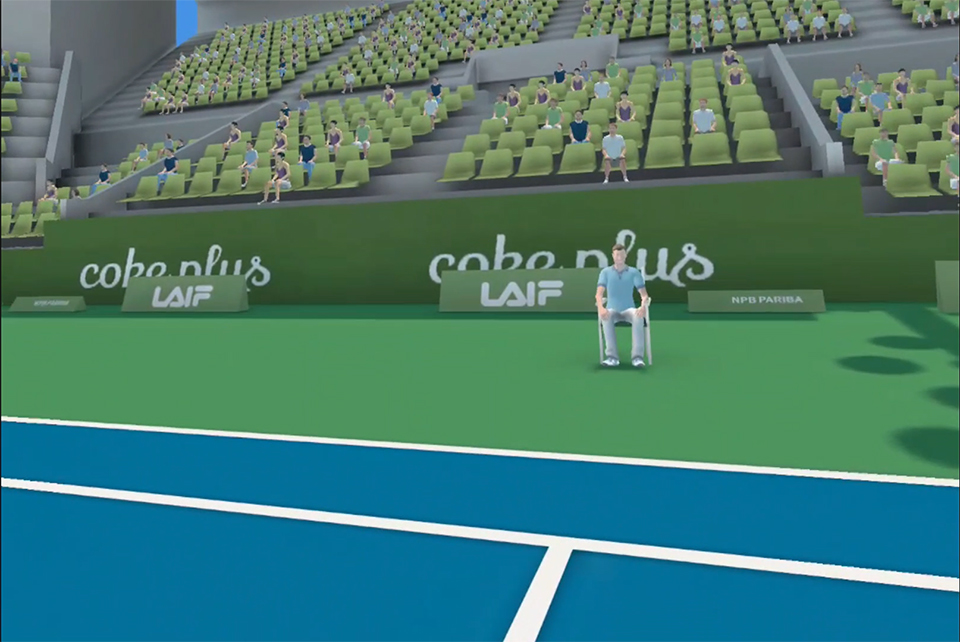 Just focus on the court action as everything else in here looks rough.

At first glance, 1st Person Tennis is easy to look past thanks to it’s less than appealing look, but behind those lacking visuals is a very polished tennis sim that is a ton of fun play.  I’ve praised some ping pong games in the past for their amazing physics and FPT is right their when is comes to that sense of realism while carrying just enough arcade flare to keep even those with the worst skills in the game.  If you are looking to play tennis in VR, then don’t look past FPT as it will surprise you in a good way!

What would I pay?  This is roughly $24 US which, despite my praise, does feel a tad high for what’s here.  If you’re into tennis and you think you might have fun with this, you will and probably won’t regret that cost, but I feel dropping it to $20 will entice those on the fence to take to the virtual courts.

Mikori Games provided The VR Grid with a press code for this title and, regardless of this review, we thank them for that!