Sam & Max are back and if you are wondering who this dynamic duo is, you’ll have to go back a little bit as their last video game was released over 10 years ago and while these 2 might not be the biggest gaming brand out there, they have been around for almost 35 years in comics, Tv shows and numerous video games developing a cult following along the way.  Thanks to the glories of VR, you now play as a recruit for the Freelance police but to join their ranks, you need to get through some training tasks that aren’t quite standard regulation. 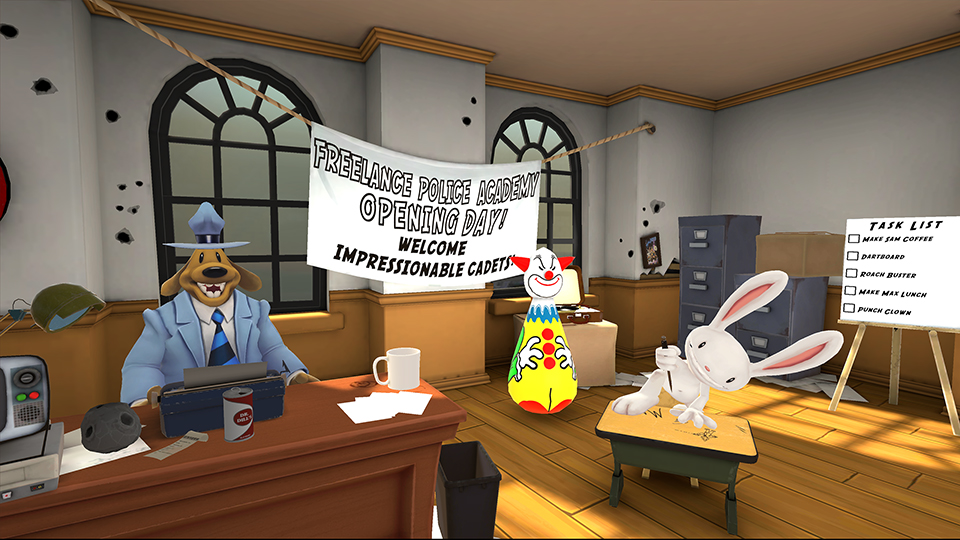 Welcome to your new office!

Controls are of the standards FPS & Job sim type games with a variety of tasks put before you that start off as simple as just grabbing and moving stuff around the room to more complicated jobs like shooting targets, defusing bombs, and running obstacle courses.  All of this can be done using a variety of locomotion options including teleportation or smooth movement with click or smooth turning available as well though at the time of this review, the smooth option is so slow it’s almost unusable.  An opening mission has you firing a rocket launcher at a giant Hydra type creature while dodging its attacks and soon enough, you are recruited by our titular heroes and begin your training at an abandoned Amusement Park formerly owned by a villain from Sam & Max’s past.  There are 9 different training stations and every 3 you complete pushes along the larger story as you join Sam & Max as they respond to next event in the over-arching plot.  This repeats 2 times over though as you play through the training stations, you can revisit them if you want to get a better grade as each one ranks your performance and if you did not so well on one, it may be best to practice as the subsequent mission will involve those tasks you just learned.  Regardless, I never found any of these to be too challenging as most are stock for those that have played any type of VR puzzler before and while they do cover a wide array of mechanics, they never go too in-depth.  You’ll be climbing, shooting, flying hover boards, and grabbing a wide array of objects that will be needed to solve your next obstacle be it shooting something, solving an escape room or sneaking into a night club with the game always throwing you into a 1 whacky situation after another. 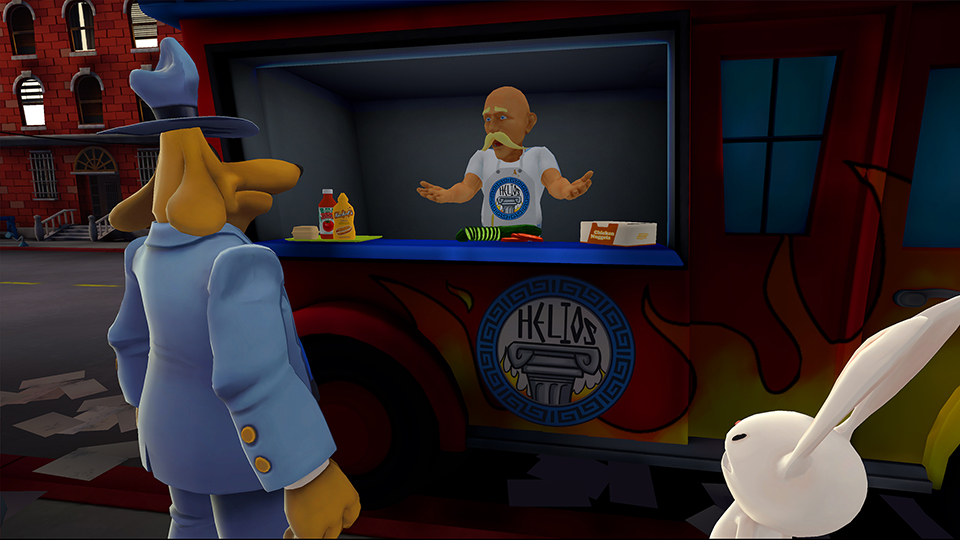 You’ll have to do some detective work to solve this crime!

The focus in ‘This Time It’s Virtual’ is clearly on the character models which animate wonderfully though given that this universe is a cartoon, don’t expect a crazy amount of details as the textures are lacking and typically flat.  Sam and Max will be with you throughout the game, and you’ll visit a wide array of locales from the Freelance Police office, City streets, Convenience Store, as well as the Carnival with each training mission taking place in its own unique setting.  While the variety in the environments is appreciated, they tend to look dull, flat, and boring with the color palette used being a little simplistic and the finer details in the items in these stages being lacking at best.  Items you can touch and grab are typically rendered in higher quality as you can bring those right to your face, but anything statically in place often looks pixelated with very simple low resolution textures.  The art design and resolution of the Quest make the game look fairly crisp, but the overall lack of finer details really makes the game feel empty and a little lifeless.  Pop-In is also an issue though really only occurs in the few larger stages with many items (like fire hydrants) appearing right before my eyes and only a few feet away from me.  I don’t want to say this is a bad looking game as it’s not, but the overall package offered up had me wishing just about everything looked a little better. 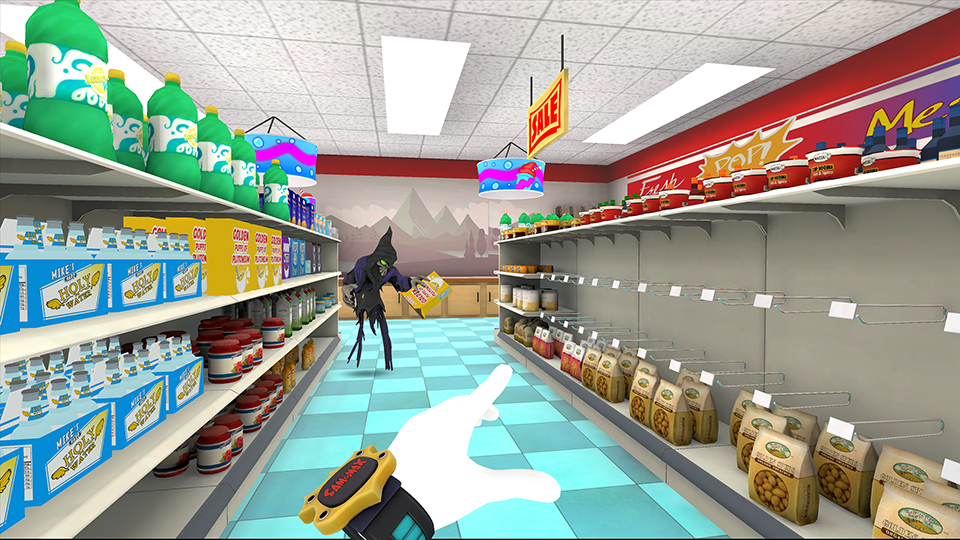 Sam & Max’s largest appeal is the whacky comedy this duo presents and that’s here in spades and maybe it’s just not my style, but I felt most of the jokes landed flat.  Max is easily the most entertaining ‘thing’ in here as his insanity offers up some laughs and while Sam may be his straight-edge counterpart, his “jokes” land flat and it felt more like script reading than natural dialogue though a little research showed me that this is the ‘Sam & Max’ dynamic, so I guess I just don’t get it?!  If you get stuck at a puzzle, Sam continually tells you what to do over and over or when playing some of the lengthier mini-games, Sam & Max will both repeat the same one-liners over and over making the desire to revisit these stages non-existent.  Beyond the script is some repetitive & generic music that kicks in whenever you need to solve a puzzle and quickly wore out it’s welcome with a few stages mixing up the music tracks though nothing in here stood out as special with most of the songs either annoying me or being completely forgettable making the audio package in here weak at best. 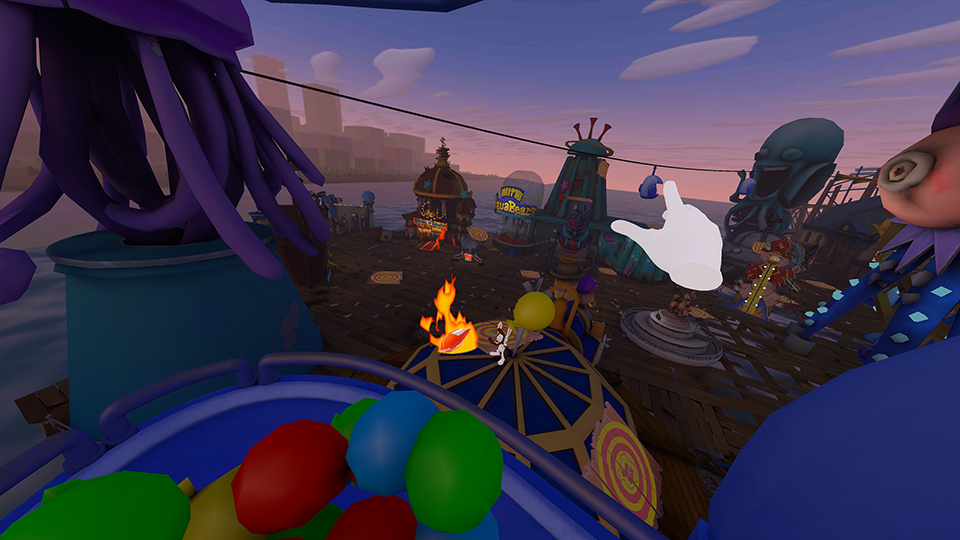 Tossing balloons is fun…until it’s not.

This Time it’s Virtual relies to heavily on the popularity of the franchise, its characters and histories and while I think fans of the series will probably pull more out this than myself, I found most of the game to be a ‘been there, done that’ experience.  It’s part job sim, part shooter and part puzzler and when the puzzle solving works it’s fun and even the other mini games like the shooting gallery and obstacle courses are enjoyable, but other issues in the game really hampered my overall enjoyment as everything in here feels like I’ve already done it before, and in better games.  I also encountered a few glitches in the game which held me up from progressing or worse, forced me to restart that stage from scratch as needed items disappeared or floated off into the distance never to return.  While the story may be the main attraction for most fans, I feel like the developers designed the mini-games to be highly repayable but as leaderboards are only local, you’re left playing with yourself, which as we can all attest too, get’s old after awhile and given that you’ll repeat the same actions during the story missions, it just a question of how many times can you do the same things over and over and keep coming back to it.  For me, I was one and done as I had gotten an A rating in a majority of the practice events on my 1st go with the ones I did poorly only usually relying on throwing stuff, which in VR almost never works properly. 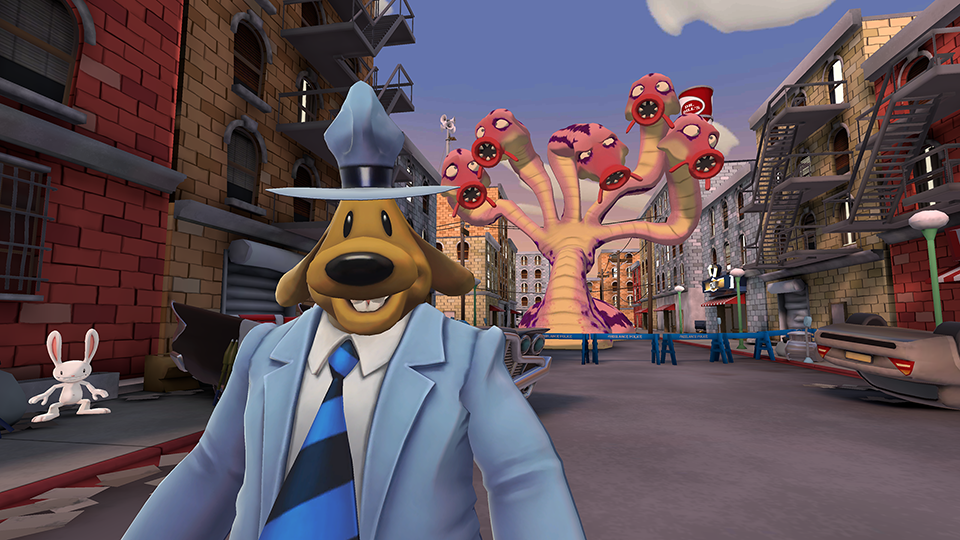 There are some crazy encounters in here.

Sam & Max feels like it tried to play things safe while dabbling in a lot of game genres at once making for an overly simplified and disjointed campaign stitched together by characters and a story that I just didn’t care for.  Fans of the show, comics or previous games may be ecstatic to be so close to these 2 cult heroes, but as a guy relatively new to the franchise, I really have no idea what the fuss is about.

What would I pay? The $29.99 price tag on this is too high for what’s here.  Most of the mini-games and puzzles are serviceable at best but with a 2-to-3-hour campaign riddled with scenarios & jokes that don’t land and a story that didn’t intrigue me one bit, $15 is as high as I would go if you were new to this franchise.

Happy Giant provided The VR Grid with a press code for this title and, regardless of this review, we thank them for that!