What mobile VR gaming lacks is full motion, first person VR games.  That’s not say they don’t exist, but they are so few and rarely meet expectations that they are quickly forgotten.  ‘Onyx’ is Atlatl’s answer to this dilemma by offering up ‘full control’ in a fantasy realm littered with puzzles and mysteries to solve.  What’s presented is an impressive puzzler that does little in holding your hand and leaves you to your own devices while you try and navigate through a few different stages. 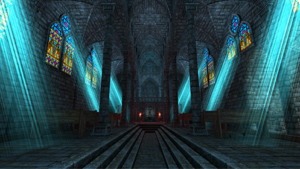 The environments in the game are impressive.

The singular control method offered here is commendable and for me, a first for mobile VR.  Your touchpad controls the direction of travel as well as the pace requiring you to navigate by looking where you want to go.  This means that you are going to have to stand or play in a swivel chair to efficiently navigate the environments.  I really loved the use of the touchpad, but after not to long was annoyed by being forced to play using 360-degree real world turning.  Don’t get me wrong, it took me a few minutes to get used to this method of travel and when I did it felt great, but as a couch gamer I would have appreciated the addition of a click-turn option.  For those that need it there are a few comfort settings here should sim-sickness be a factor in your gaming.

To interact with anything, just point your controller at what you want to lift/move/push and press the touch pad button in.  There aren’t any enemies to worry about so the core of this game is finding and interacting with puzzle specific items and moving or manipulating them to solve those obstacles.  I did run into difficulties when trying to turn objects and ended up having to stretch really high, or move my hand in ways that didn’t correspond with movements in game, but this only occurs a few times during the game.

‘Onyx’ looks really good and I was immediately impressed with the level of detail that went into the stage design.  Castle and cave walls are rendered in some of the highest fidelity I have seen in mobile VR with the smaller details like book shelves, pictures and other items all making these places seem real and lived in.  You are essentially left alone throughout the game and the reasons for this, along with the story, is told through a couple of scrolls found in your searches.  It’s not the most complex story, but it gets the job done and explains the who, what, where and why in succinct fashion. 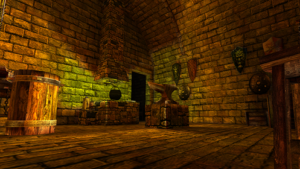 Time to sharpen up on those black smith skills

I was less impressed with the audio if only for the lack of it.  By my count, only 2 songs play during the game and 1 of them you here way more than the other.  It’s a frumpy, plodding tune that has a very high quality to it, but just took me out of the game a bit as imagined myself and a large bumbling oaf stumbling around the castle…that’s just the image the music put in my head.   The sound effects are serviceable with the few things that make noise making the appropriate sound.  Your footsteps never change either so whether you are walking on stone floor, carpet or in a cave, it always sounds like you are taking careful steps on cement.  These issues are really minor when matched up with the gameplay, but stuck with me through my entire play so I thought it was worth mentioning.

The puzzles here range from the simplistic to the fantastic and I love that the game didn’t hold my hand in any way.  You can only interact with select objects in the game, which I found to be the biggest clue in solving the puzzles.  If you find a handle, you better believe your next task is the search out where it fits, same goes for pressing buttons or turning cranks.  With this design, the game plays out in a linear and simple fashion.  Later puzzles force you think a little outside the box as you must match letters to numbers to solve a riddle, change light beam colors, play the final move in a game of chess and a few more very different enigmas.  The variety in the puzzles kept me entertained throughout my 2-hourish playthrough and in all truth the game will probably last most people an hour or 2 longer than that.  I’m not bragging, but my puzzle solving skills are solid and a few lucky guesses on 1 or 2 of the puzzles streamlined the game or me.  That said, when I was forced to just stop and analyze a situation for a few minutes, the reward for coming to the conclusion on my own was awesome and totally validates the lack of assistance offered here.

In these caverns, the scale used is impressive

For those looking to challenge their brains, this will do exactly that and the added First-person free motion exploration mechanics are the icing on the cakes.  It’s not perfect by any means but the variety and challenge in the puzzles makes this a unique puzzler sure to entertain you for hours.

What would I pay? $6 is fine.  There is a fair bit of content here and though there is no reason to return after completing it, it’s fun while it lasts!

Atlatl provided the VR Grid with a review code for this game and, regardless of this review, we thank them for that!