VR has been a breath of fresh air when it comes to reimagining genres from a much more interactive perspective with puzzle games arguably seeing some of the most creative ways to use the medium.  One of the most unique uses of VR comes from games like Transpose, Maskmaker and now The Last Clockwinder, all of which require you to work with past and alternate versions of yourself in a VR puzzle sub-genre I am coining as ‘Clonelike’.  The Last Clockwinder has you playing as a young woman named Jewels who must try to restore life to an ancient tree using robot clones who record and mimic your actions, performing simple tasks, chained together for some impressive results. 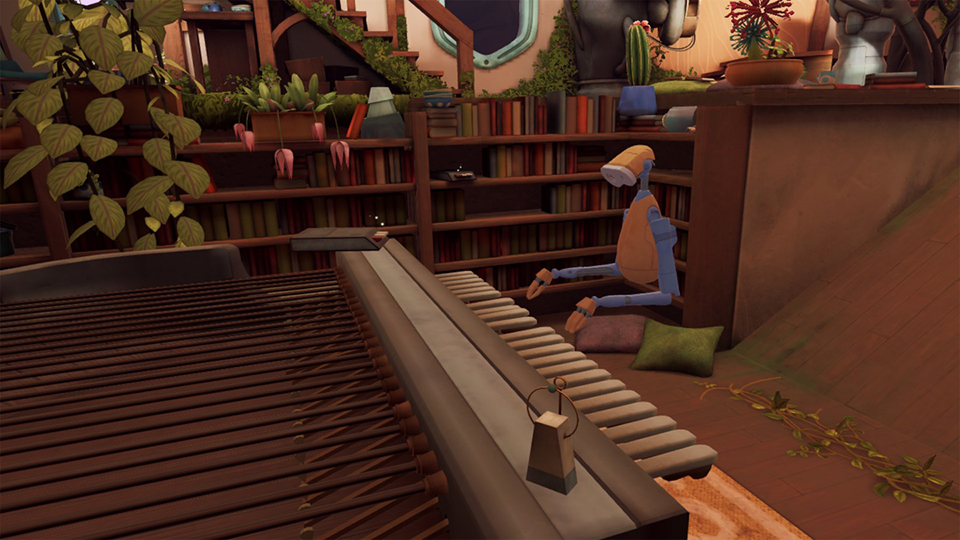 It’s lonely in the tree…good thing you can literally make friends.

You’ll move about the tree using standard, restrictive VR controls as only teleport and click-turning are available though a smooth locomotion option of some type is planned to release shortly after launch though you can adjust your height for seated or standing play.  Disappointing locomotion choices aside, the game is actually very small as you never leave the single room you find yourself in, but instead place a marker on a nearby globe and pull a lever to bring that room to you with each puzzle disappearing to the depths below while the next puzzle rises up in its place.  You used to live in this tree back in your childhood and are here to see what has happened to your former mentor Edea, who has disappeared and left the tree in some disarray.  Recordings from the past bring forward memories long forgotten and as you solve puzzles and unlock more rooms, more of the narrative is told.  Each room will typically have you harvesting 1 of 5 fruits in their own special ways with each fruit requiring different techniques to acquire them.  The 1st simply needs to be picked, while the next requires a knife to cut them off the stem.  The 3rd will explode in your hands if held too long with the 4th kind being little more than a glob of liquid that can’t be touched by hand while the last one wants to float away from you once picked.  Thankfully, you can create robots that mimick your actions and with a simple press of a face button, you can record up to 4 seconds of action.  The key to solving each room is to create multiple clones working in tandem in getting the fruit their respective destinations.  Many of the rooms are setup with lots of robots in mind with each having a chalkboard listing that stages goals regarding the minimum robots you can use for the maximum amount of harvest.  An auto-save feature lets you quit at anytime and allows the player to load exactly where they left off so it’s easy to play for a few minutes and still feel accomplished.  The campaign took me just over 4 hours to complete and while I bet some may be a bit faster than me, I think most people will take around that same amount of time to unlock the mysteries forgotten in this strange tree. 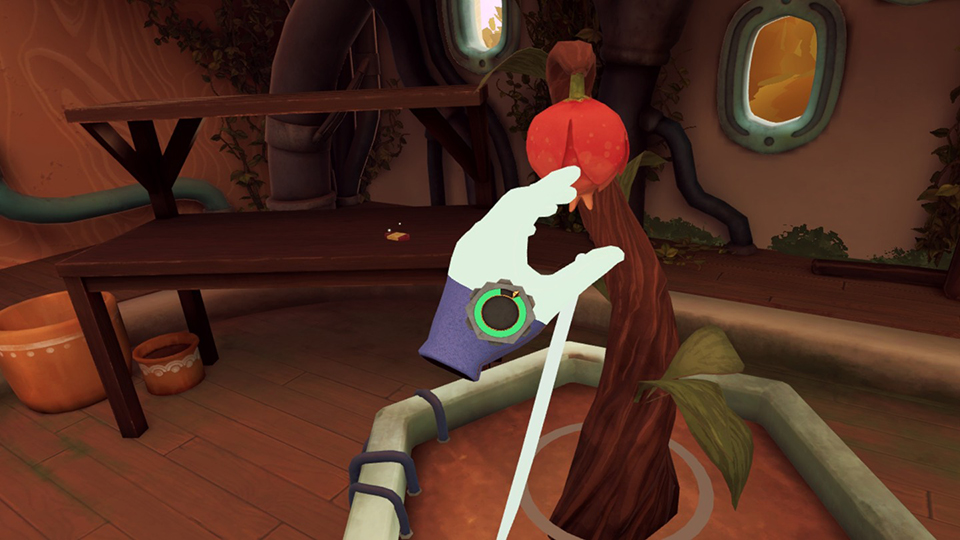 As I said, as far as scale goes, Clockwinder is small with the entirety of this game taking place in 1 room or on the balcony just outside.  That room is cluttered with old shelves, overgrown plants and a large clock, looking much more like a setting in a fantasy world save for the complex machinery also located in here which hints at the games sci-fi roots.  As you unlock more rooms, more surprises await but the star of this show is easily the robots you create.  With a special pair of gloves, you can create a floating robot who mimics your actions for up to 4 seconds or until you stop the recording, whereupon a robot will appear exactly where you are and replay your exact movements.  If you need to get a seed to the opposite side of room, simply pick it, and toss it to the bin.  If that bin is too far, then toss it and create a 2nd robot to catch it and so on and so forth.  As each fruit gets more complicated to harvest and some may require combining various fruits for different harvests, things can get very complex with some rooms taking a fair bit of time to solve. Every time I completed a puzzle, I had to take a step back and marvel and what I had just made as my many machines all went about their tasks, mimicking my movements to near perfection.  That smaller scale also allows for a fair bit of detail in the stage design and while it’s not the best-looking Quest game I have ever seen, it’s not to shabby by any measure and I never took issue with the presentation. 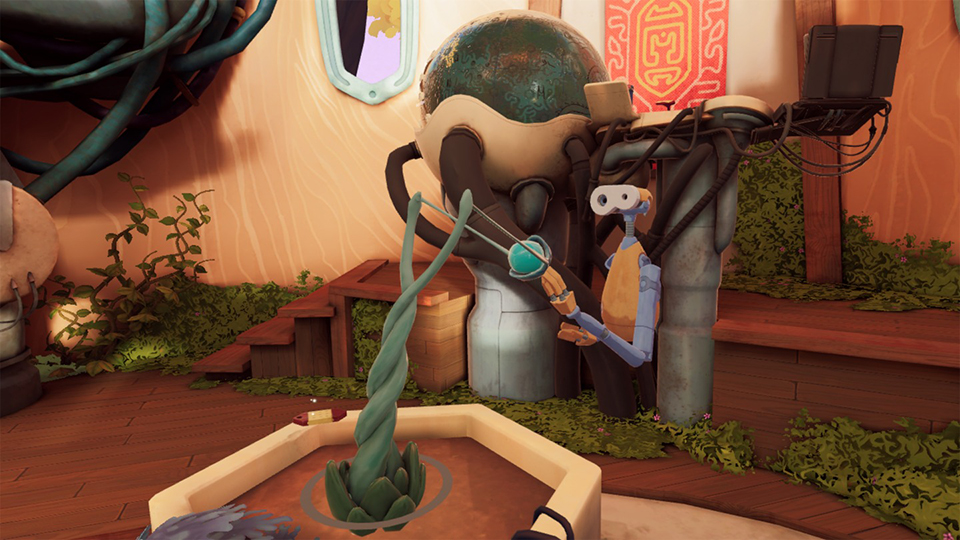 Watching robot repeat your actions is a delight.

The Last Clockwinder is a narrative and emotional tale with great performances from the 3 actors in the game.  The entire story is told through radio communication with your pal Levi or through those old recordings which contains messages from Adea and yourself back when you were just a child.  It’s an engrossing tale and one that I didn’t expect to care about as much as I did so shout out the writers who created an intriguing story with a satisfying conclusion.  The soundtrack matches the action so when solving puzzles, upbeat simple music plays, emulating the repetitious actions of your robots while the story is accentuated by dramatic tunes which hammer home the weight of the past and its affect on Jewels.  Even the sound effects matter as they offer the audio queues of your success as shoots open and suck in fruit while other robots pump levers, cut stems and catch fruit creating a secondary soundtrack made up entirely of your actions. 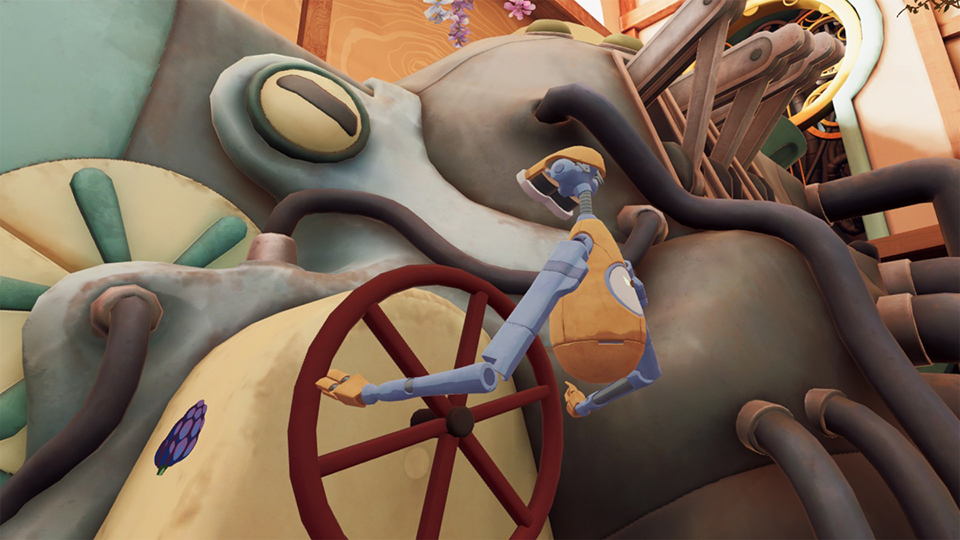 Pulling levers, turning wheels and a host more interactions will be needed to solve the puzzles.

Those 2 games I mentioned earlier are 2 of my favorite puzzle games with The Last Clockwinder easily falling into that category as the clone-like design just makes for incredibly engaging puzzles.  My largest issue is the lacking locomotion options and while it’s clear to me that full locomotion might not work on some of the stages, there is no good reason to not have a smooth turn option, especially when the games geometry interferes with the teleportation reticle needed to move around.  Throughout the game, I was constantly trying to adjust my position in smaller increments than the game wanted to let me, forcing me to move in the real world to get in the exact position I wanted.  That’s not the end of the world, but when a game advertises itself as being able to be played seated, I shouldn’t struggle and fumble as much I did while doing so.  The only other issue is that, on a few occasions, I would leave a room in “perfect” working order only to come back to something out of whack, causing my robots to miss their intended action and ruin that chain of events, forcing me to erase and fix a robot or 2 so my harvest would continue once more.  Outside of those issues is a solid VR puzzler with great amount of depth and story that kept me entertained from beginning to end and while I could honestly play these types of puzzlers forever, when I reached the ending, I was pleasantly satisfied by the entire experience. 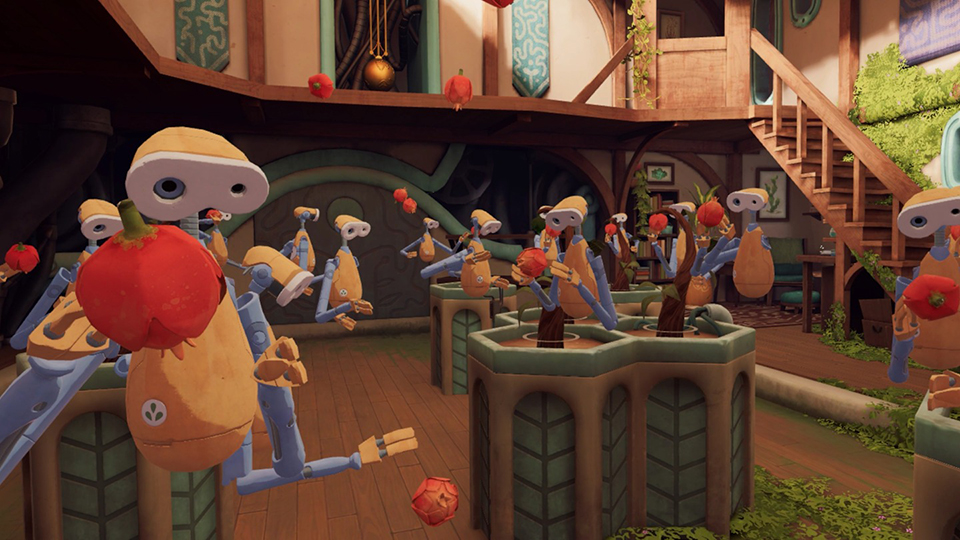 When all your clones are working together, it’s a delight to watch!

The Clonelike genre is a game type I am now officially in love with and as long as I keep getting quality games like this, I don’t see myself ever getting sick of them.  You can solve each puzzle however you want using as few robots as you can to challenge yourself or as many as you want and watching them all work together to complete a task is very rewarding.  Even if you dislike puzzles, I recommend this as it’s unlike your typical VR puzzler and if you do like puzzles than this is a must play, plain and simple.

What would I pay?  This is $25 US, and I am fine with that price.   Solid presentation, interesting story & addicting gameplay…what else can you ask from a any game?!

Cyan Ventures provided The VR Grid with a press code for this title and, regardless of this review, we thank them for that!