This was released a few months and based soley upon appearance I decided to skip this at the time and focus on other titles.  The presentation and “box art” just turned me off it.  Well here we are and I must say I’ve been missing out.  The core of this game is timed puzzles where you choose your path, press start and see if you can make it to the scattered objectives around a small city map. 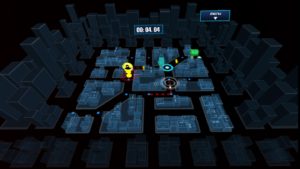 The levels start off simple enough, but don’t be fooled into thinking the game stays easy for long

Basically, you guide different vehicles around a small road map to rob banks, open gates, collect gems and complete other objectives.  There are roughly 60 level spread out over 5 locations ranging from The Bronx to Upper Manhattan.  The games difficulty ramps up as you progress, and for multiple reasons.  Initially you only guide one driver, who must rob a bank each level and avoid the cops, simple right?  A few additions make this more of challenge than you might think.  Robbing a bank takes a few seconds, patrolling cops are constantly around you and power-ups to assist in your heists will be needed to maneuver around the map.  Keep in mind you aren’t controlling the vehicle, merely setting a path and seeing if he will make it to the end or get busted.  Later levels add multiple drivers with different abilities to activate in conjunction with other power-ups, all while keeping an eye on all your vehicles and the patrolling police.

I played this on the Gear VR which unfortunately does not support Bluetooth controllers, unlike every other version of this game which utilizes gamepad controls.  What this means is console and PC owners have the ease of simply pressing buttons and moving joysticks like in any other game.  Abilities on the PSVR are triggered by looking at your in game icon and pressing the appropriate button.  Simple stuff.

Completing each level awards you money and rates you on the a 3 gem point system.  More points means more loot.  The goal is to collect everything you can in a level in the quickest amount of time.  Individual levels will give you abilities for that stage, with your earned money however, you can purchase additional power-ups to assist you in every stage.  This gives you a much-needed advantage, especially in the later levels, which get extremely complicated…in a good way.  This is a game with a simple controls as well as the short levels making replayability and trial and error mechanics fun.  Triggering abilities at the exact right time can be frustrating, but there is a lot of satisfaction to be had when you crush a level in 1 try with nary a cop coming close to you. 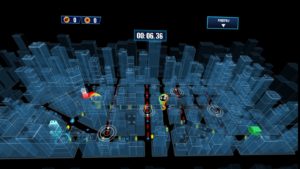 As the game progresses, the challenge increases and so does the fun

This is a game ported to VR, with almost every console and handheld out there having a version of this game on it and some may question the reasons behind the port.  Fat City does not need to be in VR, but that doesn’t detract from the fun you will have.  The visuals, although basic, serve the puzzle aspect of this game perfectly.  Everything is clean with simple shapes denoting buildings and vehicles, but with vibrant colors that add to the experience.  Nothing here is going to come close to blowing you away, but you’ll be to focused on the levels to care about the visuals anyways.  The sound consists mostly of applicable effects and an inoffensive soundtrack; once again nothing stands out or detracts from the game.

This is fun and rewarding.  The multiple paths and choices as well optional abilities ensure that you will have fun challenging your mind.  The levels are so short that replaying to get that perfect score is just easy and fun.  The crazy complex nature of the latter levels is a puzzle solvers dream, and though the game does stack the deck against you, every time you fail feels like your fault, not the games.  The stage designs make it clear that there is a solution and you just need to get better if you can’t beat it.

What would I pay? Personally, $10US.  The content here is great fun, but it does come off as feeling a bit on the lighter side for console release, especially when you can get the same game for other VR headsets ranging in price from $4 to $8(ish).