Budget Cuts has been a ‘must play’ title since its original demo was revealed back in 2016. Flash forward 2 years and we got the games full release on PCVR headsets which included a lengthy and engaging stealth campaign building upon teleportation as the only means of travel. Flash forward 2 more years and this VR classic has made its way to the PlayStation VR headset with some additional content not available on the PC side of things. The premise is simple, you are the last human in an office now dominated by robots with all your living co-workers disappearing under mysterious circumstances and thanks to a gift from a mysterious woman, you decide to make your escape before the company gets rid of you too. 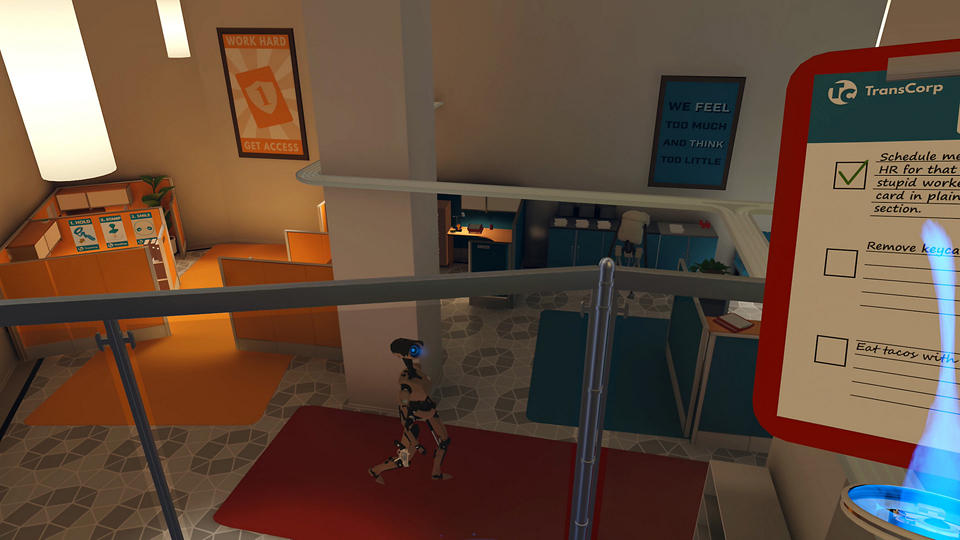 Stay out of sight!

I’m happy to say that this port keeps all the original PC gameplay intact with the caveat on that being that the same limited comfort options on PC are also here as well. Teleportation is the only way you move in Budget Cuts, but that’s thanks to an in-game portal gun so I can forgive that as the entirety of the game is built around that mechanic. Unfortunately, you can only click-turn which is a little annoying in 2020 on such a high-profile game. Regardless, you’re portal gun shoots a small arcing ball before sticking to a floor that you can teleport to so depending on what it hits before the floor, that ball could bounce off the environment in odd ways so pay attention to where it’s going. A second feature of said gun is the ability to use it as a window so shooting it around a corner and bringing it to your face, turning your gun in hand, allows you to have virtual periscope so you can scout any threats nearby though this is a double edged sword because if you can see them, then if they look toward your portal, they can see you too, and shoot at you. Those enemies are armed robots who don’t mess around. If they glance at you, you have a second or two to find cover before they reach alert status and start to hunt you down. You are no defenseless wimp though and can fight back with letter openers and scissors found throughout the campaign. Tossing your blades at them relieves them of their vital fluids as they flounder on the ground trying to recover and get one last shot at you These would be some of the most gruesome deaths I’ve ever seen, except for the fact they are robots…so it’s funny. Every stage has been carefully designed for stealth with small vents, holes in the ceilings, plenty of cover and patrolling foes, giving you plenty of opportunities to travel without being seen though I can assure you, that is much easier said than done. There will be some light puzzle solving in here along with searching for key cards and other items needed to access the next section of the game. 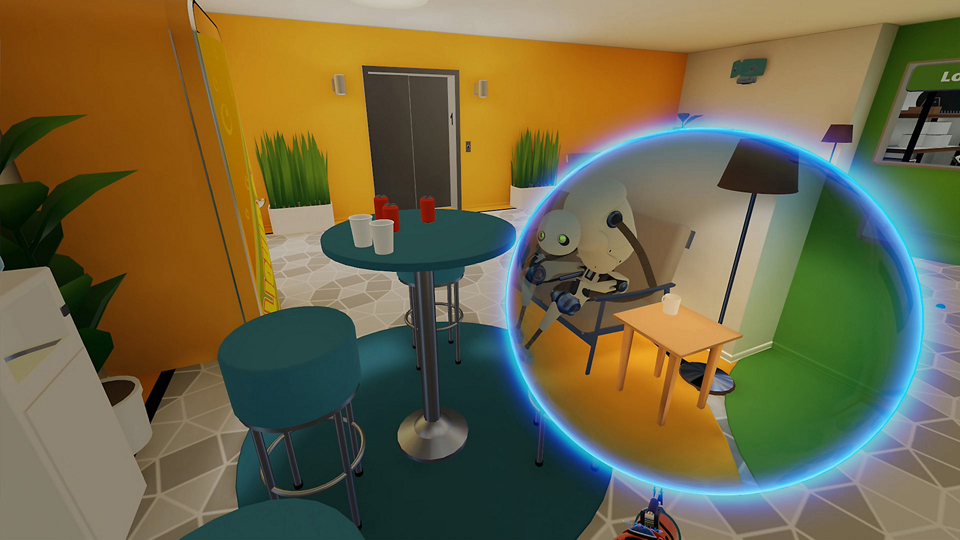 Scout ahead of you with your trusty portal gun!

Budget Cuts is a near perfect port of the PC version with the only noticeable difference being headset resolution and in truth, between my Rift and PSVR, the visual experience is essentially identical. You’ll be travelling through a mostly sterile, robot infested office building with everything in here looking fantastic. The robots animate wonderfully whether it is the more deadly security droids or the more passive office workers who toll about their day as if nothing is awry. The presentation is definitely on the cartoonish side, similar to what we have seen in games like Virtual, Virtual Reality opting for a less is more look that pops in the headset. The levels feel very authentic and are littered with “real” elements like the packed boxes of former employees, dedicated department specific office spaces as well as some more grand surprises found further into the campaign. The portal gun is a treat and works exactly how you would expect and it’s awesome to peer through the window it creates to reveal the surprises lurking nearby. Presentation wise, Budget Cuts delivers a simple, but almost flawless experience that looks great on any headset.

Despite how serious the situation is, Budget Cuts is rife with humor, much of it being delivered by the robots trying to kill you. Sneaking up behind them and listening to their one-liners about how vigilant they are is comedy gold and even the office workers are cheeky in their attempts to simulate loving their jobs. Throughout the campaign you are actually in contact with Winta, who is on your side to help get you out and take down Rex, the head of the company who’s been getting rid of the human workforce. Armed with a pager, she’ll message you a number you need to dial on a fax machine found in the stage whereupon she will update you on the situation and guide your next step and I couldn’t help but be reminded of Morpheus telling Neo how to escape the office building over the phone in the first Matrix film. Rex will come over the loudspeakers quite often and sarcastically bolster the robots to work harder and do a better job of stopping you from escaping. Some light, music might be playing during the campaign, but it mostly falls into the background save for when enemies are alerted to you, whereupon some intense music kicks in until you kill or evade them. The 3D audio is also on point here as well which is wonderful in a game all about stealth. 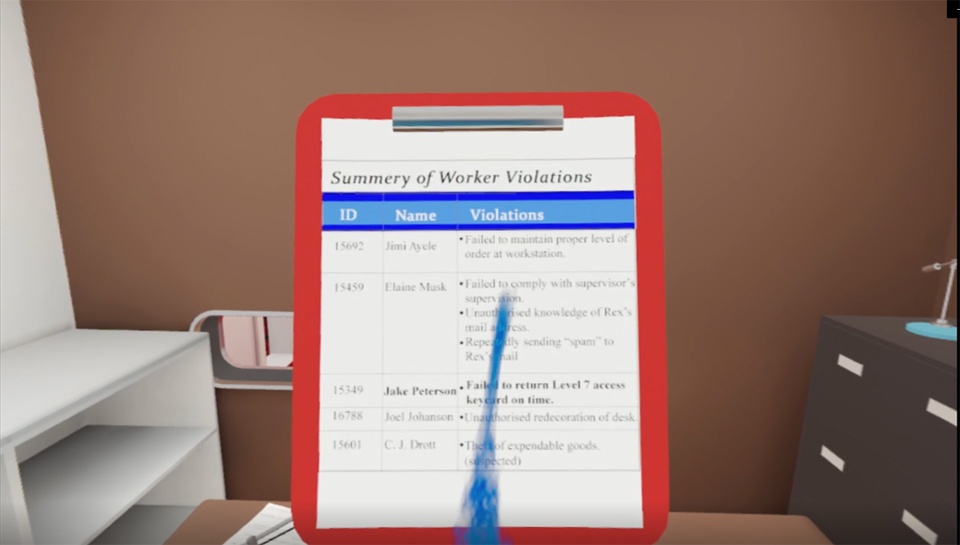 Some notes are just for fun while others provide vital clues for your survival.

Budget Cuts is great, but it still has some issues. Despite the teleportation gun being a key gameplay element, it still feels weird not to be able to walk at all and even the ability to move smoothly, even at a lower speed, would ease up the frustrations of lining yourself up to buttons, doors and other objects just out of reach. Throwing is also dicey in just about any VR game out there and whether you play this on PC or PS, don’t expect to suddenly be tossing knives with any sort of accuracy. If it came down to a fight, I often found myself getting as close as I could to my target before throwing and even still, I found myself missing plenty of times to really make combat a last resort whenever possible. There are 3 difficulty settings in here with easiest being incredibly easy; knives never break, robots have terrible accuracy and are less frequent making stealth much less important. Medium offers much more challenge with stealth being much more prominent with Hard effectively murdering you if you are spotted and is really for those looking for a ton of challenge. Loading screens are annoying and while they aren’t Iron man levels of annoying, they can be as long as 40 seconds and happen frequently enough to cause some frustration at the stoppages in gameplay. Twice in my game I managed to portal outside of the level forcing me to quit and reload, losing a little bit of progress though the auto-save feature works fairly well with my final issue being that the armed robots could sometimes see me though geometry, even through I was clearly out of site which also caused some unfair deaths. 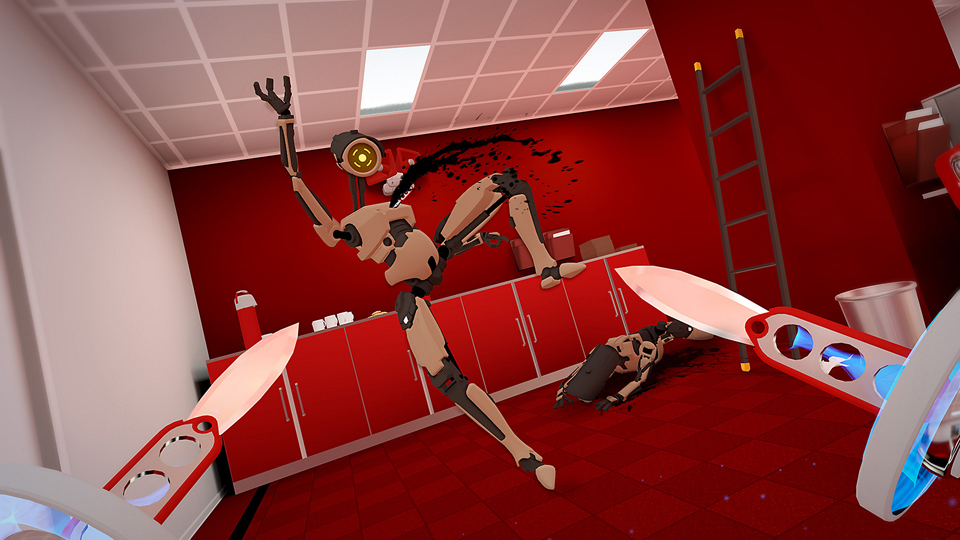 Making them bleed never gets old!

Counter to all those issues is a satisfying game with a campaign that will take anywhere from 5 to 8 hours or more depending upon the difficulty you choose. Scattered in each stage are a host of hidden items as well as notes and documents littered with humor and story, detailing some of the histories of the previous human workforce. Additionally, there is also an arcade which offers up 5 additional missions with ranked leaderboards that are fairly lengthy and challenging in their own right, utilizing all the mechanics found in the game. One of these, the Panopticon level, is exclusive to the PSVR giving us console users a little more reason to pick up this version of the game. Budget Cuts, when it’s all said and done, is a satisfying VR title with tons of entertainment and replay value and now PSVR owners have no reason not to enjoy this light-hearted and challenging stealth adventure.

What would I pay? This is $30 US and worth it. This is a quality title from top to bottom and deserves all the praise it has garnered and is arguably one of the best Stealth games available in VR.

Neat Corporation provided The VR Grid with a press code for this title and, regardless of this review, we thank them for that!