Following on from their successful 2016 escape the room game, Nevrosa Escape, Gexagon VR are back with Nevrosa: Primal Ritual, an action adventure game that riffs on the Lovecraftian setting and moody atmosphere of the original but broadens out the scope considerably. 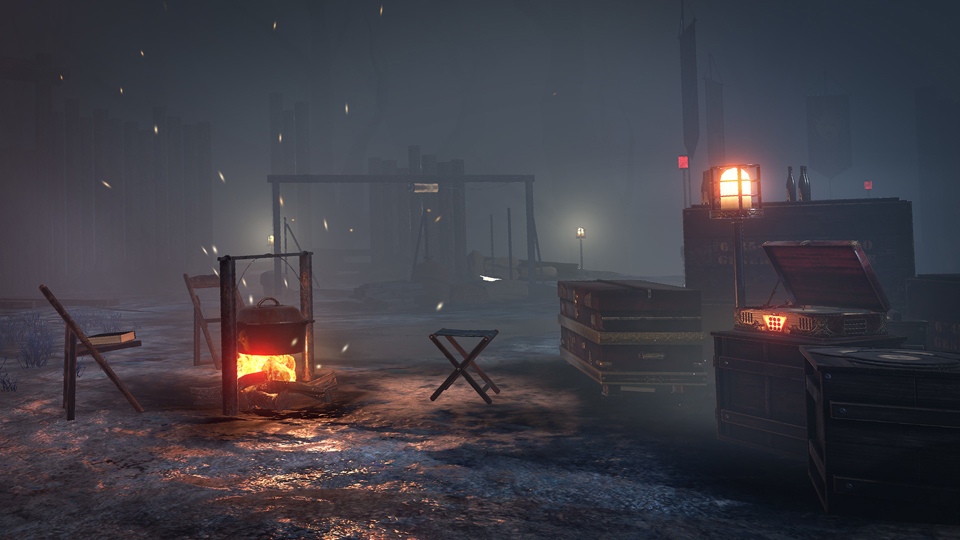 The camp is a great place to hang out.

Nervosa Primal Ritual is the sort of game that I admire more than like. I admire the developers’ ambition here, I really do, but unfortunately the execution of core story and gameplay mechanics just don’t live up to their lofty goals. The story sets you up as William Conway, a scientist who has developed a teleportation machine that has somehow left him stranded in a mysterious land. I say “somehow” as it’s completely unclear how or why you’re trapped there as there’s no background or preamble given in-game as to who you are, where you are or what you’re meant to be doing. I only found out all this information by looking up the game’s Steam page.

Unfortunately, things don’t really improve on the story front as it is solely delivered through cryptic notes left lying around and by your assistant – who’s just a voice – suddenly communicating mission objectives to you via some unexplained means. Both the notes and some of the instructions from your assistant can be very easy to miss as the voiceover blurts out information too quickly or at inopportune moments and the notes just don’t provide enough information. I was incredibly disoriented at the start of the game as I had no context to who or where I was and then suddenly had to fix a teleporting machine, while under attack from genuinely terrifying spider aliens. Then, after fixing the machine, it exploded for no apparent reason and suddenly a talking cube appeared in front of me demanding my blood and that I perform some ritual. I was completely baffled as to what was going on and only started to piece together some loose meaning when I had to replay this section twice after two game breaking bugs resulted in two restarts. 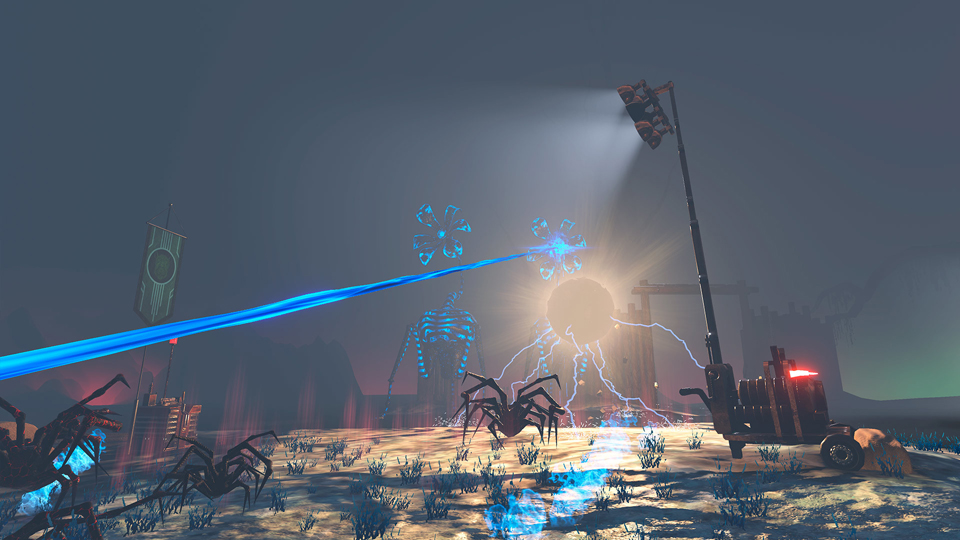 They look more dangerous then they are.

It turns out that the talking cube becomes a companion of sorts and after procuring it the games open up. Essentially, you need to discover and turn on the scientist’s machines, which are dotted across the map, so that you can generate enough power to teleport home (wherever that is!). By killing enemies and discovering shrines you gain points that you can use to upgrade your cube, which can perform basic tasks such as shooting enemies, healing and teleporting you around the map. Clearly the idea here is to move the game into an open world action adventure and while the level of ambition and some of the ideas here are great, the crushing reality is that these parts just don’t coalesce into a fun game as the execution in cores areas feels rushed and key elements are just missing. Firstly, the gunplay is poor. I almost laughed out loud at how insipid and puny my gun felt. It looks and sounds like a pea shooter and there’s very little visual or audio feedback when you hit an enemy – they just sort of disappear. It’s also very difficult to see the trajectory of your bullets, making landing a shot a frustrating exercise. This all results in combat that is simply not fun and the game expects you to take on a lot of enemies to upgrade the cube plus forcing you into combat at certain key parts of the story. After a few demoralising deaths, I actually realised that in most situations you can simply run past enemies rather than engaging them. You completely out pace them (even though your running speed is painfully slow) and so any tension or fear is rapidly replaced by mild annoyance each time you’re forced into an encounter.

Once you start running past these enemies you start to realise that overall there’s not much to this game. The actual explorable area is not that big and it won’t take you long to find the generators and shrines. Even more problematically, once you do get to these areas, there’s nothing to really see or do there. You just turn on a machine by plugging it in or perform the same bloodletting ritual on a shrine. I was pretty surprised by this to be honest. The first Nevrosa game was known for having interesting puzzles but here they’ve been jettisoned completely. Did the developers run out of time? Did the scope of the project become too big to implement them? Either way, it’s a real shame as the lack of variety in the tasks you’re asked to complete really harms the enjoyment of the game. 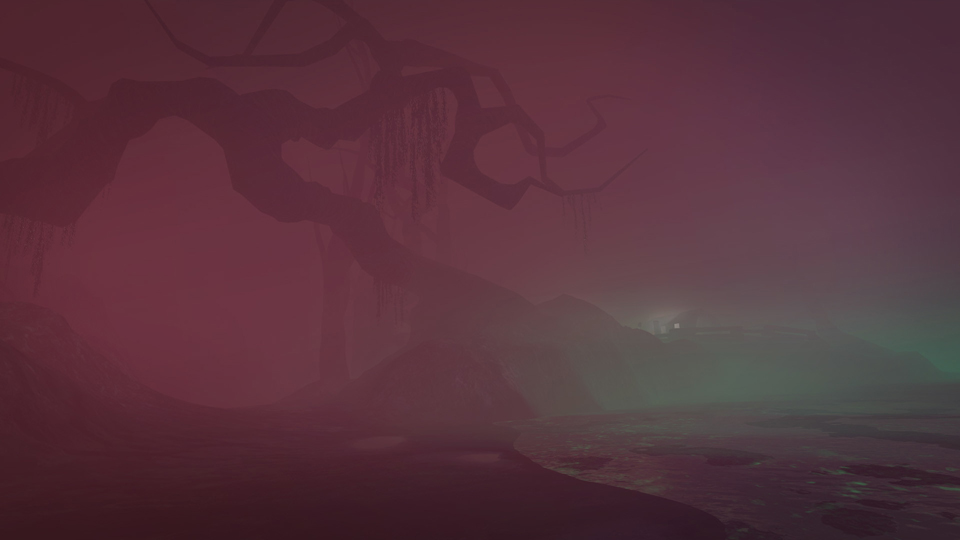 Visually, the developers have done a good job on creating a dark, oppressive Lovecraftian aesthetic that results in a tense and fraught atmosphere. For me, the best part of the game is when you discover the central camp –there’s actually things to look at and interact with there and a real sense of foreboding as the camp’s lights cast an eerie beam out into the foggy wasteland, and you see shadows of strange Cthulhu beasts moving through the forest and floating over the skyline. The tense atmosphere in these moments is palpable. Unfortunately, once you venture out of the camp all the environments become far less detailed and more repetitive and that initial tension is broken as you start seeing and doing the same thing over and over.

There are also quite a few bugs in the game (and I’m not referring to the alien spiders here!). Object interaction generally lacks precision and there’s actually a dearth of items to pick up or manipulate. I also encountered two game breaking issues: one where I dropped my gun and then was unable to pick it back up and one when I pulled a lever and it glitched into the machine behind it making it inoperable.

The overall package feels rough around the edges and uneven in terms of design decisions. For example, the saving and loading system is incredibly elaborate. To load a game, you need to insert a cylinder into a phonograph-type machine that produces light rather than sound. Your save file is represented by a beam of white light coming out of a goggle shaped part of the machine and you have to place your face into that light to take you ‘into’ your save. That’s an incredibly cool idea but its buggy, not that intuitive and in all honesty a highly developed system for something so perfunctory. I can’t help thinking that effort would have been better placed in developing some puzzles or adding some variety into the game. Also, and this is a note to all VR developers, it really is time to ditch blinding white light loading screens. We’re all worried about our eyes and beaming searing white light into your eyeballs from close proximity for 2 minutes is not helping. 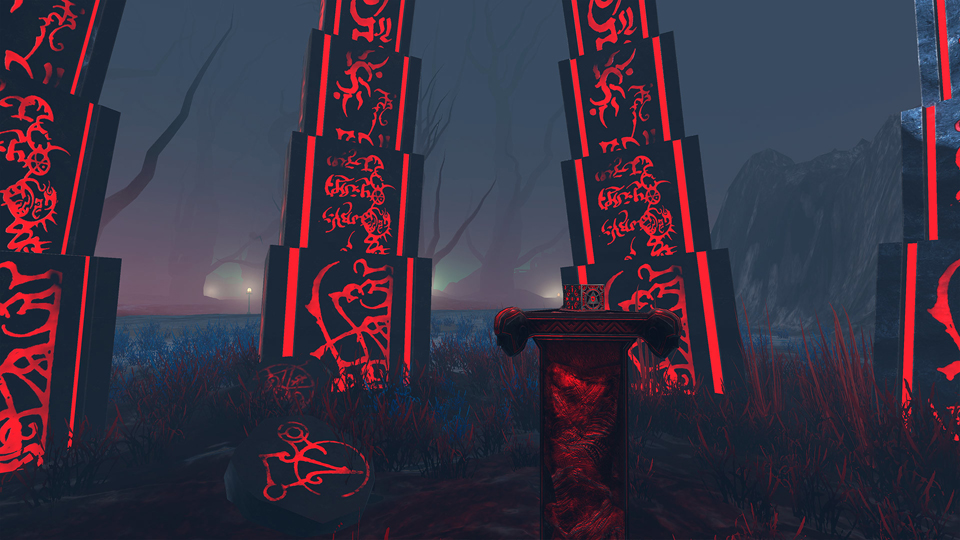 There are some striking visual moments in here.

As I already said, I do admire the ambition of the developers here, and we need games like this in the VR space, but unfortunately the various pieces here just do not come together to form an enjoyable game. I feel like the developers have bitten off more than they can chew by broadening out the scope of this game from their previous title and along that road forgot what made the first game a success.

What would I pay? £15.49 is a pretty reasonable price for a 4-6 hour adventure game but for that price the game lacks a critical level of interesting content and polish to make it good value. Proze: Enlightenment, also released this year and built from the ground up for VR, is a similar but better game and so I would encourage you to check

Gexagon VR provided The VR Grid with a press code for this title and, regardless of this review, we thank them for that!