Wats! VR Pest Controls is a small game taking place in a singular office room, plagued with filthy, nasty rats.  It’s up to you to not only catch these vile creatures but find a few hidden items and perform a couple of tasks all to get a high score. 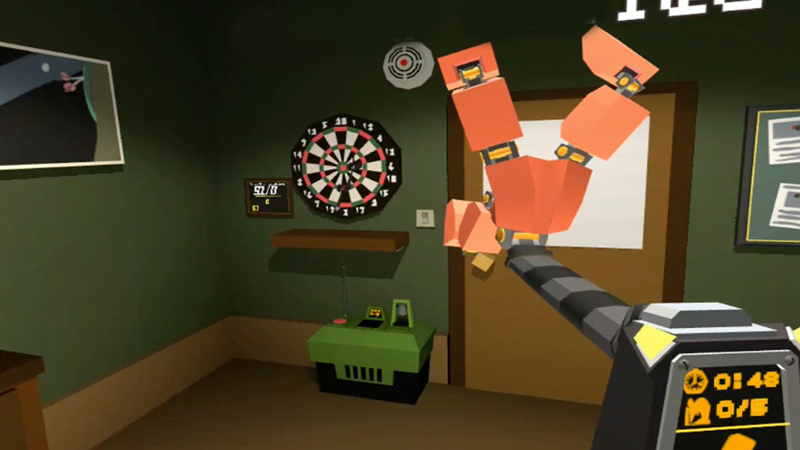 Can you get a bullseye???

With the touchpad controller, you are armed with a grabber arm that extends out (think Bionic Commando) and it’s up to you to navigate around the room looking for 5 rats hiding under or inside something.  You can grab almost any object around the office which you will need to in order to find those sneaky rodents.  Teleport navigation is also at play here allowing you to move around the office for a better vantage point.   Should you need help, a button is available on your cage by the door that will cause the rats to make a squeak to make it a bit easier to pinpoint their location.  Once a rat is found it will run around for a bit and then hide again, though thankfully discovered rats will come out of hiding if you ring a bell on your cage.  The goal is to not only capture the rats as fast as you can, but perform specific interactions with the items around you, all in an effort to get the top score.

Wats takes place in one stage only and it looks okay.  Typical of many VR games, the cartoon esthetic used here makes for a relatively clean looking game.  Almost every item is a simplified version of what you would expect to see in the real world.  Balls, skulls, books and whole bunch of other items (over 50 according to the store page) are at your disposal to mess around with and toss aside.  There are some lighting effects at play as well, though given the tiny play space, they don’t really get the chance to shine, but they do add to the immersion.  Once you have caught all 5 rats, the level ends and scoreboard pops up letting you know everything you did, or didn’t do, during that session. 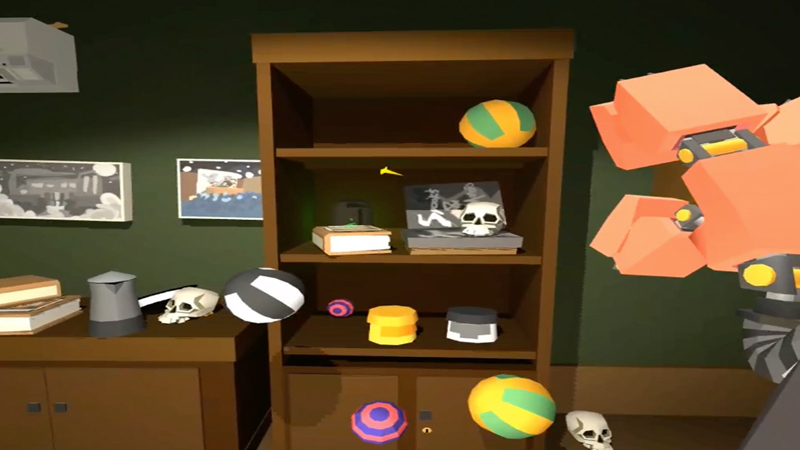 Go on…grab whatever you want!

Sound Effects are the crux of the audio department and they are great here.   Whether it be the opening of a window, throwing a dart at a dart board or listening to a record, everything sounds crisp, clean and authentic.  To get the full effect from the sound, and to be able to hear the rat squeaks, headphones are a must here.

The games main goal is to play and play again, getting the fastest possible time and the highest score and therein lies the largest issue with the game.  Wats relies too much on replaying the same experience over and over again and besides the rat locations, nothing else changes making each playthrough feel identical to the last.  That’s not necessarily all bad, but unless you are just dying to get that top score I feel most people will lose interest with this fast.  Secondly is the tracking issue of the touch controller which doesn’t like being pointed to far down…where the rats are.  Sure, if they scurry across the room you can snag em’, but if they run through your feet, it’s impossible to grab them causing some frustration.  Lastly is the gun itself which needs some fine tweaking.  It works great at grabbing stuff, but tossing stuff gets tricky as there seems to be a delay between pressing the button and the toss.  What’s worse is that even if you look away from whatever you have tossed, if you try and grab something to quickly, your arm automatically grabs the item you just tossed and in game where every second counts, these issues unfairly hinder your success. 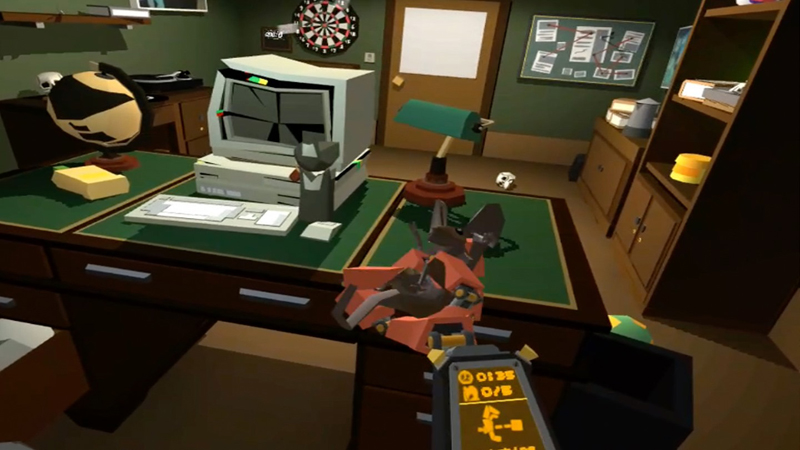 Your about to make this office your $!?*%

Wats: VR Pest Control is cute and fun for a tiny bit, but unless you are a point monger I doubt this will keep most peoples attention for more then 2 or 3 session in the game.  That said those 1st 2 sessions are probably where you will have the most fun as you figure out all the secrets in the room and search for those dastardly rats.

What would I pay?  I feel this is over priced considering the content value for most people.  I’d say $2 is a way more appropriate price for what to me is a next to one-and-done type game, but if you are motivated to climb those leaderboards, you’ll pull a lot more out of this then most.

Birdmask Studio provided The VR Grid with a review for this title and, regardless of this review, we thank them for that!