Let’s get our SHOOOOOT ONNNNNNNNN!!!! Space Pirate Trainer is a game I have heard about for quite awhile and has been a staple for VR headsets since its full release late last year.  The premise is simple, and the name says it all as this is a training simulator for…you guessed it, Space Pirates.  What this boils down to is a stationary wave shooter where you need to defend yourself from incoming flying robots who try their best to put you out of your misery. 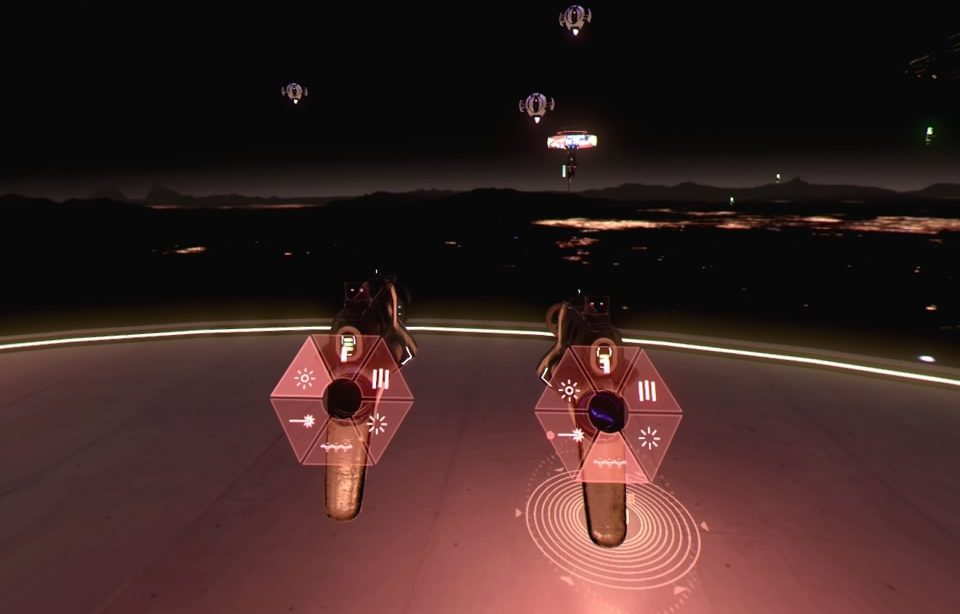 Choose your ammo type and unleash.

This is a dual wielding affair so of course you need 2 Move controllers. The base mechanics are anything but simple with a plethora of options available to dispatch your foes but are so intuitive as to make it very easy to switch between weapons and attacks.  You can dual wield pistols, with each carrying a variety of ammo types you can switch on the fly like a pistol, revolver, shotgun and laser which are tailor made for the variety of enemies you’ll encounter so mess around.  Reaching over your shoulder swaps the gun for a shield or laser bat(?) which can be used to block incoming fire or activate 1 of 4 turrets nearby.  To activate a turret, you lose the use of that arm, but they deliver a variety of barrages which once again, are tailor made for specific enemy types so mess around.  Throughout each wave you can pick up powerups which may offer you larger shields or different types of ammo like more powerful shots or missiles.  The drone like robots you face don’t hold back and while each type does behave in a specific fashion, when they unleash their attacks you need to be on your toes.  Luckily when laser blasts get to close to you, time slows down to a crawl giving you precious moments to figure out where you are being attacked from and dodge or shoot the blasts out of the air.  Your stock guns fire quickly for a few seconds before they overheat and shoot slower, so you need to release the trigger often to ensure you can fire as fast as you can as often as you can.  You can choose 1 of 4 gameplay modes; Arcade which gives you 3 lives to take out 35 waves of robots, each harder then the last, Explorer, which plays the same as Arcade but let’s you regenerate health but gives half the points. Hardcore removes the bullet time effect when blasts get to close and Old School gives you some classic waves shooting action and I honestly couldn’t tell you the difference between that and arcade other then a slight mix up in the waves…I think.

Shields are a life saver!

Space Pirate Trainer looks great with simplistic, but striking visuals.  Lighting and most objects are neon green in color while everything not colored is black making everything just pop.  There are only 2 different stages to choose from, which don’t affect the game, just the aesthetic but both look good.  Robots rise up in front of the platform you are on and come in a wide variety from simple small drones to larger enemies with each behaving in a specific pattern.  They fly around 180 degrees in front of you so it’s relatively easy to keep track of them early on, but later swarms come in such high numbers you’ll have almost no choice but to constantly move to stay out of the way of enemy fire while trying to send those robots to the scrap yard.  Every ammo type has its own look and feel with the turrets carrying some extra oomph as they obliterate in a spectacular fashion.  Everything runs flawlessly making for a smooth and near perfect experience and the bullet time effect, when activated makes you feel like a badass.  The sound is also spot on with some high-octane techno tracks to get you in the butt kicking mood.

Space Pirate Trainer is a near perfect arcade style stationary wave shooter offering intense action typically in short bouts.  There is no campaign to speak of, just pick a mode and see how far you can climb up the leaderboards.    I would put this in the same rankings as the much-lauded Blasters of the Universe and the under appreciated VR Invaders as being great examples of the genre.  This is great fun in VR and while “yet another wave shooter’ might bore you in concept, there is a very good reason why people hold this game in such high regard.  The shear variety in methods used to take out these drones keeps the game feeling fresh, as long you play in small sessions, which the game is kind of designed to do.   If you dig wave shooters then this is fantastic, but if you are looking for a little story or change of scenery, it’s not here.  The focus is on the gunplay and in that regard, Space Pirate Trainer nails it! 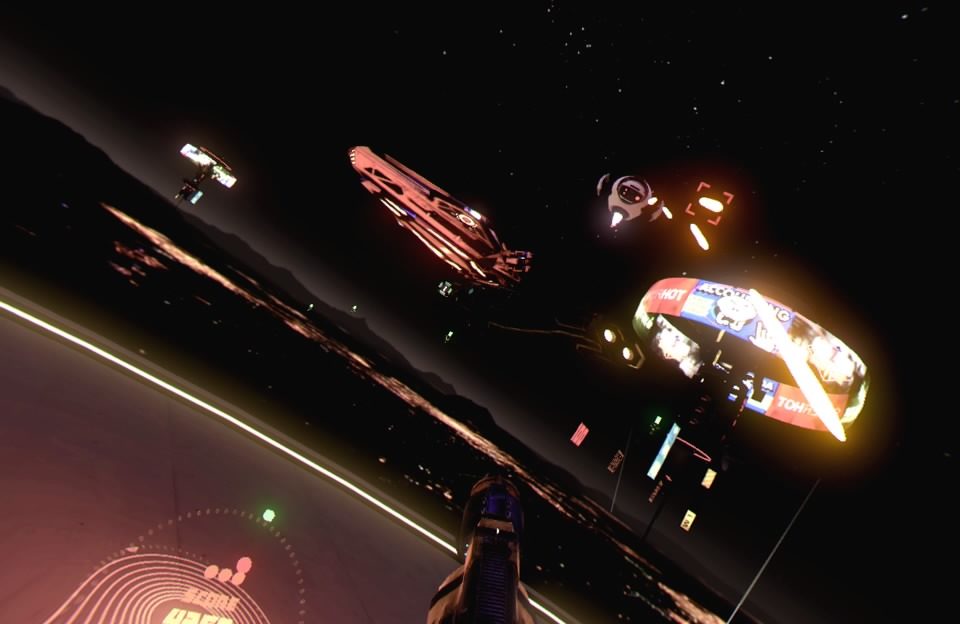 Space Pirate Trainer will totally tickle that FPS itch as long as you don’t care about plot and love any excuse to blast whatever is in front of you.  The combat is satisfying and gets incredibly challenging, the power-ups spice up the gameplay and the slow-motion Matrix effects add to the visceral VR fun and like I said, this is a mechanically perfect wave-shooter and while it may be a bit on the simple side in regard to content, it more then makes up for it with the ridiculously fun gameplay.

What would I pay?  This is a great showpiece for VR as anyone can pick this up and play it, making this a title that I will show my friends and gives it value beyond my own personal interests.  I’m okay with the $15 asking price on this for that reason and like I said, this is a technically perfect wave shooter.

I-illusions provided The VR GRid with a code for this title and , regardless of this review, we thank them for that!