In the last year we have seen an emerging of more physical titles in games like Sprint Vector, Knockout League and Creed, with those titles all be welcomed with open arms as being both fun and physically demanding.  2 of those games I mentioned are boxing titles with Knockout League being a Punchout clone that nailed the single-player gameplay from that classic franchise and Creed delivering a more simulation style boxing game with online multiplayer that for the most part, worked great.  Now we have Boxing Apocalypse, which takes pugilism to space as you fight alien after alien in your quest to defeat your captors and attain freedom or face friends in the online portion of the game. 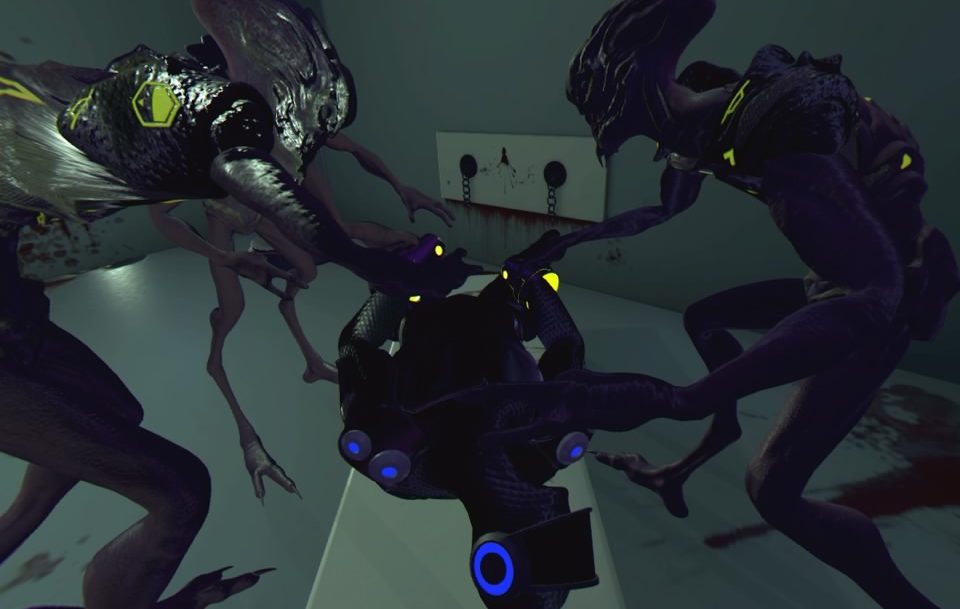 You are nothing more then an alien experiment!

It’s boxing so you are going to need 2 Move controllers and let the punching begin.  I would advise to play through the tutorial as besides just punching aliens there are a few other unique abilities and powers in the game.  Performing combo’s gives you a Power Punch which is used by pressing the trigger and Move button at the same time and is basically a 1 punch knockout if you land it.  To block you need to hold your hands up to your face and use the block tool to deflect incoming blows and your boxing gauntlets have weapons that can be unlocked through the campaign that deliver varying amounts of additional damage, though can only be used a small number of times.

The campaign offers 3 different difficulty modes, each containing 3 waves with 3 rounds each with boss battles though each increase in difficulty just reduces your health and the enemies get more aggressive so on the hardest difficulty, losing feels really cheap.  To say the action in the single player campaign is uninspired would be an understatement.  Accuracy and timing are key, which it should be in any boxing title, but in here it’s either to picky with the timing or not picky at all…I can’t really tell.  My hits failed to register on numerous attempts effectively forcing me to box like I was in Punchout, waiting for the enemy to strike so I can deflect their blow and land a punch before turtling again.  On the easy difficulty, you can take a lot of damage and unload without much of a care, but on medium and hard, I found just turtling and countering wasn’t just the easiest way to progress but ended up being the ONLY way to advance. 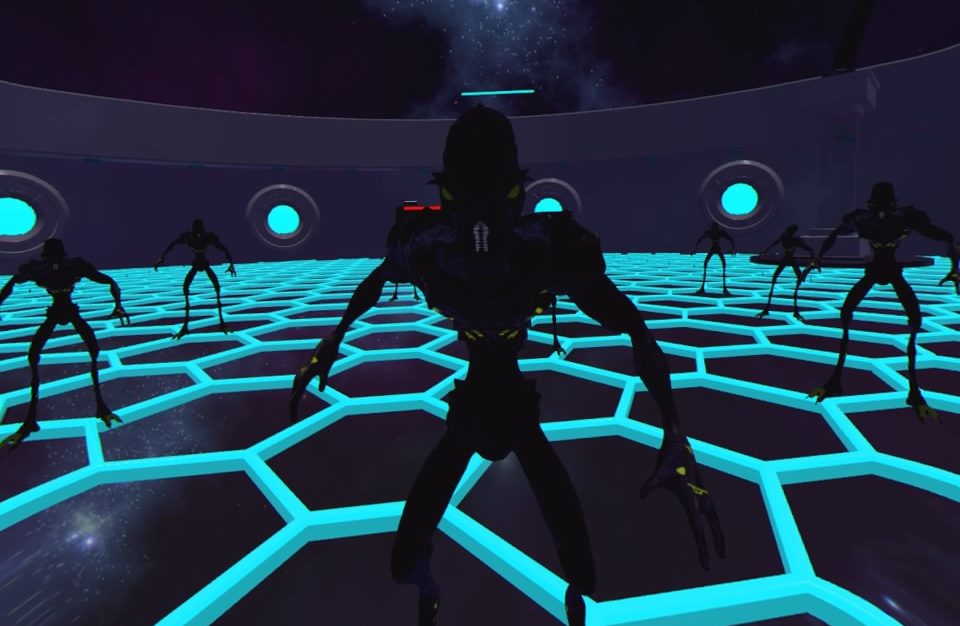 Get ready to face the same aliens again and again.

So with the campaign being fluff, and really nothing more then practice for facing human competition, we can also put our skills to the test in some 1 on 1 PvP fights.   According the devs, this is the highlight of the game with it being a ‘true fight simulation’ using ‘Real life boxing technique’ and while that may be true if you choose to play that way, online matches, if you can find one, quickly devolve into slugfests.  You are supposed to use the play space to simulate real life boxing movements and maybe if you and your opponent could coordinate before a fight, there is no mic support, you could try and put on a ‘professional’ bout, but it’s so much easier to just flail wildly and anyone trying to use skill will more then likely get stomped.  Power punches and the gauntlet weapons make fights incredibly short and while the blocking works suprisingly wel some of the time, at other times it feels like your oppenent can just punch through them whenever they want to.  Add in that every round both players spawn in the same spot, forcing you to back up to properly face, possibly leaving the tracking range of the camera, and you get a mode that’s more of chore then a treat.

Boxing Apocalypse does not look good, there is no getting around that fact.  During the campaign you fight 1 model of enemy, though it comes in varying sizes and the backgrounds and setting look like purchased assets with stiff, limited and repetitious animations.  The aliens look like there are lighting effects at play with some good-looking shading, but that’s actually just part of their models, which is made quite obvious by the lack of lighting effects anywhere else in the game.   The one highlight is the comically awful power punch animations when you connect with an enemy, often blasting the eyes right out of their heads or just dismembering them in 1 blow, though these repeat so often you’ll quickly be bored of them too. You can choose from a few different stages but none of them look good and while they do have a sci-fi theme, the lack of detail on all them makes it hard to tell there is a theme at all. 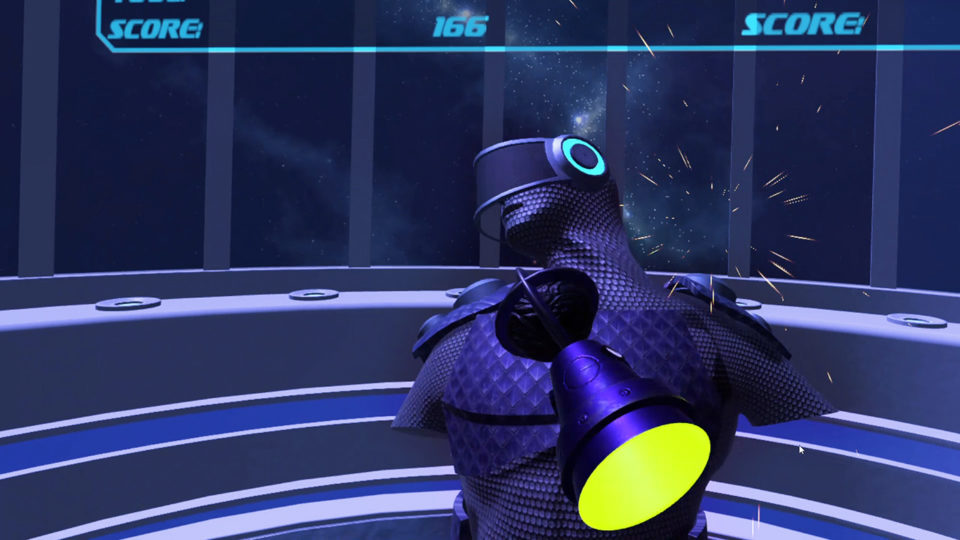 This is less fun then it looks

The sound effects are also comical with Bruce Lee-esque “thwacks’ echoing when punches connect and that’s really about that as far as sound goes.  The music is really odd and feels like it’s been taken from like 60’s low budget science fiction movie and does not fit the boxing action in any way whatsoever.

So, if it’s not apparent yet, I’m not the biggest fan of this game and while there is a so bad it’s kind of good quality to this, it’s mostly just bad.  Every time you finish a multiplayer bout you have to quickly check the scoreboard that pops up to see who won before being kicked back to the main menu.  Every time you start a campaign bout you are treated the same cut-scene of the aliens putting on your space gauntlets before knocking you out and fighting through the same aliens over and over.  The single player campaign feels like the same bouts again and again and the multiplayer is the same thing, just more chaotic and that’s assuming you can find a match. 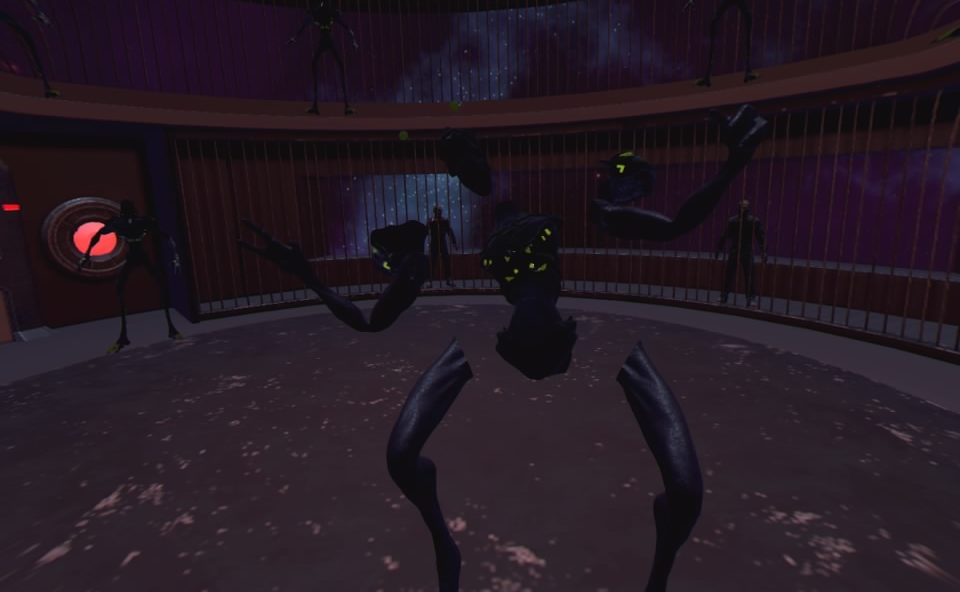 Boxing Apocalypse ultimately fails in every aspect I can judge a game by.  I had some brief fun in the multiplayer but that’s mostly because me and a buddy were laughing at how broken the game is.  The combat is uninspired and the whole game lacks any of the refinement of the other available fighting titles, including Drunken Bar Fight and at least that game knew what kind of game it was.  This game takes itself way to seriously for what it’s bringing to the headset and just isn’t good.

What would I pay? I’d can’t recommend paying more then $5 for this game unless it gets some dramatic updates.  The $20 asking price is nuts and even if it were to go on sale, just put that money toward Knockout League or Creed instead.

Gotham City Films provided The VR Grid with a review code for this title and, regardless of this review, we thank them for that!