Racing and VR go together like Hot wings and Ranch dressing. It’s a genre that highlights many of the pros of the virtual world and minimizes its cons.  While the PSVR has seen a few different racers released in the last year, it has never seen a game like this.  Part sci-fi space race & part 360 rollercoaster, Radial G looks to bring a more ‘arcadey’ (it’s a word!) racing experience to your headsets. 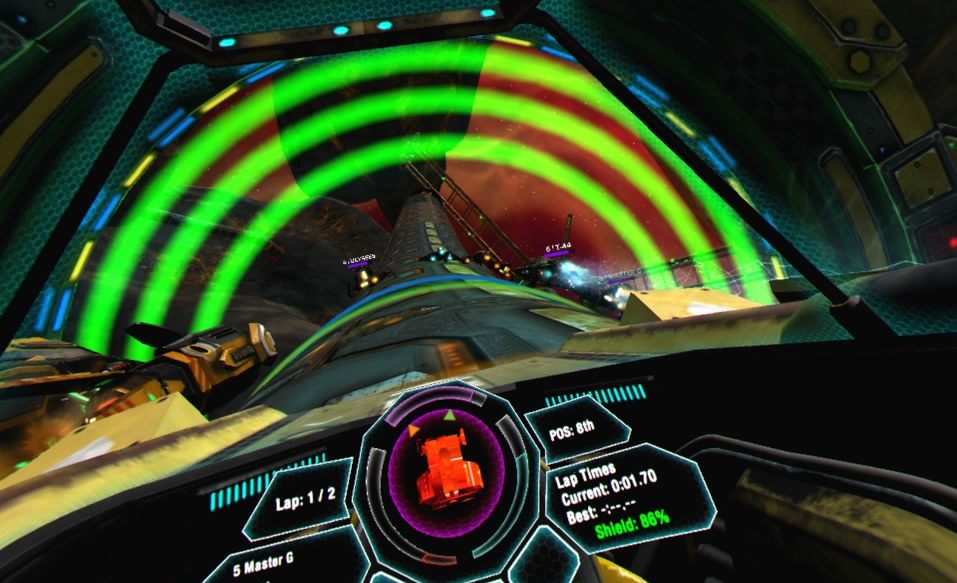 It’s DS4 only here and the controls are simple.  Each course takes place on a tube that winds and weaves its way all over the place.  From the cockpit of your ship (your only VR view) you can move left or right anywhere around the circumference of the track while flying forward (hold R2), dodging obstacles all while trying to hit boosts and jumps.  Additionally, you have a shield/boost bar which offers protection from impact against obstacles, weapons and other vehicles.  This is a great, though occasionally unbalanced mechanic, that forces you to decide between protection from the environment or a much needed to boost to keep up with the racers ahead of you.  There is a ‘tutorial’ option available, but it is laughably bad and just comprises of some pics that explain what you could learn through playing just 1 race so just don’ bother with it.

The core mechanic here is moving forward, trying to  hit boosts and ramps while avoiding barriers and pits.  For the most part, the 9 courses offered are balanced and fair and offer a lot of challenge, even in multiple playthroughs.  Each stage contains its own unique feel with jumps being more prevalent in 1, while next may feature a few paths that branch off from your tube forcing you to stay on the track lest you fall to your doom.  Also found throughout the game are power regenerators that replenish your shields/boost, or anti-grav transitions that flip you upside to the outside portions of the track, as well as a variety of moving and stationary barriers that need to be avoided.  At the higher speeds offered here, avoiding and hitting these objects can be challenging, exhilarating, fun and frustrating. 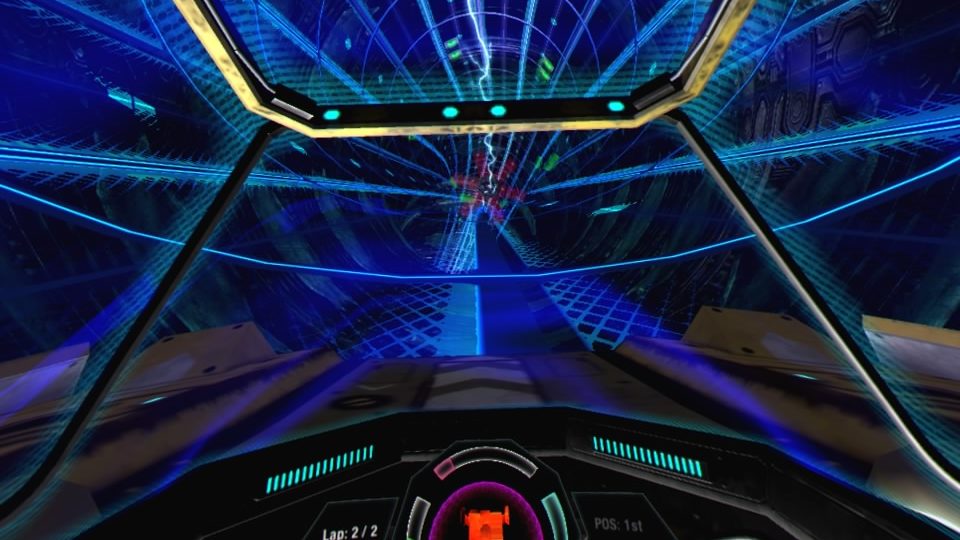 Things can get hectic when your flying through electrified corridors

The campaign/career mode consists 18 differing race challenges.  Your standard race which pits you against 7 other opponents in 2 lap races to the end.  Hot Lap is a similar affair but requires perfect runs (hit boosts, don’t hit barriers) and are short and sweet.  Eliminator is the same as a regular race, except if you die than you lose and Rival Race pits you against a singular boss.  Combat Race adds weapons to the mix making for a different way to play.  Driving over weapon caches triggers a random weapon; mounted gun, missile, mines…) that can be used against the enemy.  This is both a blessing and curse as this mode results in equal parts frustration and fun, but that is also typical of the combat racer genre and overall and I still enjoyed it.

Visually, this game looks, and feels, best at top speeds.  When each race starts, the view given gives a good look at the distant track, though close inspection reveals some pretty drab ship and track textures.  Most of the visual flaws are rendered moot once the race starts and you’ll be so busy focusing on what’s coming next to even notice that it may (or may not) look good. I also found the color palette to be a bit drab at times with heavy use of greys and browns making the game feel darker than it is.  I think this was done intentionally to make powerups and some more crazier moments in the track stand out, but I would have appreciated a more varied color palette, if not just to match the intensity of the game.  I found the audio to also be a bit subdued with sound effects just not having the impact I would have expected.  I did like the audio tracks and though the techno beats came off as being a little generic, they still fit the game nicely. 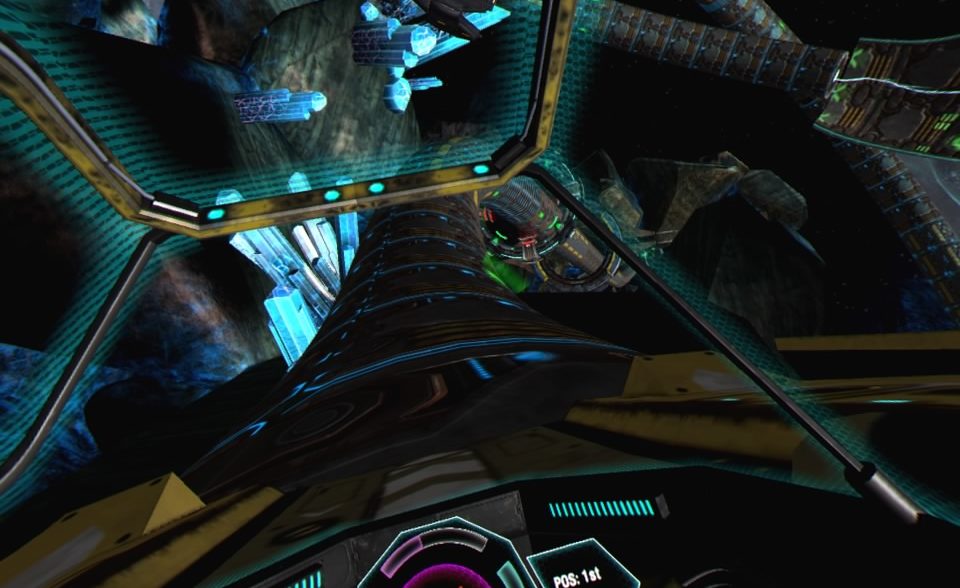 This game gets nuts.  The speeds at which you fly down the course are both exhilarating and daunting.  Narrowly avoiding an obstacle while flying around a huge loop is insane.  It took me some playtime to realize some of the subtleties in each game.  While flying blind around the outside of giant loop is exhilarating, it also leaves you blind to what’s coming next.  Instead, try and take the loop on the inside, it allows you to see upcoming objects and adjust for whatever the track throws at you next.  Boosting at the start and balancing your power usage all take time to master.  You have 6 ships to choose from, though most aren’t unlockable until you beat portions of the career & multiplayer mode, with each having various levels of power, speed and control.  Of the ships I played, each did feel slightly different and you are sure to find the one that matches your play style.

Multiplayer is here as well and offers up every option I have listed so far on all the tracks with up to 7 other racers.  Can’t find a match?  The devs were kind enough to fill in empty spots with bots so races are always full.   Leaderboards are also present offering a few different rankings based upon race time and ship class.  All this makes for a welcome addition as playing against human opponents always feel way fairer than the harder AI options.

The AI can be incredibly frustrating as they navigate courses with ease while you struggle to react to barriers and pits just in time to avoid them.  Falling behind the pack makes it nigh impossible to catch up (at the later stages) and it’s much easier just to restart than power through to the end.  As my skills improved, this did become less of an issue, but on the last 6 stages, be prepared to play them more than a few times to beat them.  My only other major issue was the track layouts themselves, most felt fair and after playing through them multiple times, I began to anticipate what was coming next and adjust.  The one level that just seemed unfair was ‘Processing Plant Delta’ with pits appearing so fast after tight turns I was given no time to react and blinding speed of the corners beforehand prevents any kind of memorizing.  Besides that singular track though, the rest feel much more fair and fun to challenge. 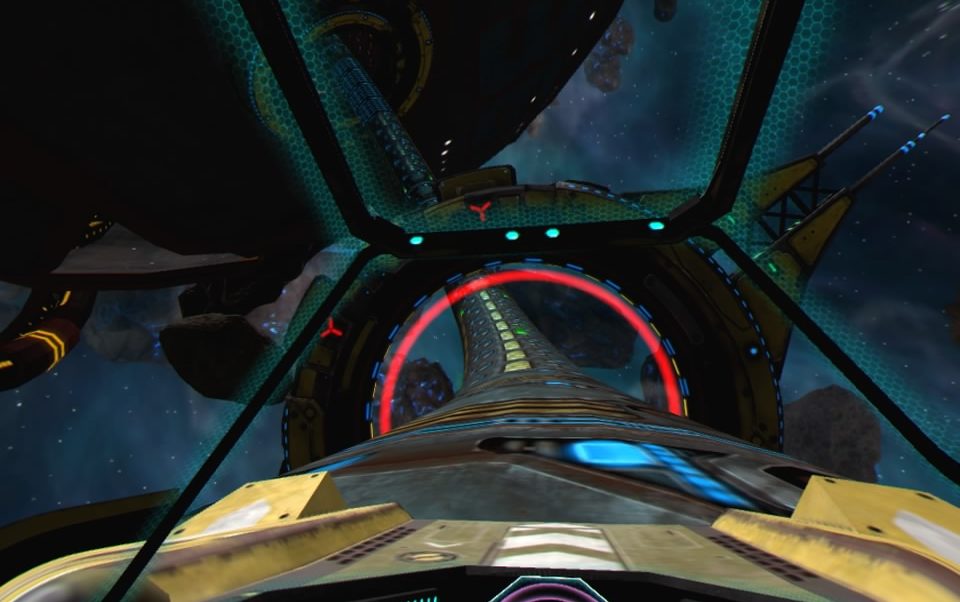 Keeping an eye as far ahead as you can see is the best way to stay ahead of the competion.

Radial G has its flaws for sure, but flying through space taking jumps that you are never sure if you are going to land (you almost always do) all while trying get the 1st place position, while hitting boosts, avoiding obstacles and trying to see what’s coming next is a blast.  I hope this sees a decent player base and a sustainable multiplayer audience, and with that maybe a few more levels.  I had fun and I suspect many of you will too, it plays more like an arcade game than a fully fleshed out racer, but that’s a design choice that, for the most part, works great!

What would I pay? $35(the asking price) would be my limit for what’s available here.  I would have like a few more courses but I still had fun with what’s here and intend to come back often for the  online multiplayer.

***NOTE*** While I did play through the the multiplayer portions of the game(with bots), due to pre release, I was unable to actually play with another human being.  As soon as that happens, if for some reason my thoughts change, I will be revising this asap.

Tammeka provided theVRgrid with a review code for this title and , regardless of this review, we thank them for that!