I love when something new comes our way in VR, or at least something that mixes a bunch of known gaming elements and merges them together into something that feels fresh.  Just in Time Inc. puts you in the role of an associate at an insurance firm which utilizes super heroics and time travel to help save their clients from some unfortunate fates.   It’s has comedy, action, suspense and some intuitive puzzle-like situations that had me watching my clients die over and over until I figured out what to do. 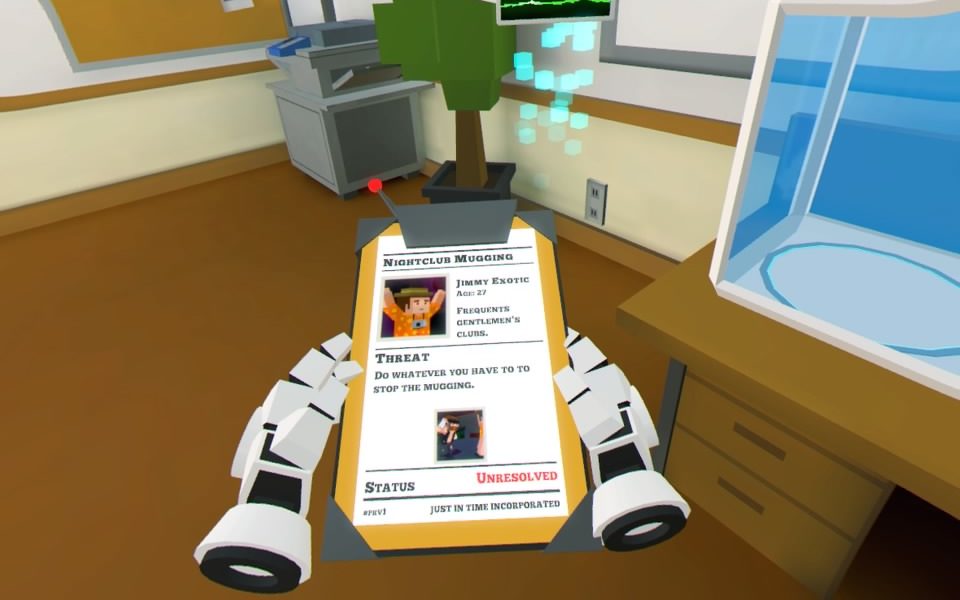 Each mission briefing has some comical elements

As you are armed with 2 power gloves, you are going to need 2 Move controllers, and unfortunately, it’s only click-turning and teleportation here.  I’m okay with the teleportation as it is incorporated in the game quite nicely though an option for free turning feels missed.  It’s explained that your gloves cause time to slow down, which I assumed was a power I could turn on or off but is actually just some justification for the entire game playing in slow motion.  The gloves you wear can also catch bullets, which can be aimed back at the enemy who fired them, or anyone else for that matter.  Additionally, you can grab select items in each stage, which typically can help you solve that puzzle.

If you have played Out of Ammo, this game looks like it takes place in the exact same universe.  Characters are very blocky with some low-resolution pictures in place for clothing and other details.  It’s not the most impressive game I have ever seen, but it does play flawlessly, and the simple art style allows for some seamless action.  Every stage is in slow motion, while you are not, making for some cool and often time hilarious visuals as explosions slowly expand from their source, an army of giant rats slowly makes their way toward an unsuspecting scientist or you may be busy slicing off heads with a samurai sword.  Each stage contains a different look and other then the bad guys, you never really see the same things twice.  It’s crisp and clean and as each scenario is introduced, the art style just gives everything a very comical vibe! 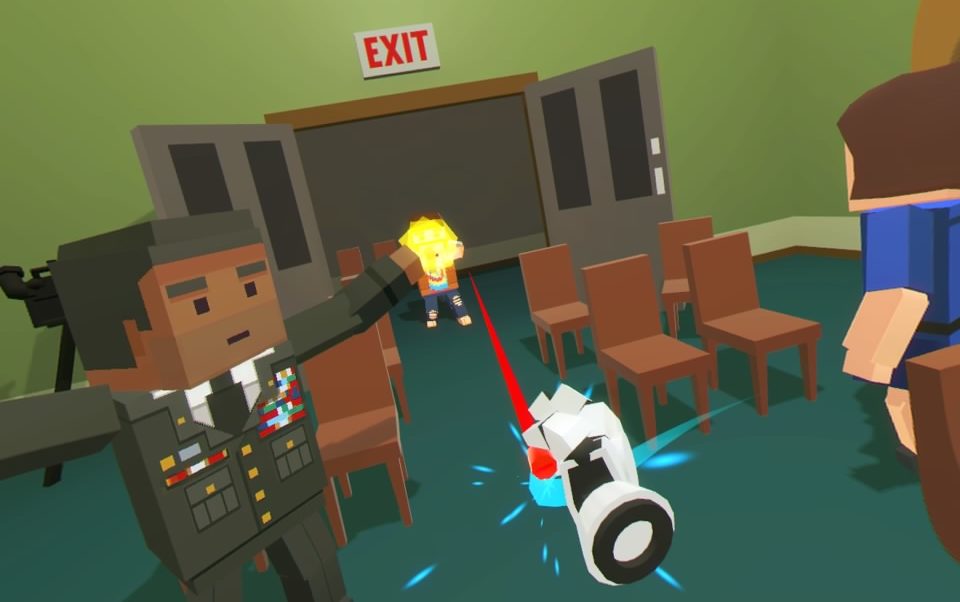 They call me ‘The Bullet Dodger…errrr Catcher

Many moments in the game are inspired by pop-culture references and as such carry some nice music which fits perfectly with the parody nature of the game.  Levels inspired by James Bond or Indiana Jones contain some subdued tunes that match the action perfectly.  Sound effects are also decent, but as the game is in slow motion, the only effects I really noticed was the sounds of gunfire and explosions. In no way does the sound detract from the game and my ear holes were happy.

The game is broken up by 3 separate tiers or promotions, plus some bonus missions.  The initial stages are relatively easy and introduce the necessary mechanics for later missions.  You can grab weapons from bad guys hands, pick up and toss grenades, teleport across a level in almost an instant, take off sprites clothing, punch a clown and a few other whacky things that make this game about death quite comical .  Stages contain specific items to help you prevent the death of your client, sometimes offering multiple solutions and some replayabilty to the game.  Scenarios also range from escort type missions to saving people from a burning building, circumventing an assassination attempt or stopping a suicide bomber.  There are a host of situations that make each stage feel fresh, and though some can be circumvented in a minute or so, once you know the solution, others may require attempt after attempt as you constantly fail at saving your targets.  Frustration will abound in these stages, but as you get closer and closer to your goal with each failure, it just makes victory taste that much sweeter.  Each scenario feels unique so if you aren’t a fan of one, you can revisit it later and check out the other unlocked scenarios at that promotion level.  It’s all very tongue in cheek and works wonderfully and never wore it out its welcome. 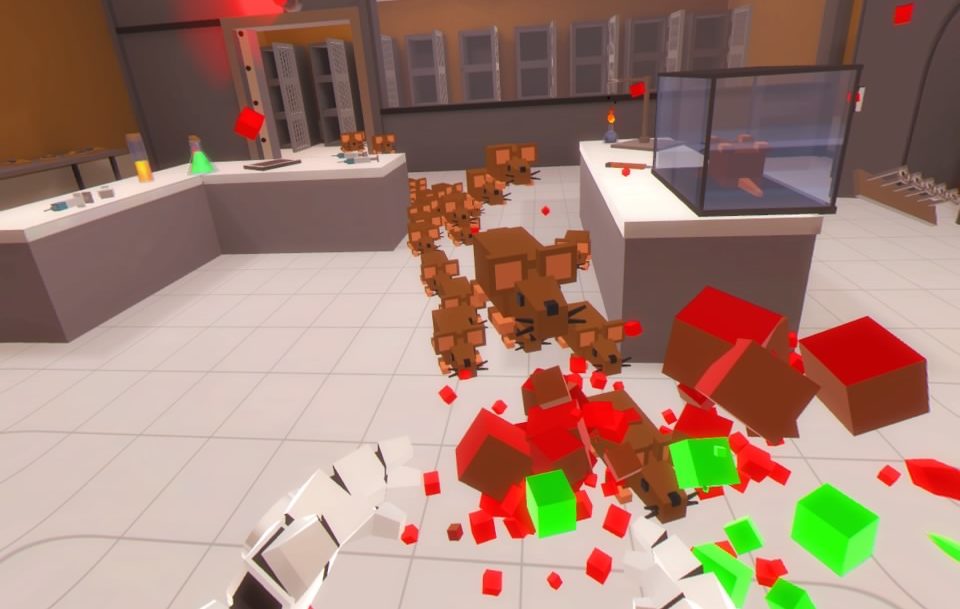 My largest issue with Just in Time Inc is the controls.  Some levels require you to be on your toes and failing to act to fast will result in a forced restart of that mission.  I found throwing items to be very finicky and more often than not, whatever I tried to throw far typically ended up at my feet, forcing me run away lest I hurt myself.  I also found the click turning to be a little cumbersome  during a few missions and getting to close to whatever you are grabbing is all to easy with teleport only movement.  It’s never game breaking by any stretch, but when I failed a mission because of the movement mechanics, I couldn’t help but get a little irritated.   A smaller annoyance I had was the lack of interactivity the stages did have.  Given the scenario, it might not matter, but in some of the larger stages, it feels like there is a lack of options when it comes to environmental variables forcing you to play a little more linearly then the game suggests. 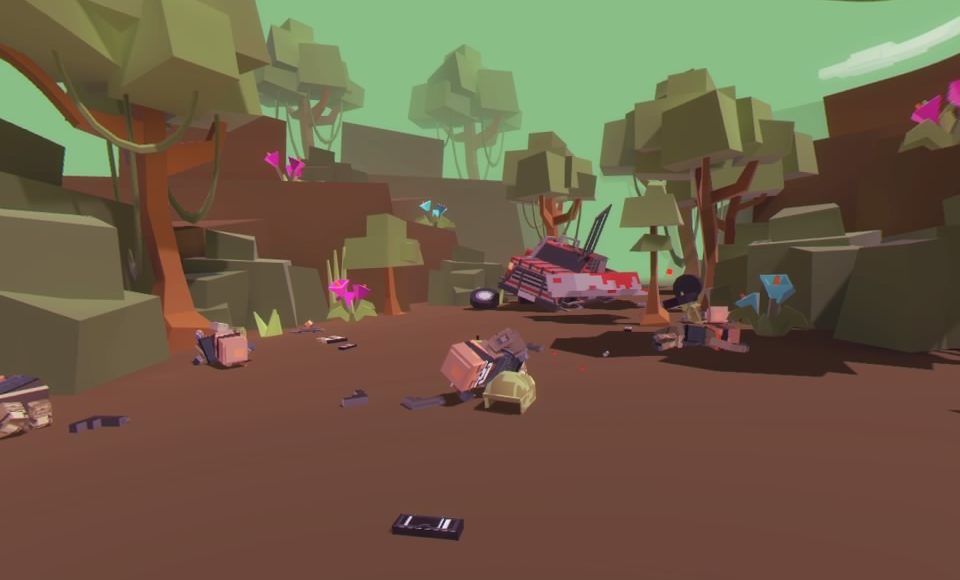 You see that boys and girls? That’s what success looks like!

With those gripes aside, Just in Time Incorporated is still a well polished and unique game that entertained me throughout my hour and half or so playthrough.  A few missions held me up as the trial and error gameplay threw me for a whirl, but I really did enjoy figuring out the solutions to some of these scenarios or just racing around the map like a mad man trying to kill bad guys before they killed me or my clients.  The short nature of many of these stages also lends itself well to sharing with friends as watching someone fail at a mission you beat on the first try is always good for a laugh.  Just in Time Incorporated is a great change of pace to many of the games we have seen in VR and has enough charm and polish to back up the solid gameplay.

What would I pay? The $15 asking price for this is spot on.  It’s not a large game and I enjoyed the challenge some of the stages offered as well as the dark and (slightly) sadistic comedy vibe that peppers this whole game…plus saving guys and gals in slow motion always makes me feel like a badass!