Oh man do I love a good old-fashioned physics-based puzzler.  Ever since Portal (HOW IS THERE NO PORTAL VR!) I have fallen in love with 1st person puzzler with VR obviously amplifying that genre and delivering us excellent titles like Red Matter, Transpose, Statik and a host more so when I heard about DeMagnete, I was immediately intrigued as it has a unique puzzle element in the use of magnets as well what looks to be a pretty slick story, a combination that truly makes for an excellent puzzler. 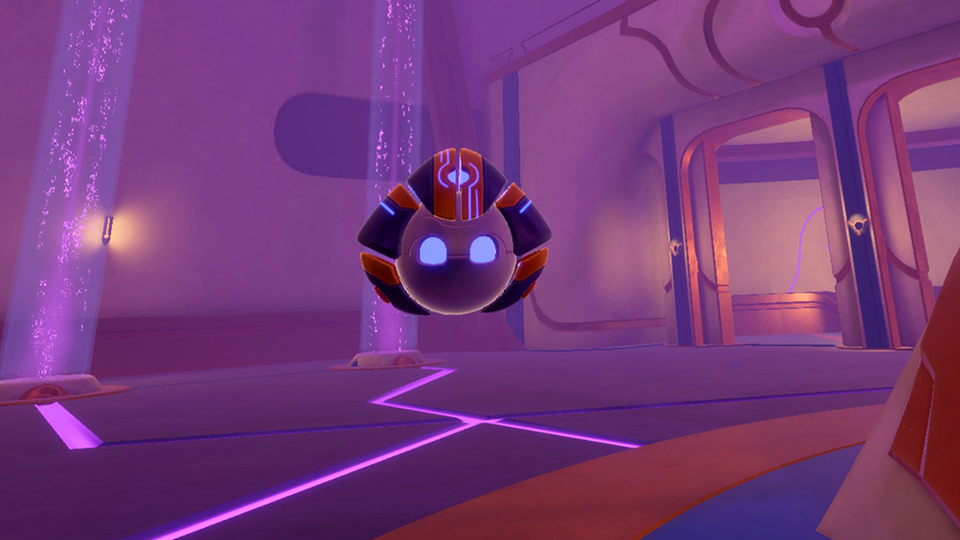 Standards first person VR controls are in effect here with options for smooth locomotion on the PC side of things with slider bars as well for faster and slower movement, which is awesome, though many of those options are lacking on the PSVR version which is relegated to teleport & click turning only.  Each of your hands can push or pull items using your magnetic force gloves with a bulk of the puzzles having you manipulate small boxes to hit buttons to open the door to the next puzzle, not unlike Portal.  It’s how that magnetism is used that makes this so fun as the puzzles may require you to use similarly charged boxes to push against each other while using opposing charged boxes to slam together to hold buttons in place, opening doors to access other buttons and the eventual exit.  You may have to guide a box through a mini maze using only the force of the magnets with a bulk of the opening puzzles relying largely upon that core mechanic.  Soon enough though, you’ll encounter switches for barriers that only let specifically charged blocks through, bounce pads that will knock a box around the environment, boat rides where you need to push and pull at posts to navigate lava filled lakes & circuit systems that need activation.   The puzzles of course start off easy enough and I blasted through the 1st few chapters quickly with the latter half of the game often stopping me in my tracks multiple times as I tried to decipher the next puzzle and the solutions only got more complicated.  There is a light story here involving you, D, and your companion Q, as she initially monitors your progress and eventually joining you as you venture further and further into this underground facility unlocking the secrets of its existence. 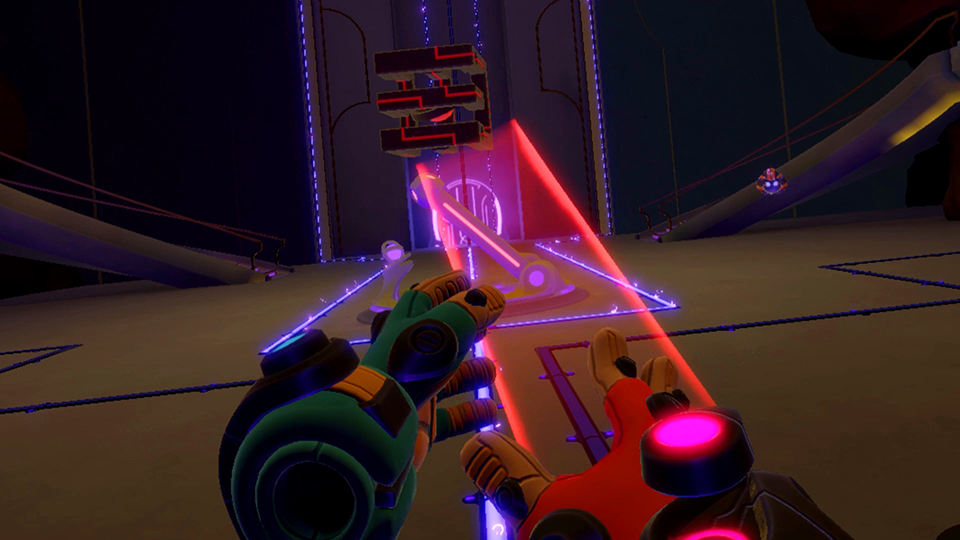 You are the Magneto of puzzle solving.

DeMagnete looks great, reminding of VR classics like Vertigo Remastered or even Budget Cuts with it’s cartoonish aesthetic built around a world that feels authentic and real.  You wake up in what appears some sort of underground living quarters and venture through a facility that looks futuristic and a little alien.  As you get through the campaign, the facility starts to experience problems, allowing for a little more freedom of exploration between puzzles, which is recommended as some of the discoveries hidden off your main path will drop some  hints as to the much larger story. Lighting effects are on point and there’s a nice level of detail to everything you can see from the little sparks of electricity bouncing off the blocks and circuits running throughout the facility to the towering doors and cavernous walls. Some puzzles are small, typically being in a room no bigger than the top floor of a house while others can be massive as you may need to move blocks across those larger rooms to press a button that’s very far away from you.  Your magnets show their active field of magnetism in the form of a see-through globe and are inactive when they are in your hands so you don’t need to fight their magnetic forces unnecessarily while moving them around and when put down, indicate which direction they will move, if any, if they are attracted or repelled by anything nearby.  It’s a fantastic looking game with a great sense of scale, impressive physics and a refinement in the visuals that we need to see more of.

An ambient soundtrack accompanies you on your journey, oftentimes falling into the background ahead of the sounds of dripping caves and thrumming devices though is always there and helps amplify whatever situation you may find yourself in.  Q, voiced by the fantastic Ashly Burch, is ridiculously charming and endearing as your little floating robot companion who seems to be in charge of the facility but seems just as confused as you at times as she drip feeds tidbits of info about the facility while reacting in surprise when machines don’t work like they are supposed too.  Really, the sound design is also on-point with the overall presentation being a welcome break from the (too)many smaller titles we have been getting in recent memory. 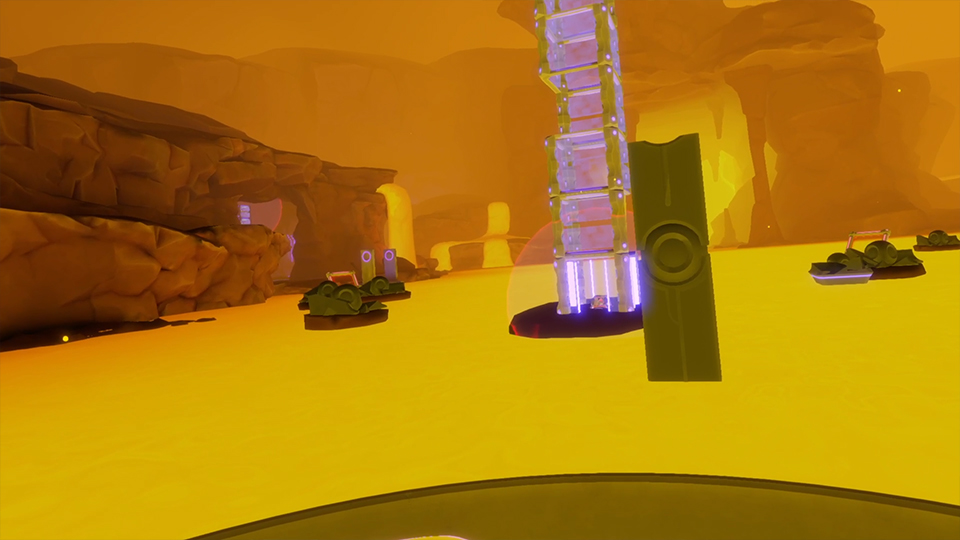 It’s hotter than hell down here!

There is a quality to Demagente that seems to be lacking in VR of late with the emphasis being on the Quest headsets, which just can’t do what PCVR & PSVR can. As such, Demagnete is not only a welcome change of pace from the norm when it comes to VR in 2021, but also feels like a throwback to those puzzle/escape room type games like Portal or The Stanley Parable and that includes the level of polish both those games come with.  It’s not perfect, with the PSVR version suffering the most thanks the exclusion of those smooth locomotion options though there are a few other problems that I need to mention.  While the PC has smooth locomotion, when it came to getting into and out of my lava boats, I had to switch to teleport as the game had me colliding with invisible walls.  Some puzzles are also exploitable thanks the ability to walk through certain walls or even move your hands past certain wall types, allowing some complicated puzzles to be solved quite easily.   There is also no seated option for play so I either had to stand or play the game as a little person which thankfully didn’t mess anything up but my view.  Switches can also be really finicky as you need to keep your hand on them, though many are floating in place, subtly moving up and down and if I wasn’t looking to ensure my hand stayed near it, I often stopped pressing the button as I looked away, trying to move a block into position.  Lastly would be the save system, which only lets you start at the beginning of a particular stage but with each stage containing multiple puzzles, getting stuck on 1 and quitting will force you to play through that stage again to get caught up. Otherwise though, it was a relatively smooth experience and the 4-hour campaign was a treat from beginning to end. 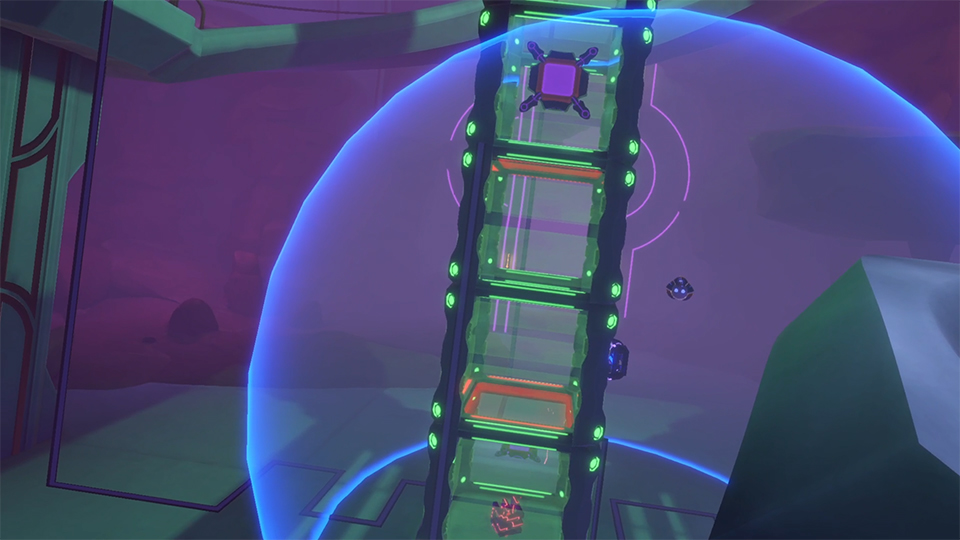 DeMagnete is a puzzle lovers delight offering up more than 40 individual conundrums to get through in a great looking world loaded with detail.  The puzzles get very challenging, and the way magnets are used to solve them makes for an experience that feels a little familiar, but wholly unique.  If you are looking for a little more quality in your VR puzzlers, don’t look past DeMagnete as it delivers satisfying and immersive gameplay packed full of charm and polish.

What would I pay?  This is $20 and a bargain at that price, assuming you like tickling your brain. If you are on the fence there’s also a demo available on Steam you can try 1st but I’m telling you, if you like physics-based puzzlers, you’ll like this!

BitCake Studio provided The VR Grid with a press code for this title and, regardless of this review, we thank them for that!