Holoball, developed by Treefortress, is available for the PlayStation VR and the HTC Vive via download only for $14.99US.  Supporting 1 or 2 Move/Vive controllers(as well as 1 DS4 controller for local multiplayer), this game takes place “in a retro-future world ruled by rogue AI”.  For all intents and purposes this is essentially a sci-fi themed raquetball game, and it works great!  This title was reviewed on a standard PlayStation 4. 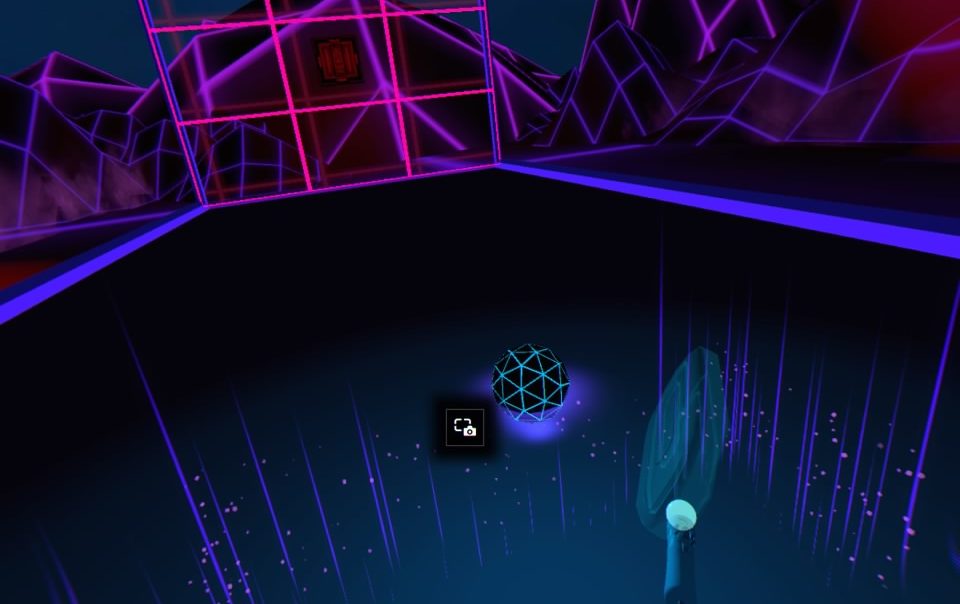 Everything you need to see is in this picture.

What immediately stands out is the calibration section of the game which has you standing 6 to 8 feet away from the camera and has you touch the ground so the camera knows where it is.  I keep my camera low, but this game forced me to put it above the TV to better track my body movements.  No game has asked that of me before and I was immediately intrigued.  If you have played Danger Ball on the PlayStation VR Worlds Disc than this will be instantly familiar as you are facing off against square robot/paddle while in a large cube like structure.  The major difference here is you have a virtual paddle courtesy of the Move controller instead of using your head.

Additionally, the game displays a grid showing you the boundaries you can move around in, and you will be moving around.  That’s the name of the game here; it’s racquetball in VR, against robots, fighting for your freedom.  Everything here works almost flawlessly, minus the occasional bad hit which had the ball moving to slow too continue the action, though you do have the option of recalling the ball If it is moving slowly.  Accuracy is key as you bat the ball back and fourth against your opponent.  You will be moving around for that perfect swing (or back swing) and reaching both high and low as the enemy increases in difficulty.  Added to all that are skill shots which curve the ball and confuse your opposition. Depending on your commitment to getting that high score, you may be breaking a sweat as the action later in the game gets pretty intense.

I can’t not compare this Tron as both the visuals and soundtrack pay homage to those Movies & TV series.  While in no way are the visuals here crazy detailed, they do the job nicely. With a background made out of blue outlined shapes stuck together to form mountains and buildings, along with some great lighting effects when you or the enemy scores; the overall vibe I here is fun.  The soundtrack is a mix of modern and 80’s synth with some guitar heavy tracks to spice things up.  It all fits great with the gameplay.  The one issue I had with the audio is that the enemy voices were too quiet and distorted and I missed half the taunts they were spouting.

There are a few modes available here though they all kind of play the same. Campaign which has you facing a robot who gets steadily harder the further you progress; only 5 stages I think with the winner being the first to 3 points. The other modes are Zen where you just play by yourself hitting the ball against a wall, Score Attack which has you trying to get as many points as fast as you can with 3 lives, and finally Endurance where the goal is to progress and last as long as possible.  All of these stages are offered with multiple difficulty options (excluding Zen mode) and offer local and world leaderboards as the main reason to keep playing, besides the fun anyways. 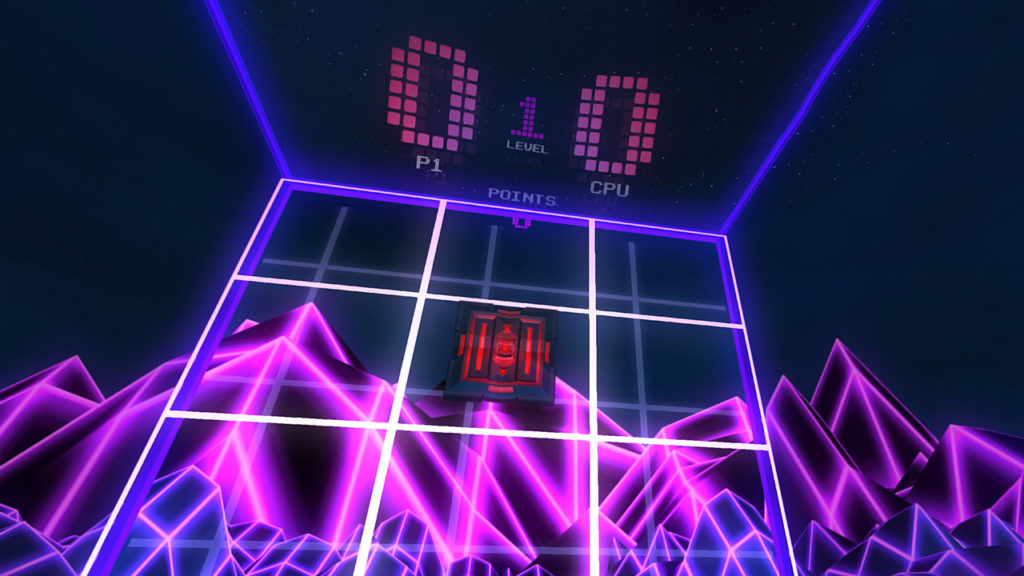 Your nemesis….your gonna hate this guy!

Another welcome addition to this game is “Spectator Mode” which allows a 2nd player to pick up a Dual Shock controller and watch the game from a few different points of view or actually take control of the AI, becoming a 1 vs 1 local multiplayer game.  Its awesome and turns this into a party game.  The one downside is that this is the only multiplayer option.  It would have been a nice addition if this was available online as well, though given the games mechanics I don’t think both players could be in VR.

This game is blast and the challenge to best your score or place yourself on the leaderboards will have you clamouring for more.  I would have liked a more fleshed out campaign mode as it really feels no different from the other modes available, but I can’t deny the fun here.  The added local multiplayer is also a nice little bonus and allows you to share with others.  Everything here works almost flawlessly and it’s hard to ask for much more

What would I pay? $15US, the asking price here is definitely worth it.  While this does rely on only a few modes and a lot of replayability, it is still an absolute blast and worth getting for the full price when you compare it to the other VR games and experiences that are charging the same, if not more.