Well, it’s here.  What has been unofficially labelled as the first AAA title to hit virtual reality has finally released exclusively in VR for the PSVR, and later on this year for its PC counterparts.  It hearkens back to the Resident Evil’s of old(pre RE4) and brings the franchise back to its roots, though that may not be everybody’s cup of tea.  For the purposes of this review, I played this entirely in VR and will review the content as such. 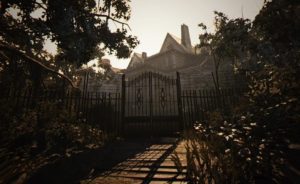 I’m gonna have nightmares about this place for sure!

If you crave suspense in your gaming, then stop reading this and purchase this ASAP.  Without ruining too much of the story, you play as Ethan, a man looking for his wife who went missing a few years back.  A message from her sends you to Louisiana and a dilapidated house and so the story unfolds.  At the beginning you would be hard pressed to identify this as an RE title as it plays more like suspenseful exploration game similar to Here They Lie.  After the 1st act though, things begin to fall in place with the story unfolding into a classic RE tale.  Freaky weirdo’s, insane characters and creepy monsters all show their faces (or lack thereof) making sure you remember that this is the next part in the game series.

Controls are handled like many FPS games in VR using the pie-chart turning style with a 180 degree turn button, otherwise traditional controller mechanics are used with the triggers for combat and the other buttons to bring up menu options and interact with the environment. No move support here, and in this case, that’s probably a good thing. In VR though, thankfully, where you look is where you shoot which makes hitting enemies a little easier.  Throughout the game you’ll find items to pick up, some just to look at and read, while others will be added to your inventory for use in the future.

When I say this hearkens back to the first few RE games, I mean it.  Back are the limited carrying capacity, universal storage lockers, and sparse save points that made the franchise the behemoth that it is today.  However, there is reason why Capcom has steered away from those tropes and while I welcome their return, some may feel otherwise.  What all of this means is you have to make important choices…all the time.  Do you bring extra ammo or health? What about a bigger gun, or should I keep this unknown item in case you find out where it goes? Do I have enough space if I find important items?  With all the suspense this game constantly throws at you, all of these choices just add to it, and it’s great.

The visuals here are top notch and some of the best available in VR.  I will say that the resolution does take a noteable hit in VR(duh), but even with that loss, it still looks amazing!  The environments look phenomenal.  The interiors are beautiful, in their own morbid way, with a tonne of details that just makes these areas feel lived in and alive.  The outside areas look a little less real, not bad, but invisible walls and foliage that doesn’t move with you just kind of remind you this is a game. Oh and the gore, oh the gore.  It is delightfully disgusting and designed to unsettle even those with the most hardened of stomachs. The character models here are also damned fine with people being very animated and very detailed.  This is especially apparent in VR when situations and people get in your face.

These moments are great, just be careful not to move your head too much during these cut scenes.  These pre-determined moments rely on your head being still while the action unfolds around you, and moving in any significant way will have you clipping into items near your face, compromising immersion.  With that said, those events will have reeling back in horror, disgust or terror, so more often than not you’ll be adjusting your head to put yourself back in position to enjoy what’s going to happen next.  The only other notable visual flaw is that some in-game videos, while still taking place in first person, change to a cinematic mode, like you are looking at a movie screen.  The shift to and from this just plain sucks, and it’s too bad Capcom didn’t make these scenes VR compatible.

3 difficulty options are readily available (I played on normal) and you will die regardless.  Boss battles especially can be overwhelming and confusing.  Thankfully there is a checkpoint system in place here as well so death shouldn’t have you starting back to far from where you died.  Upon death the loading screen gives you some clues to help you in situation where you died.  Trial and error is at play here, but tough out these challenges and you will find the solution and progress.  Its harrowing to say the least, but fun, and thankfully your roster of weapons increases beyond a pistol, and the extra firepower does make you feel a little safer.

The audio here also adds to the intensity.  Headphones are a must.  Every creak in the floorboards, groan from a monster and clattering shutter had me whipping my gun in all directions, just to breathe a sigh of relief when I realized it was only my own paranoia.  The music (when there is music) only adds the suspense fitting perfectly with the action unfolding before you.  The voice acting as well is awesome and had me enjoying every scripted scene I watched.

My major complaints about this game are as follows.  It’s a linear game, though it does try and make you feel like its not.  Locked door, invisible walls(not a lot) and triggered events all steer you in one direction.  Boxes blocking your path will disappear once you meet a character.  Passages that were unseen, will now be open after you a view a cut scene.  I found it best to explore things in the order I found them, trying to get ahead of myself just ruined the fun of exploration.  It can also be very dark in VR, and with no option to increase brightness within the headset, I was left staring a few darkened rooms where I couldn’t see anything but black.  Your foot steps make a lot of noise, too much, and I constantly thought that my steps were someone else’s, due to the fact that the sound effect behind them continued after I stopped moving.  All of these are minor, but they did bug me a little. 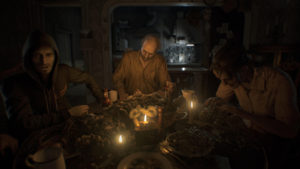 You are going to hate every member of this twisted family.

I can’t stress enough that this is not an action game.  This is a survival game.  In total, this game should take you anywhere between 10 and 15 hours depending upon your play style, and courage.  The story here will suck you in and have you clamoring to figure out what’s going on how you are going to escape from this madness. Though some enemies get predictable in their appearance, the suspense holds up for a majority of the game and you may just need a break to calm your nerves.  It really is one of the most intense game experiences I have ever played.  I miss the convoluted puzzles of old, but with those not here the puzzles are more streamlined and simple, making what back tracking is here feel less tedious than previous titles.

Did Capcom deliver on they hype? I’d have to say emphatically yes.  Excluding my few gripes, and the continual lack of classic Zombies, what’s here is amazing and I hope more titles follow suit.  This is a AAA title worthy of anyone’s VR collection, and as long as your not adverse to intense, scary and gory gameplay than you need to pick this up.

What would I pay? $59.99 US is perfectly fine.  It’s a full game deserving of a full price.  It plays on past franchise tropes while merging it perfectly modern day play styles.