ALTDEUS: Beyond Chronos is the follow up title to 2019’s Tokyo Chronos, and while the titles may share a similar name, this is not a true sequel as it does take place in the same universe, but set hundreds of years in the future and has no ties to the original…at least as far as I can tell.  In this future Earth, the world has been decimated by Meteora, an alien life form that has devastated the planets surface, forcing what remains of humanity to live in the subterranean cities from which they fight against the monstrous creatures with giant mechs called Makhia that venture out to the surface.  You play as Chloe, an artificial human, who has been fighting the Meteora but has suffered a tragic loss that has not only affected her but has greater ramifications than anyone could have imagined. 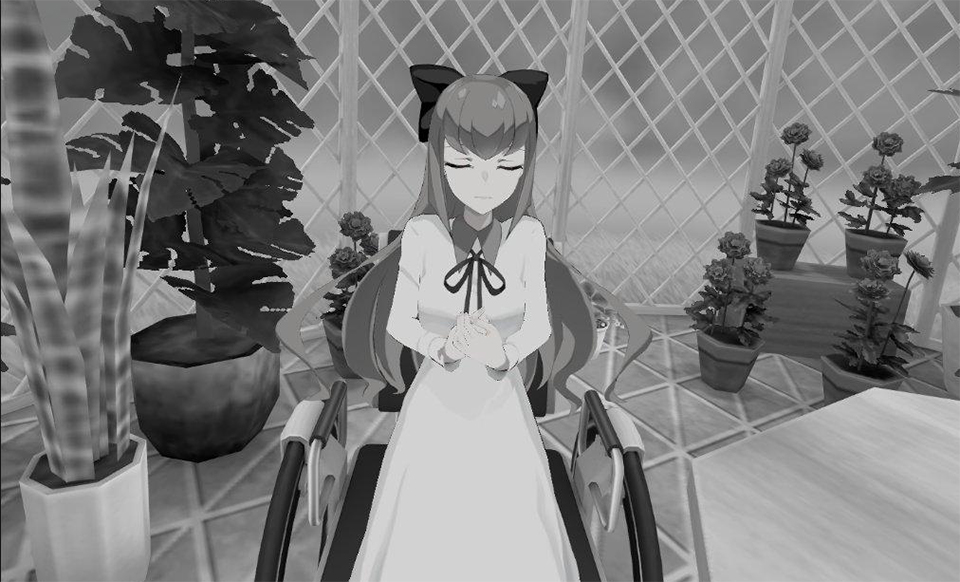 It all centres around Coco’s death

As this is a virtual VR novel, there’s not a lot to work with regards to controls as most of the game is just listening or reading along with the story as it unfolds before your eyes.  That said, there is more to do in here than you might expect thanks to some lighter interaction with some environments and the mech battles that require you to perform some basic motions to line up attacks and while these moments are often brief, they break up the narrative nicely.  You’ll still have to button press through lengthy conversations but now you can make a lot more choices using the games ‘Libra’ system with some morale consequences as you choose sides in conflicts or just create your own narrative by making some selfish or selfless acts with potentially heavy consequences.  Complimentary to the Libra system is the Ariadne system which lets you revisit any choice you made in the game and choose a different one.  That allows for entirely new story paths that reveal more about the world, the characters and could lead to one of the many endings this game has.  Therein lies the drive to play this again and again as to fully play through this, you’ll have to replay the story over and over in a choose your adventure type game just to see what may or may not happen. 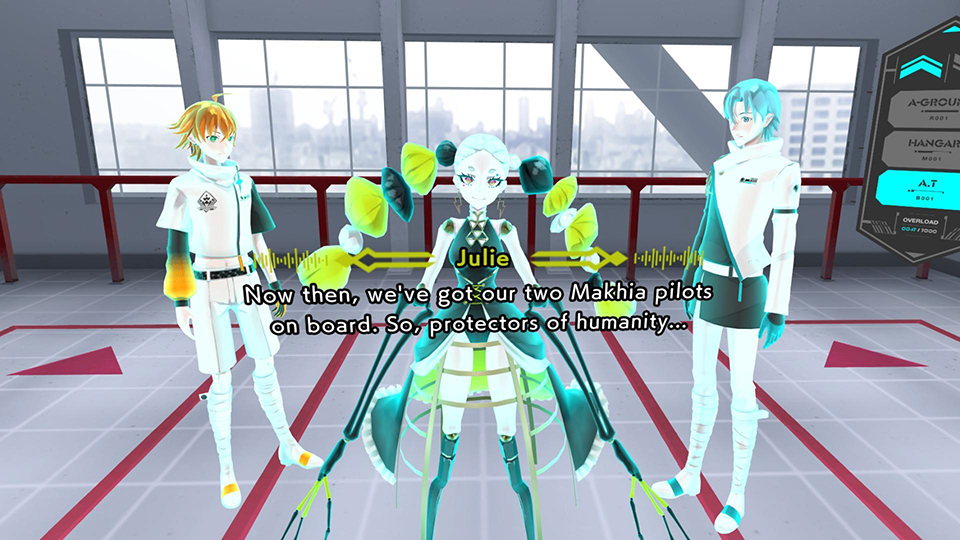 Sit back, relax and enjoy the conversation

Altdeus looks pretty slick with a large focus being on the characters who looked ripped right from your favourite anime and while most of the people you interact with are human militia types, you’ll be at odds with a cyborg named Professor Julie with some insane looking appendages as well the AI hologram Noa who is also along for the journey assisting in your control of the mechs.  Some of the settings you find yourself in can look a little drab and low resolution, especially the stuff in the distance though this is only apparent during a couple the areas with most looking smaller and thus better.  When in conversation, NPC’s will remain pretty much motionless save for their mouths, which animate perfectly, and the occasional subtle movements but most of the time, those characters will fade in and out into new poses as they continue talking to you.  There are a few moments when you’ll be doing more than talking as you interact with a few items scattered around a room or when you head to battle and take control of the mech as you try and defeat the Meteora, large orb like creatures that launch a dark energy at you.  A few other epic moments in the latter half of the story look great, the majority of this game is all about those closer interactions and you’ll spend a lot of time in smaller rooms listening to yourself and all the characters around you chatting it up but, given the nature of the genre, it all works quite well and even provides some nice surprises.

Thankfully, the entire script has been translated to English so unless you want too (and you might) you can sit back and enjoy the unfolding story without having to read tons of dialogue, an issue that plagued Tokyo Chronos.  The voice acting is, for the most, on point though of course some of the characters can come off as either wooden or over-the-top but, once again, that’s on par for the genre.  Some great 3D audio is in place so when someone is behind you or on your sides, it sounds like it, making it easy to turn to see who’s chatting things up with the larger effects during the battles doing a fine enough job though these can sometimes sound a tad muted.  Still, minus the issues I’ll address below, the audio presentation and full English translation was a nice surprise and made enjoying the story way easier. 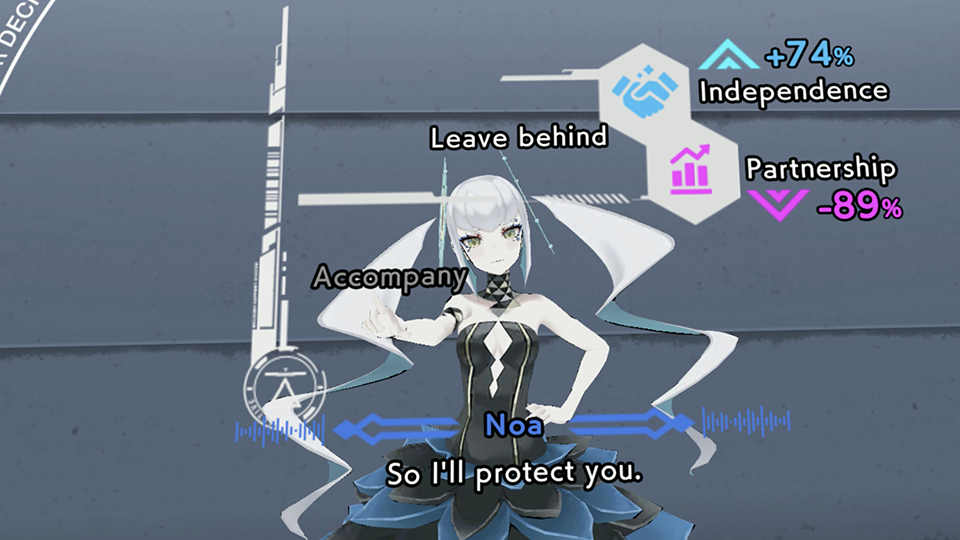 Some choices matter much more than others

My largest issue with the game comes when playing without scrolling text in that it can often times be near impossible to tell the difference between a dramatic pause and the end of that dialogue leaving me either accidentally cutting someone off as they are about to deliver their next line or waiting impatiently to see if they are going to continue while no one speaks.  Due to this, I ended up turning on subtitles as that made it much easier to see when these conversation prompts were happening though I still jumped the gun on moving conversations forward when they weren’t quite done talking.  You can turn-auto play on, so it plays cinematically, but after any Libra choice, that option resets back to default, forcing you to turn it on multiple times. I also found some of the dialogue to be a tad repetitious with multiple characters repeating the same plot points over and over to a point where I was rolling my eyes when conversations would just circle a singular idea for an entire 10-minute conversation that could’ve taken 1/4 of the time.  That is sort of the name of the game with the genre and while it was a little tedious at moments on my 1st go, once you beat the game the 1st time, you can skip just about any part of the game on your subsequent plays. The replay factor is high as it’s based upon the choices you have made throughout the story, taking sides or just going along with one character or another in order to reveal one of the many endings. 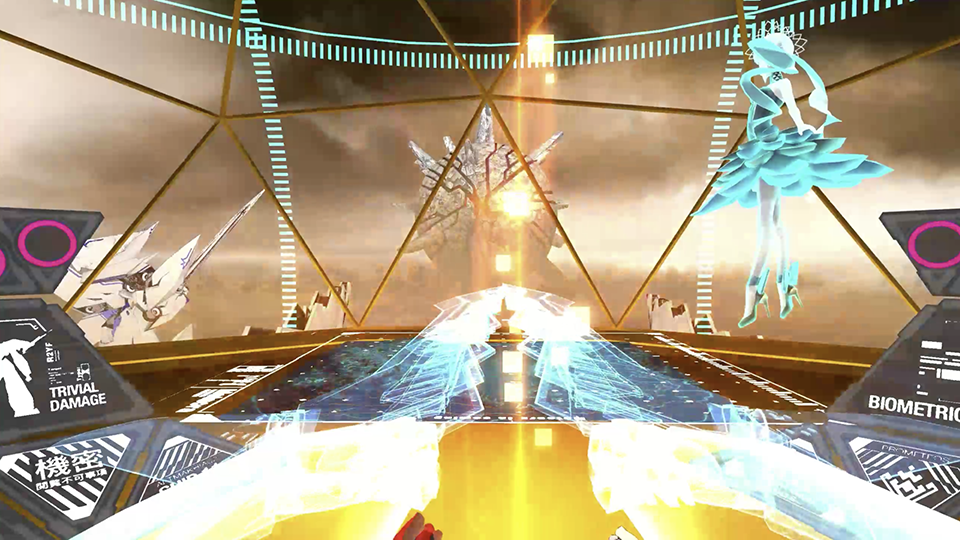 I appreciate the extra efforts made in giving the VR player something to do besides just listening to people talk and I’m sure you know if this is for you or not simply based upon the genre.  My 1st hour in this was nothing short of confusing as the game just throws you in with no backstory and tosses a lot of information at you, which was nothing short of overwhelming and did turn me off playing again right away.  Once I dove back in and completed the game and unlocked those new conversation options though, the drive to return just to see what might happen pulled me in for a few more goes.  The story may be a little shorter than Tokyo Chronos, roughly 3 hors or so, but that replay factor extends the game time exponentially making for an experience that will take 10 or more hours of your time before you put it down.

What would I pay? This is $30 US and worth it, assuming you have an interest in the genre.  It’s superior to its predecessor in almost every way and I appreciated the sci-fi aspects it…once I started to get a little more familiar with the universe.

My Dearest Inc. provided the VR GRid with a code for this title and, regardless of this review, we thank them for that!