I’m still trying to wrap my head around the whole Virtual Novel idea as it just seems like a weird way to read and/or watch a story unfold.  Tokyo Chronos has you in the role of Kyosuke Sakurai, a high school student who wakes up in the “Chronos World”, an empty, deserted version Shibuya city.  As Kyosuke, you must unravel the mysteries of your arrival in this strange desolate world and try and escape it. 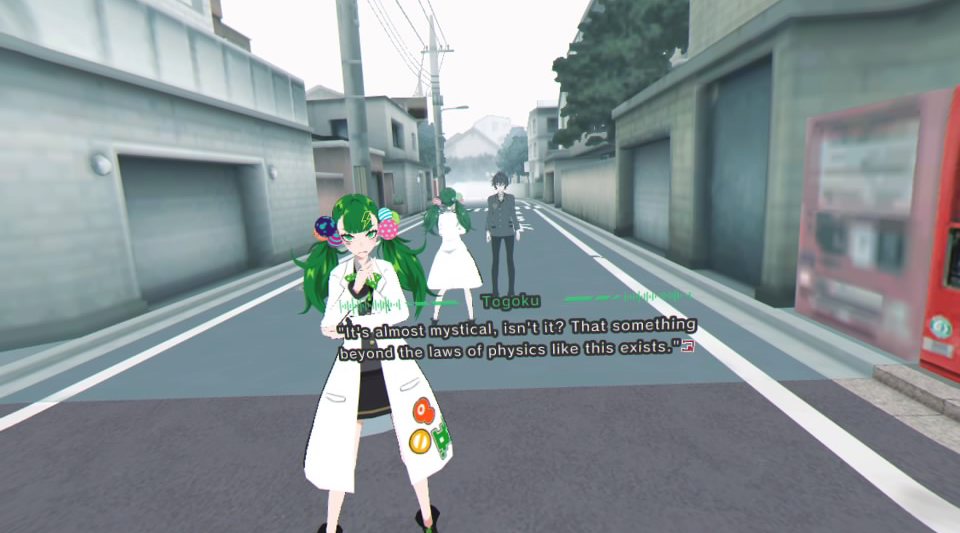 The mirror wall is only one of may mysteries in this story.

DS4 or a single Move controller is supported with each playing identically as you only need to navigate menu’s and scroll through floating text.  Whether it’s dream sequences or reality, the entirety of this story is told through the eyes of Kyosuke and consists of watching him interact with the few people who have ended up in the Chronos World with him.  The script has been localized rather well when compared to similar titles with my largest issue being that the original dialogue is the only option to view this, which means unless you speak Japanese, you’re going to have to read a ton.  I didn’t expect it to be in English, but as we seem to be seeing more and more of these titles pop up in our stores, it would be nice to see them localized a little more thoroughly.  Regardless, the game is broken up into Chapters and you can save at any time you want so if you can only handle reading in VR for 2 min or 2 hours, you’ll be able to progress at your own pace. 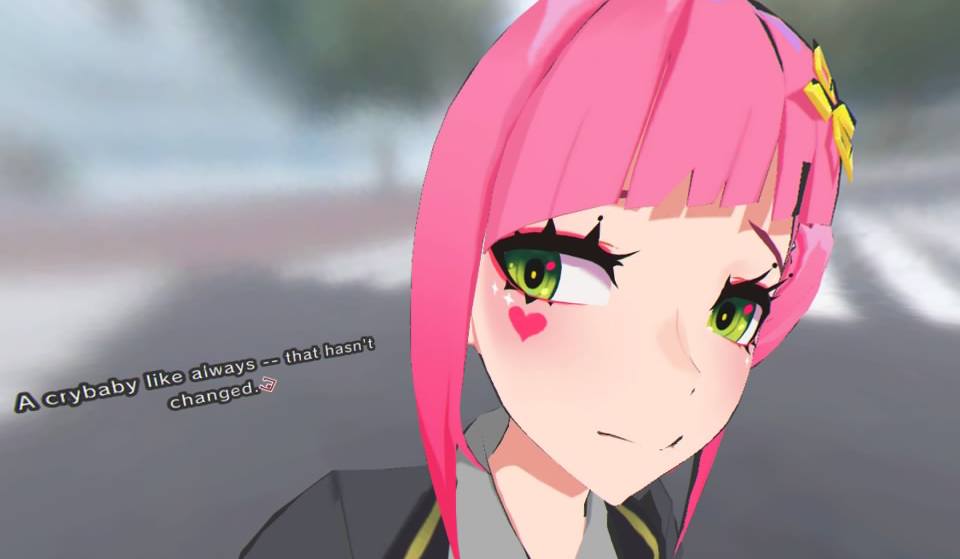 Get up close and personal during a few scenes.

Tokyo Chronos looks great in the headset, but it’s the Virtual Novel game type which detracts from the overall story.  A few cut-scenes are fully animated which is nice, but the majority of the game has you staring at nearly inanimate characters on a 3D background.  The characters aren’t entirely still as their mouths move to the dialogue, but any kind of movement or body change is handled by that character fading out and into existence in his or her new position.  This ends up feeling like I’m reading through large conversations from a 90’s era RPG.   All of the action typically happens 180 degrees in front of you though the environments are fully realized and surround your view.  Each scene has you stationary in one location for an extended period of time but as this is a roughly 15 hour game, you will visit a few locales, some of which have been taken from the real world Shibuya city, which I thought was a nice touch.  The characters have a detailed, cell-shaded look with the backgrounds looking a little more realistic, but having a slightly cartoonish flare and overall, given the nature of this game, I thought the presentation was alright minus the lack of animation on the characters.

The audio is fine for what it is, but I like I said, all the performances are still the original Japanese speaking ones and even though I can’t speak it, I thought the performances were fine, fitting with the characters and added emotion to the words I was reading.  As this is a more cinematic experience, some theatrical music peppers the game as it would in a movie, with a very upbeat pop song introducing you to all the characters you’ll meet in the game. 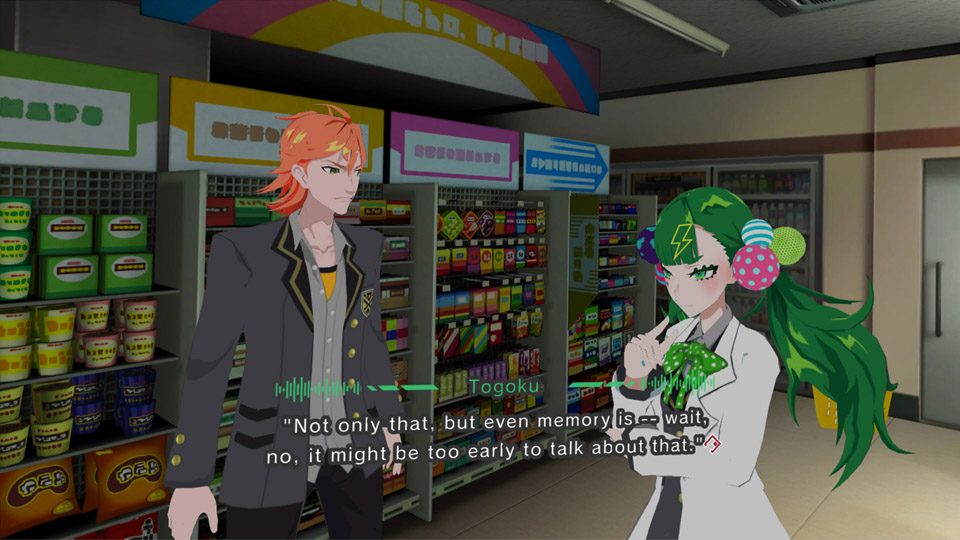 Lots and lots of reading!

Tokyo Chronos is not without its issues; the largest I think is the Virtual Novel format.  I don’t mind reading but unless you speak Japanese you will be reading endlessly as you push the story along.  By no means is that a deal-breaker but when combined with the criminally slow story telling, some sections of this title were tough to get through.  Kyosuke is involved in constant conversations, which is expected but also reflects to himself quite often, giving you tidbits of information about characters and their possible motivations.  Many conversations, both internal and external, tend to repeat plot-points making so many of these moments feel redundant and I found myself skipping though conversations that I could tell were just going to ramble and not be to significant to the story.  Given the efforts that went into the models and overall art design, I just wonder why not spend the time to fully animate them as that would have gone a long way into immersing you in this world, which, for myself, is the largest reason to put your game in VR in the 1st place.  Instead I’m left with immobile avatars I can’t understand who drag the plot along at a pace that’s just way to slow.  Lastly would be that to view the ‘true’ ending of the game, you need to play through this twice though thankfully a ‘skip scene’ option is unlocked after you beat it the first time. the 2nd run is much faster and let’s you view the story from the other characters at key plot points and offers up a few more choices to get to the games true conclusion.  I enjoyed the new revelations in these moments, but most of the new scenes really only told what I already new as I had already experienced the story once already.

While it does take way too long for the plot to ramp up, as the characters begin to unravel why exactly they are in their current plight, the supernatural story line starts to shine and adds a layer of intrigue that was largely missing from first 3/4 of the game.  All the characters you encounter are the same age as you, and are in fact childhood friends, and carry with them stereotypical traits akin with what you get from high school students from a movie.  They aren’t the most realistic caricatures you’ve ever seen, but each fill the niche needed to carry the story along. 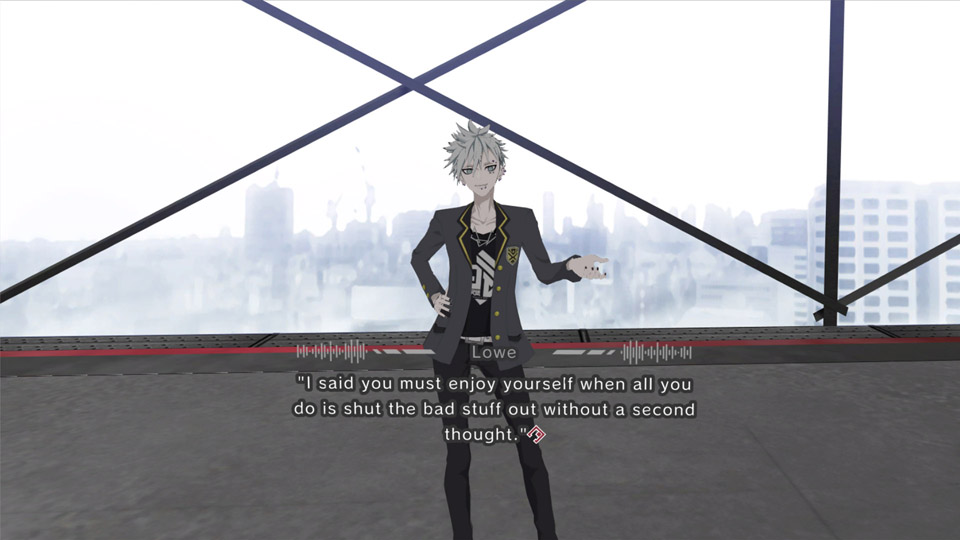 This dude is really unbearable.

I’ll say it again, I don’t quite understand where these Virtual Novel experiences fit in with our headsets, at least in their current form.  The entire time I watched this, I just kept wishing this was a more fleshed out VR film, and I don’t mean with crazy, over-the-top action sequences, but with enough animation to not constantly remind me I’m that basically watching a cartoon from the 60’s with minimal and recycled animations.  The amount of dialogue could easily be cut in half without losing any story elements and being forced to play through a 2nd time, even with the ability to skip scenes, just seems completely unnecessary.  There is a decent story here and the presentation, for a virtual novel, is fine enough but the amount of plot padding is insane and I bet many people watching this in North America will just give up before they get to the good bits, and I really can’t blame them.

What would I pay? This is $50 and that is way too much for this, even with how long it takes to get through.  If you like narrative heavy stories and don’t mind reading a ton in VR, then I’d say wait until you can nab this for $25 or less.

Sekai Project provided The VR Grif with a press code for this title and, regardless of this review, we thank them for that!