We PSVR users get our 1st official tennis game and it still amazes me that it has taken this long for this to happen.  We have other contenders in the form of Holoball, Proton Pulse and even Sparc though all those games opted for a more arcade or video game type experience.   From the makers of Rollercoaster Dreams, Dream Match Tennis looks to bring the simulation version of the sport to our headsets with a plethora of options designed to fit anyone’s preference. 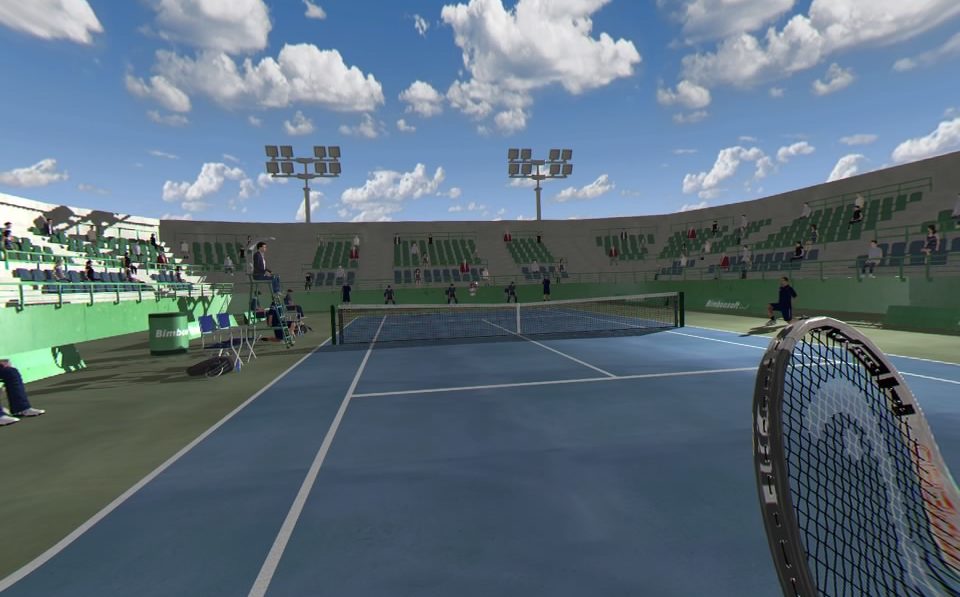 It’s Tennis in VR…and it works!

The control options in this are nuts.  Not only can you use a Move controller or DS4, but if you have a PS3 Navigation controller, this is the first game for the PSVR that officially supports that little, amazing, controller.  With the Move controller, it’s simple…swing and smack the ball.  Should you choose to play with the nav or DS4, and have the right options on, you can run around the court using the joystick on either controller while still swinging with your Move controller.  Navigating around the court on your own works, but dramatically increases the challenge and can be turned off for a simpler experience.  You can choose Auto-real mode (my preferred way to play) which has the game moving you around the court to the position needed to hit the ball or you can select the same option, with teleport, which I really disliked, that has you moving around the court with no animation and is, to me, very jarring and completely breaks immersion.  That said, if you get the sim sickness…you have options to reduce it as much as possible.

There are only a few play modes available in Dream Match; Challenge faces  you against 8 opponents from all around the world, each with their difficulty and play style.  Exhibition allows you to play a single match against one of the AI opponents from the Challenge Mode and Practice just has you facing a ball launcher and just let’s you mess around and figure out the controls.  There is also a tutorial available to learn the basics of the controls and maybe spice your gameplay a little bit with some fancy serves.  The AI each has their own behavior as far as how they play and there are difficulty modifiers ranging from ‘Baby’ to ‘Legend’ with a total of 6 different levels of challenge available making the game very easy to pick up and play for any skill level. 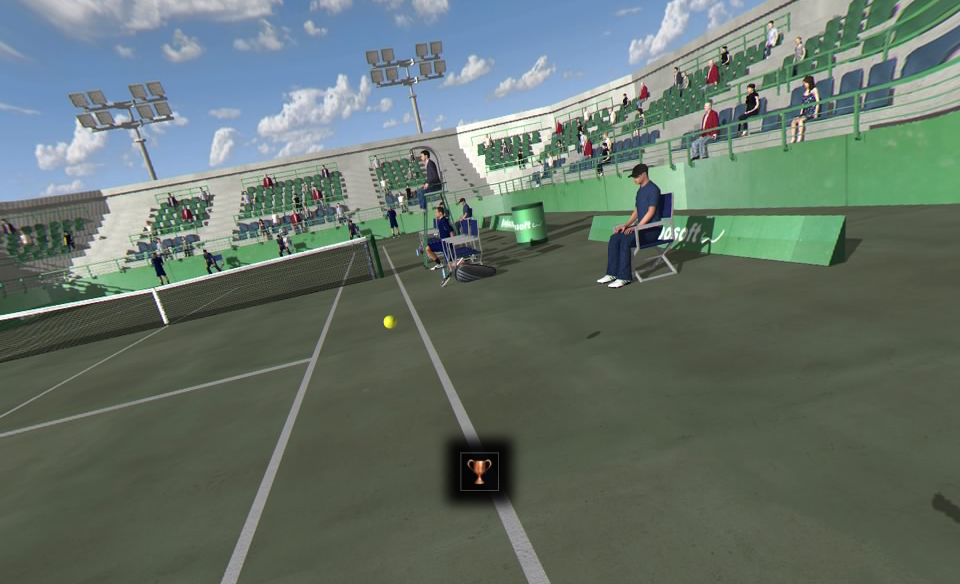 When you first start playing, it seems like you get trophies for just about anything!

Dream Match Tennis looks…not so good.  The racket you wield looks great and the robots you face, not humans, look like they were ripped right from the Diner Duo video game.  Your robot competition consists of only a head, torso and racket but look decent.  The court also looks alright and can be customized with some different textures or colors but besides that texture option, the play area remains the same.  The court and stands are littered with people who don’t have any animation to them whatsoever, making it feel like you are playing in front of mannequins and the sky background is clearly a small image that repeats itself over and over all around you.  At first glance, this looks alright, but once you notice each shortcoming, you can’t unsee it and it seems like the folks over at Bimboosoft forgot to actually finish the game, at least as far as visuals go.

The audio fairs a bit better with the announcer stating the score once points are scored and whenever a point is scored the audience claps and cheers, though the complete lack of animation hampers any kind of celebration.  Some music plays briefly before and after a match and the sound of the ball bouncing off of the court and rackets is bang on and I really can’t complain too much about the auditory department. 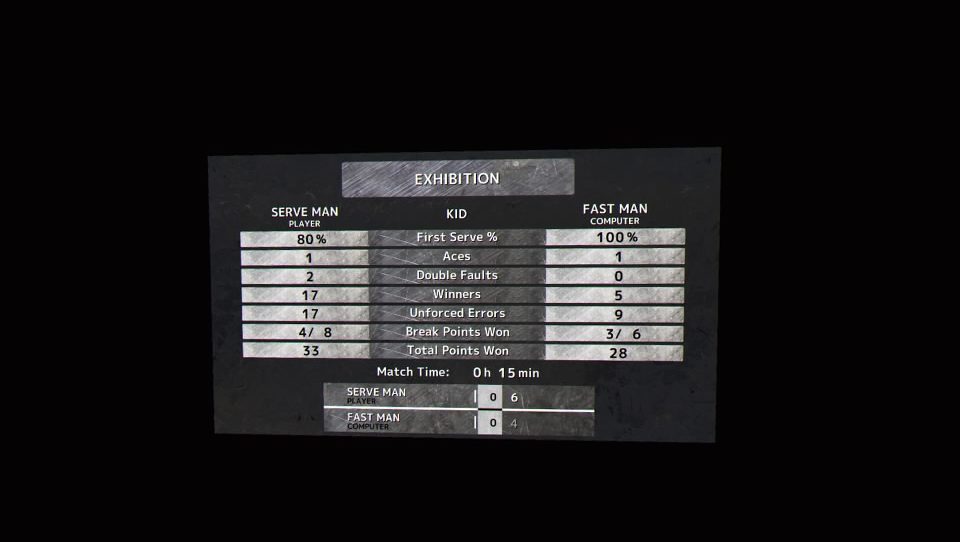 The end of each match gives you stats…who doesn’t like stats?!

The tracking can be finicky when it comes to Move tracking so make sure you are far away from camera to maximize play space.  Prompts will pop up whenever the camera loses sight of your controller, though thankfully these can be disabled and once you find that sweet spot in the real world, you shouldn’t experience any tracking issues.  I also stumbled across a few glitches which either forced me to quit to the menu or swap Move controllers as the game just decided randomly to start tracking my other controller…which was odd. The Challenge Mode takes place around the world with a loading screen stating which city you are in, but the court doesn’t change at all so the inclusion of multiple locales where none actually exist is humorous to say the least. The challenge mode does feature a save mechanic, but it is not auto-save, meaning before you quit, make sure you save the game manually or you will lose all progress.  Lastly would be the lack of multiplayer, which if this had, I would basically say you should insta-buy this game.  Given the varying control schemes, I can see where multiplayer would be difficult to implement, but the lack of it really limits the replayability. 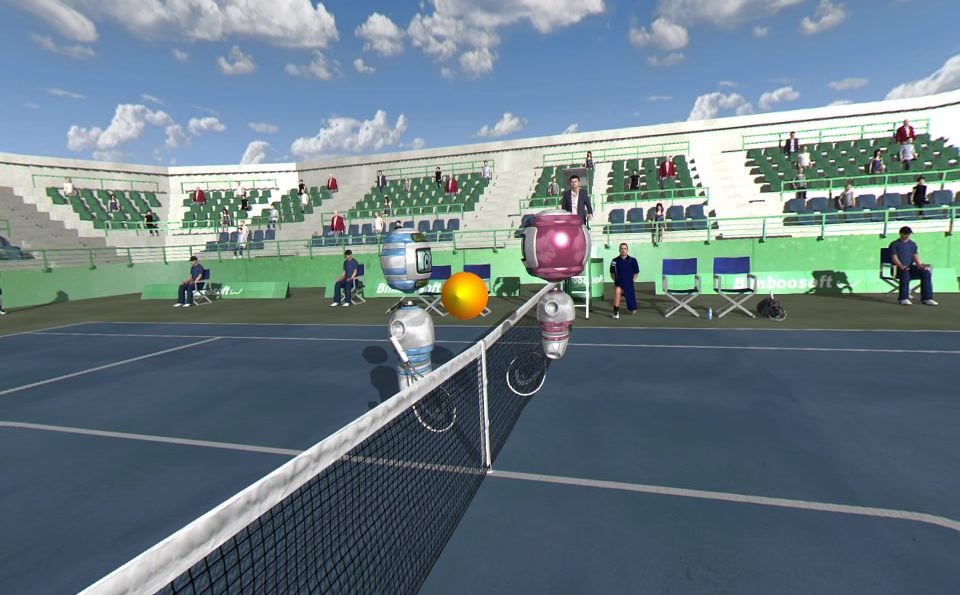 I didn’t even realize that I was also a robot until I posted this pic!

Dream Match Tennis is a bare bones simulation that nails the gameplay with some great physics and tracking and when you include the plethora of comfort and gameplay options, the game definitely gets more right then wrong.  With that said, the visuals are laughably bad at times and it’s only single-player so if you get sick of beating (or being beaten) by the AI, there isn’t to much else to do except try, try again.  I really did have a lot of fun with this game and the level of challenge offered by the harder opponents makes for some very challenging and rewarding matches.  Add in the inclusion of PS Nav controller support and you have a very solid single player tennis sim.

What would I pay?  Knock $5 off the asking price and this is an easy buy.  I feel the lack of multiplayer does hurt the game, but the fact they nailed the gameplay makes me forgive it’s many shortcomings.  If you’re dying for a tennis sim, the full price isn’t nuts…just know you’ll be playing alone.