It’s time to take to the slopes, or the pre-made jump platforms as you travel down them at intense speeds, launching yourself in the air with a bit of style and a lot more finesse.  For those who don’t know, Ski jumping is a winter sport where competitors strive for the longest jump after descending from a specially designed ramp on skis. 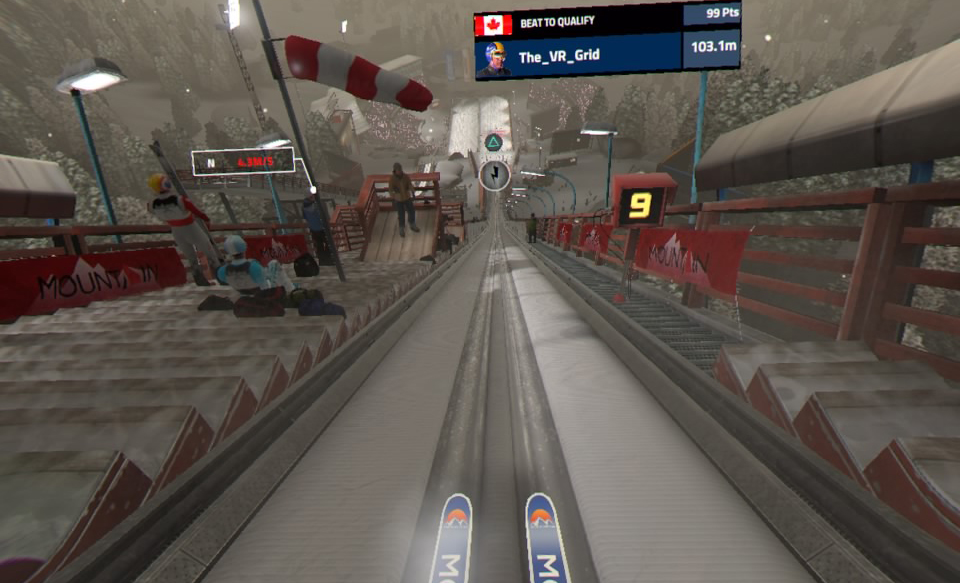 It’s a thrill from the top.

There is only one game type in here, and that’s skiing down those ramps and for simulations sake, you need 2 Move controllers to put you in the game.  The gameplay is broken into stages with the first being the launch which asks you to put your hands out and push them down as if you were pushing off something.  The second is the track where you must “balance” the move controllers to keep your head centered between the ski’s.  The 3rd step is the jump where you raise you hands above your head and once in the air you need to make a Y with your hands, spreading apart your skis and upon landing you bring your hands back together and down to land.  Once completed, judges rate your performance with a breakdown of each of those steps showcasing you timing and accuracy in the form a percentage highlighting where you screwed up where you nailed it!  You are then placed on a ranked leaderboard and depending upon your placement you might be able to make a second attempt or just move on to the next event.  The game is broken up into singles and tournament modes and includes customizations and upgrades, which affect your performance percentages, in the form of goods and sponsorships purchasable with the winnings from any race you participate in.

Each track, and there is a fair bit, all take place at unique locales from around the world and have apparently been recreated in VR from their real-life counterparts.  That diversity is great, and some tracks do look better than others thanks to some sunlit shading, snowstorms and other ambient effects, but the overall presentation factor here still feels lacking.  The original version of this game was a mobile, non-VR one and that level of visual polish is showcased here as well.  Trees are just 2D shapes, building are little more then untextured walls and roofs, the ski hill you land on is textured to look like an actual hill, but still comes of flat with the visuals getting the job done, but never going above and beyond in any way.  Something I took offence too was the lack of hands in VR meaning your only “physical” presence in the game is the ski’s below you and your frosty breath which is a blow to immersion during the initial launch section where I missed them the most.  It doesn’t look bad…well, some of it does, but there’s still enough quality to make you forget you’re in VR and allow you to focus on the gameplay.  After completing a jump, you are treated to a skippable cinematic replay which showcases your jump from a few different vantage points 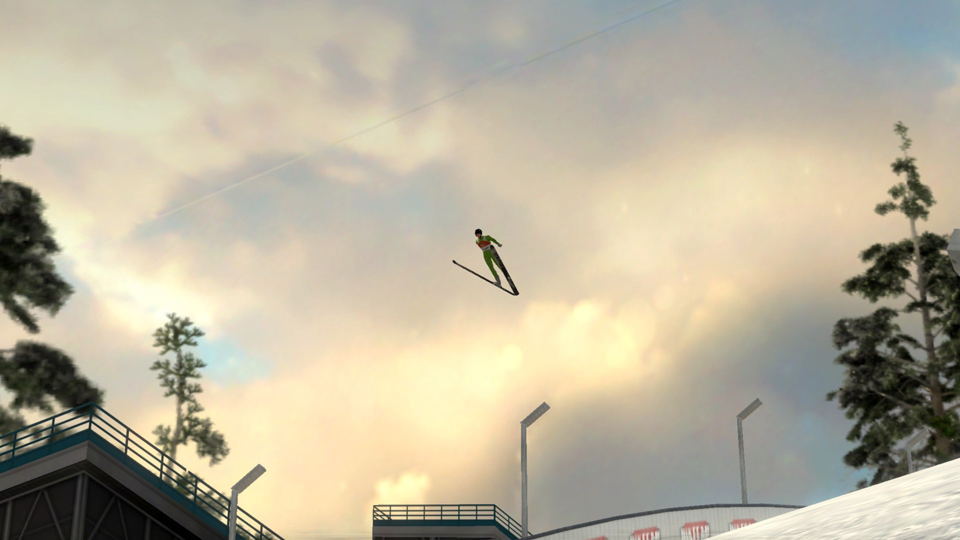 A lone music track greets you at every menu and loading screen you’ll see with the gameplay playing in realistic fashion with only the wind and noise of the crowd to accompany you. Hearing your ski’s grinding against the snow beneath you as you careen down hill at incredibly fast speeds toward the ski hill was still a treat.

The gameplay may sound monotonous and it is, but it’s also addicting as the game demands near perfection to be at the top of the leaderboards.  Every aspect of each jump feels authentic and just how short each jump is makes it all to easy to keep trying.  The game does try and get in your way with loading screens popping up between every jump and if you choose to skip those replays, you’ll end up spending more time navigating back the next jump then the jumps themselves which was off-putting to say the least.  The campaign modes also devolve into repeat plays of the same levels over and over, broken up by replays and offline leaderboards, making it a very shallow experience as there isn’t much to do besides trying to best your own scores.  That’s not to say it isn’t fun, it is, in the same way that Rush VR is, only on a much smaller scale and no multiplayer option.  There is a fair amount of equipment to buy and sponsors for more loot giving plenty of reasons to keep coming back…assuming you care about beating you previous efforts. 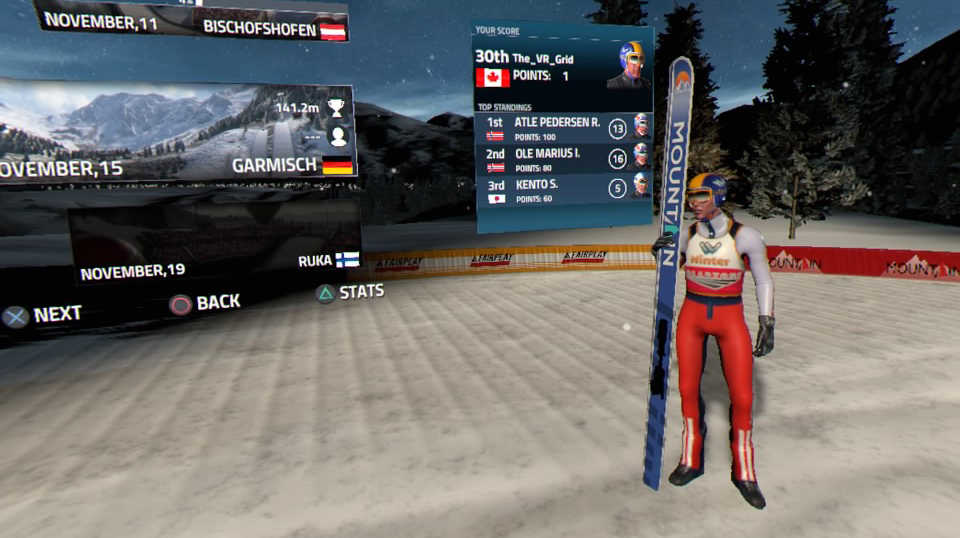 Your ranking change with every race.

As simplistic as this game can be, I had a hard time putting it down and while it’s basically just the same jump over and over in different settings, it works.  It’s a decent simulation of the sport and I think fans and non-fans of ski jumping will enjoy this as the challenge is high, but when you land a successful run, it’s pretty damned rewarding!

What would I pay?  As much as I like this, the $20 price tag on this is to high for what feels like a mode from a much larger game.  I’d say if you are interested in this, $10 is a much more appropriate price point but I gotta say, I did enjoy this more then I thought I would.

Kalypso Media provided The VR Grid with a press code for this title and, regardless of this review, we thank them for that!